Accessibility links
Iraqi Leader Accused Of Running Secret Prison A human rights group says Prime Minister Nouri al-Maliki is running his own personal combat brigade, which is overseeing a secret detention facility where men accused of terrorism and other crimes are tortured and kept incommunicado, with no access to lawyers or relatives.

A leading human rights group has released findings accusing Iraqi Prime Minister Nouri al-Maliki of running his own personal combat brigade. The group says this brigade is overseeing a secret detention facility where men accused of terrorism and other crimes are tortured and kept incommunicado, with no access to lawyers or relatives.

All this despite the fact that Maliki had promised to end such practices after similar findings last year.

The latest report by New York-based Human Rights Watch says a special unit of some 3,000 Iraqi soldiers known as Brigade 56, or the Baghdad brigade, is in charge of the secret facility.

Human Rights Watch researcher Samer Muscati says this brigade works in partnership with two other brigades. One of them was trained by U.S. Special Forces. All of them report directly to the prime minister, he says, meaning they aren't accountable to anyone else. 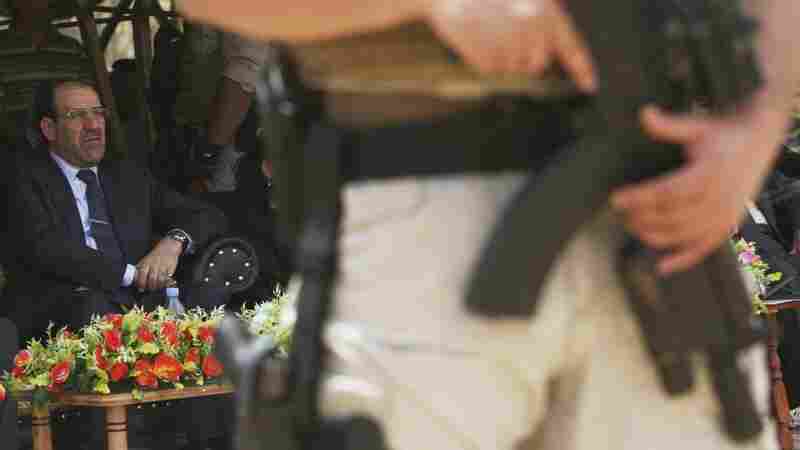 "When you have these institutions that are operating outside the rule of law, it creates a situation where there is no transparency, where forces are likely to engage in activity that is reprehensible, and there's no way to rein them in," he says.

After reviewing government documents and conducting interviews with Iraqi officials, Human Rights Watch found that the Baghdad brigade transferred these detainees to the newest secret facility in November, just as human rights inspectors were planning a visit.

Detainees at the original facility told the Los Angeles Times that conditions were appalling, that detainees were hung upside down, beaten and given electric shocks to their genitals.

Officials say these men are hard-core terrorism suspects. But Muscati says that shouldn't deprive them of all their rights.

"These are fathers, these are sons, these are people who are supposed to be innocent before a court of law," he says.

In previous statements, Maliki's office has denied Human Rights Watch's findings, claiming their reports are the work of his political enemies.

"The Parliament will check this matter, and if the findings are true, we will request that the government explain itself," he said at a press briefing.

Nujaifi's briefing was called to discuss the prime minister's efforts to exert control over the election process. But after NPR asks the question about the secret prison, two Iraqi journalists pull us aside to tell us their stories.

One man says he was imprisoned for nine months at a secret facility, without any contact with lawyers or relatives.

Another man tells us his nephew was detained for four years by the Baghdad brigade. He says the nephew was just released yesterday, after the family paid thousands of dollars in bribes.

As he whispers, the man keeps looking over his shoulder.

Um Jassim knows what it's like to lose all contact with a relative. Her son was detained back in 2007 by American soldiers, and she hasn't heard from him since. She believes he's since been transferred to Iraqi custody.

Um Jassim can't even say her son's name without falling apart. Her relatives think she's crazy because she cries all the time.

"Believe me, this is my situation, day and night, and every day, I keep on crying at home. But what can I do? I keep on going out in the streets, looking for him, here and there. But I don't find him," she says.

Um Jassim says it would be better to know something than to continue living her life in limbo. Just tell me that he's dead, she says.

"If that's my destiny, then I will accept it," she says.