Accessibility links
Food Fight: Maine Legislature Takes Up Whoopie Pies The state Legislature is poised to make the chocolate cake sandwich the official state dessert, despite claims that it did not originate in Maine. Some lawmakers support the bill, while others say the state should not promote the fatty treat when 30 percent of students there are overweight. 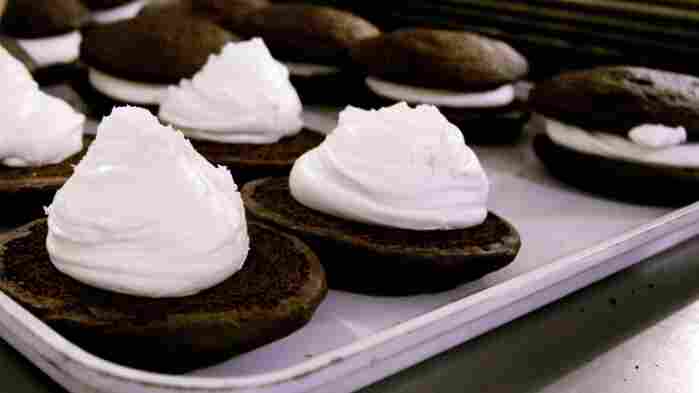 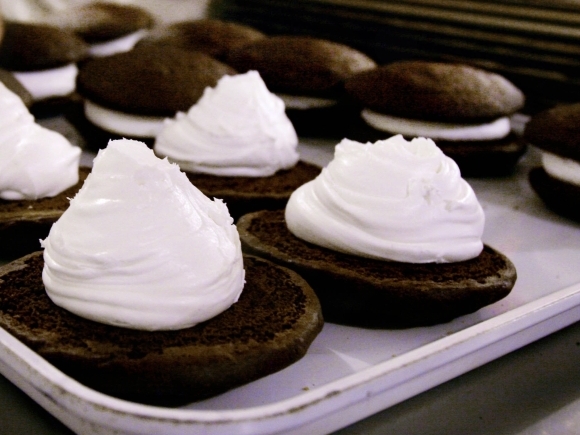 Dozens of whoopie pies are assembled at the Isamax Snacks factory in Richmond, Maine.

Budget problems aren't the only issues under debate in state legislatures this season. In Maine, lawmakers are poised to make the "whoopie pie" the official state dessert — even though some claim the chocolate cake sandwich filled with white fluffy filling was actually invented in Pennsylvania.

As far as state Rep. Paul Davis is concerned, there's nothing half-baked about his bill to make the whoopie pie the official state dessert, even if its origin is uncertain. He says no Mainer has to go far to find whoopies — "bakeries, corner stores, mom-and-pop shops, supermarkets, restaurants, lunch stands, hotels, motels, B&Bs, taverns, bars, dance halls, wherever."

Do we really want to glorify a dessert that lists lard as its primary ingredient?

As it turns out, demand for whoopie pies is up.

"Whoopie pies have been on the rise for several years, and no one can pinpoint exactly the reason," says Amos Orcutt of the Maine Whoopie Pie Association.

Orcutt first got the idea about making the snack the official state dessert from a New York Times article in which the author asserted that if the whoopie pie wasn't Maine's official dessert, it should be.

Orcutt says part of the dessert's appeal may be somewhat nostalgic.

"Perhaps they invoke home cooking [or] provide a comfort food in these difficult economic times," he said. "The whoopie pie is ... an icon that has received national recognition for its culinary appeal."

Maine legislators spent an hour-and-a-half listening to testimony about the whoopie pie. And there were competing points of view.

Rep. Don Pilon of Saco, Maine, told the committee that whoopie pies are not the dessert to promote at a time when more than 30 percent of students in the state are overweight.

"Do we really want to glorify a dessert that lists lard as its primary ingredient?" he asked.

Pilon says he thinks the wild blueberry pie should be the official state dessert, because blueberries represent a major industry there.

But it looks like the Legislature is ready to embrace the whoopie pie instead.