Accessibility links
Deep Below Antarctic Ice, Lake May Soon See Light Russian scientists on Antarctica are drilling down to reach a lake that's buried beneath more than two miles of ice. But some are concerned that rushing to explore the lake might disturb a primitive ecosystem that has been untouched for millions of years. 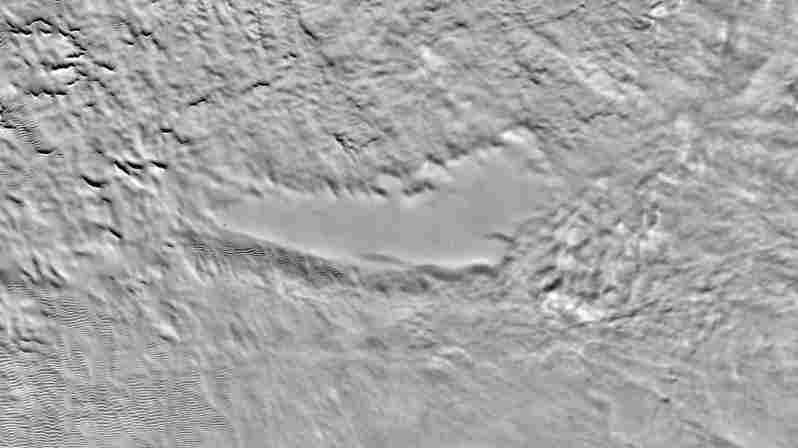 While a team of Russian scientists were drilling ice core samples from their Vostok base in Antarctica, new satellite imagery revealed the outline of a lake the size of New Jersey buried two miles underneath the ice. Scientists have been drilling through the ice and are now just 100 feet away from breaking into the third largest lake on the planet. Earth Observatory/NASA hide caption

Russian scientists are on the verge of punching a hole into a vast Antarctic lake that's buried under more than two miles of ice.

If the Russians break through, they may tap into and disturb a primitive and pristine ecosystem that has been untouched for millions of years.

Lake Vostok is actually the third largest lake in the world, measured by the amount of water it holds. And if you're surprised to learn that there could be a vast pool of liquid water under two miles of ice, so were the Soviets.

In fact, they had no idea there was a lake there when they built their Vostok camp more than 50 years ago. Robin Bell, a professor of marine geology and geophysics at Columbia University's Lamont-Doherty Earth Observatory, says the Soviets picked the spot because it was the Earth's magnetic South Pole.

"The Russians went to the magnetic South Pole in 1958 because they missed the race to the rotational South Pole," Bell says. The U.S. claimed that prime real estate.

But it turns out the south magnetic pole isn't fixed in one place — in fact, it wandered off from Camp Vostok, leaving the Soviet base seemingly in the middle of nowhere.

Undaunted, the Russians drilled down through the ice at their feet to sample tiny air bubbles trapped inside. In the early 1990s, they re-created a history of the Earth's atmosphere throughout the past 400,000 years — a record of our planet's air during the past four ice ages.

"When they got to the bottom [of the 2.2-mile-deep hole] they suddenly found this ice that didn't seem to be the same," Bell says. They found giant crystals, it was a different acidity, and there were no gas bubbles in it.

The scientists realized that this odd layer of ice was actually from the roof of an enormous lake, buried directly beneath them.

"And right about then, the satellite imagery [surveying Antarctica] came out, and you could see this area the size of New Jersey was dead flat," Bell says. That showed there was a giant lake beneath Camp Vostok.

Ever since, Russians have been dying to complete their hole into the lake.

Concerns Over Sampling The Water

"The real question is, 'Is there life in Lake Vostok?' " Bell says. If so, the life forms would be microbes. It's hard to say just how old they would be, she says.

"As I like to think of it, this lake hasn't had the wind blow across it for maybe 35 million years, but the water's changed every tens of thousands of years," she says. "So the water is relatively new. The lake is old." 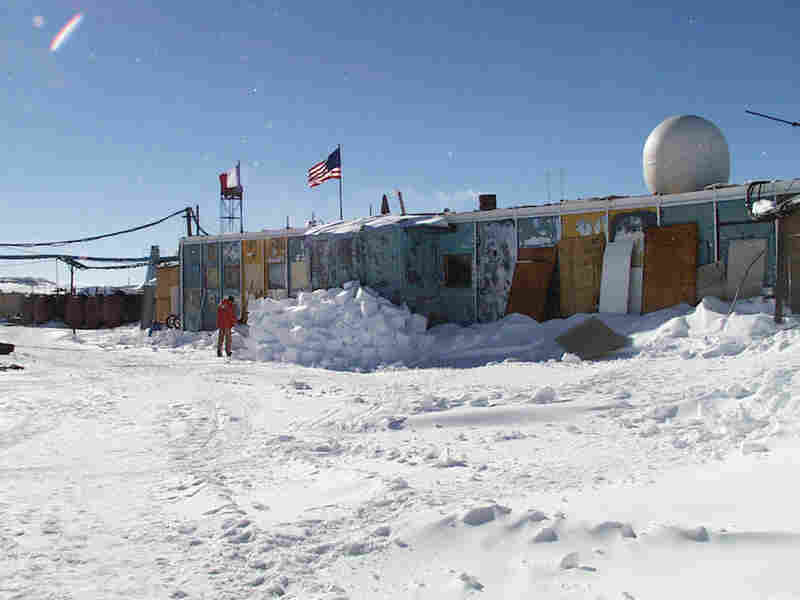 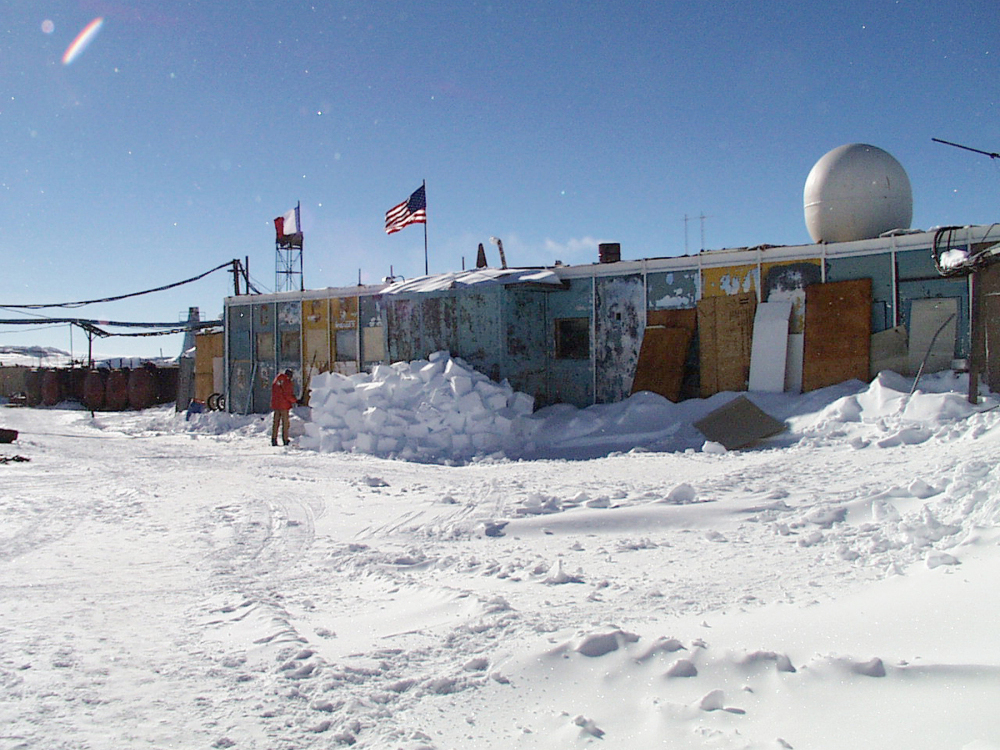 Vostok station in 1983 recorded the coldest temperature ever detected on Earth: minus 128.6 degrees Fahrenheit.

But getting a sample is no simple matter — it took Russian scientists more than a decade to come up with an acceptable plan for drilling into the lake without disturbing it, and they started drilling down again in early January.

Jim Barnes has been watching this process closely, as head of a nongovernmental organization called the Antarctic and Southern Ocean Coalition.

"Well, to be perfectly honest, we're not very happy about it," he says.

One major concern is the Russians have filled the hole they're drilling with more than 14,000 gallons of kerosene and Freon to prevent it from freezing shut. The Russians have engineered their system so that when they break through into the lake, water pressure from below is supposed to push the drilling fluids up the hole, rather than letting them pour into the lake and contaminate it.

But Barnes is nervous. He'd prefer that the Russians used more environmentally friendly drilling systems that use hot water and don't need kerosene and Freon. 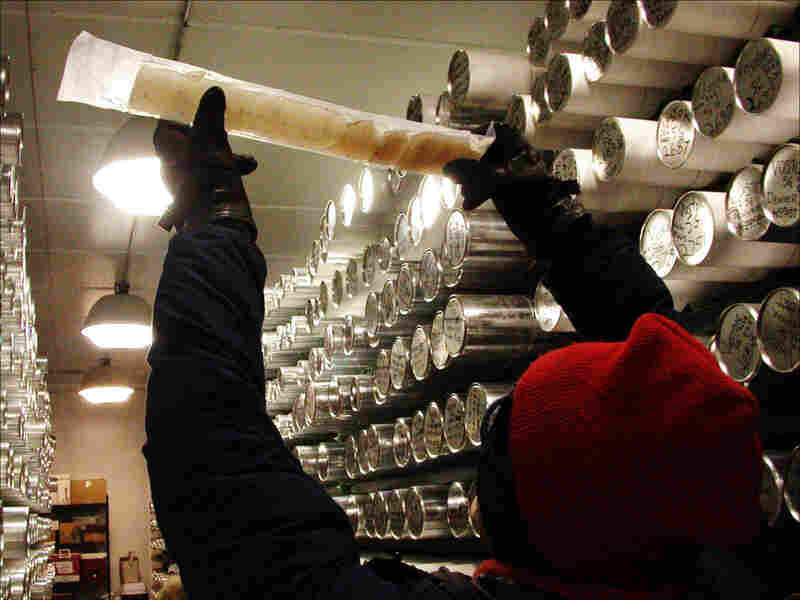 Eric Cravens, assistant curator at the National Ice Core Laboratory in Littleton, Colo., holds up a piece of ice taken from above Lake Vostok, a remote region of Antarctica. The ice offers a glance at hundreds of thousands of years of geologic history. Melanie Conner/National Science Foundation hide caption 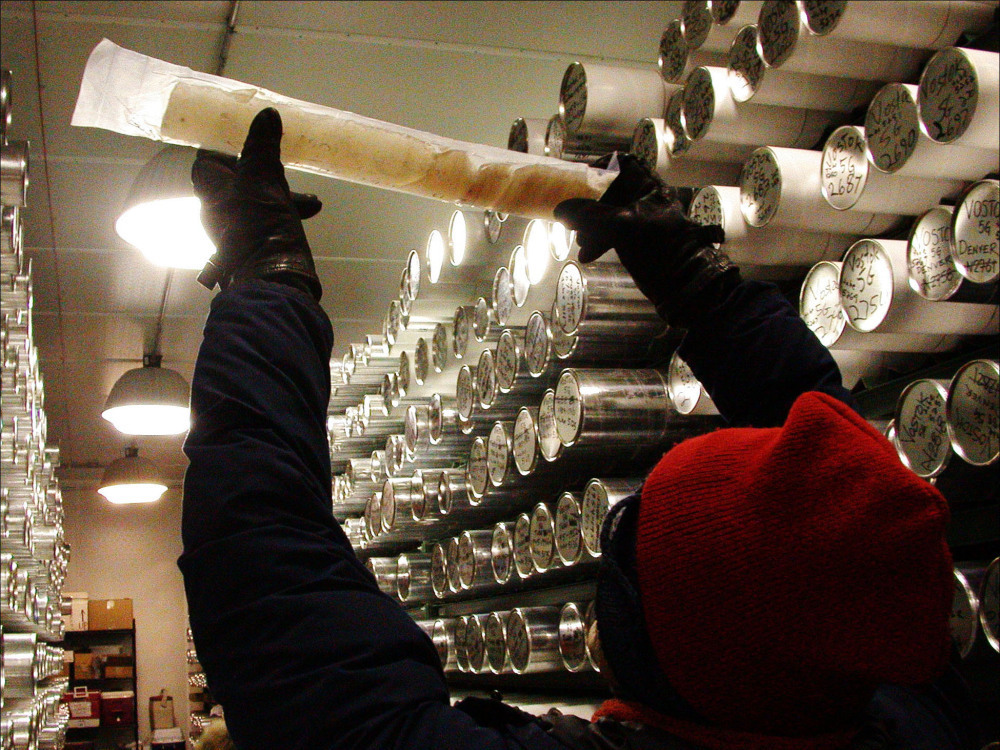 Eric Cravens, assistant curator at the National Ice Core Laboratory in Littleton, Colo., holds up a piece of ice taken from above Lake Vostok, a remote region of Antarctica. The ice offers a glance at hundreds of thousands of years of geologic history.

'They Want To Do It Right'

Another worry is that the lake water could come rushing up the hole. John Priscu, a professor of ecology at Montana State University, says the water in the lake is gassy, and if the Russians aren't careful, the lake water would spew out like a shaken bottle of soda.

"That would be a very bad thing," Priscu says. "You'd geyser out the top, and you'd drain the lake into the atmosphere. There's 5,400 cubic kilometers of water into the lake, [and] it would just keep blasting out until it degassed."

Priscu isn't expecting a disaster, but if there is one, he says it could set back plans by U.S. scientists — himself included — and British scientists, to drill into two other buried Antarctic lakes in the coming years.

Robin Bell from Lamont-Doherty says it's a matter of Russian pride to get this right.

"They didn't get to the moon first, they really, really want to be the first people to drill into a subglacial lake," she says." And they want to do it right."

And this story is probably going to end as a cliffhanger for now — the head of the Russian program told NPR on Wednesday that they have about 100 feet left to drill. That's not much, but this cold place is about to turn even colder as the seasons change. So the drilling crew needs to fly out on Sunday, and they're unlikely to be done by then.