Accessibility links
Two Titian Masterpieces Traveling Through U.S. Two Titian masterpieces — Diana and Actaeon and Diana and Callisto — are in the United States for the first time. Fresh Air's Lloyd Schwartz says art lovers will want to see them in person — particularly because there's a chance they may be permanently separated. 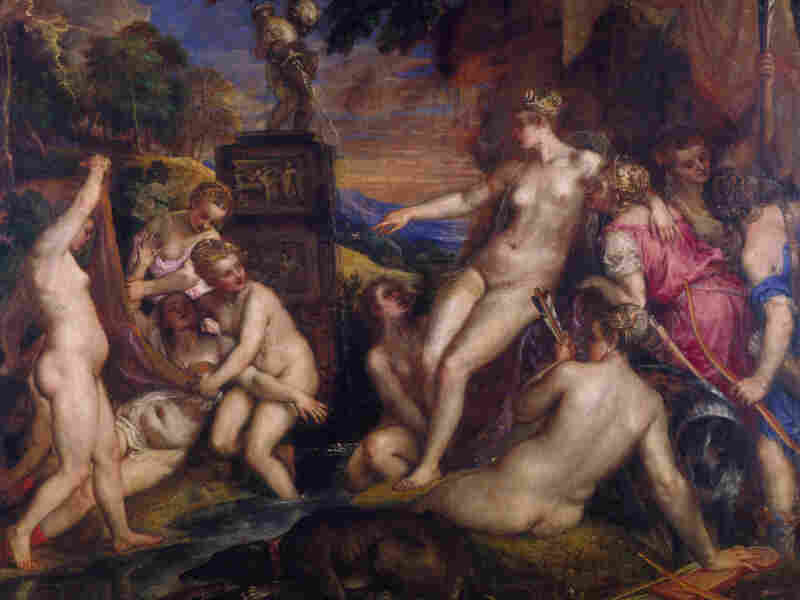 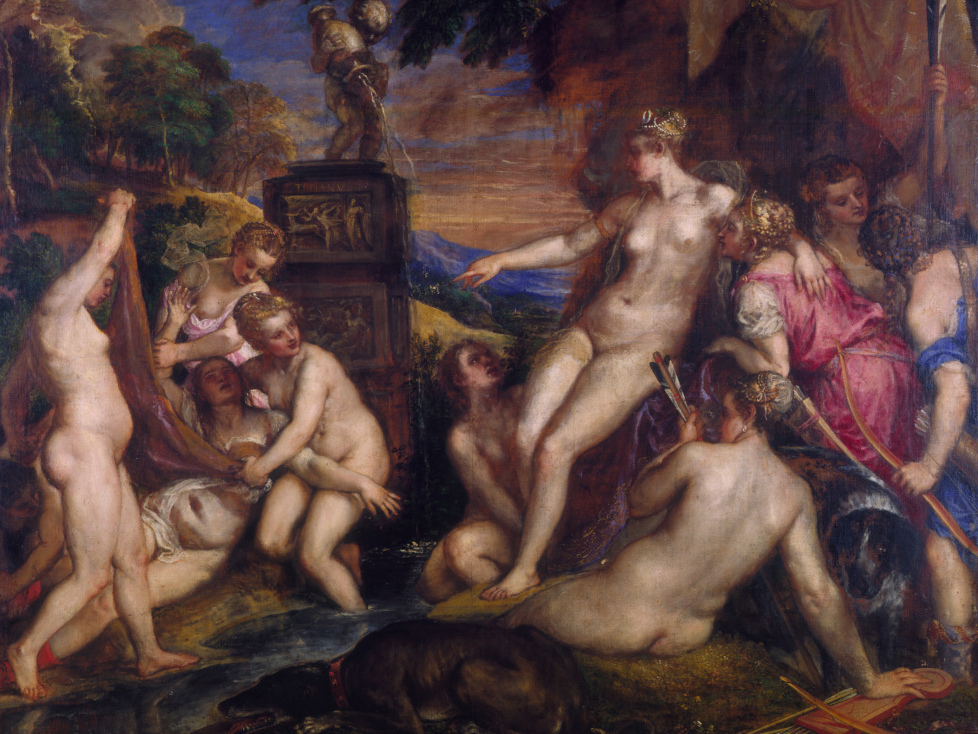 The Renaissance master Titian was a painter's painter — a pure painter, not also a sculptor or an architect or scientist, like Michelangelo or Leonardo. He created his ravishing images — often sexual, sometimes tragic — by pushing paint over a canvas, sometimes very large canvases, at a time when painting on canvas was still pretty new.

Right now, two of Titian's very greatest paintings — Diana and Actaeon and Diana and Callisto — are in the United States for the first time. They're in a traveling show of Venetian masterpieces from the National Gallery of Scotland, which began last fall at the High Museum of Art in Atlanta. They'll be in Minneapolis at the Minneapolis Institute of Arts until May 1 and then they'll go to Houston.

One reason I felt it was urgent to see them is that these two grand paintings are companion pieces, and there's a chance they may be permanently separated. The National Gallery of Scotland has had them on longtime loan from the Duke of Sutherland, but the duke now wants to sell them. The National Galleries of Scotland and London have raised enough money to buy one of them, at a good price, and they'll share ownership.

But if they don't meet the looming deadline, the second painting could be sold at public auction, and probably at a price higher than most museums could afford. Paintings of this caliber and historic significance rarely come up for auction, and much lesser paintings have sold for staggering amounts.

And these paintings are particularly special. In the 1550s, King Philip II of Spain commissioned Titian to paint a series of large canvases based on mythological subjects. The king seems to have had a healthy libido, and Titian had his number; the two canvases are crowded with some of Titian's most voluptuous nudes. And now that I've seen them, I can testify that even more than with most paintings, reproductions do these no justice.

They are radiant — luminous with rich reds and golds, pearl and creamy flesh tones. And they're extraordinarily moving, even scary. In Diana and Actaeon, the painting on the left in the exhibit — and the curators are pretty sure this is how they were intended to be hung — the young hunter Actaeon has stumbled upon the goddess Diana bathing at a fountain with her nymphs. He's at least as startled and as terrified as they are. Diana gives him a bone-chilling look. She's about to turn him into a stag, and the big, eager dogs that are his hunting companions will soon turn on him and tear him to pieces.

In the far distance, in a mysteriously shimmering landscape, we can just barely make out a tiny figure — maybe Diana herself — chasing a stag. On top of a pillar in the grotto where the nymphs are bathing, there's a stag's skull, and weird deerskins hang from nearby trees. The ominous present shares the canvas with its catastrophic aftermath. "All time is eternally present," to quote T.S. Eliot's Four Quartets. 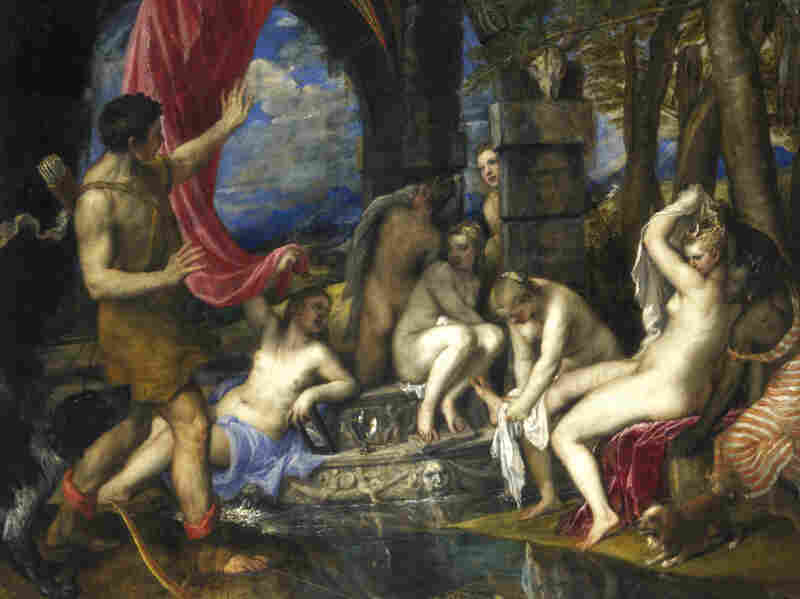 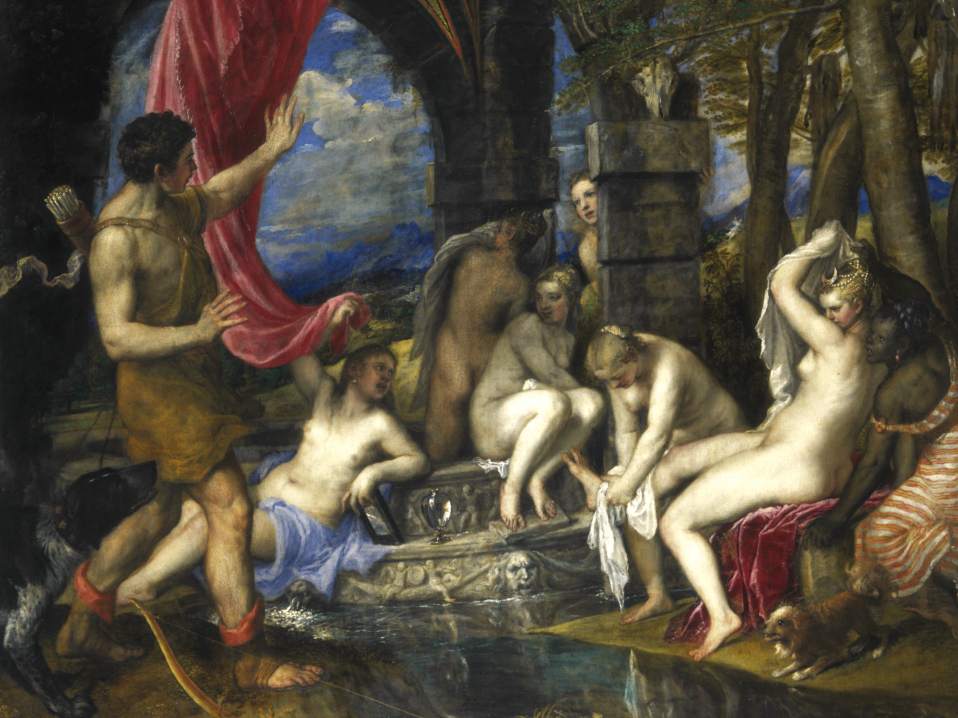 The companion painting Diana and Callisto is equally disturbing. Jupiter has fallen in love with Diana's nymph Callisto and raped her. She has tried to hide her pregnancy from Diana, who is not only a huntress but also the goddess of chastity. In Titian's painting, because Callisto has refused to bathe with her companions, her sister nymphs are violently ripping off her clothes, while Diana watches imperiously. We see Callisto's swollen belly, and if we look close, we can see a small tear trickling down her cheek. It's one of the most poignant dabs of paint in Western art.

"These are the tears of things," Virgil writes in one of the greatest passages of the Aeneid. There's no escaping the tragic fate inherent in all human life.

Structurally, the two paintings are almost mirror images, and both paintings are full bodies reflected in water. In the Actaeon painting, an actual mirror is a dazzling still life in itself.

The painter Lucian Freud thinks these are the two greatest paintings ever painted. At the High Museum, I got into delightful and illuminating conversations with people who came even farther than I did to see these masterpieces. In fact, I hadn't noticed Callisto's heartbreaking tear until one of the other visitors pointed it out.

In this traveling exhibit, there are 10 other paintings from the National Gallery of Scotland, including two small early Titians, two gorgeous Veronases, a dramatic Tintoretto and 13 rare drawings. But there's no question about the main reason to see this show.

I hope the British are able to raise the money to keep these two amazing works of art together — where they belong.