Accessibility links
Unrest In Egypt Spurs Worry Over Oil Supply Some oil companies halted operations in Egypt, and there's concern about the Suez Canal, a major oil-shipping route. Even if supplies from Egypt were cut, there's enough production elsewhere to meet demand; it's the prospect of unrest spreading to nearby oil-producing countries that is worrisome. 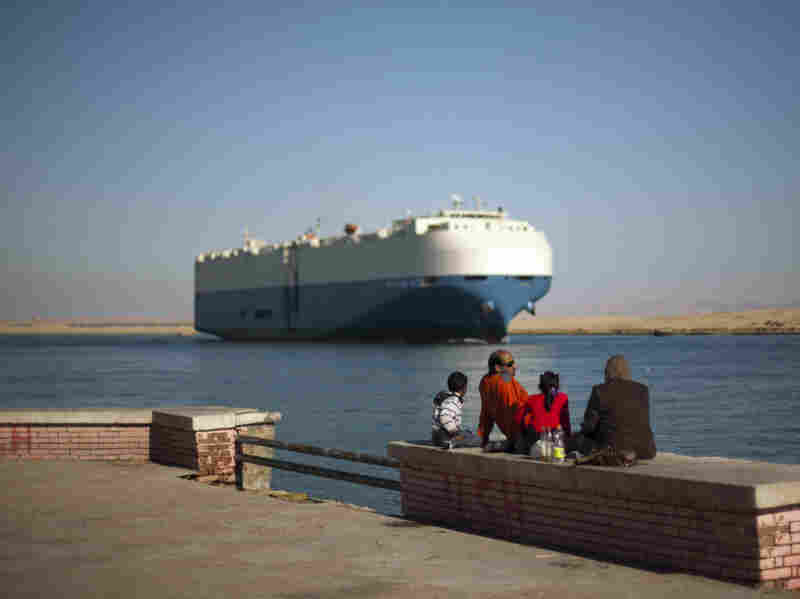 A cargo ship transits the Suez Canal en route from the Mediterranean Sea to the Gulf of Suez at the city of Suez, Egypt, on Wednesday. Emilio Morenatti/AP hide caption 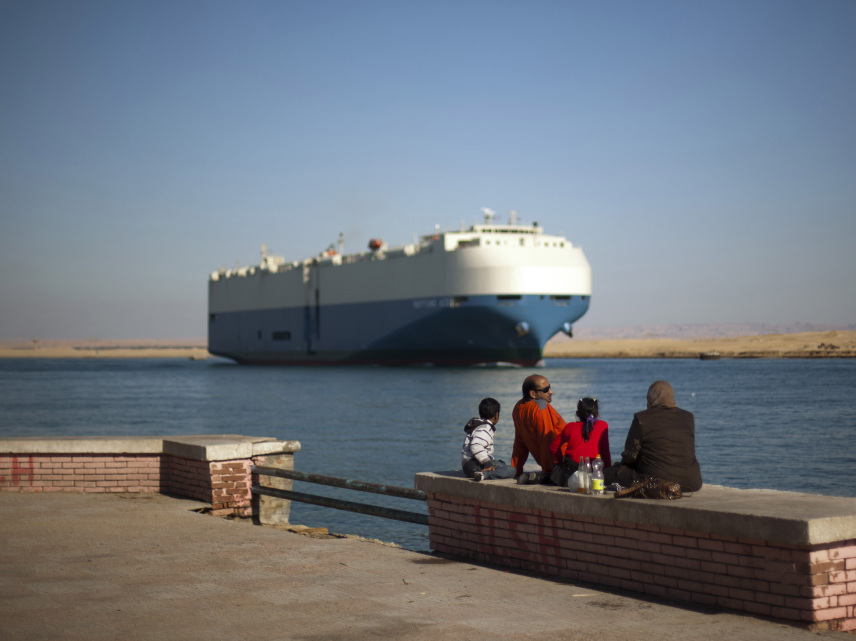 A cargo ship transits the Suez Canal en route from the Mediterranean Sea to the Gulf of Suez at the city of Suez, Egypt, on Wednesday.

Foreign oil companies in Egypt are evacuating their staff from the country and shutting down some operations amid the massive protests seeking the ouster of President Hosni Mubarak.

BP, which has operated in Egypt for more than four decades and has the largest presence there among the big oil companies, evacuated two planeloads of expatriate staff. It shut down new drilling as a precaution, but BP says production has not been affected by the unrest.

Like every other oil company contacted for this story, BP declined to talk in detail about the current situation in Egypt. Even if protesters aren't targeting oil facilities, experts say that at times like this, companies should play their cards close to the vest.

"You don't want to call attention to the location or the number of people that might become a target," said Amy Myers Jaffe, director of energy research at Rice University's Baker Institute.

Jaffe says oil companies have learned through the years how to keep doing business in a hostile political climate. They often employ safe houses — like spy agencies do — and they always have evacuation plans for their workers.

She says companies need to keep all of their options open during turmoil because they never know whom they'll have to work with next.

"Being patient and see what happens is always a good philosophy, because you just don't know how it's going to turn out," Jaffe said.

A Transportation Hub For Oil, Gas

The petroleum that comes out of Egypt is not all that significant for the world market, but the country is an important transportation hub for Middle Eastern oil and gas. About 2 percent of the world's crude oil travels through the Suez Canal and a nearby pipeline. Both are shortcuts from the Mediterranean to the Red Sea. Without that shortcut, the price of transportation goes up.

"The tankers will have to go around the Cape of Good Hope," said Bhushan Bahree, a senior director at IHS Cambridge Energy Research Associates. "That's about 6,000 miles extra, and it takes more time, money and cost."

Bahree says so far there has been no problem with oil moving through the canal or the pipeline. But he says even if there were, others in the region could easily make up for the lost petroleum.

"OPEC countries have a lot of spare capacity — about 5 million barrels a day, which is far more than goes through Egypt," he said.

Bahree says what makes most people anxious is the prospect of unrest spreading to nearby oil-producing countries like Libya and Algeria to the West or Saudi Arabia and Iran to the East.

In The U.S., Calls For Drilling, New Energy

Just as sure as turmoil in the Middle East prompts oil traders to push up prices, it also spurs calls for more drilling in the U.S.

"I believe the instability in Egypt underscores our need to expand our domestic energy production," said Sen. Mark Begich (D-AK) in a statement Tuesday.

Those calls were criticized by opponents of more drilling.

"No matter what the problem, big oil and its allies only have one solution, which is drill, baby, drill," said Dan Weiss, senior fellow and director of climate strategy at the Center for American Progress.

Weiss said he hopes the situation in Egypt instead will prompt the U.S. to focus on reducing oil consumption and producing more environmentally friendly sources of energy.