Accessibility links
The Nation: Gladwell Gets It Wrong On Social Media Malcolm Gladwell, the popular writer for the New Yorker, has caused waves by declaring that social media has had little relevancy in helping stoke the protests in Egypt. Ari Melber of The Nation begs to differ, and argues that online media such as Facebook and Twitter are what helped the the revolts gain such a large and organized following. 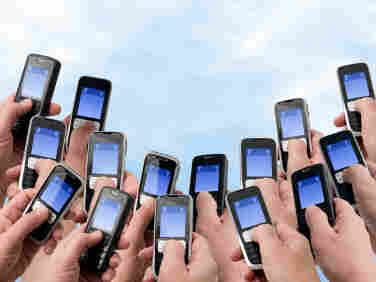 The protest in Egypt was organized largely in part thanks to spreading the word through Twitter and Facebook. Midway through the protests last week, the Egyptian government shut down the country's internet. It has since been turned back on. iStockphoto hide caption

Ari Melber is the Net movement correspondent for The Nation magazine. He is a columnist for Politico and a contributing editor at the nonpartisan Personal Democracy Forum.

Malcolm Gladwell made many waves — and enemies — with his New Yorker essay doubting the power of social media in political organizing. "The revolution will not be tweeted," he declared in October, and the revolutionaries tweeted back, sparking a heated and often predictable debate about the web. Since then, of course, people in the Middle East have been Doing Things that are more significant than anything one might say to rebut skepticism about web activism and "weak ties." On Wednesday, however, Gladwell resurfaced in an apparent response to the idea that digitally networked activists are exceling in Egypt — in contrast to his famous thesis. Gladwell's blog post is brief and thin, but it is also important for the ways he gets Egypt wrong.

The Egyptian protests "look like they might bring down the government," Gladwell notes. "As I wrote last summer[,] 'high risk' social activism requires deep roots and strong ties. But surely the least interesting fact about them is that some of the protesters may (or may not) have at one point or another employed some of the tools of the new media to communicate with one another."

"Please," he continues, revealing some exasperation before getting historical: "People protested and brought down governments before Facebook was invented. They did it before the Internet came along. Barely anyone in East Germany in the nineteen-eighties had a phone...and in the French Revolution the crowd in the streets spoke to one another with that strange, today largely unknown instrument known as the human voice." Gladwell ends his post with a pair of odd generalizations:

"People with a grievance will always find ways to communicate with each other. How they choose to do it is less interesting, in the end, than why they were driven to do it in the first place."

The overarching problem here is the false premise, frequently employed in these disputes. No one is arguing that this is the first protest in world history. Very few people think the Internet is an essential prerequisite to revolution. Instead, they're exploring whether the web and networked communications open up new and effective ways for citizens to converse and organize each other in repressive societies. (Access to mobile phones and text-messaging, for example, may have helped young people organize in Egypt and Tunisia in a different way than landlines or websites.) We can engage these issues without taking anything away from the French Revolution. Now, whether people "always" communicate grievances in authoritarian societies — a dubious claim — is less important to foreign policy than what comes of those communications.

More broadly, Gladwell assumes that asking "why" people "were driven" to these protests is somehow in competition with asking how they achieved such effective protests. Most journalism begins with questions — the questions editors ask reporters, and increasingly the questions audiences ask of the media they consume. We risk large errors when we ask the wrong questions or collapse distinct inquiries. That's especially true for reporting on closed societies. Figuring out whether people are upset enough to protest is one question, which reporters and governments care about, and learning whether those people have the ability to organize protests is another. For Egypt, Gladwell actually has it backwards. It is not a surprise that many Egyptians do not love their dictator — that is not what shocked Washington and the Arab world last week; it is that people managed to plan and execute such a massive public demonstration of that sentiment. So the "how" is more striking than the "why."

Which brings us to another presumption in Gladwell's post: the subjective and potentially indulgent judgment about what is "interesting." Here, I have a little sympathy with his annoyance. Some people are interested in what moves people: first principles and anger points and all that; others are interested in how political action works: collecting petition signatures, party committee elections; and others fixate on technology or media: how an iPhone works, why an article is the most e-mailed. Since the media have more control over public discourse than other groups, by definition, they can skew debates to disproportionately cover their favorite topics, which include itself. This tendency is partially checked by new media, which add criticism and alternative topics to the mix. If there's a blind spot here, however, it is in the areas of media and technology, which are overemphasized by both new and old media. (Pew has data on this trend.)

So while bloggers and the digerati may focus on the new media aspects of Egypt's protests, other people think human rights and the seismic political changes are a bigger deal. The media may also rush to cover visible technology instead of more obscure factors — Evgeny Morozov argues that this happened during the Iranian protests — driving a feedback loop that confuses the public and policymakers alike. So we should be on guard for such dynamics. But when Gladwell simply announces that how people communicate is "less interesting" than why, he's just stating his personal, editorial preference as accepted fact. The banal reality is that different people find different things interesting. And really, by ending his defensive post with that line, Gladwell sounds a bit like the recent Onion headline tweaking his predicament: "Panicked Malcolm Gladwell Realizes Latest Theory Foretells End Of His Popularity."