Accessibility links
Dallas Policy May Drive Some Taxis Off The Road Independent cab drivers are protesting a new city policy that allows natural gas cab drivers to cut in front of regular gas cab drivers at Dallas' city-owned airport. Regular gas cabbies say they can't afford to convert their cabs, and argue the policy has cut their pay in half. The protests continue as the Super Bowl comes to town. 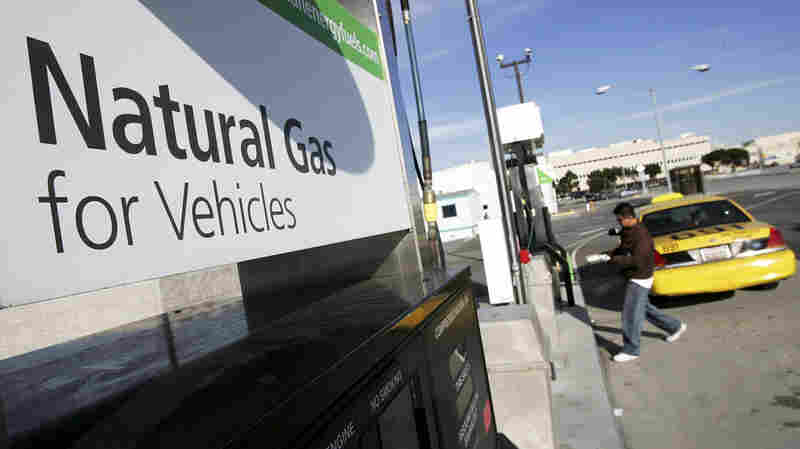 Independent taxi drivers in Dallas are in revolt as the Super Bowl comes to town. The city of Dallas has instituted a policy that allows 87 taxis, equipped to run on natural gas, to go to the front of the pick-up line at the city-owned airport. The city says it's trying to improve air quality. But that's put the hundreds of taxis that still run on gasoline at a decided disadvantage.

About 200 taxi drivers gathered in front of Dallas City Hall last week. They are all black, and most are immigrants from Africa. Every one of them drives a gasoline taxi cab.

These taxi drivers own their own cabs and make up between 10 and 20 percent of the region's estimated 3,000 drivers.

The Dallas chapter of the NAACP is trying to help them. Chapter President Juanita Wallace is the lone woman in the sea of faces at the protest.

They're pushing all these drivers out of Love Field [Airport] ... it's cutting my pay in half or less. ... At least make it fair. Not just have 80 cars and say, 'OK there's 80 special drivers, you get to go first all the time.'

The object of their discontent can be found at Dallas' city-owned Love Field Airport.

Hour after hour, the regular gas cabbies watch the natural gas taxis pull in front of them while they sit.

"They're pushing all these drivers out of Love Field and into the stands and out into the streets," said Kevin Cantrell, who has been driving a cab for 20 years. "It's cutting my pay in half or less."

Cantrell drives a minivan that he says he's about to lose because he's now six weeks overdue on his lease payment. He's not against the idea of natural gas cabs, but he says the city's new policy is unreasonable.

But natural gas cabbies such as Steve Young, who drives for Cowboy Cab, say they deserve to go first.

"We pay more for our cabs, so we have first load priority over the regular gas drivers," Young said.

It costs as much as $15,000 to convert a cab to compressed natural gas (CNG). So it's so far only the biggest cab companies in Dallas — such as Cowboy Cab and Yellow Cab — who've got the CNG taxis.

The cab companies charge drivers more to lease their CNG cabs, but those drivers can make that up and more because of the new policy at Love Field.

"I feel that some of them are just set in their ways and stubborn about it and don't like change," Young said.

The gasoline taxi drivers have been staging job actions trying to use the Super Bowl as a bit of leverage. They created a couple of rolling blockades on the freeways and blocked cab traffic at Love Field.

Adrianne Cuington is the transportation manager at Love Field. He flags the cabs and helps passengers load. He says it's gotten a little ugly there.

If you get in reasonably nicely dressed, you don't want to get in that cab. [The regular gas cabs] are not clean, old, used, all of those sorts of things.

"I had to go back there to help my dispatcher. She's an elderly lady that works in the back, Miss Angie," said Cuington. "And when I get back there ... cab drivers [were] shouting everywhere ... then they yell in my face. One of them sucker-punched me. But I just acted on impulse — I hit him back."

'Not About Air Quality At All'

The city of Dallas by and large seems indifferent to gasoline taxi drivers' complaints about its new policy. Mayor Tom Leppert likes the market-driven ideology.

"It is an incentive that does not cost the taxpayer anything," Leppert says. "It is not a subsidy. We've tried to stay away from subsidies ... it does encourage the use of natural gas ... [and] it makes a lot of economic sense."

Dallas, like most large American cities, is out of compliance with the Clean Air Act, and Leppert says the new policy will help.

But the independent drivers say this new policy is not about air quality at all. They say this is really about driving independent black cab owners out of business so white businessmen can step into a nice, new CNG cab when they get off their plane.

Leppert says cab quality is a consideration for the city, but that it's not the purpose of the policy.

"If you get in reasonably nicely dressed, you don't want to get in that cab," said Leppert. "[The regular gas cabs are] not clean, old, used, all of those sorts of things."

Officials at Dallas/Fort Worth International Airport — which is not city-owned like Love Field — have tried to follow Dallas' lead and allow CNG cabs to go to the front of the line. But a federal judge has stopped it at DFW for the time being.

Gasoline cab drivers say they'll do what they can to disrupt the Super Bowl if the city won't change the policy. But city officials say they're not worried. They don't believe there are enough independent drivers to have an impact.