Accessibility links
Thousands Gather To Mourn Hmong Leader Vang Pao During the Vietnam War, Gen. Vang Pao led Hmong guerrillas fighting communist forces invading Laos from North Vietnam — an effort funded by the CIA. Throngs of Hmong from around the world will be in Fresno, Calif., Friday for the start of a six-day funeral to honor the general, who left a controversial legacy. 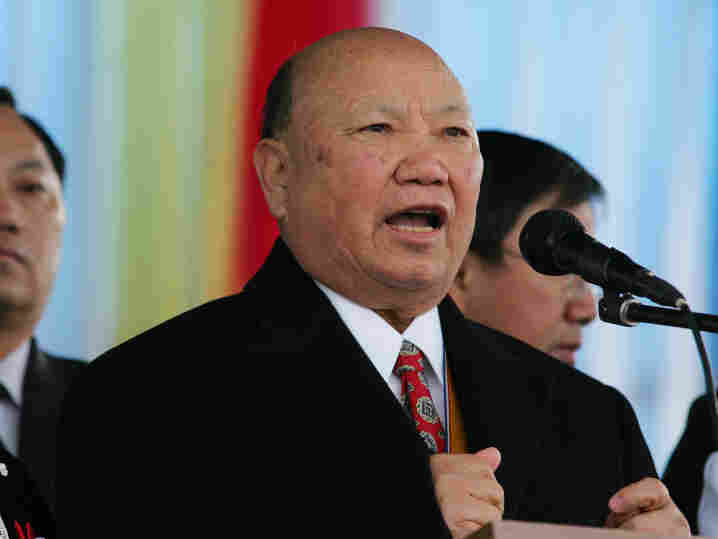 Former Laotian Gen. Vang Pao addressed thousands of supporters when he spoke at the Hmong International New Year's Celebration Wednesday, Dec. 26, 2007 in Fresno, Calif. Pao, who died Jan. 6, remains a hero to many in the Hmong community for leading guerilla fighters, supported by the U.S. and armed by the CIA, in battling Communist forces during the Vietnam War. Gary Kazanjian/AP hide caption

Tens of thousands of Hmong from around the world will gather Friday in Fresno, Calif., for the start of a six-day-long funeral. They're honoring General Vang Pao, who led guerrilla fighters in the CIA's secret campaign in Laos during the Vietnam War.

Every night since Vang Pao, 81, passed away on Jan. 6, groups of refugees in Fresno have been holding vigils and singing mournful songs about the man who brought them to America.

During the war, Vang Pao galvanized the Hmong — an ethnic minority in Laos — to leave their farms and villages and fight the communist invasion from North Vietnam. After the CIA pulled out of Laos in 1975, Vang Pao helped resettle tens of thousands of Hmong refugees in California, Wisconsin and Minnesota.

Nelson Vang is one of those refugees. He lost his parents during the war and was one of many orphans the general took in.

"When I look at him, he's like God — I couldn't face him," Nelson Vang remembers. "When I pass by, he make me so scared, because he's like a very powerful human life."

At the Hmong Guerrilla Unit in Fresno, a VFW of sorts, a portrait of Vang Pao hangs on the wall.

Nhia Vang fought alongside the general and spent14 years leading troops in the jungle, often eating roots and leaves to survive. When he came to America, he was thankful Vang Pao set up charities to help with farming and education.

"My life is hard because of the English language," Nhia Vang says, "but my family has been making progress. My children are grown up, they all attended school, they've gone to college and they're doing well. "

'They Saved Hundreds Of American Pilots And Soldiers'

An estimated 35,000 Hmong soldiers — and tens of thousands of civilians — died in Laos during the war. Dr. Lue Vang was only 17 when he joined the front lines.

"We sacrificed the life, but it's under the table, it's a secret, so the public — the American public — did not know," he says. "They only see South Vietnam on their TV or news radio, but not mention much about Laos or Cambodia."

Some Hmong veterans say Vang Pao died of a broken heart. In 2007, federal prosecutors charged him and other Hmong leaders with conspiring to overthrow Laos' communist government. Those charges were later dropped.

Toward the end of his life, the general was working hard to get Hmong veterans buried as war heroes in national cemeteries like Arlington. Marine Veteran Charlie Waters worked with Vang Pao to lobby Congress for that recognition.

"They did fight for 15 years for the CIA, and they were paid by the CIA and they were supplied by the CIA, which is government," Waters says. "And they did a tremendous job, incredible for what they had. They were ferocious fighters. They saved hundreds of American pilots and soldiers who wandered off into Laos."

Some of those pilots are in Fresno to pay tribute to the general. The funeral will include a formal color guard and traditional Hmong burial rites to deliver Vang Pao's spirit to its final resting place.

Whether his body will be buried in Arlington National Cemetery depends on a waiver from the secretary of the Army. A decision could come any day.