Accessibility links
Tiny Water Flea Clocks In Record Number Of Genes It can grow a spear and a helmet when threatened, turn bright red when stressed, and has more genes than any animal studied so far. But what can we really learn from the water flea? 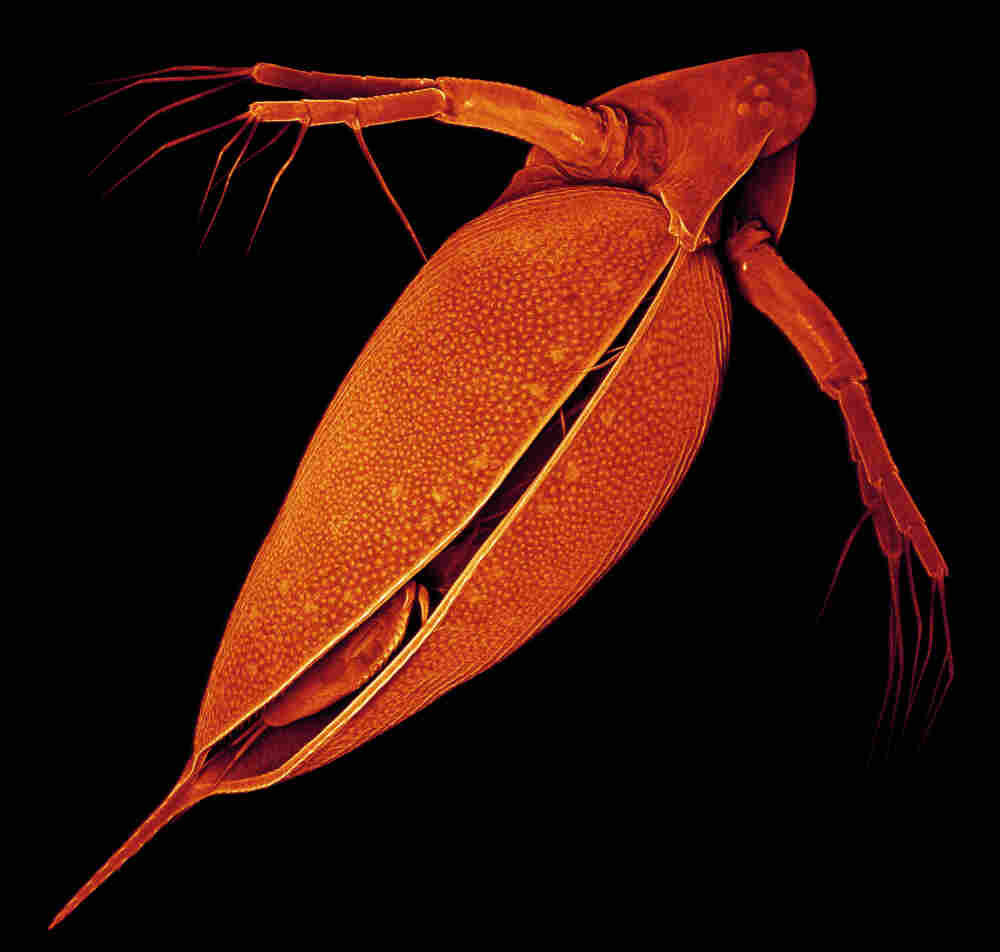 Researchers have sequenced the genome of the common water flea, Daphnia, shown in this false-color micrograph. About 35 percent of the genes are brand new to science. Jan Michels/Christian-Albrechts-Universitat zu Kiel hide caption

Imagine a creature that can grow its own spear and helmet when threatened by an attacker. It sounds like fiction, but it's true.

And now, researchers have sequenced the 200 million letters of DNA that make up the genome of the tiny animal. 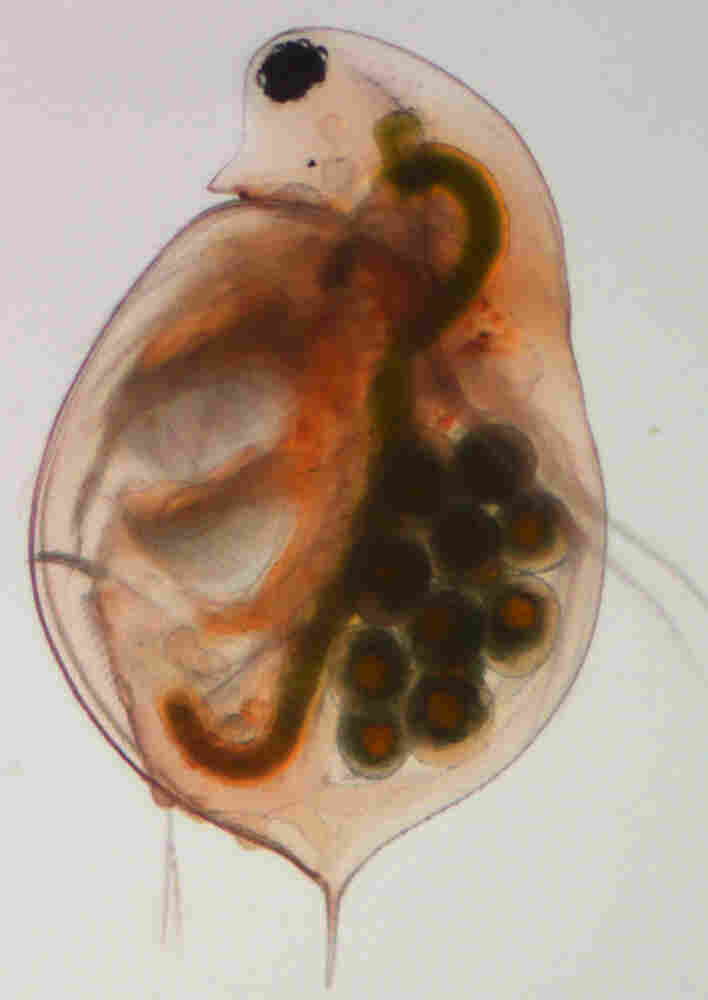 Daphnia are crustacea the size of a grain of rice. The transparent creatures have about 31,000 genes — the most of any animal studied to date. Humans, by comparison, have about 23,000 genes. Christian LaForsch/LMU Munich hide caption 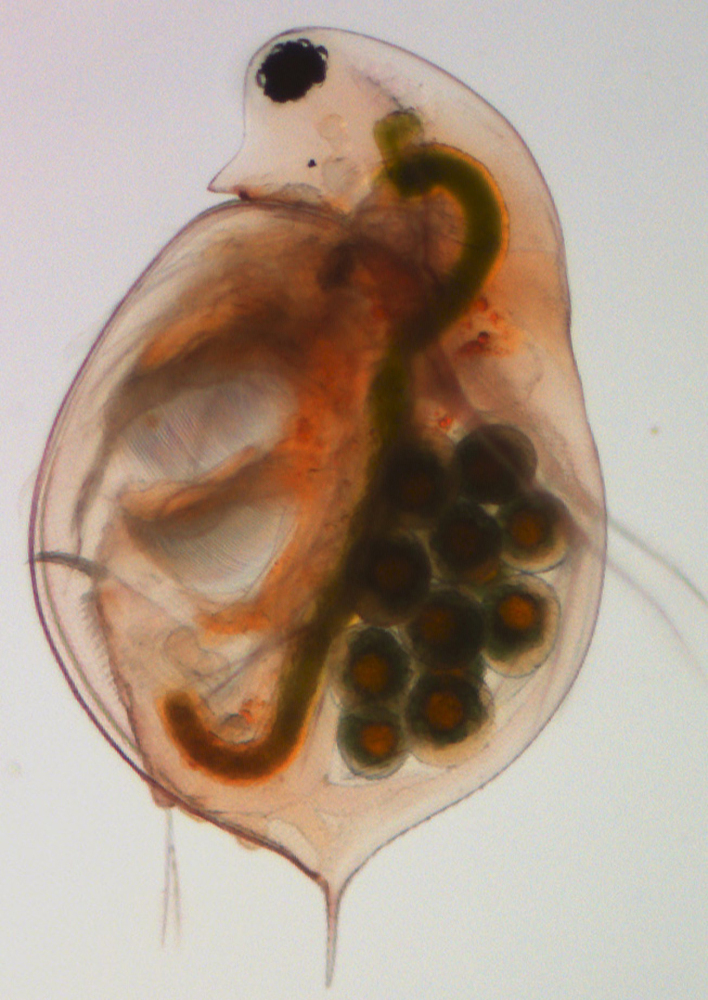 Daphnia are crustacea the size of a grain of rice. The transparent creatures have about 31,000 genes — the most of any animal studied to date. Humans, by comparison, have about 23,000 genes.

"Daphnia are small crustacea, about the size of an equal sign on your keyboard," says John Colbourne, the associate director of the Center for Genomics and Bioinformatics at Indiana University, Bloomington. Colbourne led the sequencing effort. Daphnia are ubiquitous in freshwater ponds and lakes and are often used to assess the health of ponds. Since the creature is so well studied by ecologists, knowing its genetics should reveal a lot about how genes respond to different environments.

The first scientists to describe Daphnia thought they were a kind of flea because they assumed the red color came from sucking blood as fleas do. It turns out they're not bloodsuckers — they're blood makers. Daphnia have genes that make hemoglobin, so when the animal is stressed out, those genes switch on and the animal looks red.

In fact Daphnia have an astonishingly large number of genes.

"We count more than 31,000 genes," says Colbourne. By comparison, the human genome has more like 23,000 genes. If Guinness tracks such things, Daphnia would hold the record for the most genes of any animal studied to date.

"Many of those genes — we estimate around 35 percent of them — are brand new to science," says Colbourne. He and his colleagues are publishing their findings in the current issue of the journal Science.

Why does a simple organism like Daphnia need more genes than a human?

"It's hard to say 'need more genes,' because that would mean evolution has a goal," Colbourne says. "In this case it's obviously found ways to use more genes. It apparently uses those genes to cope with its environment."

Jeff Dudycha, an assistant professor of biological sciences at the University of South Carolina, says knowing the DNA sequence of Daphnia is particularly useful because many of the animals used for genetic research have only been studied in the lab.

"It's virtually impossible to figure out much about their ecology in nature," he says. But ecologists have been studying Daphnia for years, and now they can link all that ecological research with the new genetic research.

Saran Twombly, a program officer at the National Science Foundation, one of the federal agencies that supported the investigation of Daphnia's genetics, agrees that the animal provides some unique research opportunities.

"What is it about the organism that allows its genome to be so flexible in response to its environment?" says Twombly.

She says you shouldn't be surprised that it's possible to learn some fundamentally important things about life on Earth from a critter about the size of a grain of rice.

"Most of what we know about biology comes from decidedly uncharismatic organisms: worms, flies, bugs," she says. "We can grow them easily; we know what to feed them; we can do experiments with them. [Scientists] can't do any of that stuff with lions and tigers and bears."