Accessibility links
400 Yellowstone Bison Held For Possible Slaughter Bison periodically attempt to migrate out of the park in search of food, but many end up in government-operated corrals under a controversial program meant to guard against the spread of the disease brucellosis to livestock. 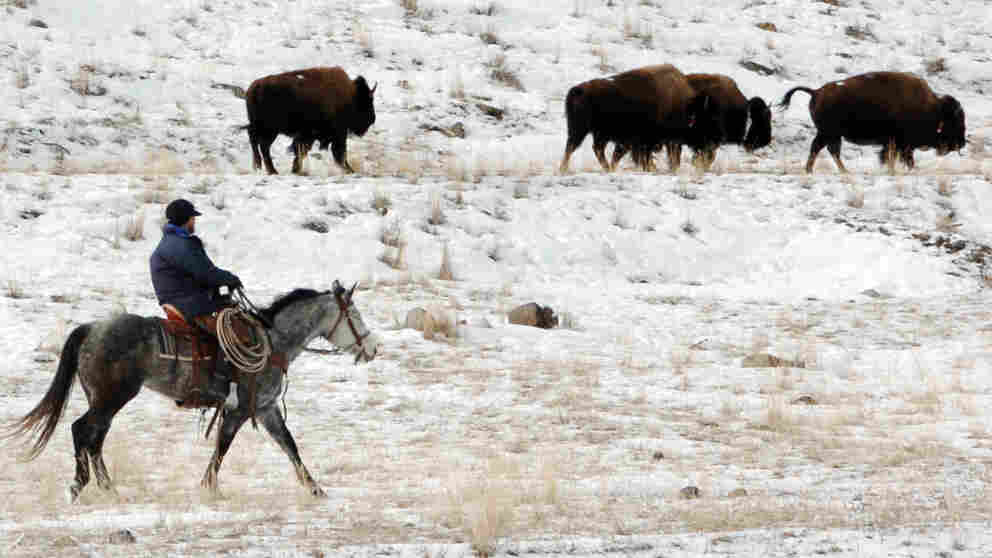 Animals that test positive for exposure to the disease Brucellosis were to be sent to slaughter in coming days. Matthew Brown/Associated Press hide caption 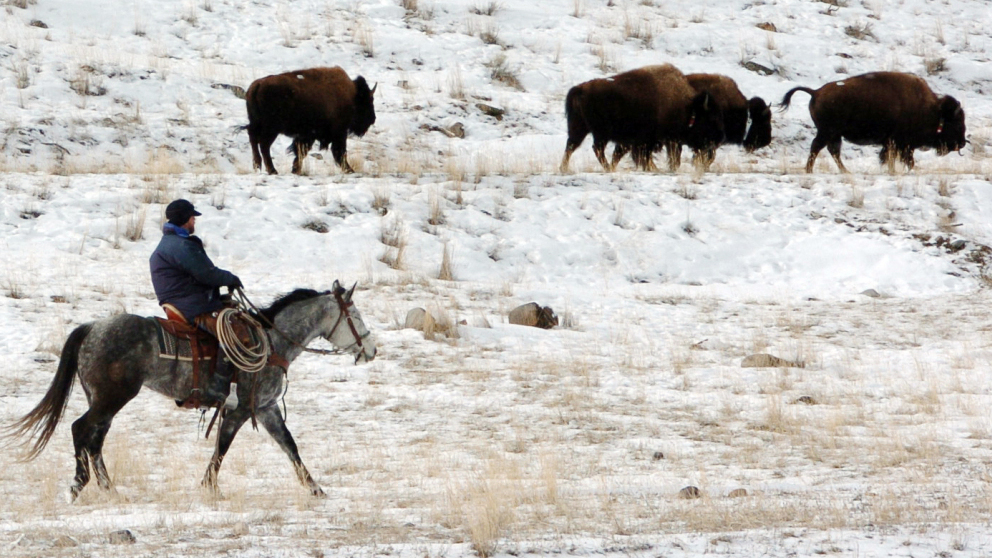 Animals that test positive for exposure to the disease Brucellosis were to be sent to slaughter in coming days.

Yellowstone National Park's iconic bison herds are suffering their worst winter in several years with almost 400 of the animals being held for possible slaughter - and a much-heralded initiative to expand where they can roam on the verge of failure.

Forty-seven more bison were captured at the Montana border on Thursday. Yellowstone workers and state livestock agents were trying to halt the animals' exodus from the snow-packed park to lower elevations.

Bison periodically attempt to migrate out of the park in search of food, but many end up in government-operated corrals under a controversial program meant to guard against the spread of the disease brucellosis to livestock.

Disease testing on the animals began Wednesday. Those that test positive for exposure to brucellosis are slated to be shipped to slaughter.

Through Thursday, 161 of the 368 captured bison had been tested. Fifty-three tests came back positive and 108 negative, park spokesman Al Nash said.

There is no guarantee the negative animals will be released. Holding them until spring in the corrals along the park border could prove impossible if bison keep pouring out of the park.

More of the animals were moving toward the park border Thursday, and the corrals only hold about 400 animals.

"Bison can move a long distance in a short period and we've often seen movement in the night hours," Nash said. "Our plan at the moment is to continue testing and sorting these animals. We'll see what next week brings."

Livestock officials said plans to ship brucellosis-positive bison to packing plants beginning this week had been delayed until at least Monday, after agencies ran into difficulties lining up trucks for transport.

Wildlife advocates scrambled to stop the shipments, asking a federal judge in Helena for a restraining order that would halt the impending slaughter. Those involved in the legal effort said the chance of livestock being infected by bison is too low to justify the death of so many bison - the largest wild land animals in North America.

"It doesn't make sense why they have such a lethal approach," said Tom Woodbury with the Western Watersheds Project, one of the plaintiffs in the case. "There are no cattle on public lands (adjacent to the park) this time of year. This seems to be more about population control than disease control."

Meanwhile, a $3.3 million initiative to give a small number of bison more to roam outside the park was down to a single animal by Thursday.

It has been just two weeks since 25 of the burly animals were herded onto the Gallatin National Forest, where bison had been prohibited for decades. But some of them repeatedly left the 2,500-acre patch where they were supposed to spend the winter. One was shot after entering private property, and 23 were captured and shipped back to the park or returned there on their own.

It has been just two weeks since 25 of the burly animals were herded onto the Gallatin National Forest, where bison had been prohibited for decades. Since that widely-publicized event, 23 of the animals have been captured and shipped back to the park or returned to the park on their own. One was shot after entering private property.

Government officials said it was uncertain when or how the attempt to carve out new habitat for the species in Montana. The state's Democratic governor, Gov. Brian Schweitzer, suggested another batch of 25 bison could be herded from the park down to the forest land, but there were no immediate plans to do so.

Roughly half of Yellowstone's estimated 3,900 bison have been exposed to brucellosis, which can cause infected animals to prematurely abort their young.

There have been no recorded cattle-to-bison brucellosis transmissions, and few cattle remain in the immediate vicinity of the park. Wildlife advocates said those conditions make it possible for government agencies to ease their restrictions on where bison can move.

But a spokesman for the Montana Stockgrowers Association said the livestock group is closely tracking the pending legal case and remains wary of any move to expand where bison can roam outside Yellowstone.

Jay Bodner, the association's director of natural resources, said cattle producers whose animals are infected with brucellosis can face economic losses if buyers are not willing to pay as much for their animals.

"Management actions still need to be taken," he said in reference to the government-sponsored capture and slaughter program.