Accessibility links
What Obama Is Learning From Reagan's Example President Obama has adopted Ronald Reagan as a kind of patron saint. As he tries to figure out how to deal with a divided Congress for the next two years, he appears to be studying the Great Communicator's approach. 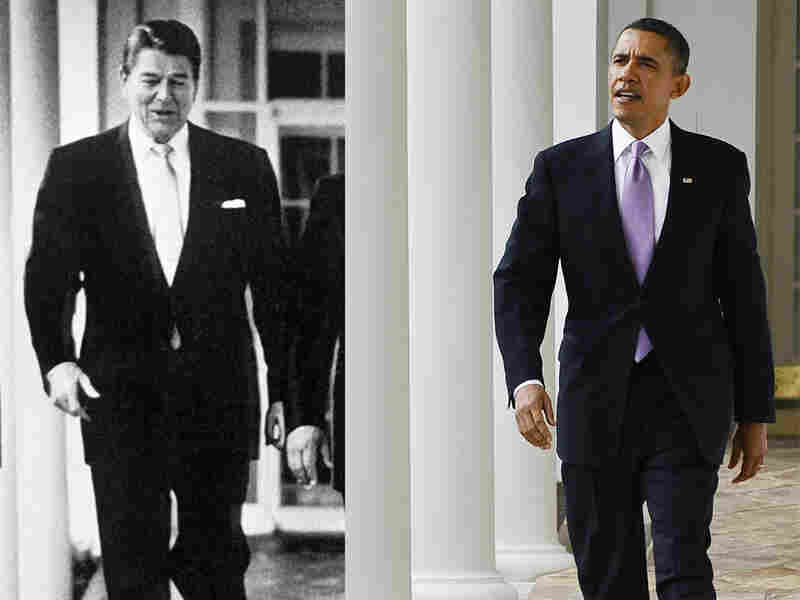 President Ronald Reagan, who would have turned 100 on Sunday, has long been a hero without equal among Republicans. But the 40th president has more recently been adopted as a kind of patron saint by the country's leading Democrat.

President Obama has immersed himself in Reaganalia: He's written a USA Today op-ed praising Reagan for understanding the American people's hunger for change. He read Lou Cannon's biography of Reagan over Christmas break. And on Jan. 25 he gave a State of the Union address that many thought echoed the optimistic vision of the Great Communicator himself.

"Clearly the president has Ronald Reagan on his mind," says presidential historian Douglas Brinkley, who edited the Reagan diaries. "There are some obvious comparisons: the way that Reagan came in as a kind of revolutionary president on the right ... and was a polarizing figure in '81 and '82, got defeated by Democrats in the midterm election, but came back to be a two-termer."

Brinkley was one of several historians Obama invited to the White House to talk about past presidents in general — and about Reagan in particular. But Obama's interest in Reagan isn't new.

As a presidential candidate in 2008, Obama said: "I think Ronald Reagan changed the trajectory of America in a way that, you know, Richard Nixon did not and in a way that Bill Clinton did not."

While Obama might seem like the polar opposite of Reagan ideologically, in his 2006 book The Audacity of Hope, he agreed with one of Reagan's basic arguments.

"The conservative revolution that Reagan helped usher in gained traction because Reagan's central insight — that the liberal welfare state had grown complacent and overly bureaucratic, with Democratic policymakers more obsessed with slicing the economic pie than with growing the pie — contained a good deal of truth," he wrote.

Since the Democrats' defeat in the 2010 elections, Obama has come up against another enduring aspect of Reagan's legacy — one he also acknowledged back in 2006. "He fundamentally changed the terms of the political debate. The middle-class tax revolt became a permanent fixture in national politics and placed a ceiling on how much government could expand."

Sometimes it has seemed as if Obama spent the past two years trying to ignore that observation, but now that he's dealing with divided government, he has a keener interest in how Reagan dealt with an opposition Congress, says former Reagan Chief of Staff Kenneth Duberstein, who has also consulted with the president about his former boss.

"One of the things that I think has impressed President Obama is that Ronald Reagan fundamentally understood that to govern you need to build consensus in America and not simply consensus in Washington," Duberstein says.

And that means telling and retelling a clear story about where you want to take the country. The president started doing that in his State of the Union address, a speech White House aides described as upbeat, forward-looking and self-consciously optimistic — the definition of Reaganesque.

"As contentious and frustrating and messy as our democracy can sometimes be, I know there isn't a person here who would trade places with any other nation on Earth," Obama said in the speech. If that sounds like Reagan's "shining city upon a hill," it's no accident.

"Ronald Reagan always believed that optimism is a force multiplier," Duberstein says. "President Obama needs to pick that up, not simply as a campaign tactic, but more importantly as a governing strategy."

Not Quite 'Morning In America'?

Duberstein says that will be even more important as the economy begins to pick up. But the economy is one area where the Reagan and Obama stories might diverge.

Cannon, Reagan's biographer, remembers that the unemployment rate in 1983 was high, not unlike what Obama faces today. But in the following two years, Cannon says, the economy didn't just improve — it came roaring back, with growth rates of 7 percent.

Now, he says, "the most optimistic forecast I've heard for 2011 is 4 percent, and a lot of economists are way below that."

So "Obama needs probably more help there than he's going to get," Cannon says.

But maybe he'll get a little help from Reagan himself. Brinkley says Obama is wise to identify himself with the 40th president any way he can.

"Reagan is in the water, it's in the air, he's in the DNA of America at the moment," Brinkley says. "He's beloved by the American people."

And that's something Obama understands only too well as he explores the parallels between himself and Reagan — who suffered a shellacking in his first midterm election, was dismissed as an amiable dunce and only became the Great Communicator after winning a second term. And Obama press secretary Robert Gibbs says: We hope our story ends largely the same way.