Accessibility links
The Sway Machinery: Finding Inspiration In The Desert The Brooklyn band gives traditional Jewish cantorial music a modern edge with a swinging horn section and rock beats. But the unlikely invitation to play a major music festival in Mali — a Muslim country — inspired the band to record a new album, The House of Friendly Ghosts, Vol. I. 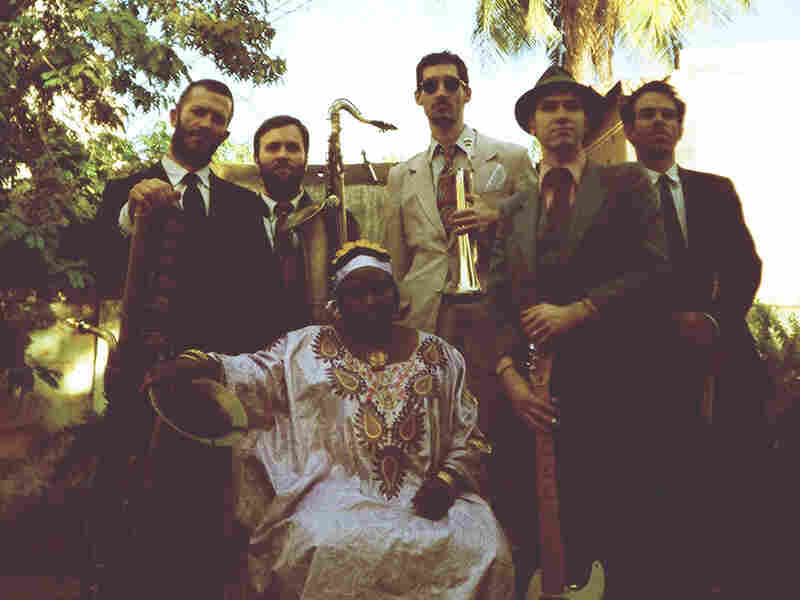 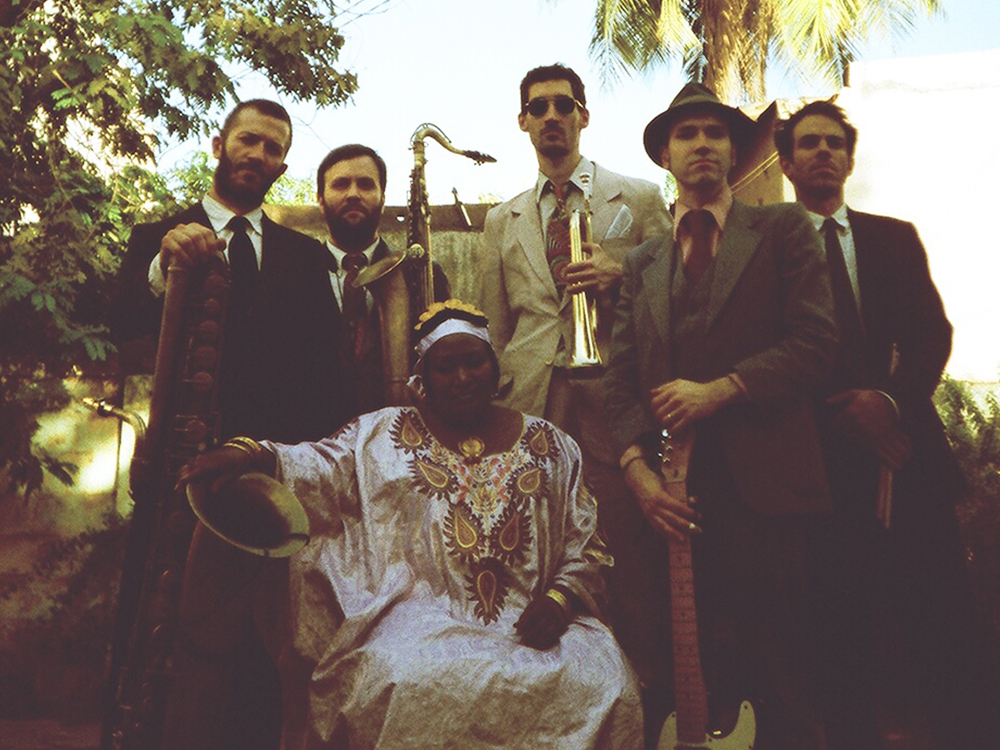 The Sway Machinery with Khaira Arby

The Brooklyn band the Sway Machinery formed five years ago around a particular notion: Take traditional Jewish music and make it funky enough for a nightclub.

About a year ago, the Sway Machinery received an invitation to play for an audience its members probably never imagined at the Festival of the Desert in Timbuktu, Mali. That experience forever changed the worldview of bandleader Jeremiah Lockwood, and his new album, The House of Friendly Ghosts, Vol. I, reflects that change.

But if one thing has remained constant over the Sway Machinery's career, it is the band's mission.

"The mission of the Sway Machinery is and always has been to mine cultural memory, personal memory, and to use the intersection of the personal and the cultural as a place from which to create something new and something beautiful and something that will be a gift and a joy to people," Lockwood says.

Lockwood has long been mining his own cultural and personal memory for inspiration. Coming from a family steeped in Jewish musical tradition — including his grandfather, Cantor Jacob Konigsberg — Lockwood adds rhythm to traditionally meterless cantorial songs.

After what Lockwood believes to be a fortuitous encounter between the band's trumpet player, Jordan McLean, and Chris Nolan, the North American liaison for the Festival of the Desert, the Sway Machinery wound up performing in Mali. Lockwood describes it as perhaps "as different culturally from America as we're able to experience." Despite the drastic differences in culture, he found the people of Mali had a deep understanding of his own music.

"When I would say, 'This is a piece of music that I learned from my grandfather,' that's a cultural concept that people in Mali can relate to very, very deeply. You'll meet people there who are 22nd generation Creoles, and everything they do — how they make their living, how they make their art — is all coming through a familial lineage. So that idea is very deeply embedded in the culture of Mali, and people responded very beautifully to hearing that I was coming out of a family music tradition — the fact that I was Jewish didn't seem to impact that at all."

While in Mali, Lockwood and the rest of the Sway Machinery had a chance to work with Malian artist Khaira Arby, the proclaimed "queen of desert music." In addition to contributing vocals to Lockwood's songs, Arby worked alongside the Sway Machinery to arrange her own songs on The House of Friendly Ghosts, Vol. I.

On Lockwood's track, "Golden Wings," his music becomes intertwined with Arby's — the two very different musical cultures meet and complement each other.

"The idea is I wanted to talk about my grandfather and his death and how I invite him to enter into me to continue to sing through me," Lockwood tells Weekend All Things Considered host Linda Wertheimer. "We recorded the song and then later, when Khaira was in the studio, I asked her if she would sing with me. I explained to her what the track was about as best I could. She created in the studio a kind of praise song in which she used both my name and my grandfather's name and wished him peace in the next world."

The cultural collaboration isn't over. The band found that it left Mali with more recordings than it had expected. So as the title of the album would suggest, the collaboration will continue on a Vol. II.

In the meantime, Lockwood says the Sway Machinery is looking forward bringing this music back home to the U.S., where the band will tour with Arby.