Accessibility links
The Root: Waiting For Black Voices On Egypt Some say that the United States is slow to react to the uprisings sprouting up in the Middle East and North Africa. Joel Dreyfuss of The Root argues that the African American community in particular is strangely mute, and wonders if this silence marks a changing tide. 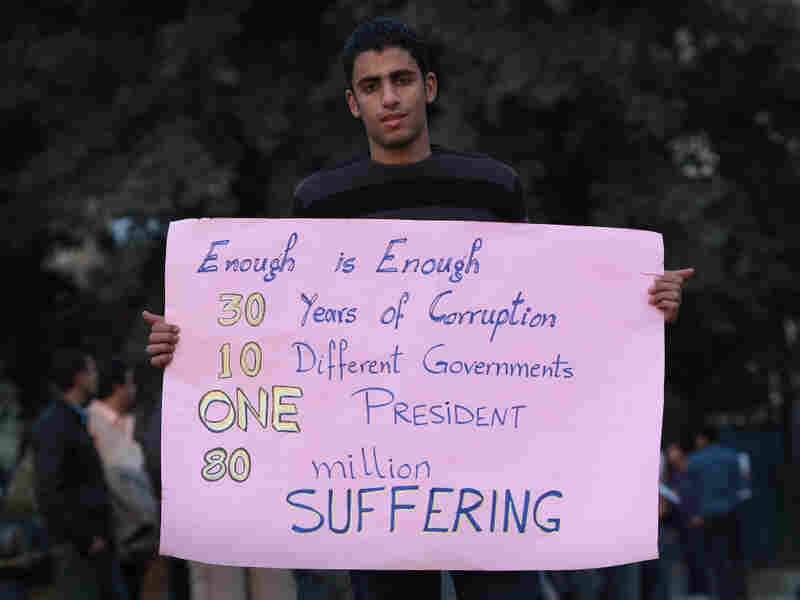 A man holds a placard in Tahrir Square in Cairo, Egypt. Cairo remains in a state of flux and marchers continue to protest in the streets, demanding the resignation of Egyptian president Hosni Mubarek. Some say the United States — as well as the African American community — are being slow to respond to the uprisings. Peter Macdiarmid/Getty Images hide caption 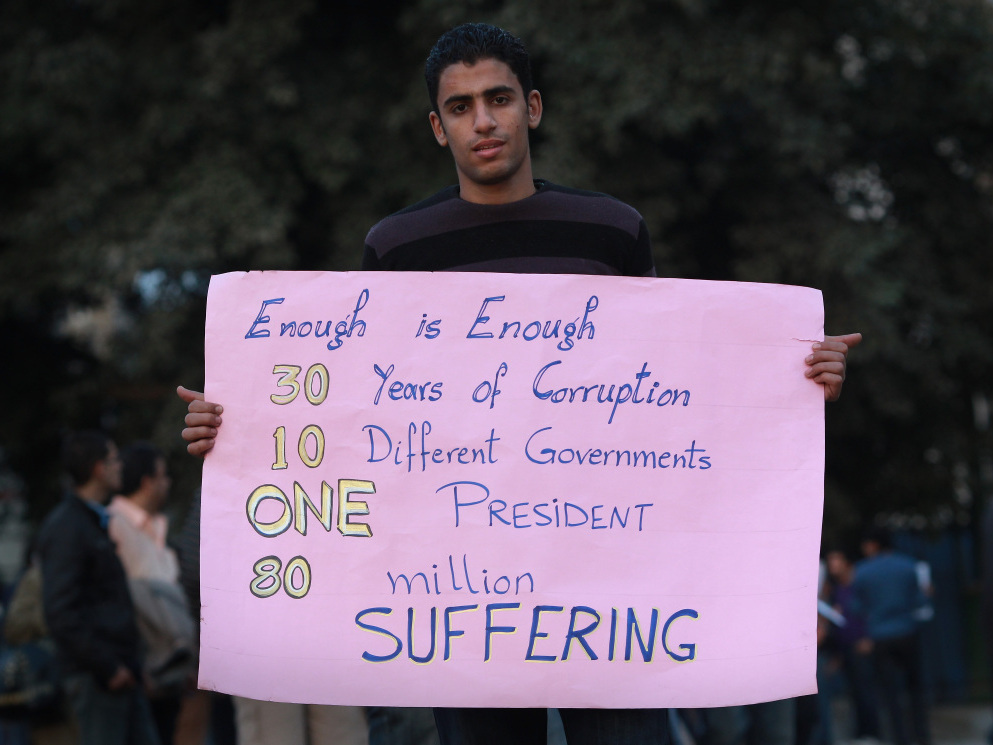 A man holds a placard in Tahrir Square in Cairo, Egypt. Cairo remains in a state of flux and marchers continue to protest in the streets, demanding the resignation of Egyptian president Hosni Mubarek. Some say the United States — as well as the African American community — are being slow to respond to the uprisings.

Joel Dreyfuss is the managing editor of The Root.

The epidemic of democratic yearning that has erupted in the Arab world is not good for the United States. America has too often been on the wrong side of the human rights struggle, and now, in a region of enormous strategic importance, we face unpredictable consequences and could end up paying for our long-standing hypocrisy in foreign affairs.

U.S. presidents, including Barack Obama, have long said all the right words about the importance of democracy. But Muslims, Christians and Jews from Tel Aviv to Casablanca to Baghdad know that we haven't really meant it. We drew uncomfortably close to Hosni Mubarak in Egypt, Ali Abdullah Saleh in Yemen, Abdelaziz Bouteflika in Algeria — and let's not even start listing the tyrants further east in the former Soviet "stans."

Superpowers have a tendency to side with authoritarian regimes that support their objectives — or at least pretend to. Democracies are too unreliable, too complicated, require a lot of maintenance and tend to challenge assumptions. "We preach democracy and then prop up despots," Rep. Emanuel Cleaver (D-MO) chairman of the Congressional Black Caucus, bluntly told The Root. "We do it all the time."

The revolts in Tunisia, Egypt, Jordan and Yemen have shattered the prevailing wisdom that democracy was not important in the region and that our allies were firmly in control. The wildfires started in Tunisia, but Tunisian anger right now is aimed primarily at former colonial power France, which embraced ousted President Zine al-Abidine Ben Ali for 23 years. Paris was so oblivious to the genuine rage of ordinary Tunisians that the "Jasmine Revolution" was a giant shock to its Middle East "experts." In one of the worst pieces of diplomatic timing in decades, France offered Ben Ali "expertise" in putting down unrest even as he was packing his bags.

The U.S. may not be spared blame in Egypt, where America is seen as the malevolent uncle who cemented a brutal regime's position with billions of dollars in cash, military equipment and intelligence about its opponents. And as Egypt erupts in the deepest and most dangerous challenge to the Mubarak regime yet, the Obama administration sounds no different from its predecessors.

On Friday, President Obama continued to stress Mubarak's importance in the struggle against terrorism while adding a soupcon of sympathy for the demonstrators, to hedge his bets. The president hinted that the U.S. might suspend the $1.5 billion in aid it provides Egypt annually, giving the U.S. an exit if the winds (or the Egyptian military) turn against Mubarak.

There's always a chance that Egypt's untimely outburst of self-determination will be strangled and the U.S. and its unsavory ally will attempt to resume business as usual. But if this expanding pressure for regime change succeeds, America could soon be dealing with a government that blames us for ignoring, and even helping to stifle, the country's long-standing desire to live free — and it is likely to be a lot less interested in helping us battle al-Qaida or solve the Israeli-Palestinian issue.

The African-American Tradition of Dissent

The Arab masses had reason to hope that Obama's ascendancy would change America's stance. His Nobel Prize-worthy Cairo speech in 2009, arguing that Islam was not America's enemy, marked the high point for that optimism. The president, however, was promptly dragged into the post-Sept. 11 bubble and America's security obsessions. We know well the waffling on or downright abandonment of many of his campaign promises: ending the wars in Iraq and Afghanistan, pushing the Israelis and Palestinians toward peace, closing Guantanamo, and restoring the balance between our personal freedoms and our national security.

For much of U.S. history, African Americans have been a strong dissenting voice on foreign policy, whether it was the settlement of free blacks in Liberia, the U.S. occupation of Haiti, British rule in India, the Israeli-Palestinian conflict or African liberation movements such as the struggle against apartheid. As early as 1900, Marcus Garvey and W.E.B. Du Bois were lending their support to groups like the Pan-African Association (pdf), which linked the fate of Africans under colonialism with the treatment of African Americans at home.

After World War I, African-American leaders tried, and failed, to bring the treatment of black Americans into the discussion at the Paris Peace Conference. Black American leaders strongly supported Haile Selassie's struggle against Italy in Ethiopia, as well as Indian efforts to throw off British rule. And while African Americans participated enthusiastically in World War II, the NAACP, the National Urban League and the Brotherhood of Sleeping Car Porters pressured their government to end discrimination at home and to stand against colonialism abroad. The U.S., however, mostly kept its distance from those anti-colonial struggles so as not to offend its European allies.

And when America geared up for war after 9/11, African Americans remained the strongest skeptics. In the Boston Globe, Derrick Jackson noted that "before the 2003 invasion of Iraq, major polls showed that African-American support for the invasion was as low as 19 percent, according to the Joint Center for Political and Economic Studies, while white support ran between 58 percent and 73 percent in major polls."

The Black Perspective: Missing in Action?

That's what makes the silence today so startling. Rep. Cleaver concedes that the CBC has said little so far about Tunisia and Egypt, arguing that events have moved too fast and admitting that the overwhelmingly Democratic group wants to avoid making statements that might appear anti-Obama. He notes that Rep. Donald Payne (D-NJ), a former head of the House Subcommittee on Africa and Global Health, is vocal on many international issues. But with white Republicans taking over House subcommittees, caucus members will have far less impact over the next two years.

The CBC's hesitancy also reflects a recent shift in the role of African Americans in foreign policy from outsiders to insiders. After all, both of President George W. Bush's secretaries of state — Gen. Colin Powell and Condoleezza Rice — were black. But the result has been the diminution of an American voice that gave people abroad hope that at least some of us were sympathetic to their struggles.

On the other hand, the fact that African-American politicians and other leaders have recently been unable or unwilling to make themselves heard on human rights issues may not matter much now to those yearning for freedom. The revolutionary impulse around the world no longer depends on what American politicians — black or otherwise — say or don't say. The global village created by satellite dishes and social media no longer cares about the official narrative.

Some U.S. experts and Arab governments have tried to blame Arab network Al Jazeera for fanning the flames of revolt. But U.S. media can also convince citizens abroad that grinding poverty and oppressive rule are not inevitable. I remember sitting with friends in Haiti some years ago, watching the Democratic National Convention on television. Several had tears in their eyes as the delegates voted state by state for their candidates. "Why can't we do that?" one friend asked.

In Tunisia, Egypt and elsewhere, they're taking the first step toward doing that — with or without help from America's political establishment.