Accessibility links
Homeless Camp Puts Down Roots With Seattle's OK Nickelsville, a camp that houses 100 of Seattle's homeless, has had to move about 17 times in three years. A former mayor tried to shut it down. Now city officials have designated a vacant lot for the camp — but some say a permanent tent city is not the answer to the problem. 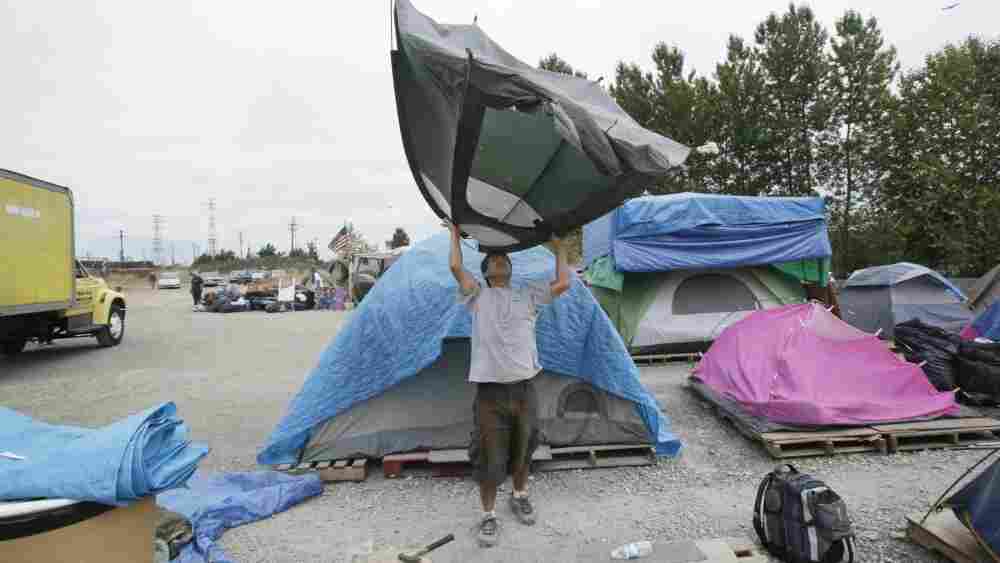 In July 2009, Ion Gardescu lifts up his tent to shake debris out as he breaks camp at Nickelsville. Ted S. Warren/AP hide caption 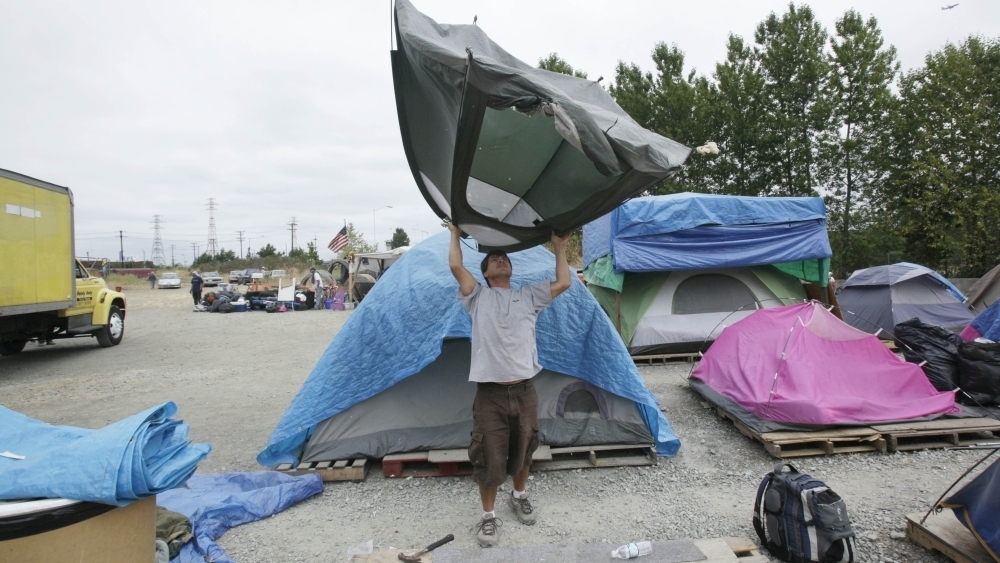 In July 2009, Ion Gardescu lifts up his tent to shake debris out as he breaks camp at Nickelsville.

A lot of cities view homeless encampments like weeds that have sprung up in the civic garden. Sacramento and Fort Worth, for example, have shut them down.

Seattle, though, is taking a different approach: It wants a city-run camp on city-owned property.

But some locals are criticizing the project for being at odds with the city's own plan to end homelessness.

'There Needs To Be A Place For Them'

Seattle's camp is dubbed Nickelsville — as a jab at the city's former mayor Greg Nickels, who tried to shut it down. The camp came together about three years ago and has moved 17 times since then.

On a recent Sunday night, Nickelsville was full to capacity. About 100 of Seattle's more than 8,000 homeless people live there. For now, it's set up at an old firehouse in the city's north end, next to a stretch of strip malls. The parking lot is packed with tents.

Around 6 p.m., people start to wander inside.

I've seen people come in here with their heads down. Then they're elected to something. And they see that they can participate in making things better, to help solve the issue of homelessness.

Peggy Hotes, one of Nickelsville's organizers

"Nickelsville does take pets and children," says Peggy Hotes, one of the camp's organizers. "I think we have around nine dogs and eight cats."

There's a room for people with pets, several sleeping areas, and a big kitchen. Residents cook meals together. On this evening, one of the residents cooked red beans, greens, rice and cornbread.

Residents also share in the camp's management. Hotes thinks that helps people get back on their feet.

"I've seen people come in here with their heads down," she says. "Then they're elected to something. And they see that they can participate in making things better, to help solve the issue of homelessness."

One camper named Michael was recently elected to a leadership spot. He asked NPR not to use his last name because it could hurt his chances with prospective employers. He lost his job as a building engineer last summer, then moved here when he couldn't keep up with his rent.

"I want to see people trying to get out of Nickelsville and not into Nickelsville," he says.

Asked whether that happens enough, he says, "Enough is a hard question. Some people may never get out of Nickelsville, but there needs to be a place for them, too."

That's a perspective city leaders have recently started to share.

The city has designated a vacant lot where the camp can put down some roots. It's next to a freeway in Seattle's industrial south end.

"Come 5 or 6 o'clock, everybody goes home," says Mike Peringer, who owns a shop nearby and is also president of the neighborhood's business association. "There's no supermarket anywhere, there's no drugstore, there's nothing. We're not anti-homeless camp. The issue is location."

The location, Peringer says, is basically the entrance to the city. 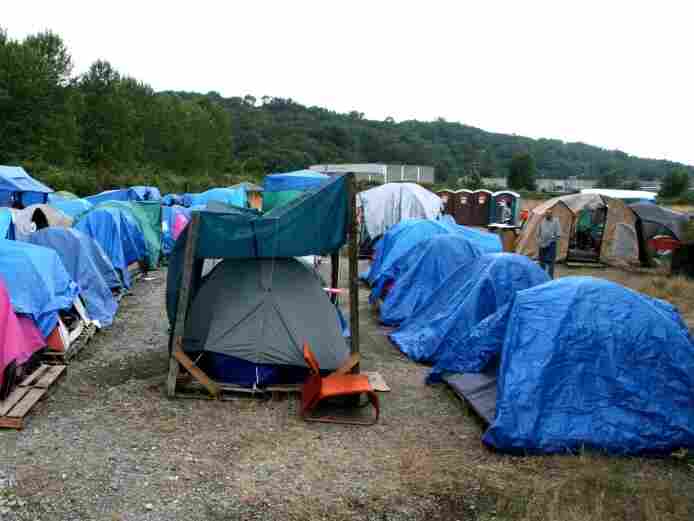 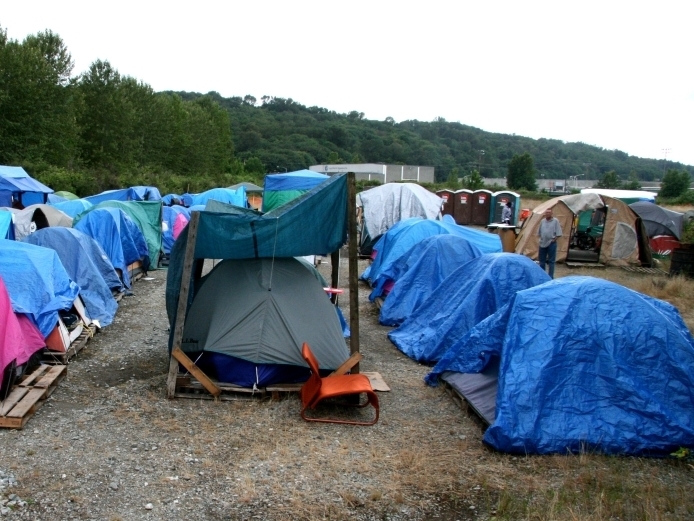 Nickelsville houses about 100 of Seattle's more than 8,000 homeless. There's a room for people with pets, several sleeping areas, and a big kitchen.

Seattle's Deputy Mayor Darryl Smith admits that a permanent tent city is not the ideal response to homelessness. But he thinks it's worth a try.

"No one seems to have come up with a perfect situation or a perfect location to do something like this," he says. "But we don't want excellent — what we're grasping for ... [is] something basic that can really help people."

Smith says if the camp is effective, the city could make it permanent.

A Model In Oregon

The vision for Nickelsville is often compared to another homeless camp in Portland, Ore., called Dignity Village. It's been around more than a decade.

Nick Fish, who heads the Portland Housing Bureau, calls the camp successful, even though 70 percent of people who leave are still homeless.

"That particular statistic is of some concern," he says. "On the other hand, for the people that are living there today, they have a better place than the street to call home. What I tell people is, 'Look at the big picture.' Dignity Village is a very, very small part of our overall strategy."

The strategy for Nickelsville in Seattle is still taking shape. The city envisions people will stay in tents. But Michael, the homeless building engineer, wants something more permanent. He's building some model houses, about the size of a garden shed, to show the city.

It's not a tent. It's a tiny home, built of wood. And however small, to Michael, that means stability until he can figure out what's next. And for others, who might need to move in after he moves on.