Accessibility links
The New Republic: The Failure Of US Aid In Egypt David Reiff of The New Republic looks at the ways that U.S. foreign aid money has been spent in Egypt, and argues that development and economic assistance has ultimately been a moral failure — and perhaps if aid money had been handled better, Cairo could have already been moving toward democracy.

The New Republic: The Failure Of US Aid In Egypt

The New Republic: The Failure Of US Aid In Egypt 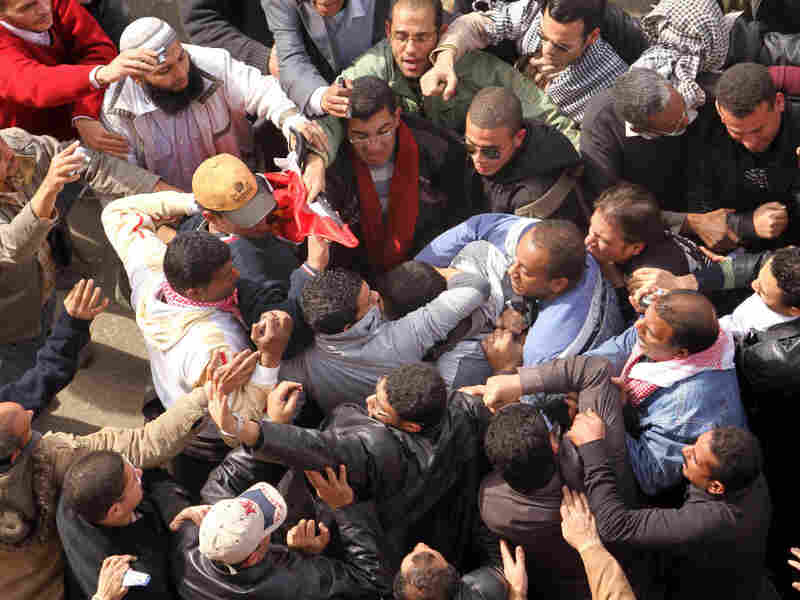 Egyptian protestors opposed to President Hosni Mubarak detain a government supporter during protests near Cairo's central Tahrir square. Some now wonder if past U.S. foreign aid to Egypt could have been handled in a better way to get Cairo moving toward democracy. Miguel Medina /AFP/Getty Images hide caption 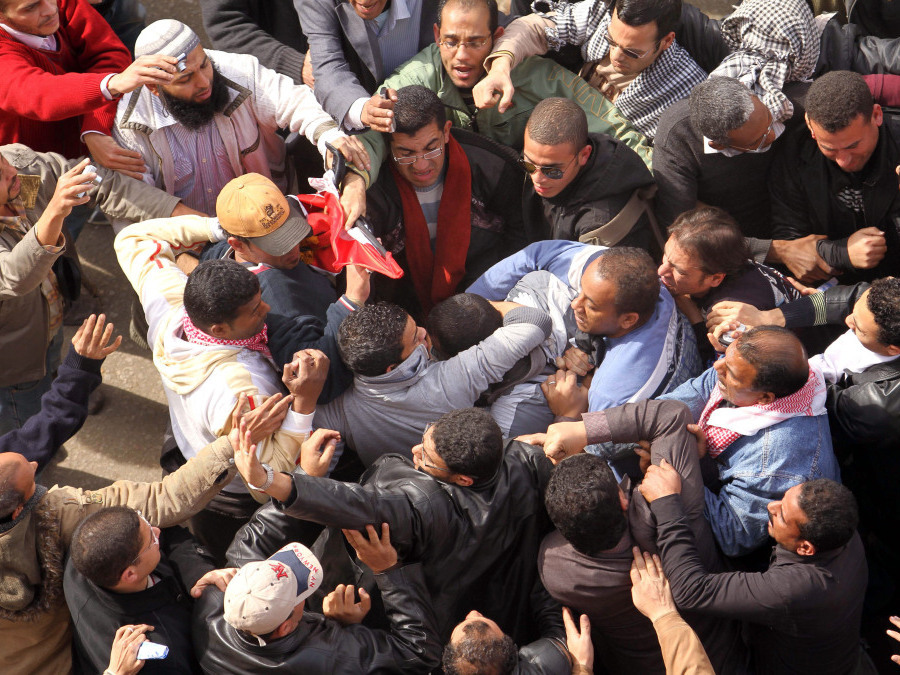 Egyptian protestors opposed to President Hosni Mubarak detain a government supporter during protests near Cairo's central Tahrir square. Some now wonder if past U.S. foreign aid to Egypt could have been handled in a better way to get Cairo moving toward democracy.

David Rieff is a contributing editor for The New Republic.

If you go to the website of the U.S. Agency for International Development (USAID) and click on "Our Work," you will find the following statement: "USAID works in agriculture, democracy & governance, economic growth, the environment, education, health, global partnerships, and humanitarian assistance in more than 100 countries to provide a better future for all." Secretary of State Hillary Clinton made the same claim even more grandiloquently when, in her preface to the (Pentagon-modeled) State Department first Quadrennial Diplomacy and Development Review, she asserted that the Department was committed to "harnessing our civilian power to advance America's interests and help make a world in which more people in more places cab live in freedom, enjoy economic opportunity, and have a chance to live up to their God-given potential."

One does not have to embrace the cynical old axiom that the definition of diplomats are people who go abroad to lie for their country to realize how hollow to the point of obscenity these claims must seem to the pro-democracy demonstrators in Tunis, Cairo, Alexandria, Amman, and even Sana. Even if one puts the best face on U.S. policy in the region, adding the psychologically more accurate corollary that this lying includes lying to oneself, and that the diplomats in question have genuinely good intentions, the gap that the demonstrations in the Arab world have exposed between the way in which U.S. diplomats and development workers seem to conceive of what they do, especially in regions like Egypt and Jordan that are of geo-strategic importance to Washington, and what the historical record shows them to have done, and, worse, not done, could scarcely be wider.

It is true that, since 1975, USAID has provided a total of $28 billion in economic and development assistance to Egypt. But, while on the micro-level many of these programs have been well-designed, and enjoyed a measure of success, on a macro-level, the facts permit only one conclusion: on its own terms, U.S. military aid to Egypt has been a success, but U.S. development aid to Egypt by any objective measure has been an abject failure.

U.S. military aid to Egypt — which averages $1.3 billion annually, and which this week allowed Egyptian police and paramilitaries to bombard protesters with volley after volley of tear gas made by Combined Systems International of Jamestown, Pennsylvania — may be grotesque in the objective sense because Washington has provided the Egyptian armed forces with such weapons platforms and systems as F-16 fighter aircraft, Abrams Main Battle Tanks, Apache attack helicopters, anti-aircraft missile batteries, and much else, precisely so these weapons will not be used against Israel. A March 2009 cable from the U.S. Embassy in Cairo that was made public by Wikileaks summed up both Washington's rationale for the aid and President Mubarak's expectations about it with admirable clarity. It is worth quoting in some detail:

"President Mubarak and military leaders view our military assistance program as the cornerstone of our mil-mil relationship and consider the USD 1.3 billion in annual FMF as "untouchable compensation" for making and maintaining peace with Israel. The tangible benefits to our mil-mil relationship are clear: Egypt remains at peace with Israel, and the U.S. military enjoys priority access to the Suez Canal and Egyptian airspace. We believe, however, that our relationship can accomplish much more. Over the last year, we have engaged MOD leaders on developing shared strategic objectives to address current and emerging threats, including border security, counter terrorism, civil defense, and peacekeeping. Our efforts thus far have met with limited success."

Whatever one thinks of these "tangible benefits," and the wisdom of continuing an aid policy with a strategic but with no strictly military rationale, at least there were some, as Israeli discomfiture with the prospect of the end of the Mubarak regime has amply demonstrated. And at least Washington has been coherent. At a joint press conference Secretary of Defense Robert Gates held with President Mubarak in Cairo on May 5, 2009, after opining that "multiple American presidents and administrations have benefited from [Mubarak's] wise counsel," the secretary went on to say that, while the Obama administration was supportive of human rights, as "the United States always is," the position of the administration was that "the foreign military financing that's in the budget should be without conditions." Of course, a more honest answer would have been that, while there were indeed no specific conditions, there was, as the Wikileaks document showed, a quid pro quo understood by both sides.

Meanwhile, according to the U.N. Human Development Index, Egypt ranks one hundred and first, between Mongolia and Uzbekistan. In the context of the Arab Middle East, it ranks tenth, below not just rich countries like Kuwait and Saudi Arabia, but behind Libya, Jordan, and Algeria as well. According to Isobel Coleman of the Council on Foreign Relations, over the past decade, Egypt has experienced rising income inequality while failing to address root poverty. Ordinary Egyptians, she writes, simply not feel they were "reaping the benefits of [their country's economic] expansion." Food prices are rising to levels not seen since the global food crisis of 2007-2008, a recent World Bank study showed that the higher educational system is doing a very poor job of producing qualified graduates, and, whatever their qualifications, unemployment among the young is well over 30 percent nationally.

And yet, go to USAID's website and find the Egypt page and you will read that, "For three decades, the United States and Egypt have collaborated closely on economic development and regional stability." You will also read the grotesque claim that "USAID has helped Egypt become a "success story in economic development." More specifically, the site claims particular success in improving the quality of education, and, grotesquely, in light of recent events, taken the credit for having strengthened "the administration of justice," improved "access to justice for disadvantaged groups," and promoted "decentralized governance and more competitive electoral processes."

Washington seems never to have believed that any quid pro quo should have been demanded in return for the $28 billion USAID provided over the past 36 years. And yet, there is absolutely no reason why successive U.S. administrations should not have made this assistance conditional on, say, a serious attempt by the Egyptian government to curb corruption. It is not as if Mubarak would have then said, "That's it, I'm breaking ties with Israel, lifting the Egyptian blockade of Gaza, and seeking a rapprochement with the Iranians." But no American administration has ever attached the same kind of conditions to development aid as it has to military assistance. And today, as the end of the Mubarak regime is in sight (whether or not he succeeds in holding on to power for a while longer), the true cost of that passivity is can no longer be concealed, or wished away, or covered up by risible claims posted on the USAID website.

And this is not just an Egyptian story, or a failure of U.S. strategic thinking limited to the particular exigencies of the Middle East. To the contrary, exactly the same lack of conditionality, tolerance for corruption, and passivity before injustice marks U.S. development aid in Afghanistan and Pakistan — that is, in the central theaters of the long war. The Pentagon may talk in an updated counterinsurgency doctrine that is more focused on winning the support of the people than on kinetic operations against the enemy, and Secretary of State Clinton may argue that America's security is best served by the deployment of civilian, rather than military power. But the reality is that development only succeeds when a poor country commits itself to development. And, without any naïve claim that only democracy can lead to durable development — China disproved that, after all — that commitment does first and foremost involve the ruling elite of a country like Egypt or Pakistan committing itself to at least creating economic opportunity for the broad masses of the country, not a privileged few.

Did Washington not think that a situation in which it was the Muslim Brotherhood that provided a huge part of the social safety net in urban Egypt was untenable? Apparently not. Perhaps it was all that "wise counsel" they were getting from President Mubarak. If anything, things are worse in Pakistan. According to a report issued this January by the International Federation of Red Cross and Red Crescent societies, more than four million people remain homeless six months after last year's floods. And, in those regions, Islamist charities are often the only providers of medical services, shelter, and food that is not prohibitively expensive for most internally displaced people. And yet, while the U.S. government would certainly like to see something done (rather as it would have "liked" to see less corruption and torture in Egypt), it has not put anywhere near the pressure on the Pakistani government to alleviate these people's suffering that it has in pushing Islamabad to escalate its military operations in the tribal areas of Pakistan along the Afghan border.

You get what you pay for, I suppose. Cynicism aside, this is not only a moral scandal, it is a geo-strategic blunder of huge proportions.