Accessibility links
'Chicago Code': This Time The Good Cops Get A Shot Shawn Ryan's first series, The Shield, starred Michael Chiklis as a corrupt cop. His new series The Chicago Code is also about cops — but this time, they're honest. And TV critic David Bianculli says the heroes (played by Jennifer Beals and Jason Clarke) turn in very strong performances. 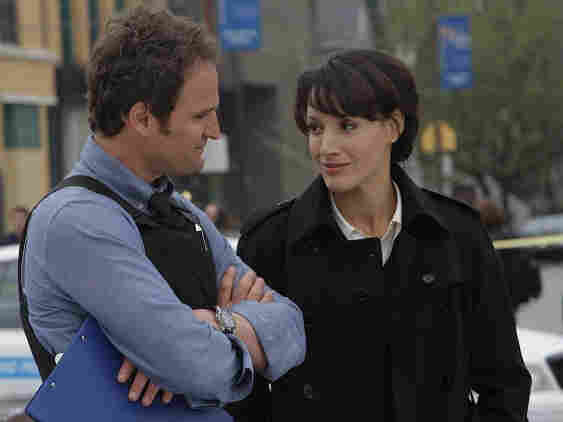 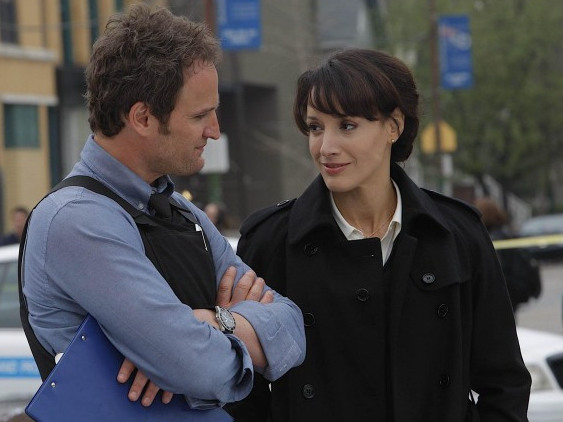 If you watched the Super Bowl on Sunday, you saw plenty of promos for the new cop show from Shawn Ryan and the Fox network. It's called The Chicago Code, and it's kind of the flip side of Ryan's first cop drama, The Shield — and it may turn out to be just as compelling.

In The Shield, Vic Mackey (Michael Chiklis) and company were corrupt cops who would even kill their fellow officers to protect their power base and their often ill-gotten gains. Yet over the years, we rooted for Vic Mackey rather than for the various police captains and lieutenants who tried to expose and fire him. He was like Tony Soprano with a badge — it was easy to like the guy, so long as you didn't look too closely.

The Chicago Code, premiering Monday at 9 p.m. ET, flips that equation. In this show, the big corrupt figure is Alderman Ronin Gibbons, played by a smooth-looking Delroy Lindo (Get Shorty). He has the makings of a classic TV villain, and he plays each scene with an almost snake-like smugness — like a black Chicago version of J.R. Ewing. Gibbons is the Chicago power broker with his hand in everything — legal or illegal. He recently appointed the city's first female police superintendent, Teresa Colvin (Jennifer Beals), and he expects her to be subservient, naive and easily controlled.

It's the same logic that got Jimmy Stewart appointed as a junior senator in Mr. Smith Goes to Washington — and Teresa's appointment backfires just as quickly. She, too, turns out to be incorruptible and annoyingly persistent, and decides to target Gibbons with a secret investigation. She enlists, as her major confidante, her former partner when she was a cop on the beat — Jarek Wysocki, played by another Showtime cable star, Jason Clarke from Brotherhood. He is reluctant to come aboard until she reveals her hole card: that she knows Alderman Gibbons is working with the Irish mob, because she has a cop working undercover in that organization.

All three of these good-guy cops come from excellent TV shows and turn in very strong performances. Lauria is understated but confident, and lets you see the intelligence behind his character's silences. Beals is strong enough to stand firm while dismissing a veteran cop who is furious at her, yet playful enough at other times to flash a quick smile or a quicker insult. And Clarke, as the moral center of The Chicago Code, is instantly likable.

Well, not instantly. The entire pre-credits sequence of Monday night's pilot — that all-important first impression — is so over-the-top it plays like an expensive parody of a TV cop show, rather than a real one.

But ignore that, let the dust settle and relax, because from that point on, The Chicago Code quickly finds its way. It borrows a little from The Wire, HBO's landmark series about entrenched, corrupted city institutions, and a little from EZ Streets, the vintage Paul Haggis cop series that gave equal weight to its good guys and its bad guys. But those are great places to start.

And what Shawn Ryan is doing here that is quite original — and may be almost revolutionary — is that he is swimming against the current of 21st-century television. These days, almost all of the smart and best shows are on cable, and the best TV talent has defected from broadcast to cable TV. Ryan, who helped lead that revolution, is now reversing field.

There aren't many intelligent shows left on broadcast TV, but there are a few: The Good Wife, 30 Rock and Modern Family. And maybe, just maybe — like a few honest cops in a corrupted system — their presence, and their efforts, can still make a difference.