Accessibility links
Why Some People Evade Colds And Others Don't People who have built up immunity to common viruses are less likely to get sick. But researchers say it's also possible some people are genetically less susceptible to catching a common cold.

During a recent trip across the country, I got a severe cold that took me out of work for a week. My 85-year-old mother, on the other hand, remained healthy. I might have figured that, at her age, my mother was more fragile and therefore more susceptible to getting sick. I figured wrong. 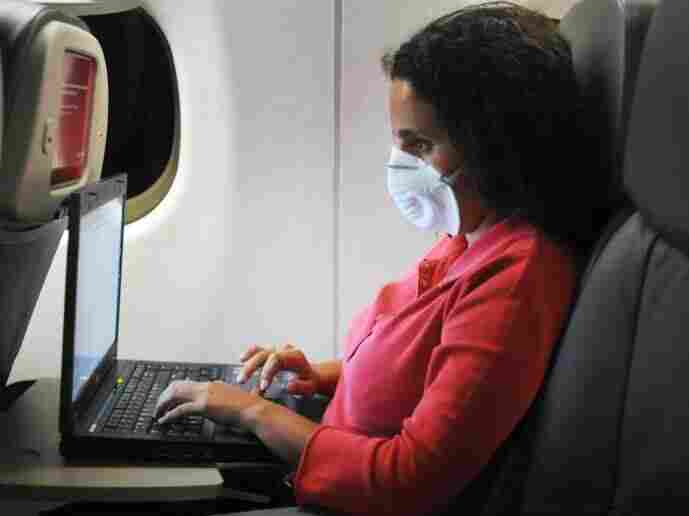 An airline passenger wears a mask to protect against viruses. Passengers are at risk of becoming infected in the airplane's cabin, just as they would be in any crowded, confined space. Eitan Abramovich/AFP via Getty Images hide caption 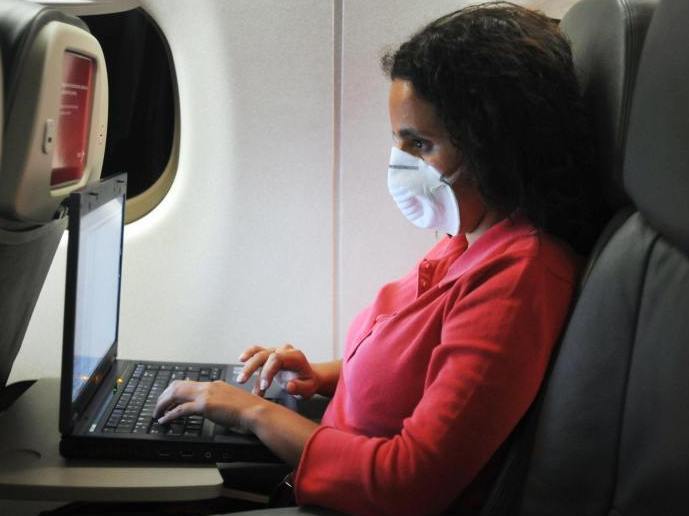 An airline passenger wears a mask to protect against viruses. Passengers are at risk of becoming infected in the airplane's cabin, just as they would be in any crowded, confined space.

It illustrates what many cold experts call the million-dollar question: Why do some people get sick and others in similar environments don't?

There's no cure or effective treatment for the common cold. Over-the-counter remedies may control symptoms, but they don't cure them.

While it's certainly true that our environment can increase our risk of infections, researchers suspect that much of our vulnerability has to do with our genes. For the cold virus itself, some of us humans are easier to infect than our more sturdy counterparts.

So, in infectious-disease labs across the country, researchers are trying to crack the genetic cold code and identify the exact mechanisms that enable cold viruses to make us sick as well as the specifics of how our innate immune systems respond — or don't respond — to the viral mechanisms that make some of us easier targets.

Gregory Poland, director of Mayo Clinic's Vaccine Research Group and a professor of medicine and infectious diseases, says my mother's age was actually her "secret weapon." Poland says she's come face to face with many more viruses over the course of several decades than I. The virus that infected me on the airplane, he says, was likely one of these. Clearly, she has "some level of immunity" to that particular cold virus.

Once exposed, Poland says, most people have lifelong immunity — but only to that one particular cold virus. And, because there are hundreds of different cold viruses, there's also the matter of chance. Are you in the wrong place at the wrong time?

It seems I was. Because cold viruses are airborne, a cough or sneeze a few rows away could have blown millions of microscopic viruses my way. And if I had turned on my little overhead fan, I could have unknowingly blasted those viruses even faster toward me. All I needed to do after that was touch my eyes, nose or mouth and — voila! Infection.

On the other hand, the dangerous liaison could have occurred more surreptitiously. Poland says that perhaps I had gone to the bathroom, opening the door and touching the doorknob after a passenger with a cold did the same thing. Cold viruses, of course, also travel by contact and infect us via an object like a doorknob.

Take the example of any public gathering, Poland says. Say you're in a theater, auditorium or church. "Take your eyes off the speaker for a moment and look at the people around you," Poland says. "And what you'll find is that about every minute or two, people have their hand on their face, a number of them have their fingers in their nose, a number of them will cough or sneeze into their hand, and then what they'll do is turn and extend their hand to you."

This is an example of not practicing what Poland describes as "respiratory etiquette." He says it seems many adults have missed the message children get in school: Sneeze or cough into the crook of your elbow, not into the air and not into your hand.

Stepping Up Exercise Could Help Beat The Cold Virus

All in all, Poland says it's the combination of genetics, immunity and exposure that determine whether you become sick with a cold.

Cure For The Common Cold

John Treanor, a vaccine expert at the University of Rochester, says it will be years before scientists know what really causes a cold.

"One great outcome of really understanding why some people get sick is to develop medicines or vaccines that target those mechanisms and effectively prevent respiratory illnesses or treat them," Treanor says.

And that would be a great leap in cold mechanics, especially when you consider that, according to Poland, the average person spends about one year of their life in bed, sick with a cold.