Accessibility links
Snow Futures: Hedging Bets On The Costs Of Winter In only its second year, a market to trade snow futures contracts is thriving. Businesses from airlines to salt providers are using the market as insurance. And the recent storm will likely make the market even more attractive. 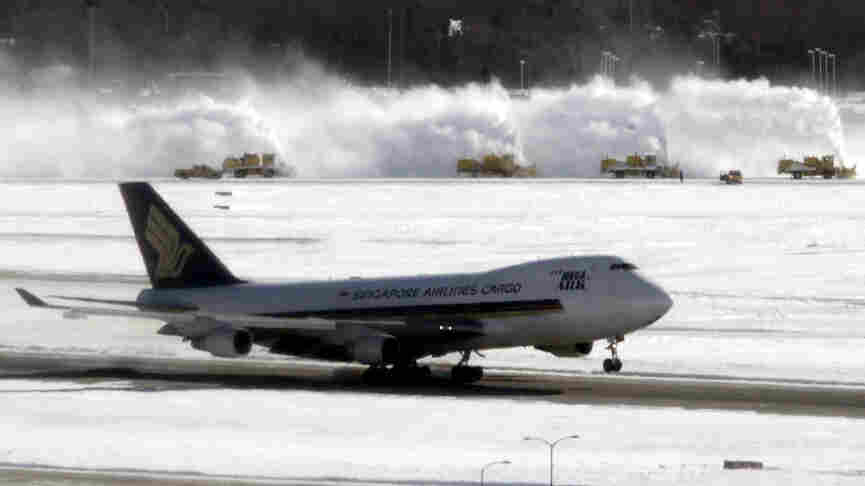 Airlines are using futures contracts to hedge against the cost of snow-related delays and cancellations. Here, a cargo plane takes off at Chicago's O'Hare International Airport, as workers try to clear another runway in the background. Scott Olson/Getty Images hide caption 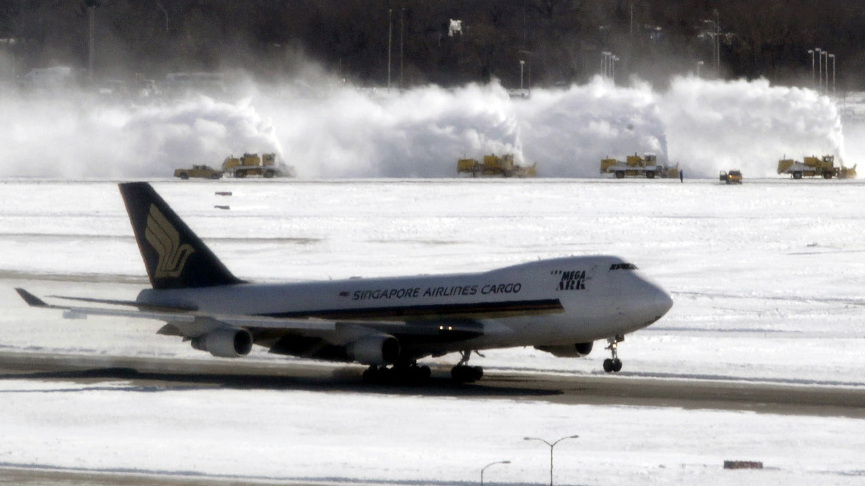 Airlines are using futures contracts to hedge against the cost of snow-related delays and cancellations. Here, a cargo plane takes off at Chicago's O'Hare International Airport, as workers try to clear another runway in the background.

The Blizzard of 2011 has at least one group cheering: the futures market traders in Chicago. That's because for the second year, contracts are being offered based on the amount of snowfall in several cities.

Airlines and other businesses have been using the contracts as a type of insurance policy against the weather.

Business has boomed in its second year — and the recent storm looks to make things even more attractive for the only snow futures market in the world.

For now, derivative contracts are being sold based on the snowfall at six U.S. locations:

The contracts were the idea of a trader in Chicago who saw an opportunity to make money in a blizzard.

After a record snowfall, former Merrill Lynch trader Jeff Hodgson says, he got an idea.

"Wow, this is a storm that I didn't see coming," he recalls thinking. "And I just lost a lot of money on my business — or I could have made a lot of money.

His idea was to create a hedging business for snowstorms. So Hodgson started the Chicago Weather Brokerage in 2009, to help connect that companies want to hedge their bets on how the weather affects their bottom line.

He did this by helping the CME Group create a financial market based on snowfall — they're actually called snow derivatives.

Here's how it works: The average snowfall for winter in Chicago is around 37 inches. So the contracts are like insurance, paying out a set amount of money for every inch over or under, depending on what contract you take out.

"Everybody says you can control everything but the weather," says the Chicago Mercantile Exchange's Tim Andriesen. "Well, we can't control the weather — but we can help you mitigate the risk of weather on your business."

"Our products would allow people to hedge against that extra cost of having to deal with the weather," he says.

The snow contracts trade until March. That's when the Chicago Weather Brokerage shifts to its newest market: hedging rainfall.