Accessibility links
It's Time To Face The Ugly Side Of American Football Sunday's Super Bowl coverage was one of the most watched TV programs of all times. But this year's championship comes at a time when questions are being raised about brain injuries in football players and the impact of the sport on young boys. In her weekly "Can I Just Tell You?" commentary, host and football fan Michel Martin contemplates the future of America's favorite sport. 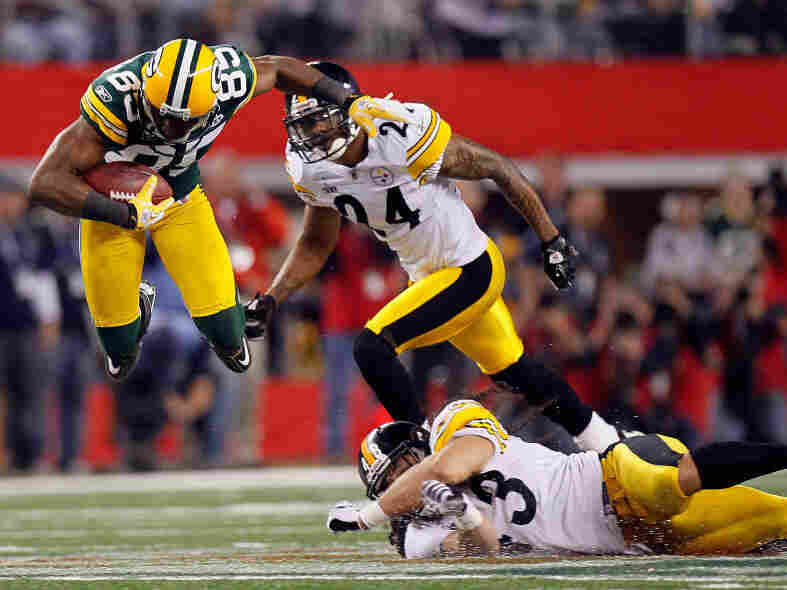 One more word about football, or rather sports. I will start by congratulating the Cheeseheads among us. Super Bowl XLV was a thrilling game, even if the Packers did beat my husband's beloved Steelers. And there's always next year. Or is there?

This is the best of times and the worst of times for American sports, especially football.

Yesterday's was one of the most watched TV programs ever. And although the NFL is facing the possibility of a lockout, when the current contract expires this March, when I say the best and worst of times, that's not what I'm talking about.

What I'm talking about is that people are starting to ask real questions about the real cost of America's favorite sport. And those questions are coming from inside the sport — from the players, or at least former players, and owners, or former owners, and from sportswriters and commentators like ESPN's Michael Wilbon.

In a piece for his former newspaper, The Washington Post, Wilbon wrote that he would not be allowing his young son to play football because the possibility of a brain injury is just too high.

To my mind there is no denying the beauty of the sport, even amid the ugliness of the pain it sometimes causes. Anyone who has raised a child — and especially, I'll just say it, a boy — knows there's something organic about the desire to run, and throw, and tackle and yes, hit and hit hard.

A friend of mine, a former professional player, once tried to describe to me how good it felt to hit really hard and even get hit really hard. Something like an electric thrill.

The grown-ups among us can surely think of analogies. And for the spectators, who can deny there is something incredible about seeing large men throw themselves in the air like gazelles without horns?

But it is time to stop denying the other side of it. The sport is finally coming to grips with the reality of serious and long-lasting brain injury that might start far earlier than many have been willing to admit.

And that's not the only ugliness that starts when the players are kids.

There's also the way youth leagues try to take over the lives of kids as young as 6 — with practices two and three days a week, game days, and even days spent watching film with the coach, not to mention the ridiculously overzealous, abusive parents we have seen in all sports, including the country club sports.

But this might be particularly insidious in sports dominated by poor kids, especially poor black kids, because the people involved are so busy congratulating themselves on how they are saving the kids from ruin.

When I was looking for a team for my son I asked one coach why there were almost daily practices for kids so young. He patronizingly informed me that they were keeping the kids out of trouble. Maybe he could keep them out of trouble by helping them with their homework? No answer.

In countries all over the world, poor kids have lifted themselves and their families out of poverty by playing sports. This country is no different. When former NFL player Deion Sanders was selected for the Pro Football Hall of Fame this year, he said his first thought was not the honor for himself, but his pride at the memory of being able to tell his mother, a cleaning lady, that she would never have to work again.

But it's time to ask whether sports in this country are like oil in the Middle East and Africa. We think sports are making us rich, but are they really making us poor, by keeping us from doing other things that might matter as much or more in the long run? It's an uncomfortable question, but as a fan myself, I have to ask.