Accessibility links
Florida Bans Cocaine-Like 'Bath Salts' Sold In Stores The powder, which is being snorted and smoked to produce a cocaine- and meth-like high, has sent dozens of users to emergency rooms after violent behavior and hallucinations. Louisiana has also banned the product. 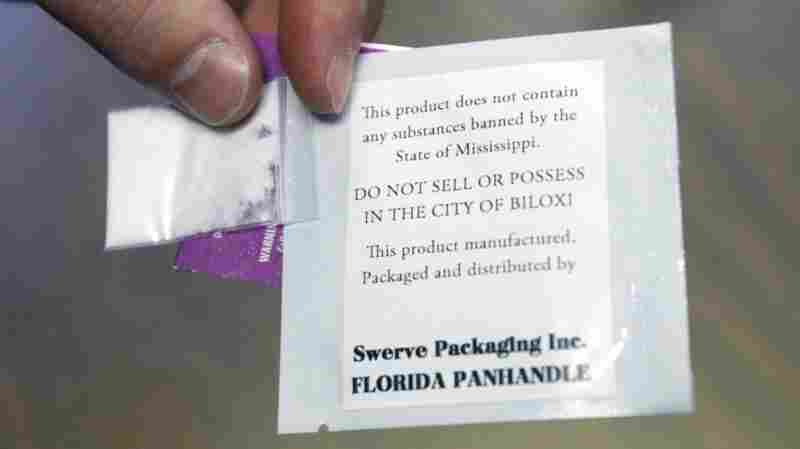 The "bath salts," which are being snorted and smoked to produce a cocaine- and meth-like high, have sent dozens of users to emergency rooms after violent behavior and hallucinations. Florida and Louisiana have banned the sale of the product. Rogelio V. Solis/AP hide caption 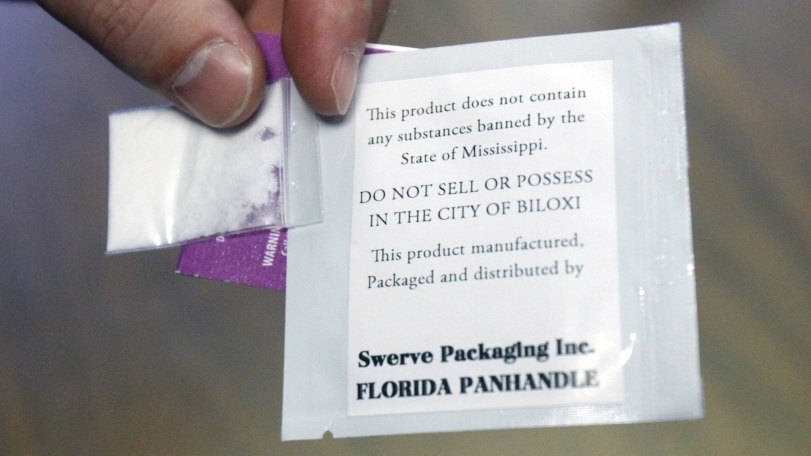 The "bath salts," which are being snorted and smoked to produce a cocaine- and meth-like high, have sent dozens of users to emergency rooms after violent behavior and hallucinations. Florida and Louisiana have banned the sale of the product.

Across the country, packets of white powder with names like Vanilla Sky, Ivory Wave and White Rush are being sold in convenience stores and gas stations. The packets are labeled and sold as "bath salts," but they are actually a drug that produces a meth-like high and sometimes violent behavior in users. Law enforcement has caught on, and Florida recently joined Louisiana in banning the sale of the powders.

Mark Ryan, the director of the Louisiana Poison Center, first heard of a new, legal drug being sold throughout the Southeast in September. Ryan says bath salts are just one way the drug is labeled and sold.

It's almost like a psychotic break. They're extremely anxious and combative, they think there's stuff trying to get them, they're paranoid [and] they're having hallucinations.

They are usually snorted or smoked — not unlike cocaine or methamphetamine. But Ryan says the poison center has also seen it used differently.

"We've also seen it as growth stimulator, PH optimizer, pond scum remover, [and] not deodorizer but odorizer — quite a few different things, but they were never intended to be any of those things," he says.

Ryan says the bath salts are intended to be legal synthetic drugs.

In September, Ryan says, the poison center got its first call from an emergency room unsure about what it was dealing with. Soon, the center and poison control hotlines in Florida, California and all over the nation were seeing several cases a day.

Ryan says users high on this drug are not easy to deal with.

Sold Across The U.S.

The Justice Department says several brands of the bath salts are marketed in all 50 states and on the Internet.

The chemical MDPV, found in the bath salts, can cause paranoia, psychosis, intense panic attacks, hallucinations and addiction.

Florida and Louisiana are the only two states that have banned the salts, but other states are considering it.

There are plans to introduce a bill in Congress to impose a nationwide ban.

The products have already been banned in the U.K.

"For lack of a better term, they're flipped out. It's almost like a psychotic break. They're extremely anxious and combative, they think there's stuff trying to get them, they're paranoid, they're having hallucinations. So, the encounters are not pleasant," Ryan says. "And we were finding that some of these guys couldn't be sedated with the normal drugs that we would use with other stimulants."

In Panama City, Fla., two incidents alerted authorities to the drug's serious effects. In one case, several officers were needed to subdue a man who tore a radar unit out of a police car with his teeth.

In another incident, police say a woman attacked her mother with a machete, thinking she was a monster.

Those experiences alarmed Bay County Sheriff Frank McKeithen. He took his concerns to Florida's attorney general, who filed an emergency rule banning the sale of the bath salts.

At a news conference, McKeithen said the ban will help his department get a handle on what was developing into a significant problem.

"We were all, literally, just absolutely worried to death about what was going to happen in spring break," McKeithen said. "And we still may have issues, but it won't be because they're buying [the bath salts] in the local stores."

The active ingredient in the bath salts is a chemical called MDPV, which Ryan says is similar to cathinone, a compound found in a plant called khat that produces leaves that are chewed in Africa.

"It's a stimulant, much like the coca leaves found in Colombia and South America," Ryan says. But "these substances that we're dealing with aren't organic," he says. "They are designer drugs, synthetic drugs, made-in-the-lab drugs."

The ban was announced in Florida last week, and at least one county has already started seizing the bath salts from retailers, a move that angers store owner Randy Heine.

"These people are out to create crime," says Heine,who owns Rockin' Cards and Gifts in Pinellas Park, near St. Petersburg. "This product was legal yesterday. Today, it's illegal."

Heine says he's been forced to take his stock of the bath salts — worth thousands of dollars — off the shelves because of what he calls a hasty and wrong decision by the attorney general.

"There's no one who should have so much power as to be able to outlaw a product without due process," Heine says.

There's no one who should have so much power as to be able to outlaw a product without due process.

He is working with the Retail Compliance Association, which plans to file a lawsuit challenging the bans in Florida and Louisiana. Meanwhile, a ban is also being considered in several other states.

Heine says he believes many of the stories about the bath salts' effects are exaggerated. He says the product is "not more of a hazard than alcohol. How many people every day try to kill themselves doing alcohol? And that's still legal."

For Heine and for law enforcement authorities, this is just the latest round in what's becoming a familiar fight — one that in the past has involved synthetic marijuana, herbal ecstasy, salvia and other legal highs.

Bath salts, though, have gotten the attention of Washington. The White House drug czar has issued a warning to parents. In Congress, Sen. Charles Schumer (D-NY) says he is introducing a bill that would impose a nationwide ban.