Accessibility links
At End-Of-The Line Prison, An Unlikely Escape Inmates at the William E. Donaldson Correctional Facility in Alabama practice the ancient Buddhist technique of Vipassana. They say the meditation helps them deal with the root of their anger. Inmates who go through the course have a 20 percent reduction in disciplinary action. 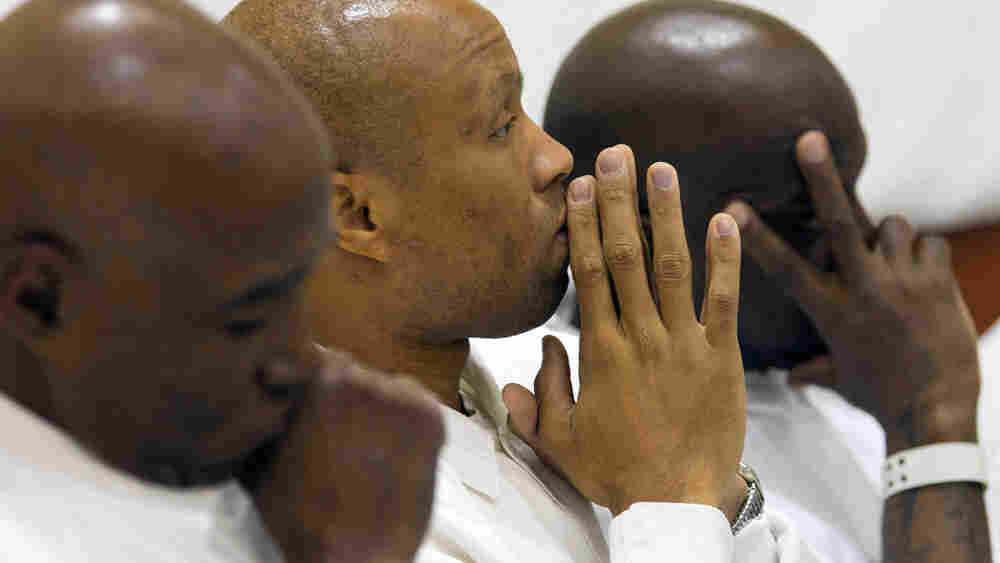 Deep in the Bible Belt, an ancient Eastern practice is taking root in the unlikeliest of places: Alabama's highest-security prison.

Behind a double electric fence and layers of locked doorways, Alabama's most violent and mentally unstable prisoners are incarcerated in the William E. Donaldson Correctional Facility outside Birmingham. Many of them are here to stay. The prison has 24 death-row cells, and about a third of the approximately 1,500 prisoners are lifers with no chance of parole.

"You're dealing with the worst offenses that have been committed by humans in the state of Alabama," says Gary Hetzel, the warden at Donaldson.

The lockup has a history of inmate stabbings, deaths and suicides and is the target of lawsuits. The prison is named for an officer killed there in 1990.

During chow call in the isolation blocks, food trays are slid through a narrow metal box built into the cell doors so the inmates can't hurt the officers feeding them.

'Seeing Things As They Are'

That's a sharp contrast from the scene inside the prison gym, where about two dozen inmates in white pressed uniforms roam freely, working together to clear bed pads from the concrete floor. 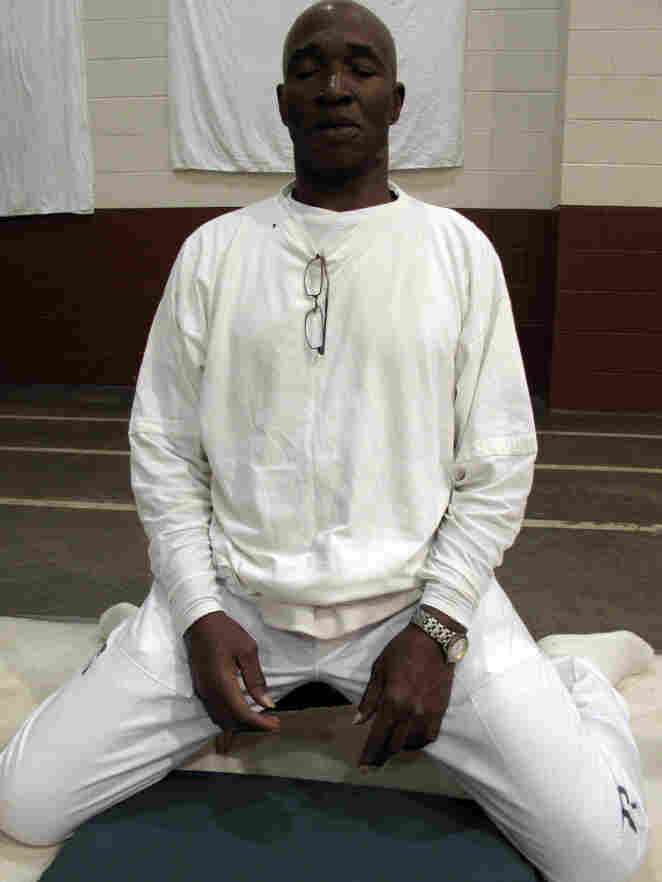 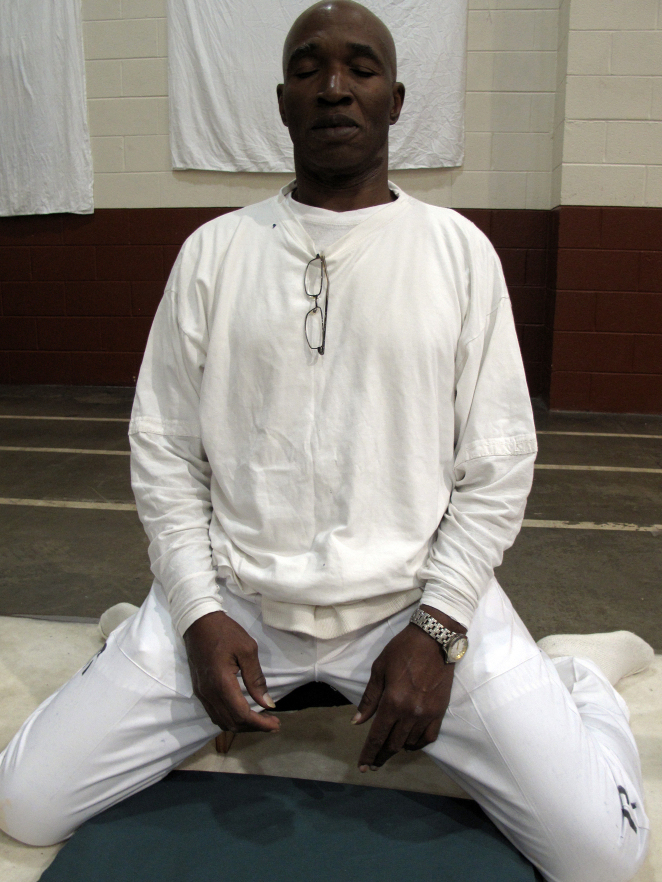 For the past 10 days, the gym has been transformed into a peaceful Vipassana meditation hall.

"Vipassana means seeing things as they are," says inmate Johnny Mack Young, as he kneels on a blue mat, resting back on a small wooden stool. This is the position he keeps for up to 10 hours a day during the intense silent-meditation course.

"For the first three days, the only thing we do is sit and focus on our breath," Young says. "This is to still the mind and get the mind sharp."

Isolated in the gym, the inmates wake up at 4 a.m. and meditate on and off until 9 p.m. They eat a strict vegetarian diet. They can't smoke or drink coffee. And there is absolutely no conversation — only an internal examination of how the body is reacting.

"You'll start feeling little stuff moving all around on your body," Young says. "Some guys can't handle this; some guys scream."

It's a rude awakening for some prisoners, Vipassana teacher Carl Franz says.

"Everyone's mind is kind of Pandora's box, and when you have 33 rather serious convicts facing their past and their own minds, their memories, their regrets, rough childhood, whatever, their crimes, lots of stuff comes up," Franz says.

For Young, a convicted murderer, that stuff includes his childhood role in the accidental death of his baby sister, the fact that he never mourned his mother's death and his crime — a drug-related murder.

"That's one of the things that tortures me," Young says. "We learn this stuff. We learn it too late in life."

Now, age 61 and likely in the last home he'll know, Young says he just tries to have the highest quality of life he can. He says that prior to taking the meditation course, he was in trouble a lot, fighting and trying to escape.

"It changed my life," he says.

"The Dhamma Brothers" is a documentary that filmmaker Jenny Phillips made about the prison meditation program.

Dr. Ron Cavanaugh, treatment director for the Alabama Department of Corrections, says many inmates put their defenses up, denying responsibility for their crimes and blaming others. But the meditation practice, he says, chips away at those defense mechanisms.

"They have nobody to talk to," Cavanaugh says. "So there's nobody that they can deny stuff with or project everything with."

Cavanaugh says inmates who go through the course have a 20 percent reduction in disciplinary action. But it hasn't been an easy sell in Alabama, a state known for harsh punishment policies like chain gangs and hitching posts.

The Vipassana technique, though secular, is based on the teachings of Buddha. Soon after it started at Donaldson about a decade ago, the prison system's chaplains expressed concern that it might not be in keeping with Christian values. The state put an end to the program.

But Hetzel, the warden, saw the dramatic results and brought it back.

"I could see a significant decrease in behavioral problems, acting out," Hetzel says. "The inmates that participated in those previous Vipassana programs seemed to be much calmer, much at peace."

He also has found that they come out ready to help other inmates by volunteering in the prison's hospice unit or leading self-help courses at the prison chapel.

Hetzel says he's convinced the program is not religious, and he has encouraged staff members to take a mediation course to dispel misperceptions.

Donaldson Chaplain Bill Lindsay says he is still skeptical, but he now tries to give Vipassana the benefit of the doubt.

"It's kind of strange — something different," he says.

But he acknowledges that it seems to work.

"That's the main thing," he says. "What is a life worth, see, in this business? So if you can get just one, who knows?" 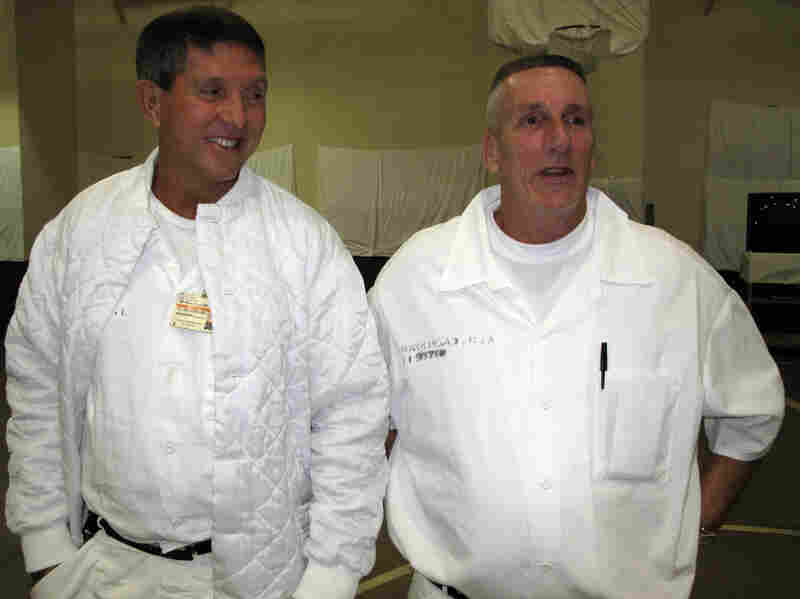 Rick Smith (left) and Grady Bankhead, who participated in the meditation program, are serving sentences of life without parole for capital murder. "We have to have some kind of balance back in our lives from the horrible things that we've done," Bankhead says. Debbie Elliott/NPR hide caption 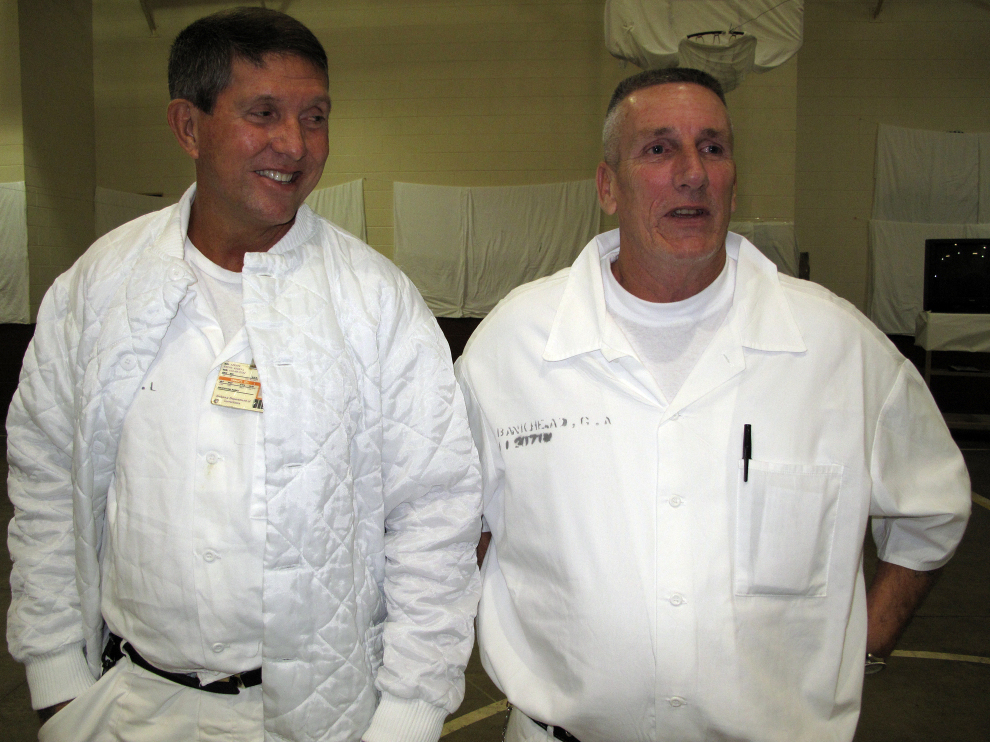 Rick Smith (left) and Grady Bankhead, who participated in the meditation program, are serving sentences of life without parole for capital murder. "We have to have some kind of balance back in our lives from the horrible things that we've done," Bankhead says.

To date, 430 inmates have gone through the Donaldson Vipassana meditation program, the only one of its kind in North America. There's a waiting list for the quarterly sessions, and the state wants to expand the offering to its women's prison.

Filmmaker Jenny Phillips made a documentary called The Dhamma Brothers about the Alabama program and its unlikely marriage of an ancient meditation practice and an end-of-the-line prison.

"They're clashing cultures," Phillips says. "Yet when you bring them together, they fit."

Behind the secure prison walls, Grady Bankhead, 60, says he is walking evidence of that fit. A convicted murderer who came within hours of being executed before winning a new trial, he is now serving life without parole.

"Before I went to a Vipassana meditation, this isn't what Grady Bankhead sounded like," he says. "I was probably the angriest man in this prison."

He says the meditation helped him deal with the root of that anger.

"When I was 3, my mother left my little brother and I out in [the] farmhouse, dressed us up like we were going to Sunday school or church, and said she'd be back in a little while," Bankhead recalls.

He didn't see her again until he was on death row. His brother had died.

"And I blamed me for not taking care of him," Bankhead says.

Now, he's recruiting other inmates to take the difficult course.

"We have to have some kind of balance back in our lives from the horrible things that we've done," Bankhead says.