Accessibility links
Beyond 'The Blind Side,' Michael Oher Rewrites His Own Story Michael Oher's story became The Blind Side, the book, and then it became a movie. In his new autobiography, he brings a little perspective to a story that sometimes left him out of the equation.

Beyond 'The Blind Side,' Michael Oher Rewrites His Own Story

Beyond 'The Blind Side,' Michael Oher Rewrites His Own Story 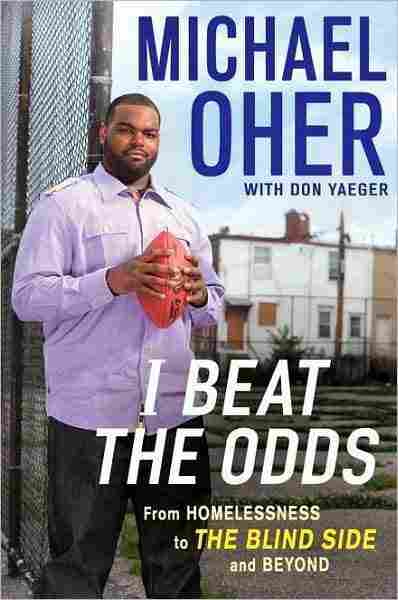 Special programming note: Michael Oher is scheduled to appear tomorrow on NPR's Talk Of The Nation. You can catch him at 3:40 p.m. if you listen to a station that carries the show live.

To readers of Michael Lewis' 2006 book The Blind Side: Evolution Of A Game, Michael Oher — now an offensive tackle for the Baltimore Ravens, once a kid with a crack-addicted mother living in public housing in Memphis — likely seemed deeply enigmatic. He didn't talk much and he didn't want to rehash his past, so he just ... didn't.

To viewers of the 2009 film The Blind Side, which told the story of how Oher came to live with the wealthy Tuohy family, Michael Oher might have seemed ... let's see, how does Oher himself put it in his new book, I Beat The Odds?

To read Oher's own version of his life (ghostwritten by former Sports Illustrated associate editor Don Yaeger) is to witness a real feat of grace: he decisively reclaims control of this story without once taking anything away from his love of or his gratitude for his adoptive family — a family that's been elevated to near sainthood.

In fact, the book is not a list of complaints about how his life has been represented at all.

Well — okay. That's not entirely fair. He has one major complaint. There is one place where the frustration he feels about the distortion of his story is most palpable.

Here it is: Michael Oher is really, really frosted that they made it look like Leigh Anne Tuohy had to show him how to play football.

Oher wrote this book to explain to kids that there is more to escaping a life of great poverty and need than waiting around to be adopted by rich people. He wrote it to recognize some of the other people besides the Tuohys (about whom he writes with tremendous love and devotion) who were so important to the changes in his life. He wrote it to offer advice to those who have heard the story and want to help kids who are in the foster care system.

But if I had to guess what put him over the top, and what made this naturally reticent guy decide to pull the trigger and work on a book about himself, I'd guess it was the scene in the film where Sandra Bullock, as Leigh Anne Tuohy, drags him around football practice explaining what blocking is. Oher devotes only a couple of paragraphs to his reaction to the film, but here's part of what he has to say:

I felt like it portrayed me as dumb instead of as a kid who had never had consistent academic instruction and ended up thriving once he got it. Quinton Aaron did a great job acting the part, but I could not figure out why the director chose to show me as someone who had to be taught the game of football. Whether it was S.J. moving around ketchup bottles or Leigh Anne explaining to me what blocking is about, I watched those scenes thinking, 'No, that's not me at all! I've been studying — really studying — the game since I was a kid!' That was my main hang-up with the film.

But ultimately, what's really interesting about the book isn't just the correcting of the record about his knowledge of football. It's in the title, in fact: I Beat The Odds. It's true, of course. Poverty, foster care, spotty school attendance, living in an unsafe environment with a frequently absent mother — there are a lot of reasons why, statistically speaking, the odds were not with young Michael.

What the story underscores as he tells it is just how many things have to happen for those odds to be overcome. Of course, it begins with Oher himself, and an impressive determination not to repeat his mother's life. (Interestingly, he says he believed from a young age that sports would be his exit strategy, though he originally thought it would be basketball.)

But think about it: Here's a guy who had a certain number of built-in tools to work with. He's intelligent, he's determined, he stayed largely (if not totally) out of trouble, and — oh, right — he has a level of innate athletic ability, as well as a physical build, that has allowed him to become a professional football player.

And yet, when you read his story, what resonates is how many other people had to get involved in order for him to get as far as college at Ole Miss (putting aside the great fame and fortune of the NFL). Let's start tallying.

He had friends who were as determined as he was to get out. He had brothers and sisters who helped keep him alive. He had a social worker who, he now understands, was making tenacious efforts to keep track of him as he was making equally tenacious efforts to evade her. He had foster families which, while very uneven, included some placements where he was exposed to discipline and routine and was made to go to school.

Later, he zeroed in on the Hendersons, a friend's family already living outside the projects that had achieved some of what he wanted for himself, and he stuck close. That's the family that brought him to Briarcrest, the private school where he met the Tuohys. Then Briarcrest accepted him, a variety of school families took him in for a few nights here and there, the Tuohys took him in permanently, he got a private tutor who was utterly devoted to him, he took correspondence courses to bring his grades up ...

This is the picture he's trying to paint in this book. What happened in his life is instructive not because the process was magical like it looks in the movie, but because it's so enormously daunting. This is what was required — this level of heavy lifting by everyone, starting with Oher, and the additional advantages afforded by the Tuohys' willingness to share some of their considerable wealth — this is what it took to turn things around for a guy who started out as an amazing natural athlete with rare gifts and a passionate desire to change his life.

It's not a book to read for the prose, particularly — ghostwriter Yaeger has worked on a lot of sports biographies, and this is written to be very accessible and readable, more than lyrical or literary. But as a story, it's gripping, and as a demonstration of how you take control of the narrative of your own life without taking anything away from the people who have helped you, it's equally impressive.