Accessibility links
Calif. Law Calls For Stricter Prison Cell Phone Rules Although prison policy prohibits inmates from using cell phones in California, their use is still rampant: Thousands of phones were confiscated last year. Now a state lawmaker hopes to make it a crime for prison inmates to have cell phones. 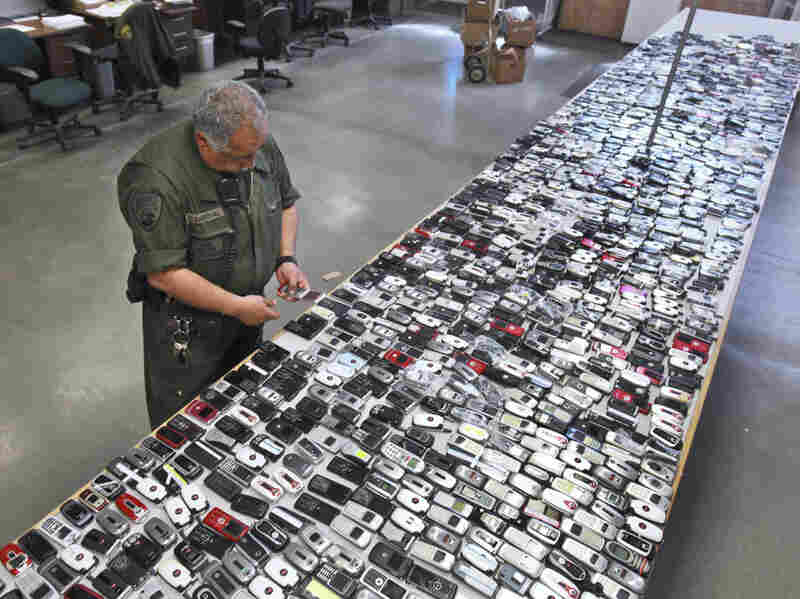 Correctional officer Jose Sandoval inspects one of the more than 2,000 cell phones confiscated from inmates at Calfornia State Prison, Solano, in Vacaville in 2009. One state lawmaker is trying to stiffen penalties for inmates found possessing a phone and for anyone caught smuggling one inside a California prison. Rich Pedroncelli/AP hide caption

By all accounts, California prison inmates are keeping up with technology. Using smart phones, they are texting, surfing the Web and even posting videos to YouTube.

One inmate even shot and narrated a video on his cell phone camera while guards tried to put down a riot; Sacramento TV station KCRA aired the footage last year.

"I gotta go right now," the prisoner-narrator says on the video before he abruptly signs off.

Thousands of these phones have been found, hidden under bunks or even in inmates' pockets. The prisons say it's dangerous because convicts can use the phones to stay in touch with other criminals. But California has yet to find a way to stop them.

"It's really frightening that they would be able to post video from a phone," says Joe Baumann, a correctional officer at the the California Rehabilitation Center, a state prison in Norco. He says 10 to 15 phones are found each week. They're smuggled in in all sorts of ingenious ways.

"We had a case recently where we had a gentlemen pull up to the fence with a football," he says. With a strong arm, the man easily tossed the football over the electrified fence. There were 27 cell phones and chargers stuffed inside the pigskin. Each phone is worth about $1,000 behind bars.

But it's not just outsiders smuggling the thousands of phones into state prisons every year. State analysts say the primary source of unauthorized phones is the prison staff.

Last year, one guard claimed he made $150,000 smuggling phones. He was fired but never charged with anything.

It creates another risk for the employees and inmates in our facilities as well as the public at large.

"It's very frustrating to me that we have people who work for our organization that are willing to risk the lives of their fellow employees," he says. "It creates another risk for the employees and inmates in our facilities, as well as the public at large."

The most notorious inmate caught with a cell phone is Charles Manson. He was caught with a flip phone back in March 2009, then again this past January with yet another cell.

State Sen. Alex Padilla is making his third attempt to criminalize contraband cell phones. He wants smugglers to be fined $5,000 and inmates to get extra prison time.

"Clearly the problem is growing," he says. "It's growing exponentially and bottom line is, every cell phone at the hands of a dangerous inmate is a crime waiting to happen."

Padilla also wants prison guards and staff to go through metal detectors, something they don't do now. But that provision was rejected because of the cost. Guards would have to be paid for the extra time it takes to remove steel-toed shoes and equipment belts, possibly costing millions of dollars a year.

But Padilla faces an uphill battle getting any stiffer penalties, since the state's prisons are jammed and some lawmakers say California can't afford to lock up more people.

"Unfortunately, a lot of my colleagues just have a litmus test, if you will, that any new crimes or any extended sentences they are just going to oppose because of the state's budget situation. I couldn't disagree more," he says.

It may be possible to block unauthorized calls from prisons. But testing of that new technology won't start in California for months.