Accessibility links
Uprising in Egypt Equals Downfall in Tourism The uprising in Egypt has had a devastating effect on the country's tourism industry, one of the main pillars of the Egyptian economy. 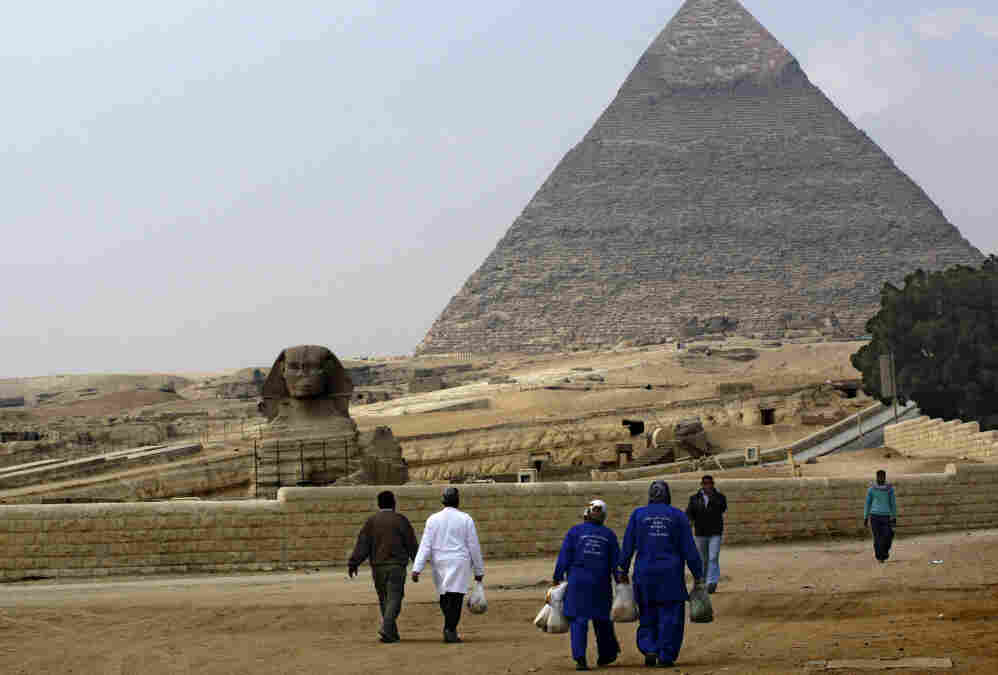 Street cleaners walk through the deserted pyramids site in Giza, one of Egypt's most famous tourist attractions, on Monday. Bertrand Combaldieu/AP hide caption 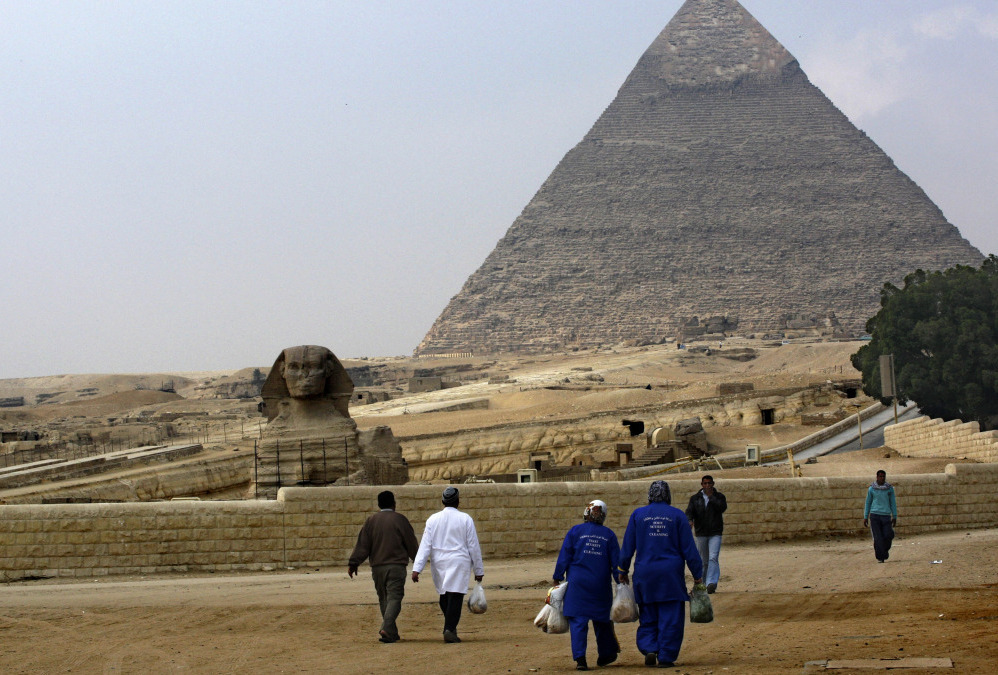 Street cleaners walk through the deserted pyramids site in Giza, one of Egypt's most famous tourist attractions, on Monday.

The uprising in Egypt has had a devastating effect on the country's tourism industry, one of the main pillars of the Egyptian economy.

The Pyramids of Giza are all but deserted.

One of the classic spots in Egypt, the pyramid of Khafre in front of the Sphinx, is devoid of tourists; the entrance to the park is shuttered and closed. A watchman padlocks the main gate to the pyramids after letting a utility vehicle out.

This is the beginning of the high season for tourism, but all of the people who work in the industry are standing around, carrying trinkets, with no one to sell to.

Nearby, those who hire out camels and horses are also suffering. The camels are bedecked with colorful saddles, waiting for paying customers who won't be arriving anytime soon.

The uprising here sparked a massive exodus of tourists, and the loss of revenue could run into billions of dollars. 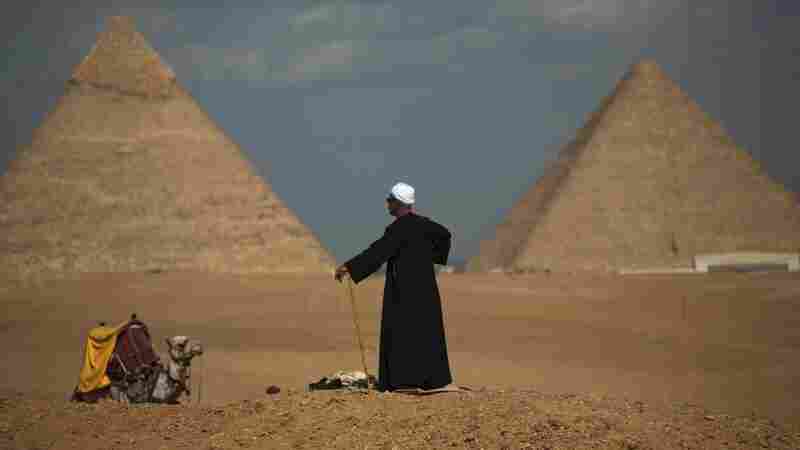 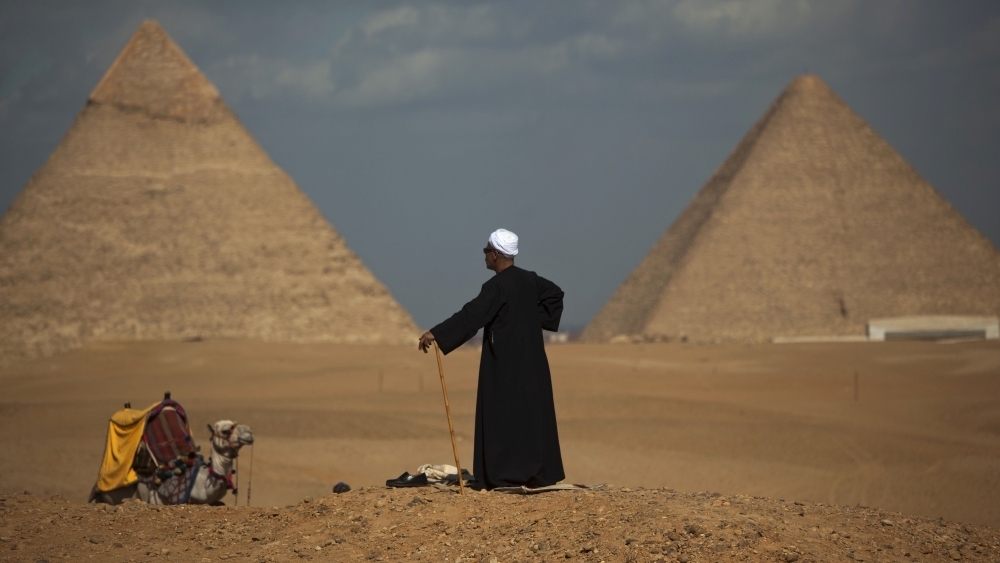 In Giza, camel owner Abdul Mohammed says after two weeks with no income, people can't afford to feed their animals. He says several animals have been left to starve.

"[For] 14 days, people [have not been] working because of this problem," says Mohammed. "If you have the tourists, everybody [would be] happy. You work, have money, have food, have everything."

Amir, 21, also makes his living by giving horseback rides to tourists. He was one of the now-famous riders who charged on the protesters in Tahrir Square last week. He has a cut down the side of his face and a bandaged head. Amir says that despite what people alleged, he wasn't paid by the government to be there.

Amir says he just wanted to draw attention to the plight of tourism sector and was suddenly embroiled in the fight taking place on the square. He says he lost his horse in the charge.

He says it makes him very sad when he sees footage of that battle; he doesn't want that image of violence broadcast to the world because it will scare off tourists.

Not all of the pyramid workers are against the protest movement. Perfume seller Mohammed Hassan says people are afraid to speak openly for fear of reprisals from the state security services. He says there is a lot of confusion about what is going on.

Across Cairo, hotels are empty. At one nearby hotel, the management is taking advantage of the lull to make repairs. Though no one would speak on the record, the manager acknowledged that there was no one to be bothered by the construction noise, as almost everyone has left.

Almost everyone — but not one 24-year-old German tourist from Berlin who refers to himself as "Billy Six" or "Travel Billy." He says he knew there was an uprising but decided to come anyway. He's walking across Africa.

"There is trouble nearly everywhere in Africa, I mean, it's not a new thing here," he says.

He says he's been through some rough times over the past week and was even mistaken for a journalist. "They even took the camera away and it wasn't easy to get it back," he complains.

"They arrested me, sometimes talking and asking a lot of questions," he says. "Many funny people who were very, very, important but they let me out and everything is OK ... Hakuna Matata."

He says he's off to Alexandria next, undeterred by the continuing unrest.