Accessibility links
Obama's Rhetoric: A 'Bear Hug' To Business? In recent public speeches, President Obama has increasingly used words like "investment" and "competitiveness." Linguist John McWhorter says the president's use of that terminology "gives the business world a kind of oral bear hug in some very rhetorically effective ways." 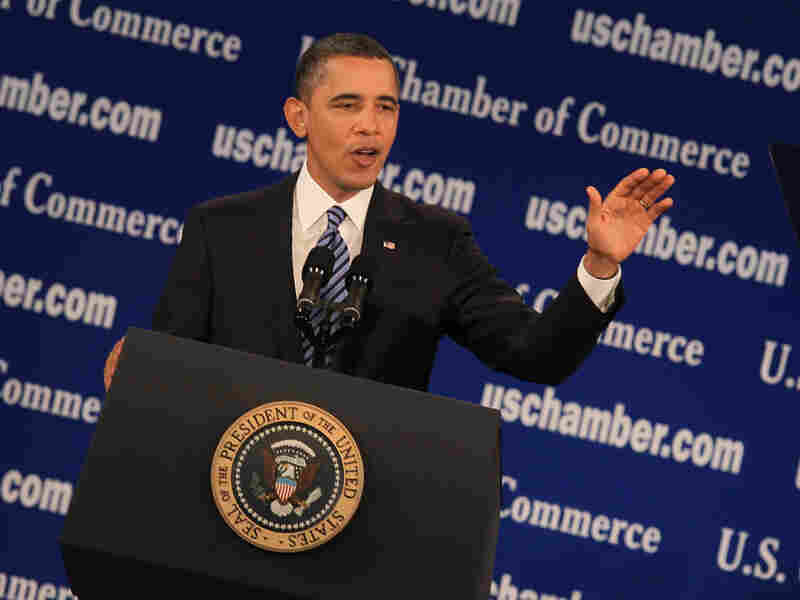 In a speech to the U.S. Chamber of Commerce on Monday, President Obama talked about the importance of working together on job creation and growing the economy. Mark Wilson/Getty Images hide caption 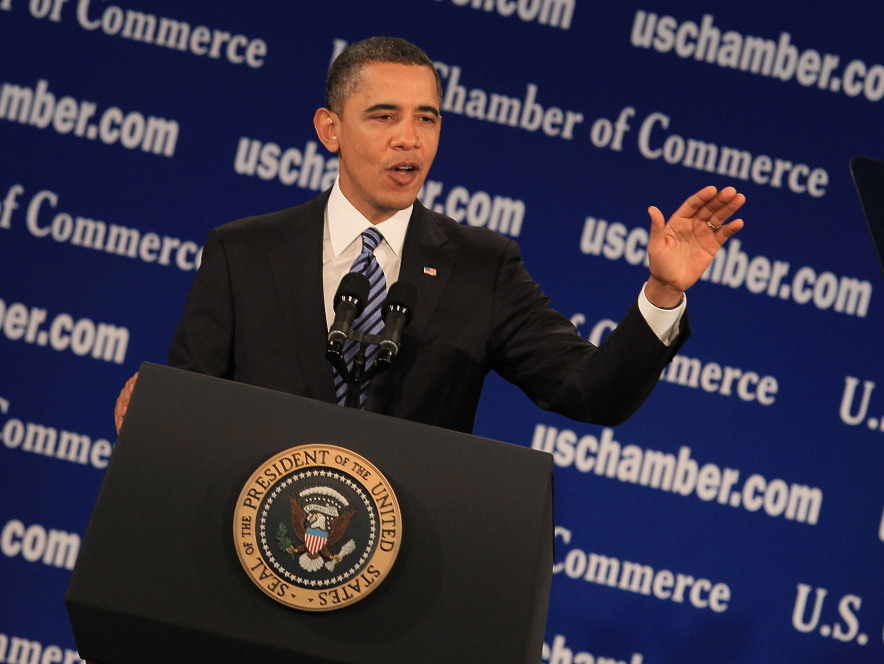 In a speech to the U.S. Chamber of Commerce on Monday, President Obama talked about the importance of working together on job creation and growing the economy.

President Obama in recent weeks has used words like "investment" and "competitiveness" a good deal more in his public speeches. Is the president's use of such business metaphors a sort of code?

"What he does is he gives the business world a kind of oral bear hug in some very rhetorically effective ways," says linguist John McWhorter, author of Our Magnificent Bastard Tongue: The Untold History of English.

What Obama Said (speech before the Chamber of Commerce, Feb. 7): "In addition to making government more affordable, we're also making it more effective and customer-friendly. We're trying to run the government a little bit more like you run your businesses — with better technology and faster services. So in the coming months, my administration will develop a proposal to merge, consolidate and reorganize the federal government in a way that best serves the goal of a more competitive America."

McWhorter's Take: "What's interesting about that statement is that he is implying that the government will change its ways to suit the preference of business, as opposed to, for example, a rather similar speech in intent that Calvin Coolidge made in 1925. And this is the one where he made the famous quote, 'The chief business of the American people is business.' And what's interesting is the complete difference in tone. In his speech, Obama used the words 'we' and 'us' 66 times. Coolidge in his speech used 'we' and 'us' just 28 times."

So does this mean Obama was being chummier in his speech than Coolidge, one of the most famously pro-business presidents in U.S. history? "That is precisely what I'm saying," McWhorter says. Presidents nowadays, he says, "cannot be as saliently pro-business as Coolidge was. Obama has to be more coded."

'The Best Place To Do Business'

What Obama Said (State of the Union address, Jan. 25): "We know what it will take for America to win the future. We need to out-innovate, out-educate and out-build our competitors. ... We have to make America the best place on earth to do business."

McWhorter's Take: "It is a celebration of capitalism right there." The statement also contains the assumption that Americans "have to be the best — which is not necessarily a given," McWhorter says. "That is a coded remark about the Chinese 'threat.' Imagine Denmark saying they have to be 'the best.' "

What Obama Said (speech before the Chamber of Commerce, Feb. 7): "And if there is a reason you don't share my confidence, if there is a reason you don't believe that this is the time to get off the sidelines — to hire and invest — I want to know about it. I want to fix it. That's why I've asked Jeff Immelt of GE to lead a new council of business leaders and outside experts so that we're getting the best advice on what you're facing out there — and we'll be holding our first meeting two weeks from now, on the 24th. Together, I am confident that we can win the competition for new jobs and industries. And I know you share my enthusiasm; I know you love this country and want America to succeed just as badly as I do."

McWhorter's Take: "Note the 'fix', 'win', 'love' and even 'off the sidelines,' the day after the Super Bowl. This is guy talk, very CEO, can-do — it's for what used to be cigar-chomping captains of industry."

Compiled from McWhorter's interview with Inskeep as well as remarks via e-mail.