Accessibility links
Engineers Hone Clean-Energy Stoves For The World Almost half the world cooks its food with solid fuels like wood and charcoal. But these methods are bad for the environment and can be deadly. At a nonprofit organization in Oregon, engineers are building and tweaking stoves that use minimal wood, don't release much smoke — and are cheap enough for the Third World. 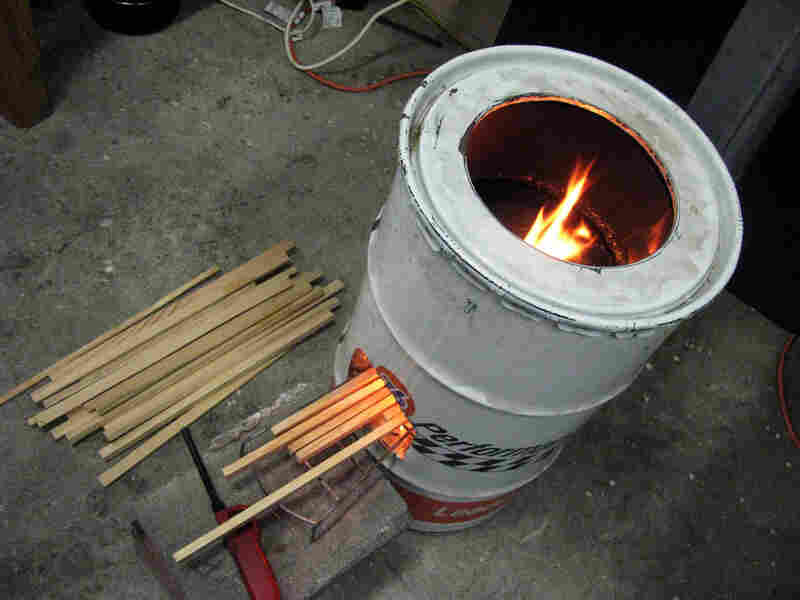 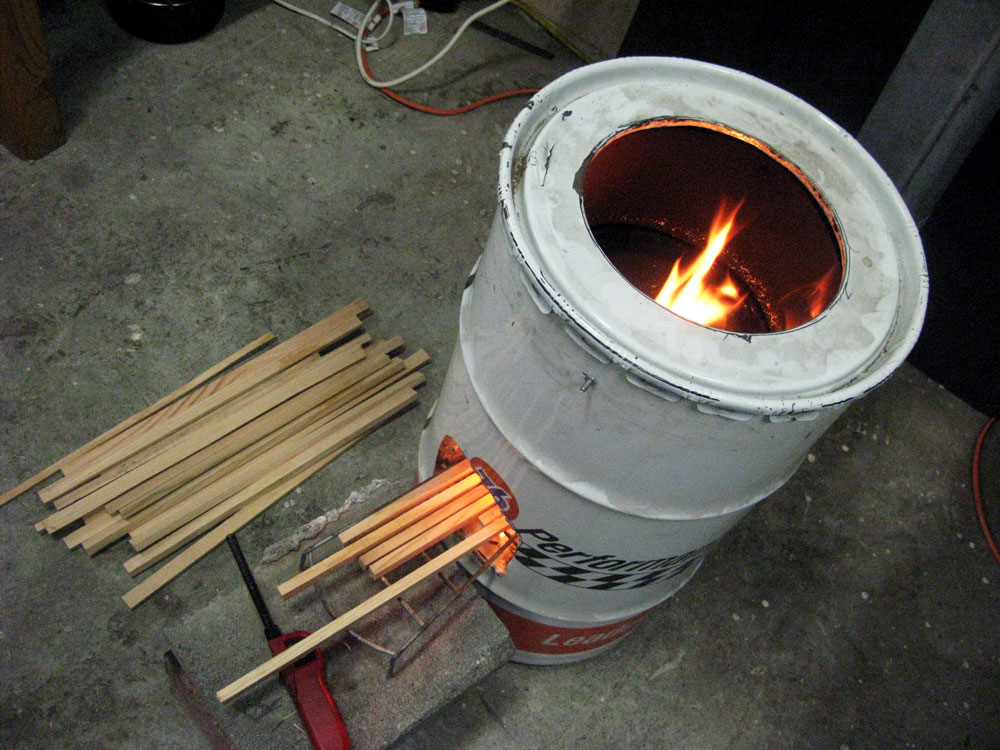 This stove at Aprovecho's lab in Cottage Grove, Ore., has a basic "rocket stove" design built from a 55-gallon oil drum. Its insulated "combustion chamber" is precisely engineered to extract energy from wood.

Almost half the world still cooks its food with solid fuels, such as wood and charcoal.

The results are deforestation and black carbon, which contributes to global warming. And smoke-related disease kills an estimated 1.6 million people a year.

In war zones, the daily hunt for firewood can present families with terrible dilemmas, says Veronique Barbelet of the World Food Programme.

"You hear women in northern Uganda and places like that telling you, 'My choice is between going out there and collecting firewood and being raped, or for my husband to go out and get killed, and I would rather go and get raped,' " she says.

For these and other reasons, the World Food Programme has turned to a small nonprofit organization called Aprovecho.

In a rustic research center near the railroad tracks in Cottage Grove, Ore., Aprovecho builds stoves that use minimal amounts of wood, don't release much smoke — and are cheap enough for the Third World.

'We Don't Know How Fire Works'

Making the stoves is no simple task, says Damon Ogle, a retired mining engineer. He helped build a new large stove that the World Food Programme plans to deploy in refugee camps and schools in Africa. 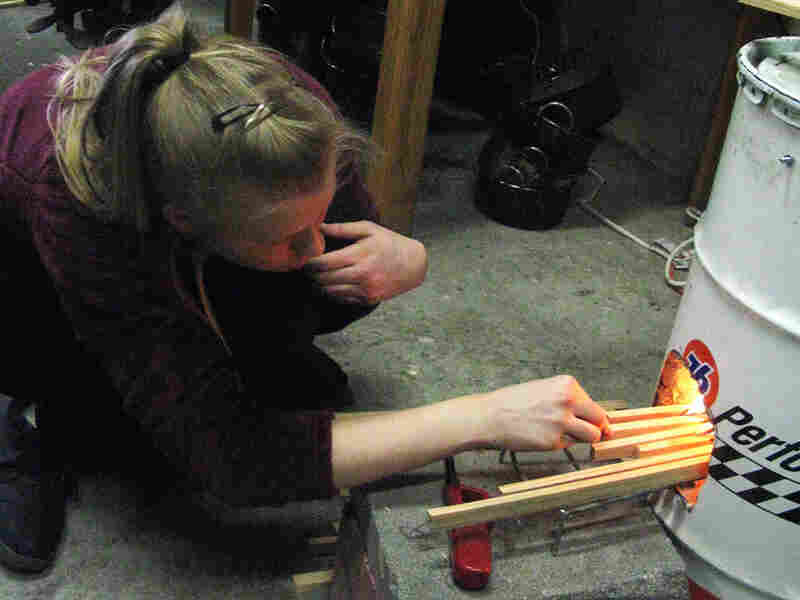 At its lab, Aprovecho teaches people how to test the efficiency and emissions of wood stoves. Martin Kaste/NPR hide caption 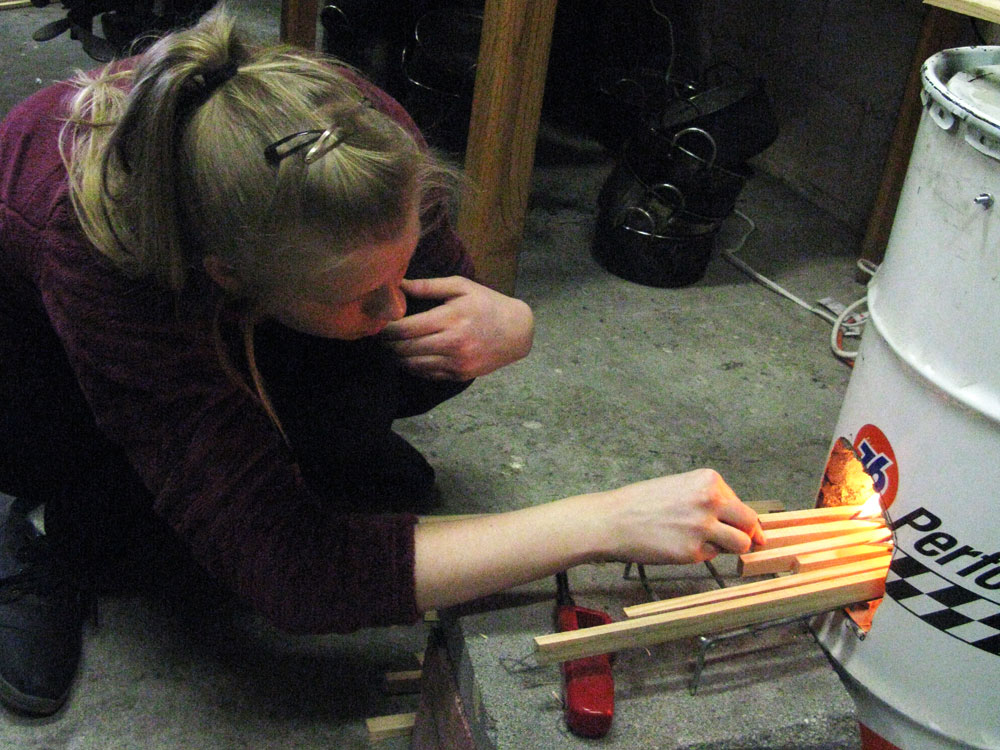 At its lab, Aprovecho teaches people how to test the efficiency and emissions of wood stoves.

"Our ancestors have been making fires for probably 400,000 years," Ogle says. "And we still don't know how fire works."

But Ogle knows more than most. The stove he helped build can cook rice for 20 people with two fistfuls of sticks — up to 90 percent less wood than required by a traditional cooking fire.

"Rocket science is very simple and straightforward compared to what's going on in your fireplace or inside one of these wood-burning stoves," he says.

The stove is made from a steel 55-gallon drum, but that belies the precision engineering of what's inside. A well-insulated combustion chamber made out of a special steel alloy concentrates the fire of just a few sticks of wood. The combustion is more complete than what you'd get in an open fire, burning the particles that usually become smoke. The hot gases are directed around the cookpot. As the water boils, the stove's metal skin and stovepipe barely get warm, an indication of how little heat is wasted.

Aprovecho's stoves weren't always this good. In the late '70s, the group was active in Central America — aprovecho is Spanish for "I make use of." The group taught locals to build a solid-looking clay cookstove dubbed "the Lorena."

Only later did the group discover that the stove's clay walls absorbed much of the fire's heat and actually increased the consumption of wood. 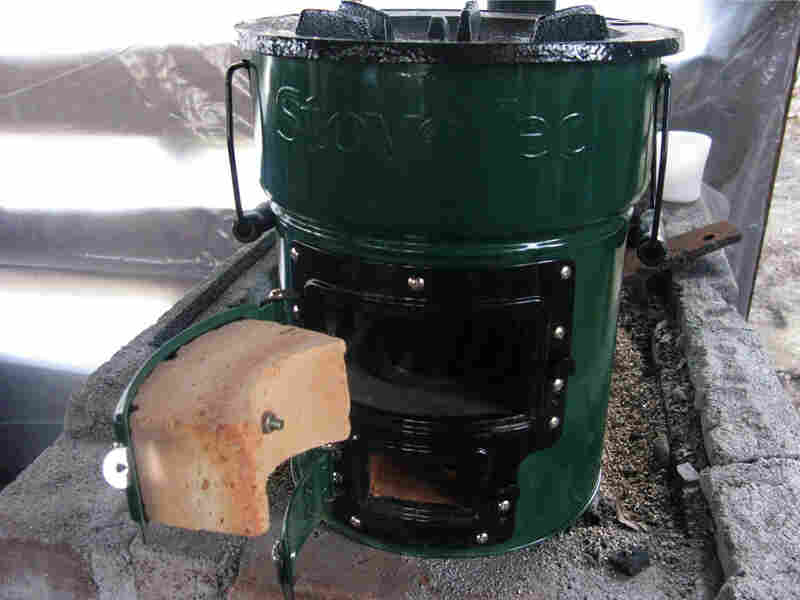 The rocket stove is built and sold by StoveTec, a spinoff of Aprovecho. Martin Kaste/NPR hide caption 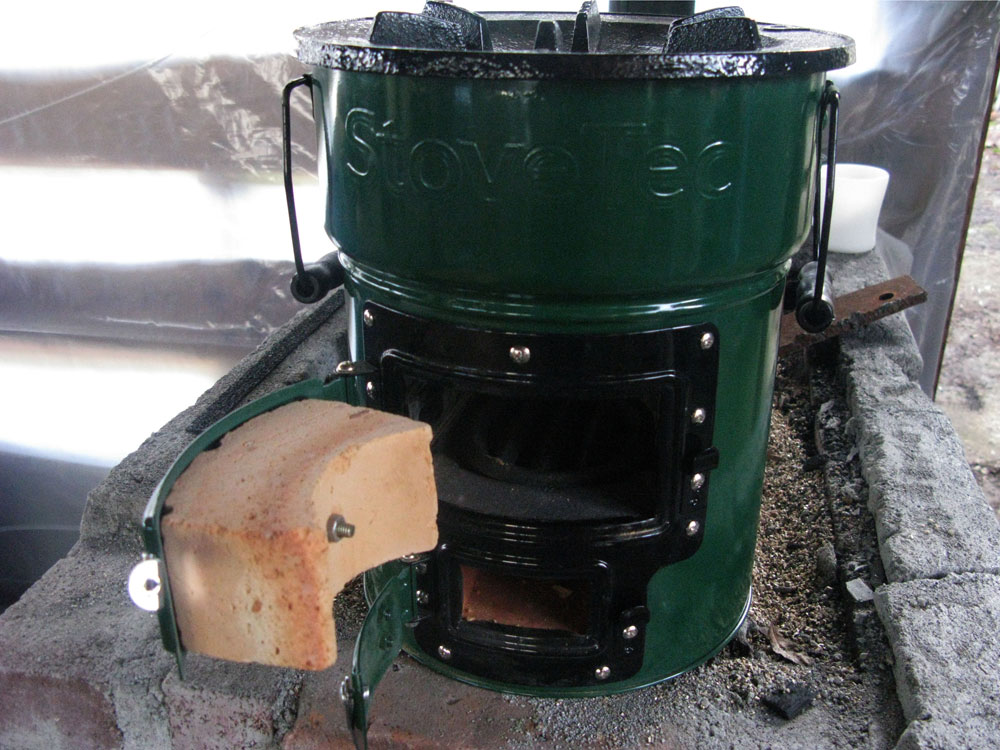 The rocket stove is built and sold by StoveTec, a spinoff of Aprovecho.

The effort was rescued in 1982 by Larry Winiarski, who has a Ph.D. in mechanical engineering. He had recently lost his wife in a traffic accident, and had quit his job with the EPA to stay home in Oregon and raise his kids. But he still wanted to make a contribution.

"I made this deal with the Lord, so to speak. I said, 'I'm going to do what's right,' " Winiarski says. "I discovered Aprovecho, and they had a reputation for doing stoves around the world. And I thought, 'Gosh, I could contribute something there.' "

He certainly could. The "rocket stove" Winiarski invented in the 1980s is the prototype for Aprovecho's current crop of clean, efficient stoves, and his 10 principles have become the catechism for good stove design around the world.

"Aprovecho has been a real and fantastic leader in this field for some time," says Jacob Moss, who runs the U.S. cookstove initiative at the State Department. Besides inventing the rocket stove, Aprovecho has advanced the science of testing stove emissions and efficiency. It may be a group of aging hippies in rural Oregon, but Moss says Aprovecho gets things done.

"Their approach to things is they want to help the world, they're not making any money doing it, and they want to do things rigorously," Moss says.

In the past few years, the movement for clean cookstoves has expanded, fueled in part by concern over global warming. Oil companies are funding stove programs, and last fall the State Department and the U.N. Foundation launched a public-private partnership called the Global Alliance for Clean Cookstoves.

As the movement expands, there's been a divergence in philosophies about how to get the job done. Aprovecho comes out of an older school of thought that sees stoves as a means to create local industries: If you teach people how to make the stoves, goes this thinking, you can clean the air and create jobs.

But others say it's time to shift gears. 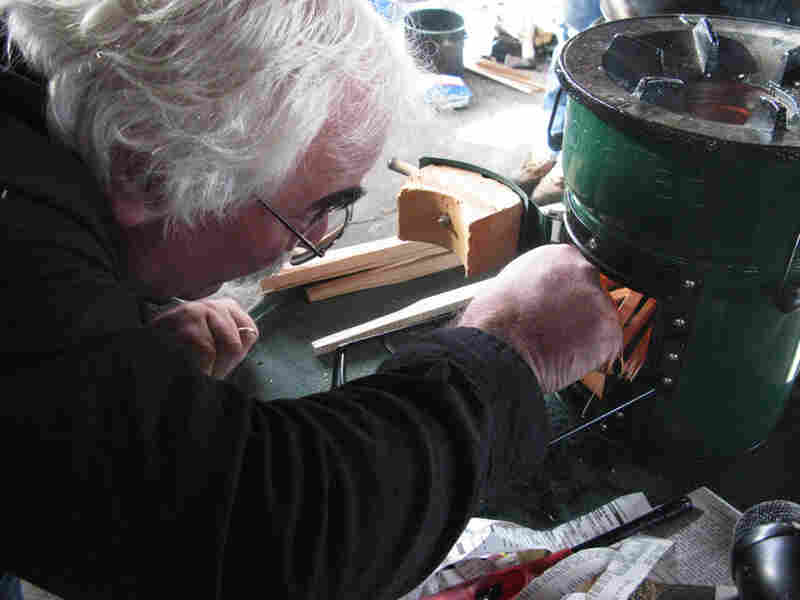 Aprovecho executive director Dean Still lights a "rocket stove." Once the fire is going, it takes only two or three sticks at a time to keep a pot of water boiling. Martin Kaste/NPR hide caption 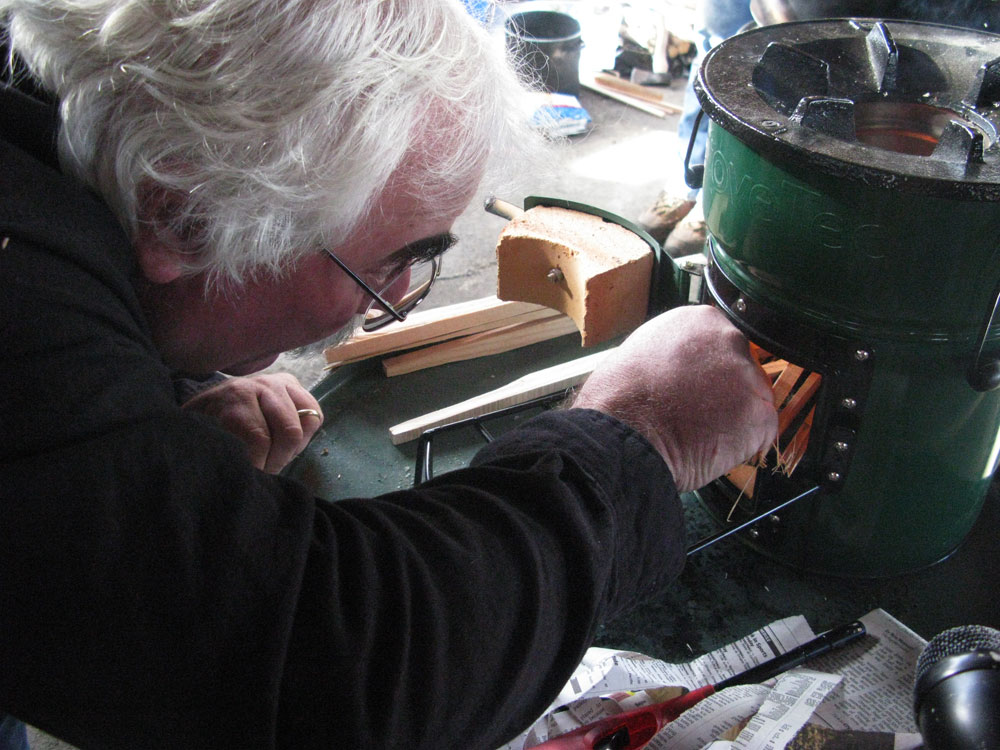 Aprovecho executive director Dean Still lights a "rocket stove." Once the fire is going, it takes only two or three sticks at a time to keep a pot of water boiling.

"There have been thousands of stoves programs; I'm familiar with hundreds of them," says Bryan Willson, a professor of mechanical engineering at Colorado State University. "And it's hard to identify programs that have been successful."

"There's a global need for 500 or 600 million cookstoves," he says. "And nobody is willing to write a big enough check to donate our way to that solution. So we really need to be able to develop products that people will want to buy."

He helped start a company called Envirofit, which mass-produces slick-looking rocket stoves in China for export to places such as rural India.

Aprovecho doesn't oppose this approach; in fact, it has its own spinoff company, StoveTec, which also makes consumer versions of the rocket stove in China. But Aprovecho keeps its distance from the business side of things.

Executive director Dean Still says he has qualms about identifying himself with a particular brand or model of stove.

"It's the opposite of what we really believe in," he says.

Still wants Aprovecho's designs and testing methods to be like open source software, meant to be shared and improved by anybody who takes an interest. He's not even comfortable with the idea of entering a stove-design competition, such as the forthcoming clean-stove challenge organized by the X Prize Foundation.

"People think it's a great idea to have a prize, but it just makes you selfish," he says. "You're not as likely to share information if you think you can win a million dollars by keeping it to yourself."

In the end, Still says, Aprovecho will enter a stove in the X Prize competition. But he says he and his colleagues don't need the incentive of a cash prize to keep doing what they've been doing since the 1980s: obsessively tweaking and redesigning their stoves to squeeze ever more energy, ever more cleanly, out of wood.