Accessibility links
Why Do Girls Love Horses, Unicorns And Dolphins? Many girls fantasize about horses, dolphins and unicorns. One theory about why is that it helps them express their power. Others say the animals — real and mythical — symbolize dreaming and achieving. Still for many, it's a way to run away with their imaginations. 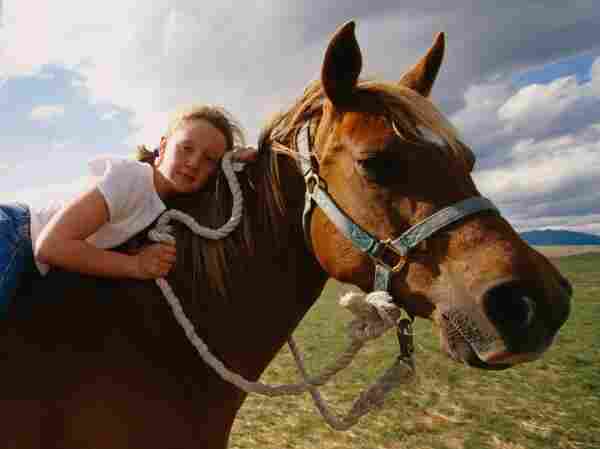 People have long speculated about why girls love horses, according to Peggy Orenstein, author of Cinderella Ate My Daughter: Dispatches from the Front Lines of the New Girlie-Girl Culture. She says that by identifying with these dynamic, strong animals, girls are expressing their own power. Corbis hide caption 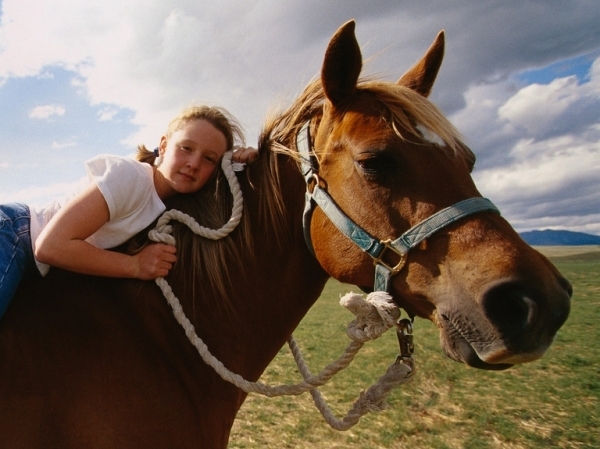 People have long speculated about why girls love horses, according to Peggy Orenstein, author of Cinderella Ate My Daughter: Dispatches from the Front Lines of the New Girlie-Girl Culture. She says that by identifying with these dynamic, strong animals, girls are expressing their own power.

People have long speculated about why girls love horses, according to Peggy Orenstein, author of Cinderella Ate My Daughter: Dispatches from the Front Lines of the New Girlie-Girl Culture.

By identifying with these dynamic, strong animals, Orenstein says, girls are expressing their own power.

"They're all active, they're all sources of power and motion and transformation," she says.

Laurel Braitman, an MIT graduate student in the history of science who writes about animals and what we think about them, says girls' fascination with these animals is more than power — the animals fuel girls' imaginations.

"Horses and dolphins and unicorns — these are all borderland creatures; gateway animals to other worlds," she says. "They help us imagine wonderful other ways of being in the world. They let us be cowgirls and oceanographers and mermaids and princesses."

Horsepower 'That Has A Heart'

When longtime horsewoman Dominique Gioia Scaggs approaches her horse's stall at the Santa Rosa Equestrian Center each morning, a grin still breaks out on her face. She says she's always excited to see B.J. — it's one of the big relationships in her life.

"To be in control, or out of control, on a galloping horse is a wild feeling," she says. "You are one with it. You just feel the power underneath you. And that's part of the attraction."

Danielle Altizio, 11, pours feed into a bucket for her horse, Grendal, whom she also boards at Santa Rosa. She spends every minute she can with him.

To be in control, or out of control, on a galloping horse is a wild feeling. You are one with it. You just feel the power underneath you. And that's part of the attraction.

When champion barrel racer Caterina Tadlock started at Southern Oregon Community College, one of her writing teachers asked what it was with girls and horses.

"His theory was that it was similar to taming a bad boy," Tadlock says. "I really disagree with that."

Tadlock wrote a paper for the class, "The Mystery of Girls and Horses," which she also posted on her sister's website, The Ultimate Horse Site. In it, she talks about how the image of the horse has changed. She says that in the past, mostly men rode and broke in horses. Women didn't have as many opportunities to form relationships with the animals as they do now.

"Horses used to be considered tools for cowboys, a means of transportation for soldiers, and a matter of business for racehorse owners," she writes. "Today, horses are mostly companion animals kept for pleasure rather than work or business purposes."

Girls are attracted to achieving the skills and level of competence it takes to care for a horse — the currying, the cleaning of the hooves, the mucking of stalls, the brushing of the mane and tail, the feeding of the horse — as well as to the nurturing aspects of the work.

Chelsea Berman, 21, works at the Monterey Bay Horsemanship Center, where she began volunteering when she was 13. Her love of horses is only rivaled by her love of dolphins. She says they "capture your heart."

Georgetown University professor Janet Mann, who has been studying bottlenose dolphins for 23 years, says girls' attraction to dolphins is paralleled with the mermaid fantasy.

"You can just live in the ocean and not have to have anything," she says.

Mann says she has received hundreds of letters from girls who are obsessed with dolphins. Sometimes the girls' mothers write for them.

"Hi Janet. My second-grade daughter Emily is crazy about dolphins. She has to do a small project at school. While her classmates are choosing the likes of Thomas Edison and George Washington, she wants to do Janet Mann, dolphin researcher."

"Sometimes they say they want to be me," she says. "I think it's like what I went through as a girl when I first wrote to Jane Goodall — I just wanted to do what she did."

Unicorns: The Dreamland Of The Horse

Posters of unicorns paper 11-year-old Jennifer Green's bedroom walls. For her, unicorns are magical. They symbolize dreaming and achieving.

"I know that unless you believe in them, they won't show themselves to you," she says. "They're like a very pure spirit."

Girls and unicorns have been linked in stories, art and on tapestries since at least the Middle Ages. One of the iconic myths about girls and unicorns has to do with the unicorn hunt, writes Nina Shen Rastogi in her article for Slate magazine, "Why Do Girls Love Unicorns? It's More Than Just The Horn." In this myth, she says, the only way that a hunter can lure the unicorn is to bring out a pure young virgin and have her sit in the woods. The unicorn is attracted by the maiden's innate goodness, purity, beauty and youth. 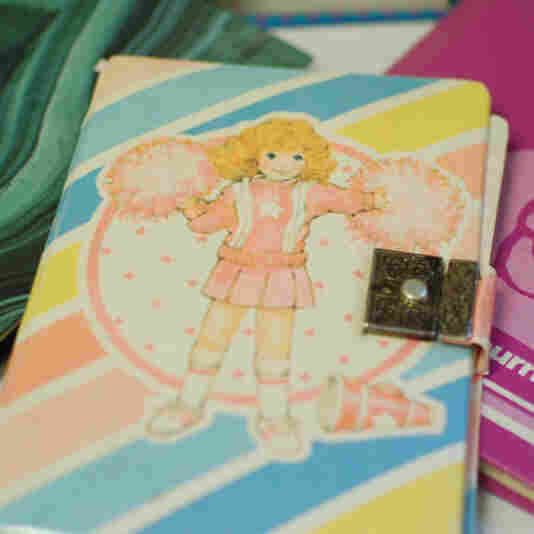 Series: The Hidden World Of Girls

"I think for many young girls, there's a fantasy that someday you will be recognized as the secretly beautiful, magical thing that you are," Rastogi says. "The unicorn will be attracted to something ineffable about you, secret from the rest of the world."

When you're small, you're more imaginative and open to possibilities, says graduate student Braitman.

"That's maybe the most beautiful part of girlhood," she says. "Knowing that you can't actually be all these things — but not being entirely sure."

A previous Web version of this story listed champion barrel racer Caterina Tadlock as going to Oregon State University. She actually went to Southern Oregon Community College. Also, it was one of her writing teachers — not her freshman English teacher — who asked what it was with girls and horses.