Accessibility links
The End Of Trends: If It's Hot, It's Over The Trend — its spotting, its tracking, its examination — has become omnipresent in contemporary culture. And if there is one thing that watching trends has taught us, it's that at precisely the point at which something becomes ubiquitous, that something is no longer a trend.

The End Of Trends: If It's Hot, It's Over

The End Of Trends: If It's Hot, It's Over 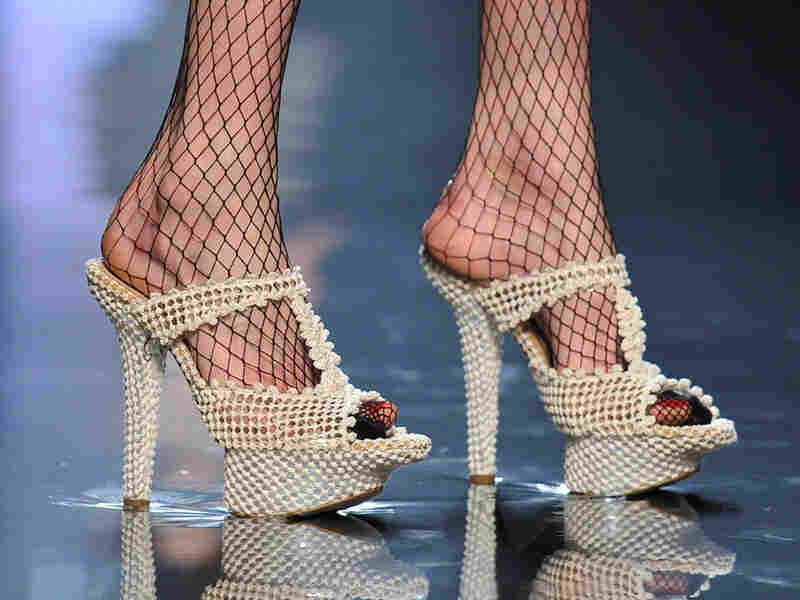 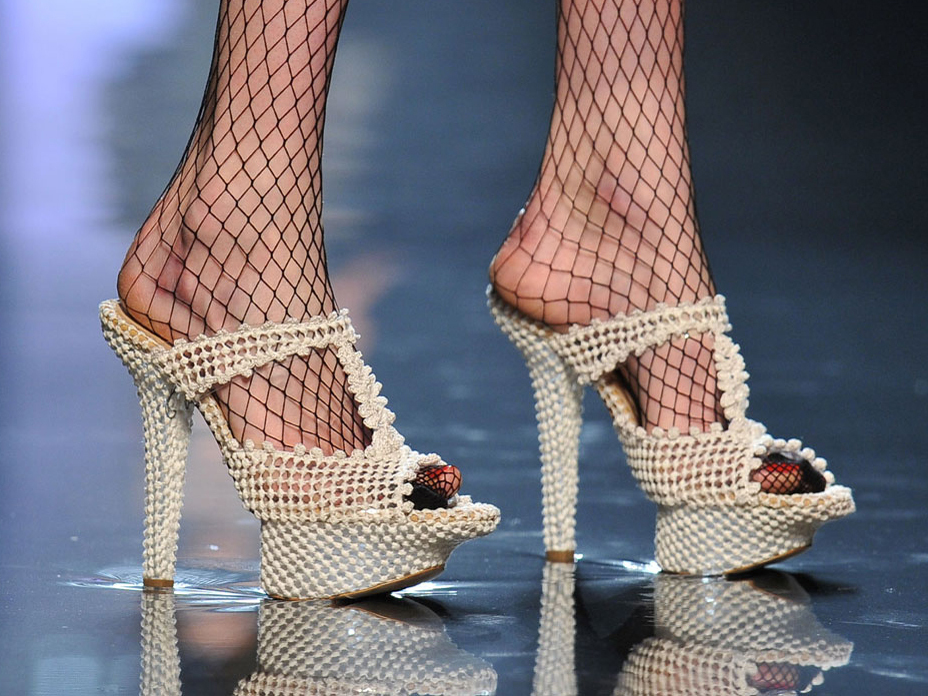 Spotted On The Runway: Let's hope these puppies from Jean-Paul Gaultier's Jan. 26 show in Paris don't catch on.

Everywhere you turn, people are talking about trends. On a CNN news show, a Chyron runs in the corner of the screen pointing out stories that are "trending now." The home pages of Yahoo and AOL also feature Trending Now sections. Google Trends pays scary attention to popular searches

The White House tends toward trends. "Last month, our economy added more than 100,000 private sector jobs and the unemployment rate fell sharply," President Obama said in January. "The trend is clear." And the White House website is tricked out with trendy phrases, such as "jobs trends," "employment trends," "the trend on earmarks" and "a troubling trend in food safety."

The Trend — its spotting, its tracking, its examination — has become omnipresent in contemporary culture. And if there is one thing that watching trends has taught us, it's that at precisely the point at which something becomes ubiquitous, that something is no longer a trend.

First, a definition: A trend is a prevailing tendency that is gradually gaining momentum and might have long-term implications. It's different from a fad, which is a short-term burst of interest or way of being.

The fact that more people are working from home is a trend. That many of them wear Snuggies all day long is a fad. So many of the "trending now" items on the search engines' lists are really fads, not trends.

Trends exist "because they satisfy some very basic needs in all of us: the need for communicating social identity and the collective need for making sense of the world," says Maria Mackinney-Valentin, a fashion and trend scholar at the Danish Design School in Copenhagen. 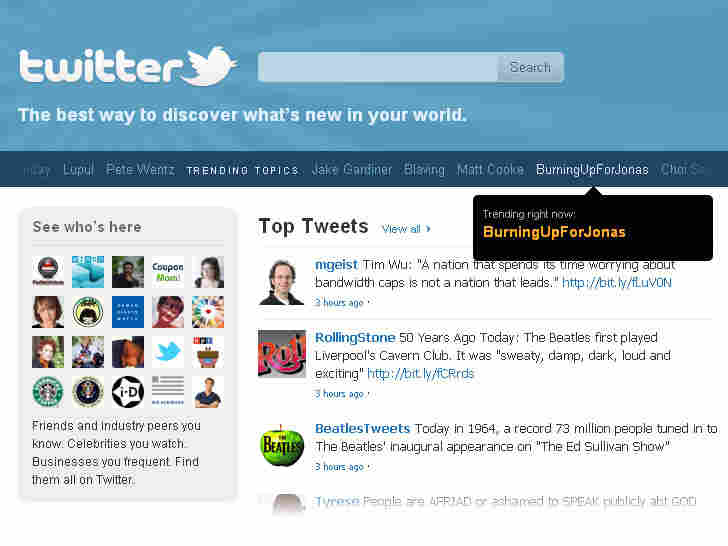 He points to several financial trends, for instance.

"If you could have anticipated the real estate bubble," he asks, "would you have avoided buying into it? If you had read in 2007 that there would be a 'Panic of '08,' would you have left your money in the stock market and 401(k)? If you were an entrepreneur, and were told that bottled water, gourmet coffee and organic foods would be megatrends before they were, would you have considered them as profit opportunities?"

We have always had trends — in fashion and politics, in food and travel, in nearly all human pursuits. Traditionally, though, identifying those trends or movements was predominately the purview of historians. With the benefit of hindsight, pinpointing romanticism in music or neoclassicism in art is easy. In the 17th century, most of the so-called metaphysical poets were not even aware of each other.

The Internet has so fractured us globally that we no longer are looking for mass-culture experiences. ... Marketing companies can no longer take advantage of trends. So maybe the last trend we will see is a trend toward a Trendless World -– full of surprise and originality.

Eventually, culture watchers and sociologists began pointing out contemporaneous waves of behavior. In his 1962 book Diffusion of Innovations, sociology professor Everett Rodgers dissected the trajectory of trends and innovations — speaking of early adopters and laggards. By the end of the 20th century, trend spotting and trendsetting were marketable skills.

Between 1960 and 2000, the appearance of the word "trendsetter" increased in books nearly 500 percent, according to Google. In 1997, The New Yorker did a profile of trendsetters. The PBS documentary show Frontline aired The Merchants of Cool, which looked at how marketing wizards created trends in young people.

All of a sudden, trends and trend trackers were everywhere. The New York Times took note in a 2006 story. "Trends are the new trend," Reinier Evers, founder of the Dutch company TrendWatching, told The Times. Evers made his mark in the trend-spotting world for naming widespread movements such as "Tryvertising," "Life Caching" and "Youniversal Branding."

How Adoption Speed Affects the Abandonment of Cultural Tastes, a 2009 study conducted by marketing professor Jonah Berger of the University of Pennsylvania's Wharton School of Business and others, and published in the Proceedings of the National Academy of Sciences, suggests that "cultural tastes that have been adopted quickly die faster."

People look at trends with a jaundiced eye, the report states, so they "avoid identity-relevant items with sharply increasing popularity because they believe that they will be short lived."

Has anything in our culture risen more swiftly than trend spotting?

The fashion industry is often the first to recognize trends. And it may have been among the first to forecast their end.

In the spring of 2010, Simon Doonan — creative director at Barneys upscale department stores — wrote in the Style pages of The New York Observer that he was not seeing any trends in human wear anymore. "In the old days, style used to be the prerogatives of a small group of people. Now it is a national sport. Ticket sales are exploding. People are pouring into the arena in such vast numbers that none of us can keep track of the rule book. Et voila! Nobody is keeping score. All bets are off. Anything goes."

Doonan's observation, that for decades trends have been set by a few at the top of the pecking order, may explain why there are fewer and fewer trends. Cable television and the Internet have splintered the mass audience that trend establishers and marketers once lorded over.

Today fashion, music, art, literature, politics, economics and just about everything else are going through social upheaval.

The Internet has so fractured us globally that we no longer are looking for mass-culture experiences. So major trends have become splintered mini-trends — which are not really trends at all. Trends only work when there is a growing audience that buys into them. And trends can only reach critical mass if the masses are not too critical.

And with the decline in trends comes a decline in the notion of there being such a thing as pop culture. Marketing companies can no longer take advantage of trends. So maybe the last trend we will see is a trend toward a Trendless World — full of surprise and originality.

The problem might be in the word itself. "I think there are trends in terminology just as there are in everything else," says Mackinney-Valentin. "So the term 'trend' may be going out of fashion, but that does not mean that they are not still here."

The trend of trends is changing, says Berger of the Wharton School. The wealth of data, analysis and commentary now available "means that trends have become a much more studied and talked-about topic, and this itself may affect their life cycles."

When something becomes ubiquitous, it is no longer a trend, Berger says. "But it is also the case," he says, "that merely calling something a trend or noting its trendiness may also decrease its allure or hasten its decline."

Open Questions: In Search Of Something That Is Culturally Ubiquitous Jan. 24, 2011