Accessibility links
A Birth-Defect Breakthrough: Prenatal Spinal Surgery Doctors treating spina bifida report that surgery in utero reduces the paralysis and brain damage that often results when the defect isn't corrected until after birth. And children who had the prenatal operation were twice as likely to walk unaided later.

It's a landmark in the controversial, 30-year-old field of fetal surgery: Surgeons are reporting success in treating a common, serious birth defect called spina bifida — before birth. 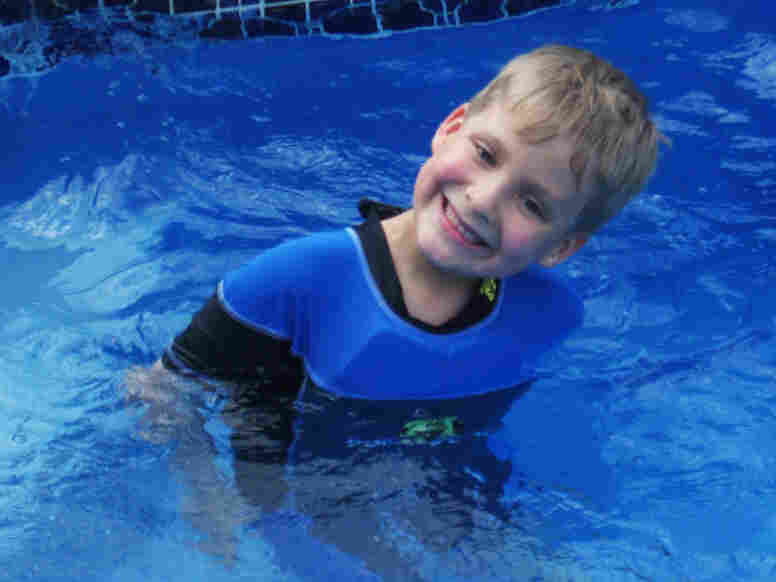 Brett Hallman had a surgery — as a 25-week fetus — to treat his spina bifida. Now, he's an active first grader who enjoys swimming and other sports. Courtesy of Tara and Jake Hallman hide caption 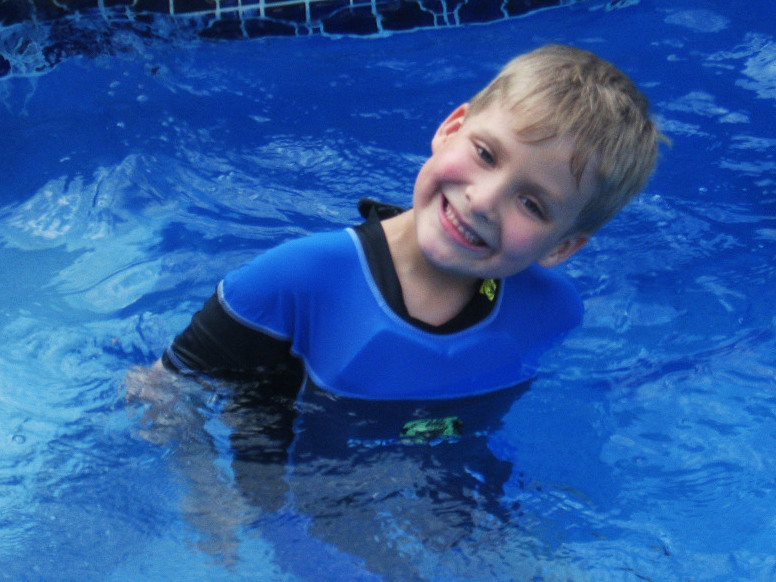 Brett Hallman had a surgery — as a 25-week fetus — to treat his spina bifida. Now, he's an active first grader who enjoys swimming and other sports.

Courtesy of Tara and Jake Hallman

Spina bifida is a hole in the spine that sometimes allows a loop of the naked spinal cord to protrude outside the body. Such neural-tube defects are down 30 percent because more expectant mothers are taking folic acid pills and dietary supplements. But about 1,500 babies are born with spina bifida every year, and many are destined to have severe lifelong disabilities.

A new study, published online in the New England Journal of Medicine, shows that repairing the most severe form of spina bifida during pregnancy can reduce the paralysis and brain damage that often result when the defect isn't corrected until after birth.

The surgery is delicate and risky for both mother and fetus. Doctors must make a three-inch incision in the mother's uterus to expose the fetus, which is typically about four inches long at this stage. They then put the exposed piece of spinal cord — between the size of a raisin and an almond — back where it belongs, and suture layers of tissue to keep it in place and prevent cerebrospinal fluid from leaking out.

This is the first time that fetal surgery has ever been attempted and validated for what we think of as a non-fatal birth defect.

Diana Farmer, chief of pediatric surgery at the University of California at San Francisco

Brett Hallman is in the lucky group. When he was a 25-week fetus, he was the 55th patient who had fetal surgery for severe spina bifida at Children's Hospital of Philadelphia.

Brett's mother, Tara Hallman, says she and her husband Jake knew the operation was a success months later, when Brett smiled, sat up and crawled on schedule.

"When he walked at 17 months without any braces — without anything — it just took my breath away," Brett's mom says.

But doctors who treat spina bifida say there's something even more important: Fetal surgery reduces a child's need for a lifelong shunt — a tube to carry cerebrospinal fluid from the brain to the abdomen. Without the shunt, fluid can build up, causing devastating brain damage or death.

More than 80 percent of the children who had the surgery after birth needed shunts, compared to 40 percent among those operated on prenatally. 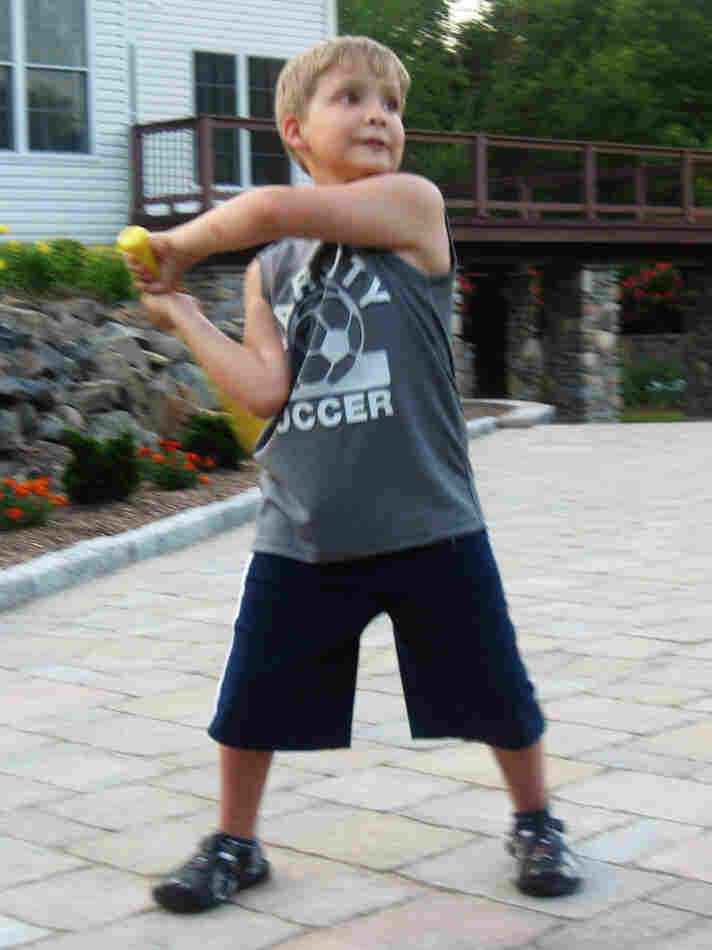 Brett Hallman's mom says he has to work harder to keep up physically. But he hasn't let his condition get him down. Courtesy of Tara and Jake Hallman hide caption 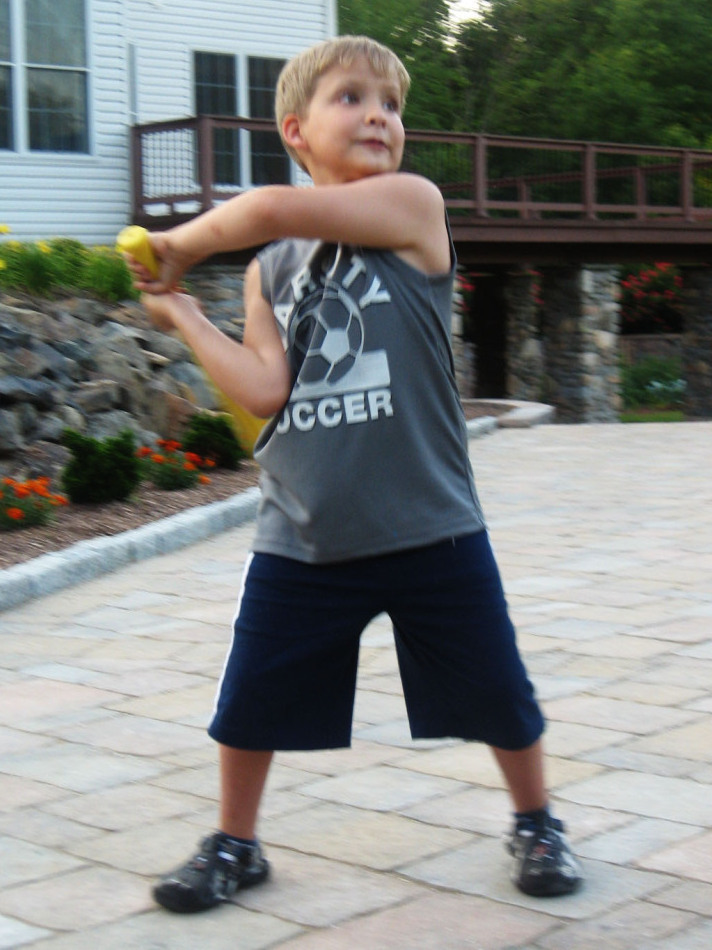 Brett Hallman's mom says he has to work harder to keep up physically. But he hasn't let his condition get him down.

Courtesy of Tara and Jake Hallman

"From a medical point of view — even though walking is quite nice — for the long-term overall outlook for these children, being free of a shunt is probably the single most important aspect," says Diana Farmer, a study coauthor and chief of pediatric surgery at the University of California at San Francisco.

Farmer says the new study is a landmark for the field.

"This is the first time that fetal surgery has ever been attempted and validated for what we think of as a non-fatal birth defect," Farmer says.

Since surgeons at UCSF first did fetal surgery three decades ago, the field has been controversial. "People thought it was quite a heretical thing to do, and quite risky for women," farmer says. "Prior to this, we only considered fetal surgery in a circumstance where either the fetus would not survive pregnancy or the baby would be likely to die soon after birth."

But she thinks the tide is beginning to turn — partly because other procedures, such as donation of part of a liver from a living relative, "have demonstrated that it is ethically reasonable in certain circumstances for someone to undergo a medical procedure for altruism, essentially — to help someone else."

But Scott Adzick of The Children's Hospital of Philadelphia, lead author of the new study, stresses that fetal surgery for spina bifida "is not a cure. We think that we can help kids."

Stitch In Time: Fixing A Heart Defect Before Birth

One of the biggest risks is to the moms. Surgery weakens the uterus, which could cause a disastrous uterine rupture if the woman goes into labor, though this didn't happen during the study. The uterine incision also means that all subsequent babies will have to be born by caesarean section.

And as Tara Hallman testifies, even the most successful outcomes of fetal surgery aren't perfect. Although Brett is now an active 7-year-old who swims and plays other sports, he has to work to keep up physically.

And he has some bladder and bowel problems — but nothing, his mother says, that can't be managed. For instance, Brett can't urinate normally, so he's learned to insert a catheter every few hours.

Tara Hallman says he hasn't let his condition get him down. "Everybody has their challenges in life, and everybody has their battle scars, as we call them," she says. "This is his. And it's something that he's actually very proud of. He loves to show people his scar. It's actually part of his identity."