Accessibility links
As 'Hide/Seek' Ends, A Step Back To Look For Lessons The controversial Smithsonian exhibition Hide/Seek has sparked national debate — not for what's in it, mostly, but for what's been taken out. As the exhibit comes to a close, its curators look back and examine its role in the history of American culture wars. 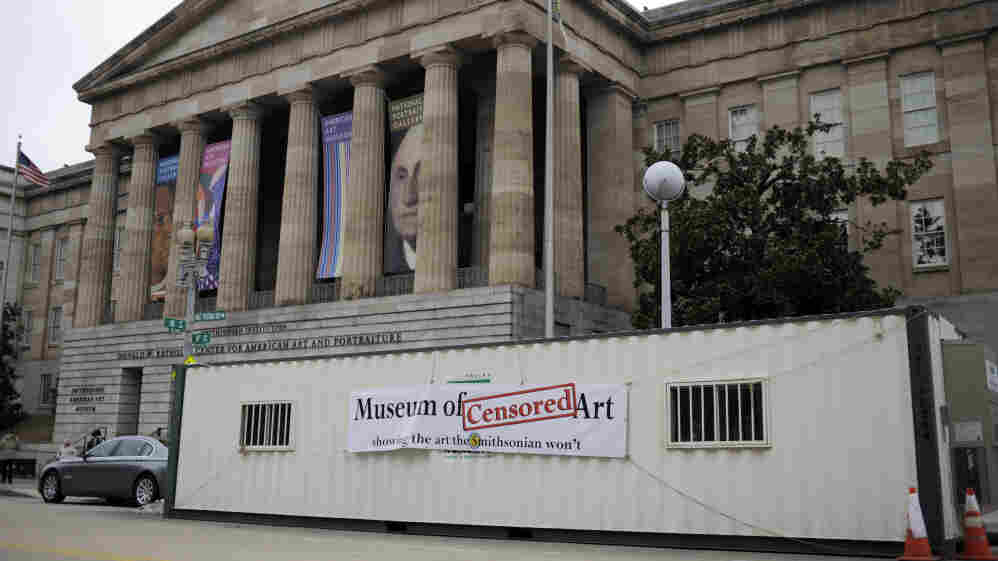 When the National Portrait Gallery removed a work after pressure from activists and politicians, a project called the Museum of Censored Art set up shop right outside the museum's doors. Erin Schwartz/NPR hide caption 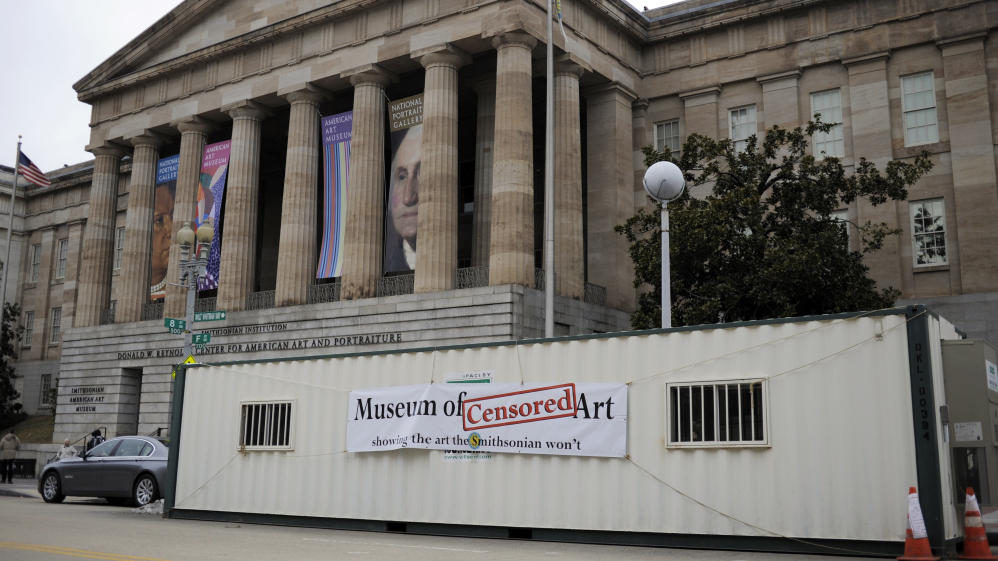 When the National Portrait Gallery removed a work after pressure from activists and politicians, a project called the Museum of Censored Art set up shop right outside the museum's doors.

The National Portrait Gallery exhibition Hide/Seek: Difference and Desire in American Portraiture has gotten a lot of attention. Not for what's in it, but for what's been taken out — a controversial work of video art that briefly shows a crucifix covered in ants during a stream of powerful, often nightmarish images.

When Hide/Seek opened last fall, co-curator David C. Ward — a historian and self-described bureaucrat who's worked for the Smithsonian for 30 years — described the show as mainstream. It's the first Smithsonian Institution show to focus on gay and lesbian contributions to American culture, and it's filled with masterpieces by major American artists. Andy Warhol, Annie Leibovitz, Thomas Eakins — "canonical figures," in Ward's words. The intention, he said, was hardly to provoke.

But it became political. Now, standing outside the show's entrance with a bit less than a week before the scheduled closing, Ward ruefully shakes his head.

"It's been interesting since last we talked," he says.

'Now You Have To Clothe Your Homophobia'

The show had been open for a month, and hadn't received a single complaint. Then the conservative Catholic League got wind of Hide/Seek and urged supporters to deluge the Smithsonian and members of Congress with grievances. Republican politicians including John Boehner and Eric Cantor — now the Speaker of the House and the Majority Leader — advocated canceling the exhibition, though it's unclear if they actually saw it.

Scholar Jonathan Katz, who co-curated the show, believes it's telling that much of the criticism of Hide/Seek was couched as an objection to what some argued was anti-Catholic bias.

"It's no longer the same game that it was 15, 20 years ago, where you simply had to point out the homo and yell, 'Kill it,' and the mob attacked," Katz says. "Now you have to clothe your homophobia in something else."

"It's the same, structurally, since the '90s," says Jeff Weinstein, who helped cover the art controversies of the '80s and '90s for the Village Voice. What's different this time, he says, is how the Internet helped the controversy flare up fast.

More on the Exhibit:

Express Yourself: A Major New Showcase Of Gay Portraiture

The response of the head of the Smithsonian was to pull the video. That was the wrong move, according an internal review conducted by the Smithsonian's board of regents.

"Once an exhibition is opened, absent actual error, things should not be removed without a significant consultation process," said regent Patty Stonesifer during a press conference last week.

Still, attendance at the Portrait Gallery shot up more than 75 percent from this time last year. And David Wojnarowicz, who died almost 20 years ago, is now a free-speech cause celebre.

Wojnarowicz is the artist whose video — "Fire In My Belly," created at the first height of the AIDS crisis in the U.S. — was pulled from Hide/Seek. Since the controversy erupted, "Fire In My Belly" has been viewed online more than a million times. It's been screened in solidarity by galleries nationwide, and was recently purchased by the Musuem of Modern Art.

Elsewhere On The Web

From The Awl (includes video):

My Catholic Republican Mother Watches 'Fire in My Belly'

One of the places it's been drawing attention is in a nondescript trailer, parked right outside the Portrait Gallery, called the Museum of Censored Art. "Fire In My Belly" plays there on a continuous loop, and organizers say 5,000 people have seen it there so far.

"It is very provocative," remarked Derek Smith, a lawyer who wandered in during lunch one recent weekday. He stood in his winter coat, absorbing the video's surreal images — the crucifix, coins falling into a bowl of blood, red string stitching a mouth shut.

"I'm glad that I'm seeing it, and I would be disturbed if I was denied the ability to see something like this," Smith said. "I definitely would consider it art, without a doubt."

As for Wojnarowicz, journalist Jeff Weinstein, who knew him, isn't sure what he'd make of the controversy today.

"He would be so thrilled that people weren't dying, gay men weren't dying all over right and left, all over dropping," Weinstein says. "I don't know what he would make of it, because the world is a different place."