Accessibility links
Fighting For Water In Arid Imperial Valley Southern California's Imperial Valley produces about 80 percent of the nation's winter vegetables. But years of drought, and a population boom in the Southwest, now threaten the water supply in the desert region — and all those cheap winter greens. 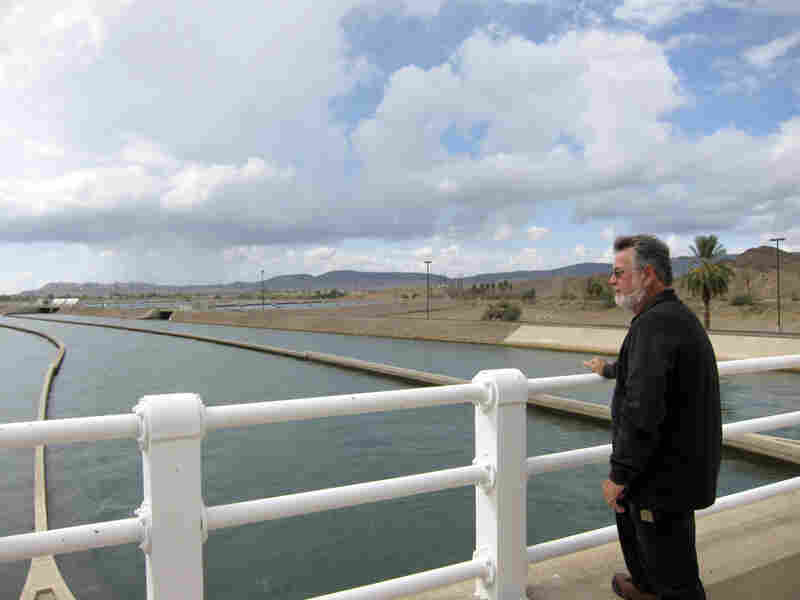 Doug Cox looks out on the Colorado River from Imperial Dam, which he manages. Through the 1930s dam, about a fifth of the Colorado River's water goes to irrigate about 1,200 square miles of farmland. Krissy Clark/KQED hide caption 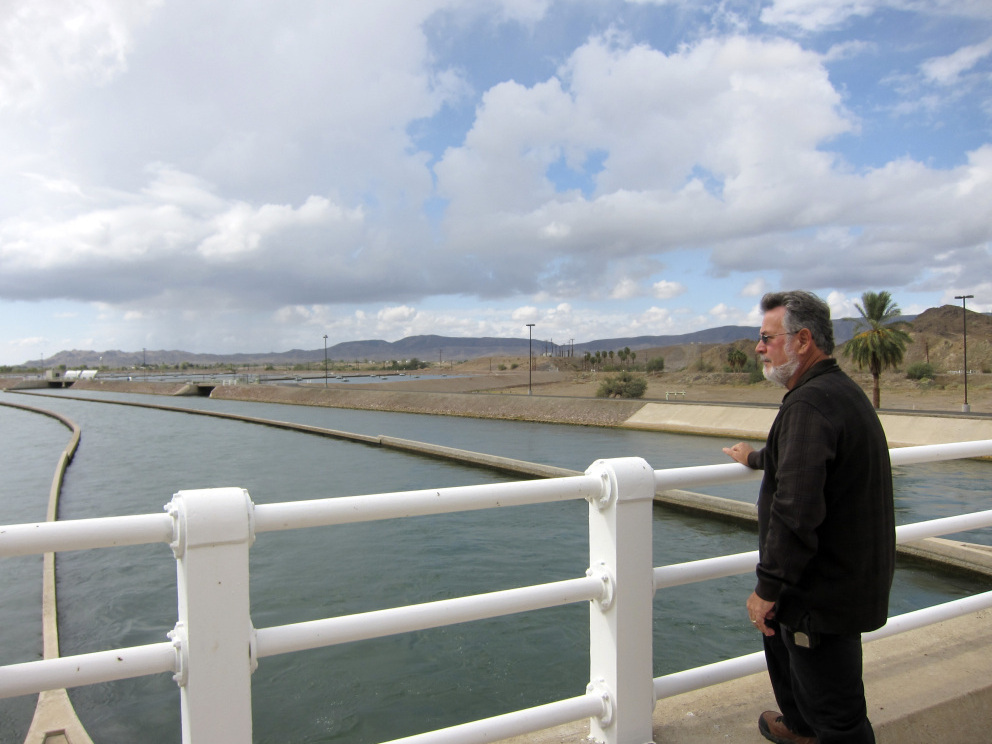 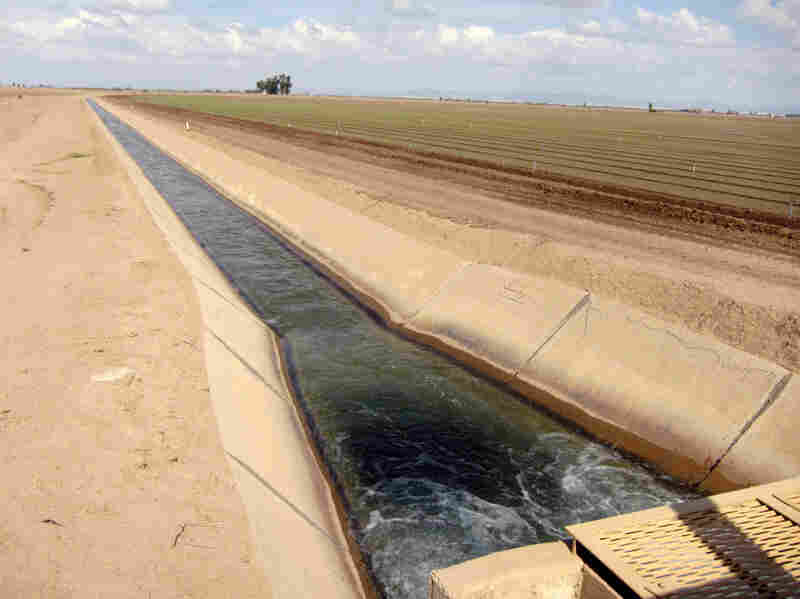 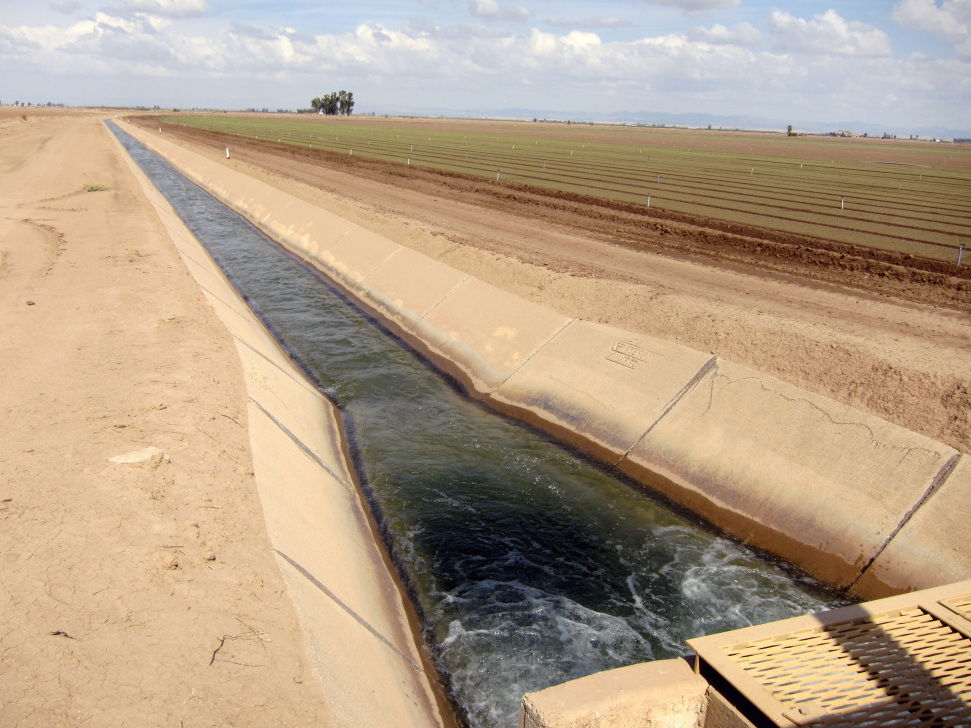 An irrigation channel brings Colorado River water from the All American Canal to a newly planted lettuce field. 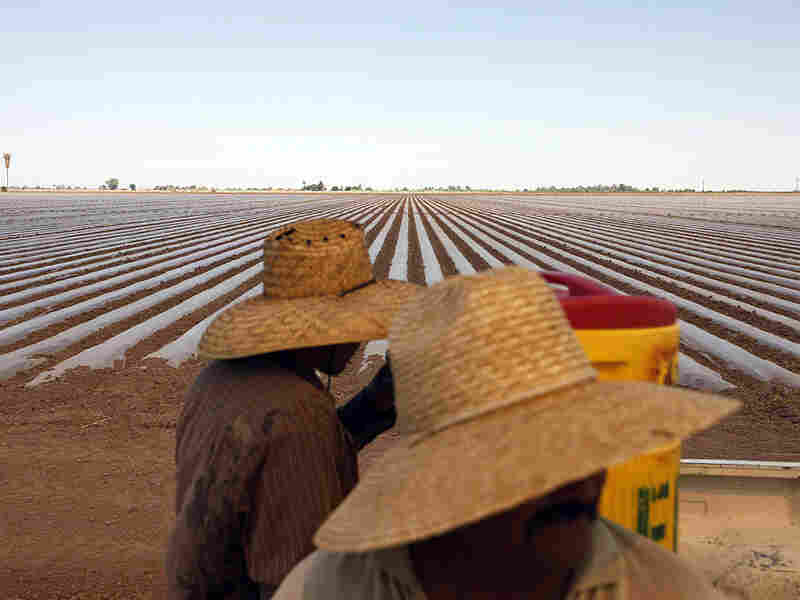 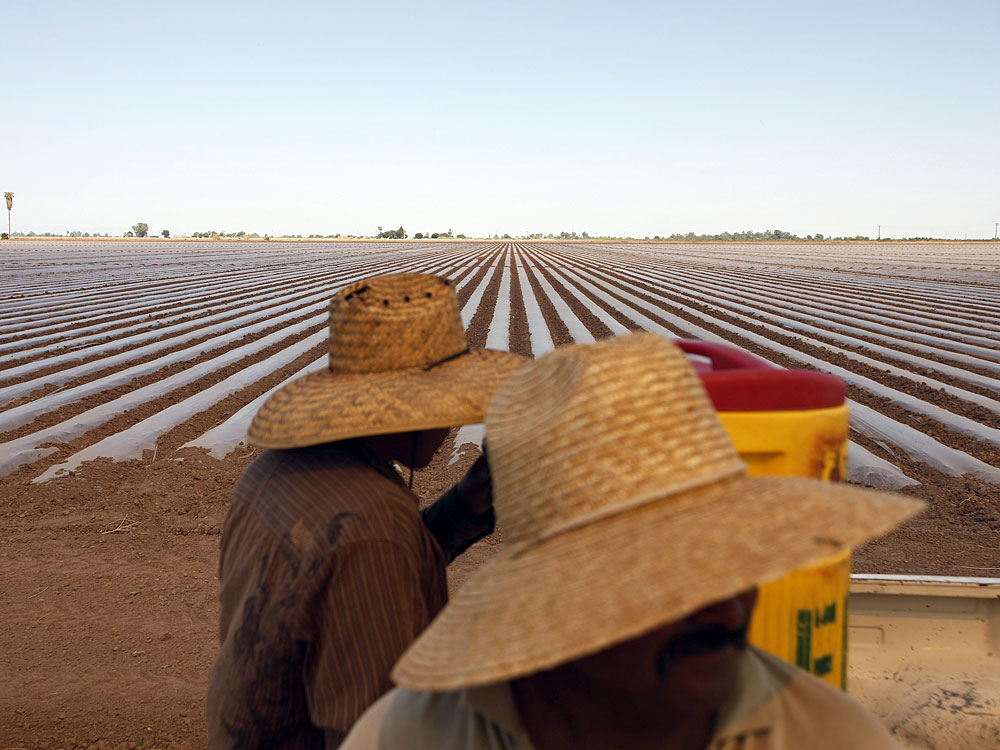 Southern California's Imperial Valley produces about 80 percent of the nation's winter vegetables. But years of drought, and a population boom in the Southwest, now threaten the water supply in the desert region — and all those cheap winter greens.

The next time you eat a salad this winter, picture the valley Vince Brooke is driving through: a beige desert set against glittering fields of green. Brooke works for the local irrigation district and gives tours to busloads of water wonks from various Southwest cities through this valley — down the bumpy roads, past cropland and canals.

"You know, you can tell when they just are not — how can I say this diplomatically?" Brooke says. They're just not on board, he says, with the way agriculture uses water down here.

In some eyes, "We're water wasters, we're water hogs, the Ag sponge, a waste of water," he says.

The water they're talking about is the Colorado River — the lifeblood of a billion-dollar agricultural industry in the Imperial Valley. The system works, thanks to the giant cement Imperial Dam.

Doug Cox manages the dam for the Imperial Irrigation District.

"This is the only source of water for the Imperial Valley," Cox says. "All the drinking water, all the agricultural water — this is it."

Imperial Dam shunts water from the Colorado River 82 miles through a canal, across the desert to Imperial Valley Farms. Back in the 1930s, when the project was completed, it was considered one of the engineering wonders of the world.

In a newsreel from those days, a narrator describes "the Imperial Valley, once dry and barren, with the help of water from the Colorado yields rich crops when irrigated."

There was just one problem. When Imperial Dam was built, the region was in the midst of the wettest period of the past millennium, and the Colorado River was mighty.

But 11 years of drought — and more thirsty Southwest sprawl than the newsreel narrator could've dreamed — mean trouble for Imperial farmers. Soon, there may not be enough water to go around and still make the desert bloom.

That could bring an end to the area's days of growing sweet corn, onions, lettuce, carrots, cauliflower and broccoli.

Ralph Strahm, a third-generation farmer, hopes his generation won't be the last. The Strahms came here right around the time Western states were divvying up water from the Colorado River.

The strategy was pretty much "first come, first served." And Imperial Valley farmers got served a torrent — priority rights to almost a fifth of the entire river. That represented more water than Arizona and Nevada received combined.

That was almost a century ago, but Strahm says there is still a good reason so much water should go to farms like his.

"The rest of the nation is becoming a service economy, and the Imperial Valley is producing something," Strahm says. "So many of our jobs in the manufacturing industries have been exported away from the United States. We're keeping those jobs here."

But the farmers aren't keeping all the water here anymore. Under pressure from federal officials, farmers have reluctantly sold some of it — to the more populous and powerful cities of Los Angeles and San Diego.

Standing near an irrigation channel, Strahm points to a controversial result of that transfer of water: a big padlock that secures a gate across the channel's mouth.

"That lock is to prevent water from being put on this field for the term of a fallowing contract," Strahm says.

Over each of the next several years, farmers are fallowing a chunk of land about the size of 10 Central Parks. Cities pay thousands of dollars for each unfarmed acre, and it can actually be a good deal for farmers when crop prices are low.

But diverting that water strains the valley's larger agriculture economy — the tractor salesmen, the fertilizer companies. And in the future, even more fallowing may be needed.

Lake Mead — the reservoir that holds Colorado River water for the Imperial Valley and most of the Southwest — has a 50 percent chance of drying up in as few as 10 years, according to climate researchers. That's assuming the region's water use doesn't undergo fundamental change.

But, says retired farmer John Pierre Menville, "There's only so much blood you can get from a turnip."

Menville is on the board of the Imperial Irrigation District. He says the farmers should not be the only ones asked to change.

"We want to be good stewards to the land, and good neighbors with our urban partners, but they want to put restrictions on us and how we grow our crops and the amount of water we use here," he says. "Why isn't someone putting restrictions on growth on the coastal plain, and their development?"

It's a choice between growing urban populations and growing cheap winter vegetables. And it's one people across the nation make, each time they buy spring greens in February.