Accessibility links
In China, Dad Uses Social Media To Track Down Missing Boy For three years, the father crisscrossed China searching for the son who had been abducted at age 3. Then he turned to the Internet and, with help from China's version of Twitter and a microblogging journalist, finally brought the boy home. 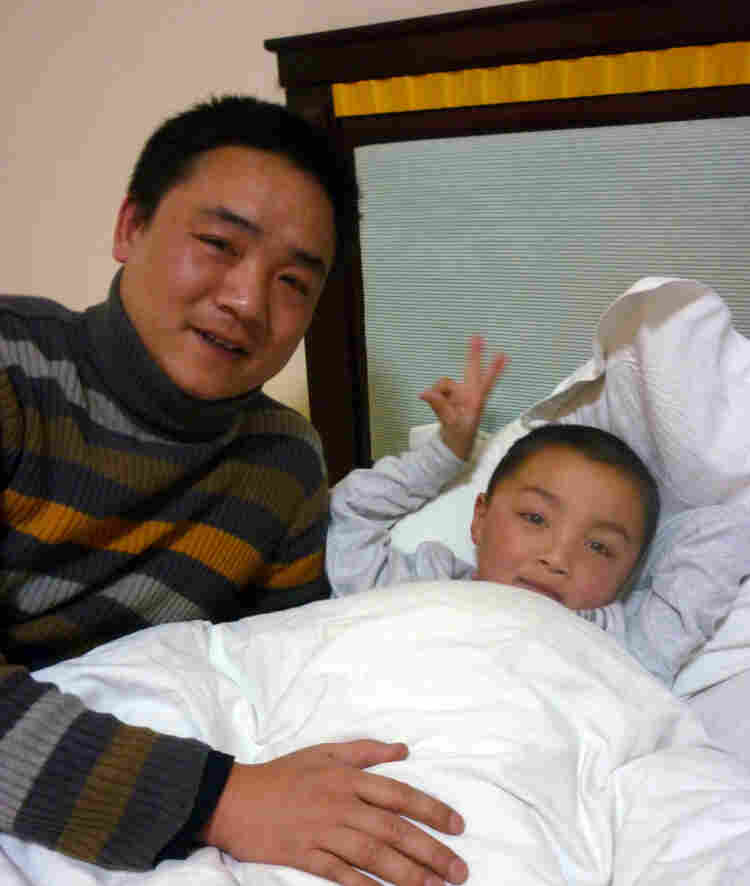 Peng Gaofeng used social media to track down his son, Xinle, who was abducted three years ago outside his home. Louisa Lim/NPR hide caption 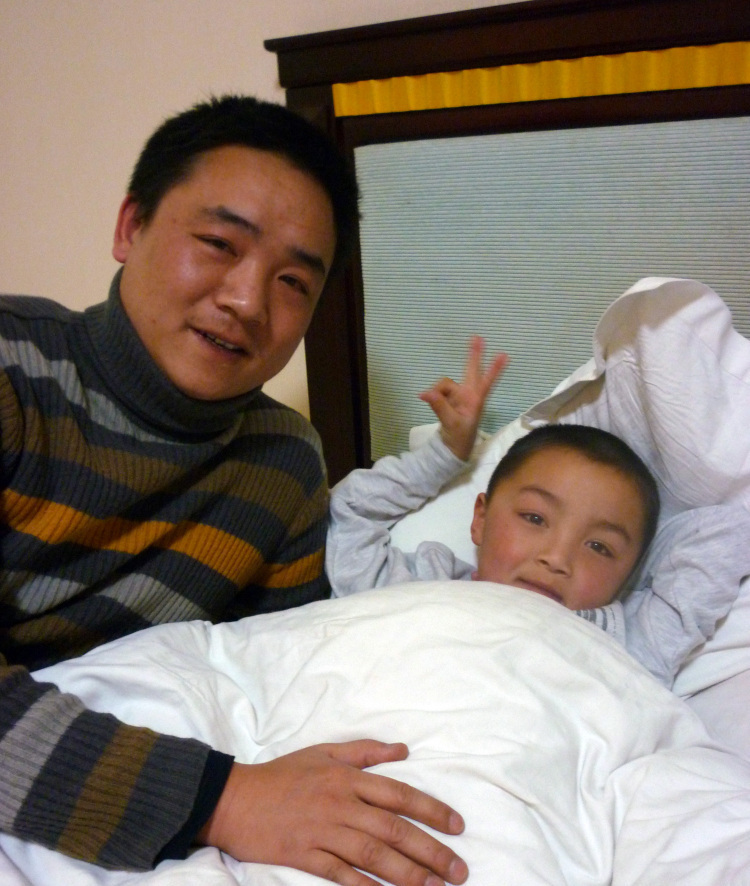 Peng Gaofeng used social media to track down his son, Xinle, who was abducted three years ago outside his home.

Three years after being abducted, a 6-year-old boy is finally returning home Thursday. He was rescued by the power of social media — in particular the Chinese version of Twitter.

For three years, the boy's father, Peng Gaofeng, crisscrossed China searching for him. At age 3, little Xinle was abducted outside their home in the southern Chinese city of Shenzhen. Peng was desperate and angry. He had even protested, with others, outside Beijing's Olympic stadium. The message: If China can manage to host the Olympics, why can't my child be found?

Then Peng turned to the Internet. He blogged and he flooded weibo — the Chinese equivalent of Twitter — with his son's photo. Journalist Deng Fei from Phoenix Weekly, who has 100,000 followers on weibo, helped in his search.

"At big festivals I kept tweeting his picture, since my followers would be going to their hometowns to celebrate, and I believed the kid had been sold to someone in the countryside," Deng says.

He was always confident the boy could be found. "The child is distinctive: His face is big, his teeth are pointed and his eyebrows are very far apart. If you saw him, you'd remember him," Deng says.

Then, at the start of the Chinese New Year holiday last week, an Internet user who had seen the boy's picture on weibo recognized him in Pizhou, a town in Jiangsu province. He got in touch with Peng, who contacted the police, and they traveled to the town.

Peng had had numerous false alarms in the past, including one time where he even posed as a buyer to free two other children, one boy and one girl. He had negotiated with the human traffickers to pay 30,000 yuan ($4,554) for the boy, and half that for the girl, then he turned the case over to the police. This time, after seeing a photo of the child, he was confident it was his own boy, but he was terrified.

"I'm scared," he told Deng, who was live-tweeting events. "What if it isn't him?"

The pair waited anxiously outside the police station, Peng shivering with nerves. Then a car arrived, a small confused boy was bundled out and someone shouted the boy's name. Peng burst into tears, and the child told a policeman, "That man crying is my dad."

Moments later, Peng was weeping uncontrollably on the phone to his wife. "I've seen him," he cried. "It's our son."

Speaking to NPR, Peng describes the moment he first held his son in his arms again: "I had no words. I just held him and cried. Three years of pain and pressure just exploded. I couldn't speak, I just held him."

Another Name, Another Family

Two days after their reunion, little Peng Xinle watches television in a hotel room, his father fussing over him, checking that he's not cold. The little boy is chirpy and excited, especially over a fancy new remote-control car. "It cost 13 dollars!" he boasts.

But it's clear little Peng Xinle has big adjustments ahead. Until just two days ago, he had even forgotten that was his name. For the past three years, he was called Han Longfei. He was living with the man who had abducted him, who treated him as his son. The man has since died from cancer, but his wife is still alive.

Peng says he will not pursue charges. "I'm just happy to have my son back. I'll leave it to the police. I don't want to sue," he says.

Xinle had been treated well during the three years, and had gotten good results at school. Sources say police also are considering the fact that the woman with whom Peng Xinle was living is also caring for another child and elderly relations, who have no other source of support.

Peng says if his boy wants to keep in contact with the family, then he will permit it. "If my son can't forget that family, then we won't. I might allow his foster mother to see him. They must have developed very deep feelings for each other over three years," he says.

He has no doubt about why his son was found: "This is because of the power of the Internet. If there was no Internet, I would never have found my son."

Peng says he'll keep tweeting about missing children. Among his happy tweets about the journey home to Shenzhen and his son's carsickness, he's still posting pictures of the missing child of a friend.

Nobody knows how big the problem of child trafficking is in China; estimates vary widely, with a State Department report estimating 20,000 children and women are abducted in China every year. A crackdown on trafficking launched in April 2009 resulted in the rescue of 6,785 children in 18 months, according to official statistics, and Chinese authorities have promised lenience to child traffickers who give themselves up by the end of March.

Just two weeks ago, a microblog account targeting China's child beggars was set up by Beijing professor and activist Yu Jianrong. It's an Internet sensation — the awakening of China's digital conscience, some say — with a quarter-million followers across two different accounts. Netizens tweet photos of child beggars, along with the time and place they were taken. So far, six abducted children have been identified by their parents.

Critics say the campaign against beggars is irresponsible because traffickers might retaliate against children whose pictures are online. Others worry that it will stigmatize beggars, who are vulnerable anyway. But the official reaction has been positive; Chinese police say they will try to verify every case posted. And police, too, have been using Twitter-like tools; the DNA test results confirming that Peng Gaofeng and his son are related were posted directly on Shenzhen police's microblog.

'The Era Of Microblogs'

China now has the world's largest population of Internet users, with 457 million. Twitter itself is banned, but the Chinese equivalents are popular — although comments on sensitive subjects can be censored. And journalist Deng Fei says the influence of the microblogs is immense.

"Before, we didn't have any means of reporting news. That was the job of the official media. Now we have a way; microblogs are our own individual media. They're a loudspeaker, to broadcast yourself. I think microblogs can change our country."

He says microblogs also are forcing government departments to be more open.

"I don't think the central government fears microblogs," he says. "I can see police at every level, and many government departments are starting microblogs. Our high-level officials are taking a very transparent approach to this."

Even the staid People's Daily announced, "The era of the microblogs is here." But old habits die hard; local journalists are nervous that the authorities will crack down to prevent reporting on the father-son reunion and the once-taboo subject of child abduction. Given the level of public interest, though — and given the growing importance of the Internet — maybe that doesn't matter quite so much anymore.