Accessibility links
Weekly Standard: Misguided Military Talk As the U.S. House prepares to tackle the budget and how to reduce government spending, Thomas Donnelly of The Weekly Standard argues that, despite what many like to think, defense spending is probably the most critical. 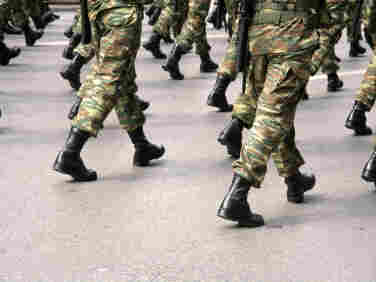 The House will start talks this week about how to reign in government spending. Many wonder how defense spending will factor in to the budget cuts. iStockphoto hide caption

Thomas Donnelly is director of the Center for Defense Studies at the American Enterprise Institute.

Stephanie Gutmann's National Review Online blog post perfectly encapsulates the frustration fiscal conservatives have toward their national security brethren. It similarly reflects the conundrum facing the House Republican leadership as it prepares for the murderous-yet-critical period, beginning next week, when it begins to try to operationalize its shrink-the-government mandate. Having to distinguish between government priorities is so much messier than just taking a chain saw to everything equally.

Gutmann, like the House leadership, does not profess to be "a line-by-line expert on the military budget," but that seems to reinforce her "common sense [that] says there's a nice layer of lard that can be pared before we hit muscle and bone." And, channeling the Carl-Icahn-like spirit of business-minded conservatives, she suspects "the services might even work better if forced to run a little leaner."

Well no one would deny that the Pentagon is indeed a large bureaucracy, and suffers from many defects that government bureaucracies are prone to. Yet there always turn out to be big problems in translating Gutmann's "common sense" into practical military policy, as the list of cuts she gathered from her "Facebook friends" in uniform indicates.

Among those recommendations was the hardy perennial — particularly attractive to isolationist libertarians — of withdrawing the "tens of thousands of troops stationed in Germany and the UK." Whatever the strategic wisdom of leaving the feckless Europeans to fend for themselves, the fact is that, as a budget matter, a redeployment of those forces to the United States would actually increase near-term costs; the military construction alone would run billions of dollars. But there's more to it than that: U.S. bases in Europe are not simply paid-off real estate investments, they're critical nodes for projecting power around the world. One of the responses to Gutmann's post eloquently captured one piquant manifestation of the value of this infrastructure: "Ever think about how many Americans would have died in the past eight years were it not for Landstuhl Army hospital [in Germany]?"

Like many others before her, Gutmann likes the budgetary look of the Few and Proud: "The Marines, the service that gets the least money per capita, is also considered to be the most effective." But even otherwise sympathetic respondents pointed out that this was "foolish" USMC propaganda: "Yes, the USMC has the lowest per-capita spending, but they have the least capital-intensive mission…." The Marines rely on other services — especially, such as in Iraq and Afghanistan, when they are employed on long-run missions ashore, the Army — for all sorts of support. The Marines also require pretty expensive gear: the just-terminated Expeditionary Fighting Vehicle, essentially a tank on jet skis; the V-22 "tilt-rotor" half-chopper, half-fixed-wing airplane; the vertical take-of version of the F-35 fighter, on two-year probation from Defense Secretary Robert Gates. "Then, of course," reminded another post-responder, "the USMC deploys from these little floaty things called 'ships.'" The Marines are exactly the kind of exceptional force that distinguishes the U.S. military from other militaries, but they don't come cheap.

In sum, the unpleasant truth is that the Pentagon, bureaucratic mastodon that it is, is profoundly unlike the Department of Education — there are mortal and immediate consequences for being wrong in war. Indeed, if the "education blob" did half as good a job of educating America's children as the "military-industrial complex" does at killing our enemies, "winning the future" would not be a contest. Conservatives, especially, ought to emphasize the need to properly reshape government rather than simply re-size government. Call it uncommon sense.