Accessibility links
Some Lives Changing Radically In Tunisia While it may take months — and even years — for Tunisia to build a functioning democracy after protests and the flight of the former president, many in the country say they felt the effects of freedom immediately. 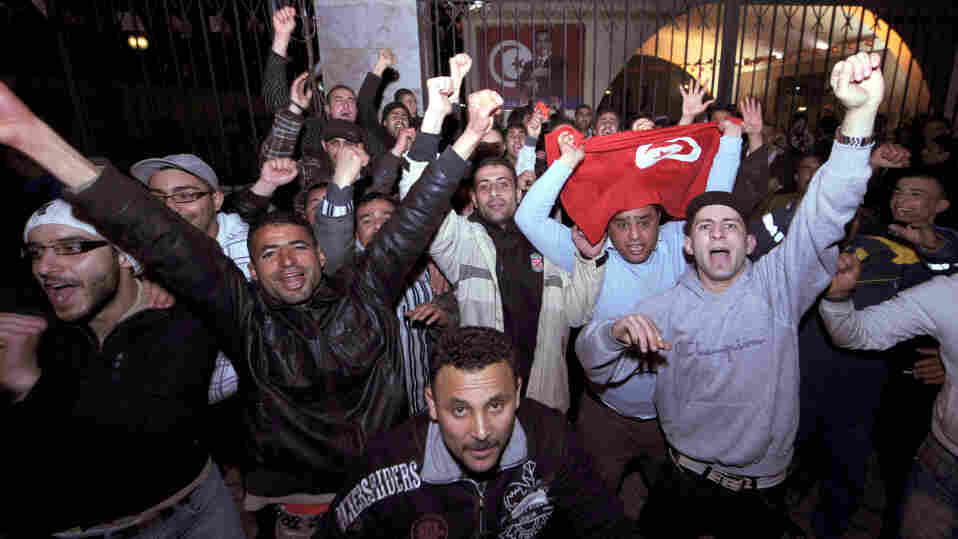 People celebrate in Tunis after Tunisian President Zine El Abidine Ben Ali's address to the nation on January 13, 2011. Ben Ali said he would not seek another term in office and ordered police to stop firing on protesters as he sought to quell mounting unrest. Fethi Belaid /AFP/Getty Images hide caption 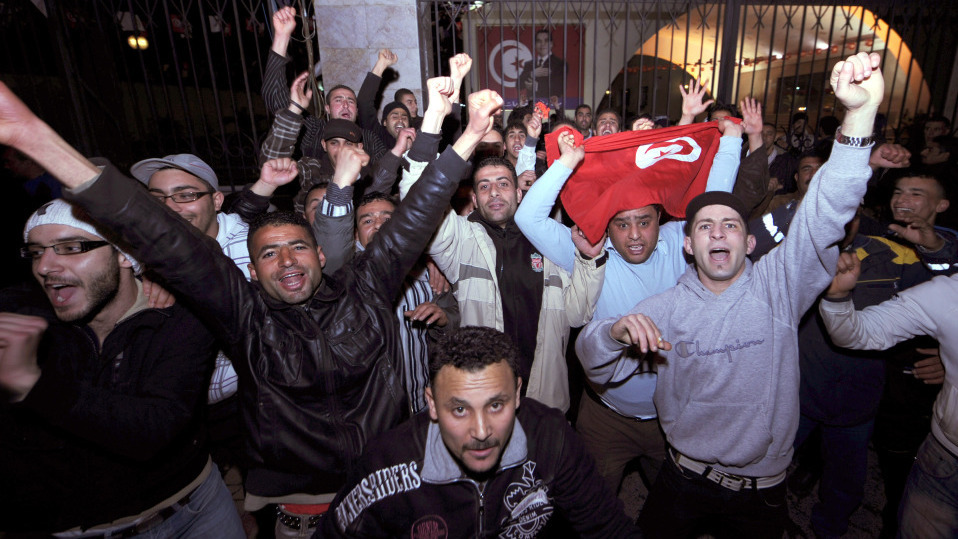 People celebrate in Tunis after Tunisian President Zine El Abidine Ben Ali's address to the nation on January 13, 2011. Ben Ali said he would not seek another term in office and ordered police to stop firing on protesters as he sought to quell mounting unrest.

Tunisia was the first Arab country to throw off its autocratic ruler, inspiring protests in Egypt. While it may take months — and even years — for Tunisia to build a functioning democracy, many Tunisians felt the effects of freedom immediately.

In just the past month, the lives of some have changed radically.

Tunisian entrepreneur Amel Jertila, for example, says things began to change as soon as the plane of leader Zine El Abidine Ben Ali lifted off from Tunisian soil, taking him into exile in Saudi Arabia.

"We start to speak and criticize him, and I had a feeling of freedom that day, like something just, you know, it's a fantastic feeling," Jertila says.

On a recent day, Jertila sits in her small office with a big smile on her face. There's an empty space with a picture hook on the wall above her computer. That's where the obligatory portrait of former President Ben Ali used to hang.

"We wanted to break that picture, and then we said no, we will not break it," Jertila says. "We're gonna go all outside, we're gonna burn it and give a message to the new government. We don't want to have any president picture in the future."

Jertila says the corruption and fear of Ben Ali's dictatorship was interwoven with a stifling bureaucracy. It was a sort of vicious circle, she says, that no one could escape.

If you made any profits at all, they were taken away in taxes and government fees, Jertila says. She managed three small companies. She says she had to bribe port authorities if she wanted her shipments to clear in a matter of days and not weeks. And she says the president and his family monopolized almost every business sector — and that those who competed with them were often driven into bankruptcy.

Across town, criminal lawyer Najet Irgui, 33, also says she has felt the effects of the regime change. She says her profession is undergoing its own revolution because under Ben Ali there was no independent judiciary.

"Ben Ali's government told judges how they should decide cases and how they should work," Irgui says. "Judges would get a phone call, and if they refused orders, there would be repercussions."

Both of these women say that just one month ago they would have been deathly afraid to speak with the media for fear that the reporter might be a spy.

People everywhere on the streets of Tunisia's capital say they are exhilarated to be able to speak freely for the first time. Outdoor cafes have come alive with conversations on topics other than football. But the biggest difference now, locals say, is the happy and hopeful expressions on people's faces.

Jertila shows off her collection of ergonomic, recyclable office furniture. She says she wants to introduce Tunisian businesses to the "green" concept. This latest shipment of furniture arrived at the port in mid-January during the revolution.

"When the port was open again I wanted [to] clear it out," Jertila says about her shipment. "I knew that I had to pay to speed up the job. So I was thinking, I pay, I don't pay. People died for this. I shouldn't encourage them anymore; and then I said — I will not do it!"

Jertila told port authorities they had the legal documents to clear the shipment normally, and if it was held up they would have to explain why.

"So I put them in front of their responsibility, and in this situation they were scared," Jertila says. "I got my container out after three days, which is a very, very good sign for me that things are changing."