Accessibility links
Movie Reviews - 'Gnomeo and Juliet' - Shakespeare, Cheerfully Plastered Lawn gnomes stand in for feuding Veronese in a charming animated retelling of the star-crossed-lovers tragedy, which ditches most of the disasters to make things a bit more kid-friendly. 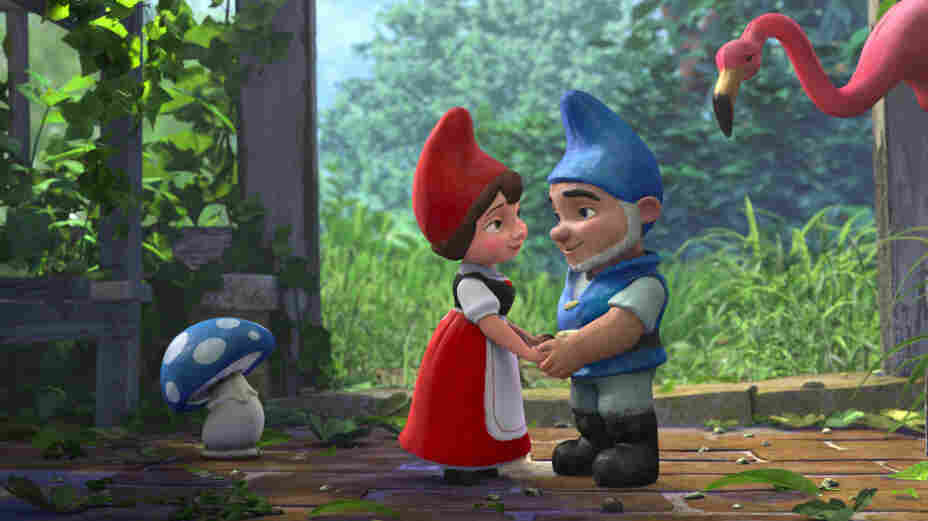 What's in a gnome, anyway?

When Leonard Bernstein wanted to retell the Bard's oft-told tale of warring clans and star-crossed lovers, he called it West Side Story. Peter Ustinov parodied it in his Cold War spoof Romanoff and Juliet. Hell, the Bard stole his plot from an Italian folk tale. So far be it from me to say plaster garden gnomes aren't the 21st century way to go with a kid-friendly Gnomeo and Juliet.

Didn't those teen lovers come to a tragic end, you murmur? We'll get to that, but first let's set the scene.

Twinned mailboxes, numbered "2B" and "Not 2B" (a painted red circle with a slash), are the first sign of conflict in the tidy little suburban neighborhood our heroes call home. The garishly overdecorated backyards they reside in are the next; it's clear, chaotic evidence of cul-de-sac one-upmanship in overdrive.

Gnomeo's landscape, populated by more concrete rabbits than you can shake a hoe at — and by gnomes attired principally in blue — centers on a porcelain toilet (used as a birdbath) with a wisteria vine growing from its tank. The governing aesthetic appears to be "more is more."

Not to be outdone, Juliet's domain, which is populated by red-clad gnomes, has a vaguely medieval bent, boasting a turreted plaster castle festooned with Christmas lights and an artificial pond inhabited by concrete frogs and plaster fish.

The filmmakers have imagined that these ignome-inious clans party hearty in their respective yards while the homeowners are away at work — but that they have little over-the-hedges contact except when they compete in back-alley drag races. (Lawnmowers revving like mad, camera angles borrowed from '50s film classics.) Enter fate, in the form of a pretty orchid Juliet spies in an abandoned greenhouse, and an annoying plastic flamingo Gnomeo finds in a shed. Soon the two kids have been brought together, and you know how the story goes from there.

Flower power: An attempt to steal a rare Cupid's Arrow orchid helps bring Gnomeo and Juliet together in the starlight.

Except of course, that in this family-friendly offering, it can't go where it usually does. Oh, it makes a few stabs at following the Bard's plan. Juliet's cousin Tybalt gets smashed to shards in a fight with Gnomeo, who gets spirited to a local park where skateboarders toss him atop a chatty statue of Shakespeare. (Gnomeo's story reminds ol' Bill of one he once told, one that didn't end so happily.) But mostly the misadventured overthrows have been ... well, overthrown. A frog stands in for Juliet's nurse; there's no apothecary, no Mercutio, and poetry's not really on the cinematic menu, though there are some pretty classy thespians emoting inside all that plaster.

"Gnomeo, Gnomeo, are we really doomed never to see each other again?" is what Juliet (voiced by Emily Blunt) wonders from her perch above the garden, not knowing that Gnomeo (James McAvoy) is hiding in the shrubs below. His mom is voiced by Maggie Smith, her dad by Michael Caine, and elsewhere parents will recognize voices as diverse as Jason Statham (Tybalt) and Patrick Stewart (as Shakespeare's statue).

Theatrically inclined parents will also appreciate a passing reference to the Rosencrantz and Guildenstern Moving Co., as well as more contemporary references — a "wish I could quit you" throwaway, for instance, from gnomes who want to go their separate ways but share a pedestal.

The animation, by Starz, the Canadian animation house responsible for Shane Akers' weirdly fascinating apocalyp-toon 9, is sprightly, and it effectively evokes plaster figures, as does the sound design. (When Gnomeo takes Juliet's hand, there's the faintest of clinks.)