Accessibility links
Movie Reviews - 'Cedar Rapids' - In the Big(gish) City, It's Never Too Late To Come Of Age Ed Helms stars as a naive small-town insurance salesman sent to Iowa's second-biggest city for a convention.Miguel Arteta's film taps a well of pent-up Midwestern aggression — and feels as if its comedy has been earned by experience.

In 'Cedar Rapids,' It's Never Too Late To Come Of Age

In 'Cedar Rapids,' It's Never Too Late To Come Of Age 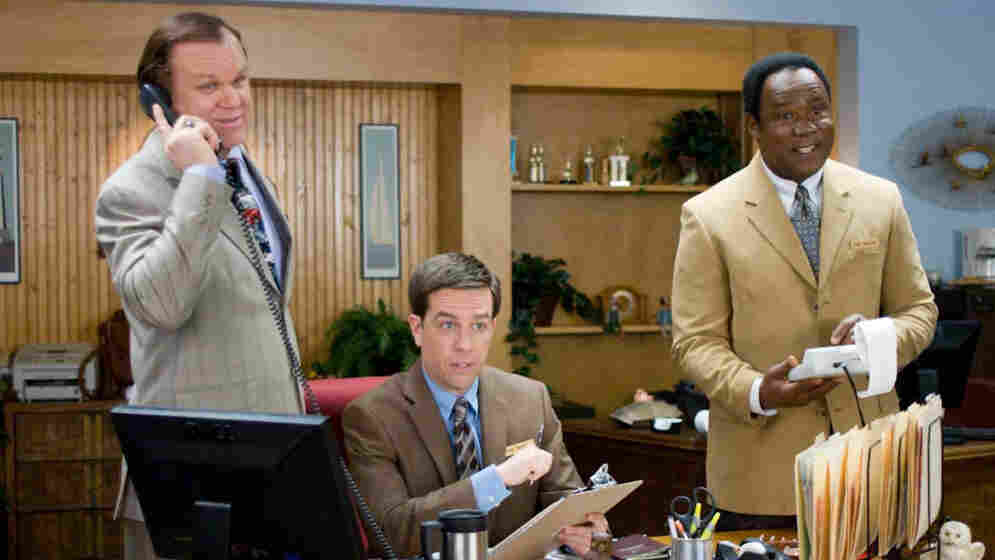 Rated R for crude and sexual content, language and drug use

'Check Out These Digs!'

'Check Out These Digs!'

'Who Wants To Get Wasted?'

'Who Wants To Get Wasted?'

'I Don't Trust People With Ponytails'

'I Don't Trust People With Ponytails'

Midwestern mellow, a gift that keeps on giving to American cinema, takes an affectionate ribbing in Cedar Rapids, a slight but exuberant new comedy from Miguel Arteta, who also made the far stronger Chuck & Buck and gave Jennifer Aniston her finest hour in The Good Girl.

Here, Ed Helms — who perfected a genially understated lunacy in television's The Daily Show and The Office, and in the surprise indie hit The Hangover — stars as Tim Lippe (as in Skippy), an insurance salesman with dorky hair and sparkly teeth bared in a permanently welcoming smile.

Tim is that familiar figure, a small-town rube whose engines run on an orderly routine. He's Iowan. He's Christian. Yet there are hints of unruly desire in the fact, revealed to us moments after the opening credits, that once a week he makes the bedsprings bounce with Macy (Sigourney Weaver), a much older woman to whom he considers himself "pre-engaged."

Then again Macy, who's a much freer spirit than she lets on, speaks to Tim in much the same tone she used as his seventh-grade teacher. That and the butterscotch candy the man keeps next to his bed suggest that this motherless son is overdue for wider horizons in the interests of personal growth. So when a beloved colleague suddenly expires of erotic asphyxiation, and Tim's smooth-talking boss (Stephen Root) dispatches him to an industry convention to claim an award that his company mysteriously wins every year, our Candide-ish hero embraces his trip to the exotic metropolis of Cedar Rapids as if it were a cross between a Hawaiian vacation and the Second Coming.

Unsurprisingly, the big city, represented by a third-tier beige business hotel equipped with a pratfall-ready indoor pool and a readily available hooker (Alia Shawkat), turns out to house a microcosm of the world beyond Tim's trusting ken. His first rude shock is the burly African-American gentleman (The Wire's Isiah Whitlock) who greets him in his hotel room; a second roomie soon follows in the person of the infallible John C. Reilly, playing a cocky blowhard secretly grieving a missing wife. Briskly rounding out the posse: a terrific Anne Heche as a knowing minx who's looking for relief from her numbing family life and who offers Tim his first chance at grown-up hanky-panky.

The usual business-trip sins ensue — a little sex, a lot of drugs, a whole pile of corporate corruption — all pre-programmed to uncork longings within Tim's unnaturally serene breast, to force on him a salutary loss of dignity, and finally to strengthen his backbone so that he and his three oddball musketeers can stick it to The Man.

As a satire of the insurance industry, and more implicitly of religious hypocrisy, Cedar Rapids is mild stuff. But the movie has a nice lived-in feel, and a sense that its comedy has been earned: Arteta's father was a salesman, and Cedar Rapids is crisply written by Wisconsin native Phil Johnston.

And the guiding hand of co-producer and Nebraska native Alexander Payne, whose Citizen Ruth and Election cut to the heart of pent-up Midwestern craziness, is all over Helms' strategically restrained rendering of an overgrown schoolboy joyfully getting into trouble for the first time. This is a protagonist who becomes a man without losing his innocence — or his bred-in-the-bone decency.

True, the topsoil message of Cedar Rapids is the usual populist guff about little guys banding together to speak truth to power. But the movie has something more interesting to propose — namely that none of us has reason to feel smug, and that if the unexamined life is not worth living, the unlived life is not worth examining.