It Must Have Been Fate: 'La Forza del Destino' 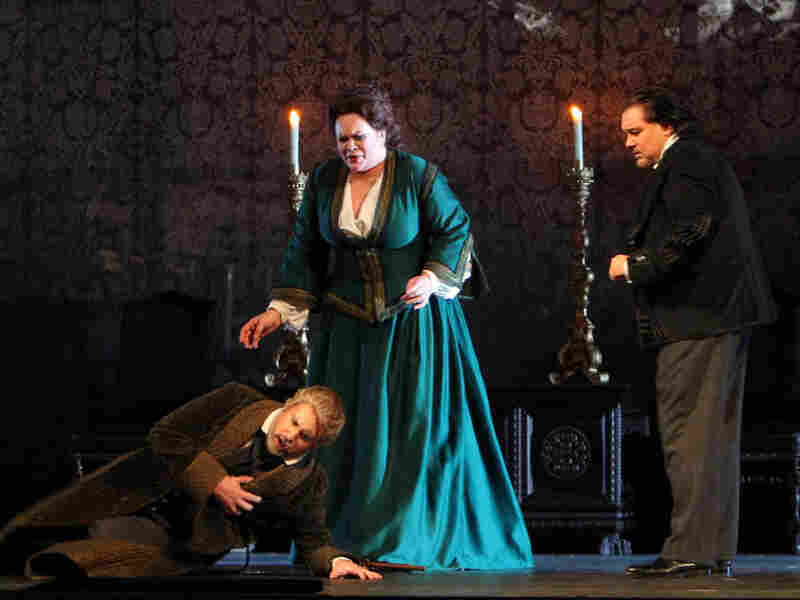 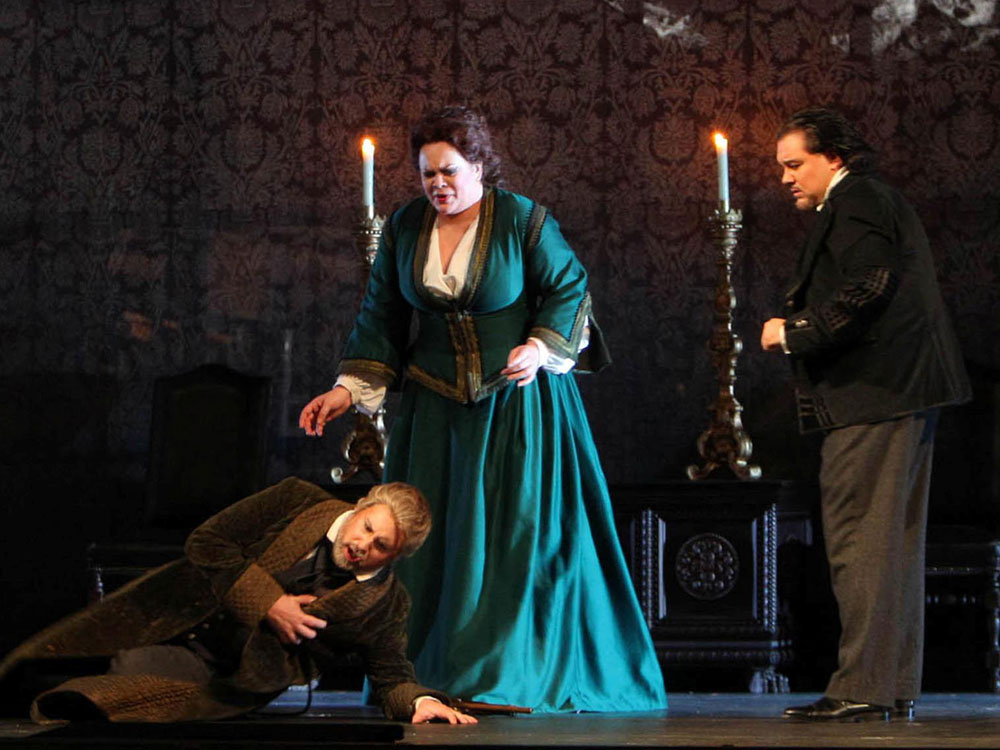 The opera ends with an intense trio. Alvaro (tenor Salvatore Licitra) feels cursed by fate, and by God. The Father Superior (bass Roberto Scandiuzzi) urges him to humble himself, rather than cursing the Lord, while Leonora resigns herself to death, saying she'll wait for Alvaro in Heaven.

The opera's final scene opens with the aria "Pace, pace, mio dio" — "Peace, my lord." Leonora (soprano Violeta Urmana) is outside the cave where she lives as a hermit, singing of her love for God, and for Alvaro. She's interrupted by the sound of fighting in the distance, as Carlo and Alvaro begin their duel, and the aria ends as she curses the intrusion on her "sacred retreat."

When puzzling events happen in life — things that simply can't be explained, or at least can't be explained simply — people often put them down to fate. It's as though ascribing our troubles to fate somehow relieves us of the need to understand them. But what is fate, really? At best it's a difficult concept to grasp, much less explain in words. That may be why so many evocations of fate can be heard in music, a medium in which words are optional.

The most iconic musical tribute to fate may or may not have been intentional: It's uncertain whether Beethoven actually considered the opening notes of his Fifth Symphony to be "fate knocking at the door," as they've often been described. But other examples are more obvious, and they come in a wide range of music: from Fatum, a portentous tone poem by Tchaikovsky, to the heavy metal tune "Fates Warning" by Iron Maiden and the catchy song called "Fate" from the Broadway hit Kismet.

Naturally, there are also plenty of operas that dwell on fate, and few do it so dramatically as Giuseppe Verdi's La Forza del Destino — The Force of Destiny.

Verdi composed the opera to end an extended hiatus from music — a three-year span in which he wrote no new operas and actually told friends that he was no longer a composer. The commission that brought him back to the opera house came from the Imperial Theater in St. Petersburg. After considering a number of subjects for a new opera, Verdi chose a Spanish play called La fuerza del sino — The Power of Fate. It was adapted by librettist Francesco Maria Piave, who also worked with Verdi on several other operas including I Due Foscari, Macbeth and Rigoletto.

As for the story itself, it's surely appropriate for an operatic exploration of fate. Like so many events in life that are attributed to fate, the goings on in the opera are hard to explain any other way. In truth, they're sometimes difficult to explain at all.

Still, like fate itself, the power of Verdi's score for the opera is undeniable. The music transforms a twisty story line into one of the most compelling of all his operas.

On World of Opera, host Lisa Simeone presents La Forza del Destino in a production from the Maggio Musicale in Florence, Italy. The stars are soprano Violeta Urmana as Leonora, tenor Salvatore Licitra as her beloved Alvaro and baritone Roberto Frontali as Carlo, who for a moment is Alvaro's ally, but soon becomes his most deadly enemy. The performance is led by conductor Zubin Mehta. 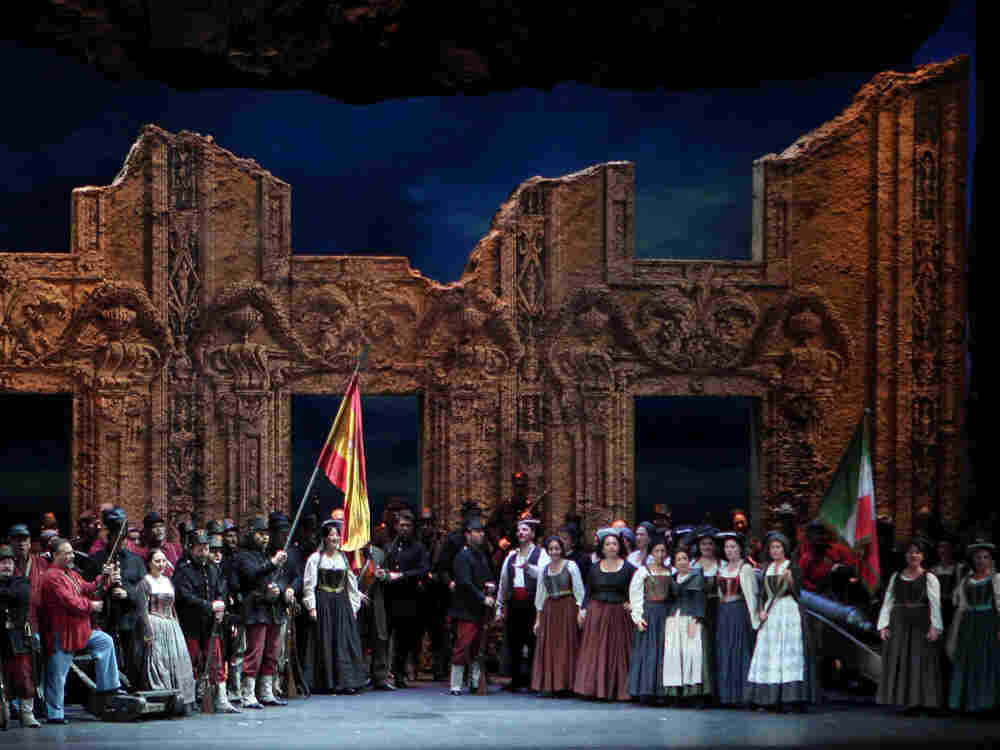 A war with Germany is one of the subplots in this opera, and everyone gets into a a patriotic frenzy when the old woman Preziosilla urges the men to join the cause. Maggio Musicale Fiorentino hide caption 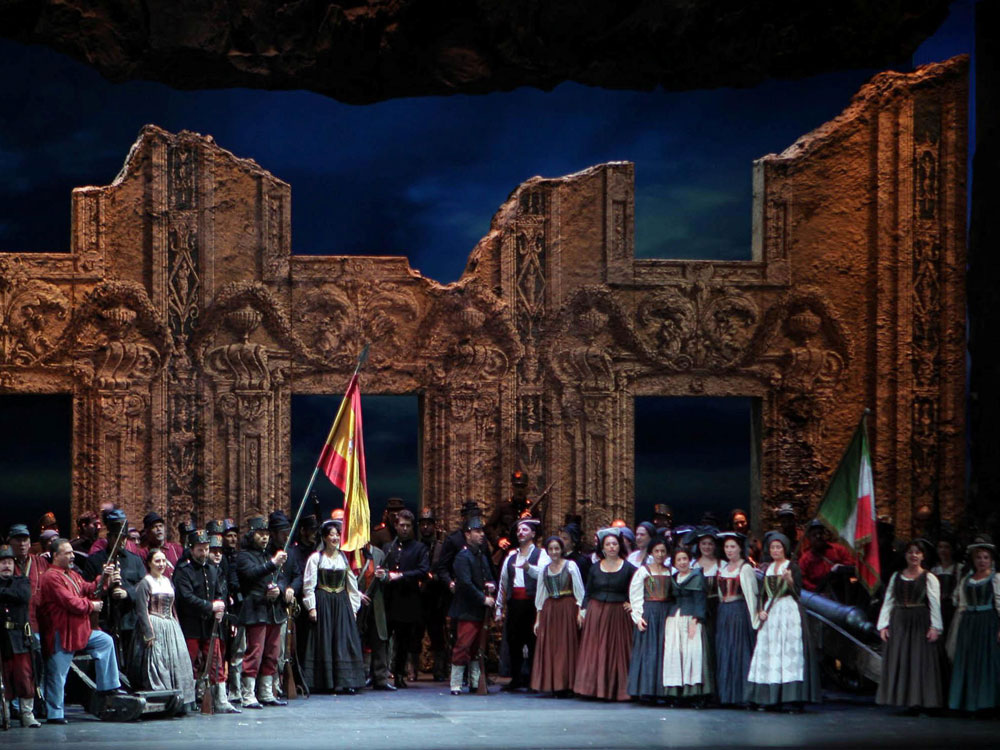 A war with Germany is one of the subplots in this opera, and everyone gets into a a patriotic frenzy when the old woman Preziosilla urges the men to join the cause.

The opera has a complex plot but only three main characters. Understanding those characters and what drives them can go a long way toward clarifying the story.

First, Don Alvaro. He's the son of a disgraced Spanish nobleman and an Incan princess. He was born in the New World and his parents have been executed. Back in Spain, Alvaro is trying to establish his reputation. But given his ancestry, he's frowned upon in noble society, and many people simply call him "The Indian."

The other two characters to focus on are a brother and sister, Carlo and Leonora. They're the son and daughter of the Marquis of Calatrava, head of a proud but fading noble house.

ACT ONE begins in Leonora's rooms in the Calatrava mansion. After her father says good night and retires, Leonora and her maid Curra quietly prepare to leave. Leonora has fallen in love with Alvaro. Her father disapproves of the relationship — to put it mildly. So Leonora and Alvaro have made plans to elope, and Alvaro is expected at any moment.

Leonora is still waffling over whether she should come clean and tell her father about their plans. Before she can make up her mind, Alvaro arrives, and as they're about to leave, they hear her father coming up the stairs. When he discovers Leonora and Alvaro together, the Marquis promptly insults Alvaro and disowns his daughter.

Alvaro says Leonora is innocent of any wrongdoing. Calatrava won't listen and challenges Alvaro to a duel. In an act of submission, Alvaro throws down his pistol, offering his own life for his supposed transgressions. But when the gun hits the floor, it accidentally goes off and Calatrava is fatally wounded. He curses Leonora as he dies and she escapes with Alvaro.

ACT TWO begins more than a year later, at a roadside inn near a small Spanish town. Leonora and Alvaro have been separated. Carlo has vowed to avenge his father's death by killing both Alvaro and his own sister.

By coincidence, Carlo and Leonora are both staying at the inn. Leonora is traveling disguised as a teenaged boy. She spots Carlo from her window as he arrives and hides in her room to avoid him. Carlo is also incognito, pretending to be a poor student. Carlo knows about the "boy" staying in an upstairs room and is suspicious; he asks around about this mysterious guest but gets no answers.

A gypsy woman called Preziosilla tells everyone about the war being fought in Italy against the Germans. She urges young men to join the cause and they agree. The rousing scene is interrupted when a group of pilgrims passes by.

Carlo then tells the others his story as Leonora eavesdrops from her window. He says he's been tracking an Indian who seduced his sister, and now thinks the man has fled back to South America.

The next scene takes place outside a monastery in the mountains. Leonora, thinking Alvaro has abandoned her, has decided to seek refuge. She rings the monastery bell, and a Monk named Melitone goes to fetch the Father Superior. Leonora tells him her story, saying she wants to live out her life as a pious hermit.

The monks decide she can live alone in a nearby cave. They'll leave food for her and she'll be given a bell. When she grows old and feels she's near death, she can ring this bell and someone will come to perform the last rites. Until then, she will never be disturbed. Leonora agrees and the monks file into the monastery. 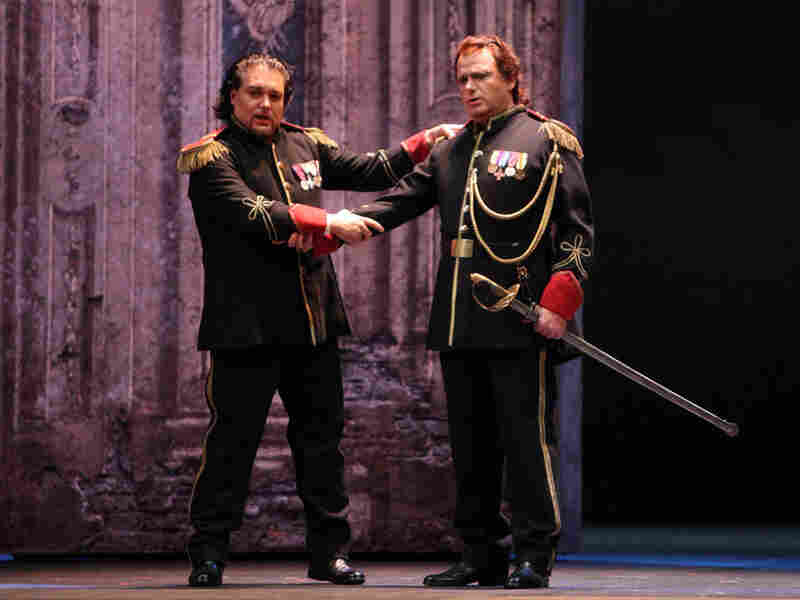 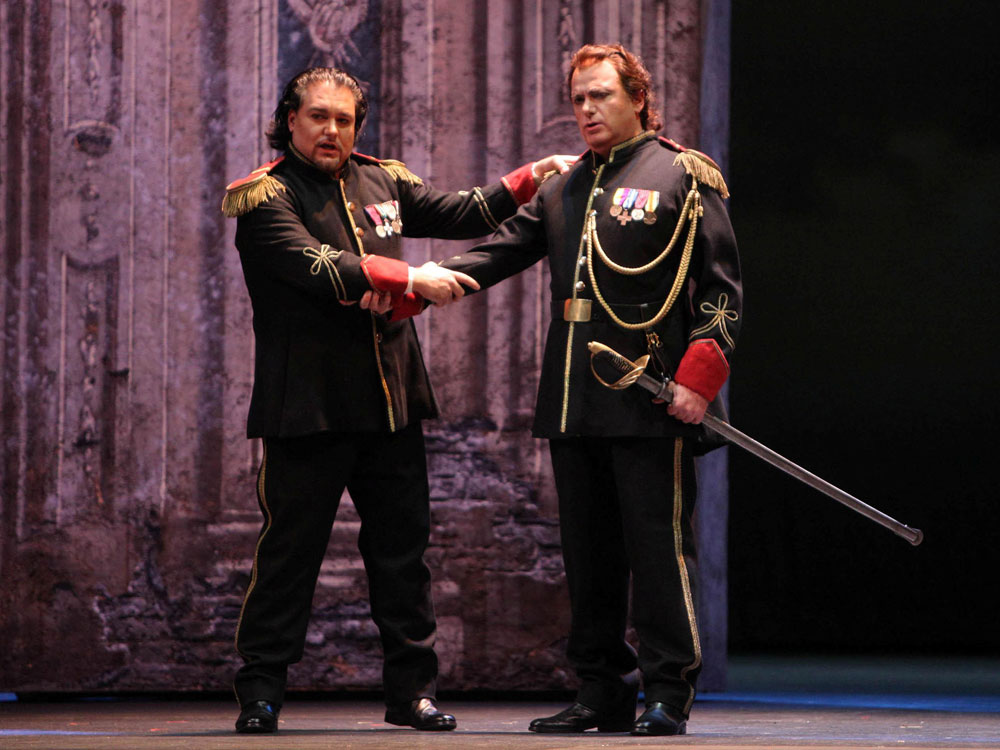 Alvaro (Salvatore Licitra) and Carlo (Roberto Frontali) join the army under false names and become friends, little knowing that they are mortal enemies.

As ACT THREE opens, Alvaro is in Italy fighting with the Spanish army alongside the Italians. There's a commotion nearby. Carlo, who is also fighting with the army, is under attack and Alvaro saves his life. Both have joined the war under false names, so neither man knows who the other really is, and they quickly declare a pact of eternal friendship.

The scene changes to the Spanish army camp, where men are watching the battle progress. Their army wins, but afterward Alvaro is carried in, severely wounded. Carlo reassures him, saying he'll receive the order of Calatrava for his bravery. When Alvaro hears the name Calatrava he says "never," and Carlo begins to wonder if his new friend may actually be his old enemy.

Thinking he's about to die, Alvaro gives Carlo the key to his trunk, saying it contains a packet that must be burned after his death, without being opened. Carlo promises he'll see to it. When he opens the trunk and finds the packet he has second thoughts, but decides to keep his word.

However, he can't resist rummaging around in Alvaro's other belongings, and he finds a picture of Lenora. Now, knowing Alvaro's real identity, he prays for the wounded man to live — so he can kill him himself. When the surgeon announces that Alvaro is going to pull through, Carlo rejoices. Now he'll finally have a chance to avenge his father.

The next scene is in another military encampment. Learning that Alvaro has fully recovered, Carlo confronts him, but the two are separated by a patrol of soldiers and Carlo is dragged away. Alvaro throws down his sword and swears he'll retire to a peaceful life in a monastery.

The gypsy woman Preziosilla appears along with other women who have been following the army. She offers to tell fortunes for the assembled soldiers. Groups of peasants and beggars also come into the camp, along with the monk Melitone, who is shouted down when he tries to deliver a sermon. To close the act, Preziosilla leads the flamboyant "Rataplan" chorus.

At the start of ACT FOUR, five years have passed and the story resumes outside the monastery where Alvaro has taken refuge. It's the same monastery where Leonora sought protection as a hermit many years ago. The cranky Melitone complains about the new friar called Father Raffaele, the name Alvaro has assumed.

The monastery's bell rings and the monks find Carlo at the gate, inquiring about this so-called Father Raffaele. When Melitone calls for him, the two enemies confront each other again. Carlo wants to fight it out, while Alvaro offers a truce. But when Carlo insults Alvaro as a half-breed, Alvaro has had enough. The two go off, looking for a suitable place to fight a duel.

The last scene takes place in a remote valley, outside the cave where Leonora has been living. In the aria "Pace, mio dio" — "Peace, my lord" — she expresses her love for God and for Alvaro. When she hears people approaching she curses them for intruding, and retreats into the cavern.

Carlo and Alvaro appear, with swords clashing, and Carlo is mortally wounded. Suspecting that someone is in the cave, Alvaro calls out. When Leonora emerges, the two recognize each other. She joins him briefly and then runs off to help her brother. Before long, she staggers back, bleeding from a knife wound. Carlo stabbed her as he was dying and now she's near death as well. The Father Superior appears along with the other monks. As they pray together, Leonora dies, leaving Alvaro to declare that he's been cursed by fate yet redeemed by Heaven.