Accessibility links
A Clever Hero: Slave Revolt Leader Charles Deslondes In 1811, more than 200 slaves revolted against plantations along the Mississippi River near New Orleans. White planters formed militias to quash what became known as the German Coast Uprising. Two white men and almost half of the rebels were killed. One of the leaders of the revolt was Charles Deslondes. Guy Raz, host of NPR's Weekend All Things Considered, pays tribute to Deslondes. 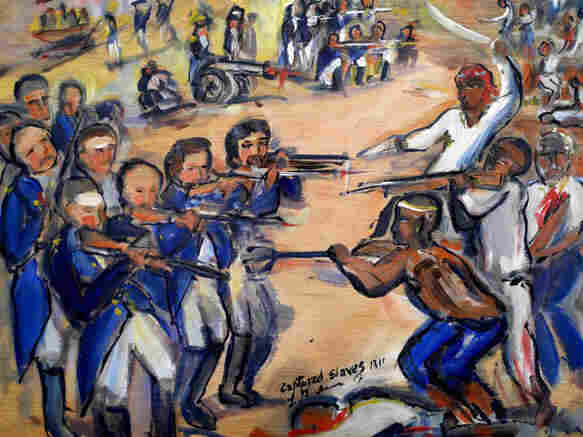 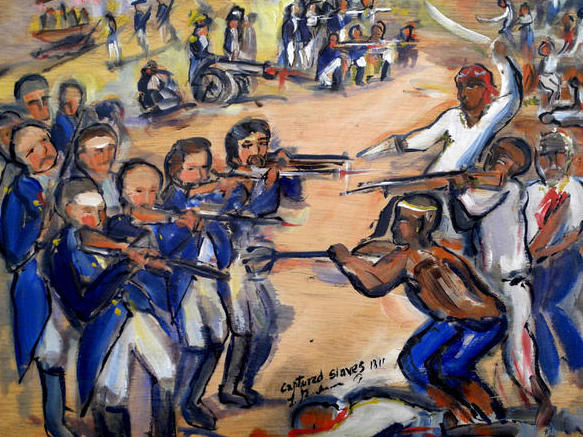 This portrait depicts the Louisiana slave revolt in 1811 led by Charles Deslondes.

February is Black History Month and Tell Me More observes the month with a series of short vignettes. In this installment, NPR host Guy Raz shares his black history hero.

This is Guy Raz, NPR host of Weekends on All Things Considered, and my black history hero is Charles Deslondes.

Deslondes was, ostensibly, a loyal slave-driver ... a slave who also oversaw his brutal master's vast plantation.

Deslondes was feared by slaves and trusted by white plantation owners.

But all the while, he was plotting…planning and preparing.

And on the night of January 8, 1811, along Louisiana's German Coast, he led the largest slave uprising in American history.

500 slaves joined Deslondes and his co-conspirators as they made their way past the plantations along the road to New Orleans.

This proud battalion of black faces, most dressed in military uniforms, some on horseback, all marching in formation—stunned white New Orleans.

There were only two possible outcomes for these men of Africa: death or freedom.

Deslondes and his contingent knew that.

And in the end, they were outgunned.

But in death, Deslondes and these other martyrs of American history found their dignity and, of course, their freedom.