Accessibility links
Fossil Suggests Lucy Had The First Modern Foot A new fossil find from Ethiopia suggests that the first full-time walkers with the first modern foot weren't human at all, they were Australopithecus — aka Lucy. But scientists caution that just because Lucy and her kind could walk doesn't prove they gave up life in the trees permanently. 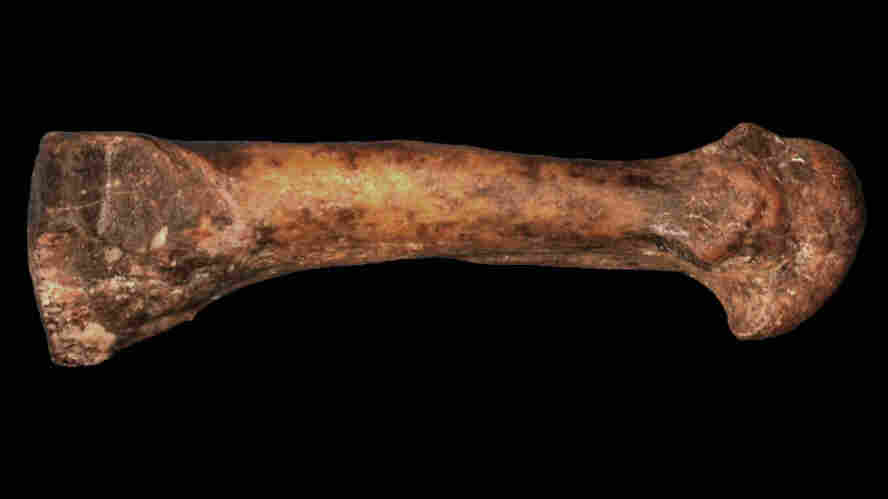 This foot bone, the fourth metatarsal, connects the heel to the fourth toe. The 3 million-year-old fossil suggests that Australopithecus — Lucy and her kind — could have been the first upright walkers. Carol Ward and Elizabeth Harman/Science/AAAS hide caption

In human evolution, the birth of the modern foot was a big deal. With its high arch and stiffness, it led to long-distance walking, running and, eventually, podiatry.

What's in dispute is just when this anatomical wonder evolved. Now scientists have discovered a bone they think may answer that question. But it's controversial — other experts are skeptical, and the discovery has the makings of another fossil feud.

Video: Imaging Footprints To Understanding How We Walk

If the human foot were a building, it would be a cathedral: Twenty-six bones and more than 100 muscles and tendons form an arched limb that's stiff, but also elastic. It's the kind of foot you need to quit living in trees and make a home on the range.

"It's sort of a window into humanity," says William Jungers, a paleoanthropologist at Stony Brook University in New York. In fact, the modern foot probably came before the modern brain.

But when, and how?

Giving Up Life In The Trees?

Now scientists have a bone from Ethiopia that they say has a radical message — that the first full-time walkers with the first modern foot weren't human at all but were Australopithecus. That would be Lucy, the sort of half-ape, half-human that lived a couple of million years before humans evolved.

The bone is the fourth metatarsal — the long bone that connects your heel with your fourth toe. It's a little over 3 million years old.

Anthropologist Carol Ward from the University of Missouri is one of the scientists who studied it. "What this fossil does is show us that the foot of Australopithecus was fully humanlike," she says. "It was arched from front to back and from side to side, and the foot was very stiff and inflexible up through the middle."

Writing in the journal Science, Ward says the bone shows that Lucy and her kind had given up life in trees. "If they went in the trees they wouldn't do it much better than you or I would," she says.

More On The Evolution Of The Human Foot

But is one bone enough to prove that? Jungers, for one, says no. Sure, Lucy's kin had at least a partial arch and could walk, but the new bone doesn't prove that the big toe and other foot parts like the crucial inside of the arch — the nave of the foot cathedral, if you will — was like ours.

He says it also doesn't prove that Australopithecus had swapped trees for terra firma.

"You know, if you were betting a modern human and an australopithecine in a climbing contest, I'll tell you who to put your money on," Jungers says.

Other scientists were similarly skeptical. They say it will take more bones to decide if this one really rewrites history, or is just another fossil footnote.