Accessibility links
Pump On: A 'Sublime' Biography Of The Human Heart Penned by the sibling team of novelist Stephen Amidon and cardiologist Thomas Amidon, The Sublime Engine captures the story of the human heart through the world of science, history, culture and our bodies.

It turns out that the classic red heart symbol we see almost everywhere around Valentine's Day doesn't look much like a real human heart at all.

"Of all the theories about where that symbol comes from, my favorite is that it is a representation of a sixth century B.C. aphrodisiac from northern Africa," says Stephen Amidon, a novelist and co-author of The Sublime Engine: A Biography of the Human Heart. "And I kind of like that history because it sort of suggests that early on, people sort of understood the connection between love and the heart." 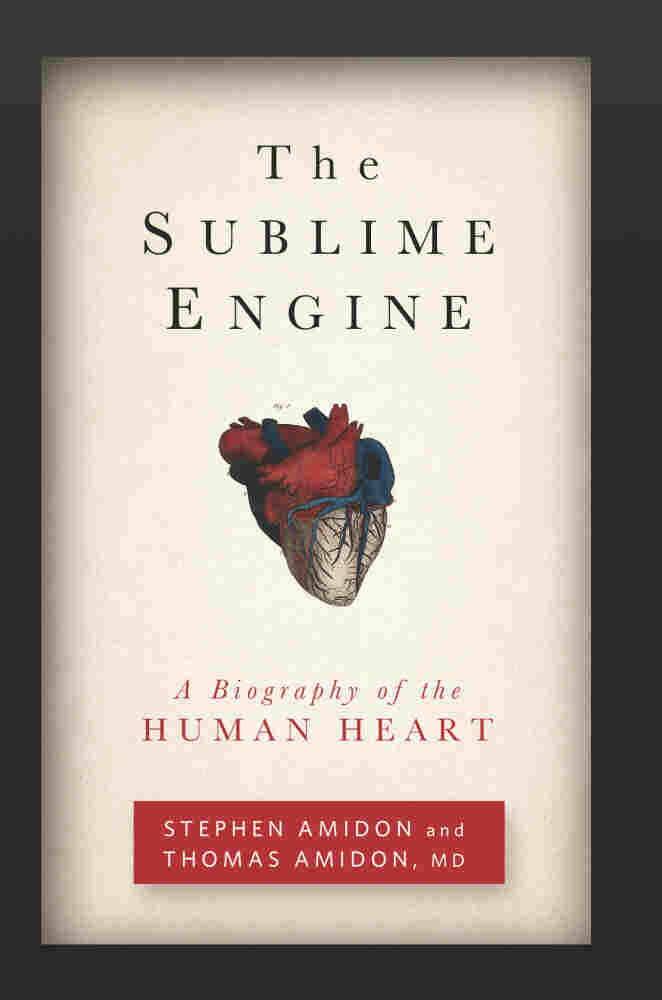 Stephen Amidon wrote the book — which traces the story of the human heart through the world of science, history, culture and our bodies — with his brother, Thomas, a practicing cardiologist in Montana and a former medical director of The Hope Heart Institute.

"Ironically, I did an angiogram on a patient last week who had very calcified and hardened arteries that were almost precisely in the shape of the Valentine heart," Thomas tells NPR's Scott Simon. "But I don't think the early depicters of that heart shape had access to the same view of the heart that I have."

A Heart Without Feeling?

Some of the early physicians of the Renaissance didn't have the medical skill or knowledge to care for traumatic injuries to the heart. And in some cases, they didn't even know what they were looking at inside the body.

Stephen Amidon recounts the story of Hugh Montgomery, a young 17th-century Irish nobleman who fell from his horse onto a fence, opening a hole in his chest that doctors couldn't close. But the young rider didn't die — he actually got better.

"And yet he had a hole in his chest, which exposed some inner workings," Stephen says. Later in life, the boy's father fashioned a metal plate to cover the injury. "But if you took that metal plate off, you could actually see something in there."

Until his young adulthood, people thought it was his lung. The boy toured Europe, selling out theaters where he would remove the plate to show the insides of his body working.

"It wasn't until Sir William Harvey, the greatest of all cardiologists, took a look inside his chest that he realized it wasn't the lung at all that they were looking at — it was the heart," Stephen says. "And this was really the first time anyone had seen the actual working of the heart."

He'd even let people reach in and touch his heart — and he wouldn't feel anything.

Weighing in at a mere 15 ounces, the heart beats roughly once per second — that's about 2.5 billion times during an average lifetime — and it pumps 74 gallons of blood through the adult body every hour, the Amidons write. 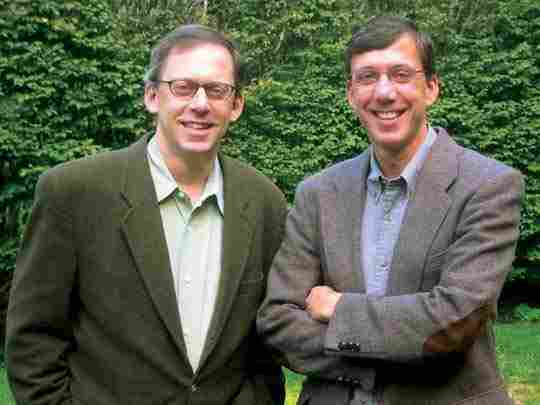 Stephen Amidon (left) is the author of The New City and Human Capital. Thomas Amidon is a cardiologist in Montana. Rodale hide caption 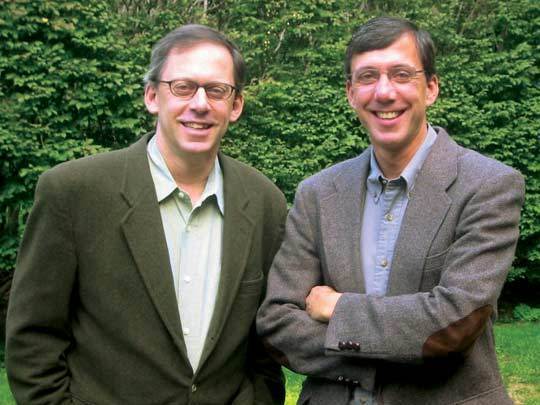 Stephen Amidon (left) is the author of The New City and Human Capital. Thomas Amidon is a cardiologist in Montana.

Thomas says that one of the remarkable advances in medical technology was the ability to stop the heart during an operation. It was the development of the heart-lung machine in the 1950s, he says, that allowed surgeons to stop the heart and operate on it.

This technique was crucial for a Minnesota surgeon named C. Walton Lillehei, who pioneered the treatment of congenital heart defects. In 1954, Lillehei needed to patch a hole in the heart of an 11-year-old boy. He began the operation by connecting the circulatory system of the boy to his father.

"So the father actually became the heart-lung machine that allowed Lillehei to have the 18 minutes or whatever it took for him to fix the hole in the boy's heart," Stephen says. He went on to perform the operation on numerous sick and dying children — many of them babies. The practice of cross-circulation, as it was known, was later abandoned because it became too risky for both the adult and the child.

"The irony, of course, is that now, in 2011, we're working diligently on techniques to operate on the heart without having to stop it," Thomas says.

As for artificial hearts, Thomas says the difficulty isn't in devising a pump — "that's been pretty well worked out," he says — it's finding a way to have the blood that flows through the system not cause problems, like blood clots.

But as heart transplants, surgical techniques and mechanization become more commonplace, will the heart lose any of its cultural and metaphorical significance? Stephen Amidon doesn't think so.

"One of the things that surprised me during the course of writing this book was how durable the heart's metaphorical power has been — not just in the past 50 years in the great explosion of cardiology, but in the past 500 years since the great anatomists of the Renaissance began opening up bodies and began looking at the physical heart," he says.

Even as all this was happening, the heart has retained its metaphorical power.

"So perhaps there will be a day when we no longer touch our chest and kind of nod, and people understand we're talking about qualities that can't be explained by medicine — we're talking about courage or devotion or inspiration," he says. "You can have a situation where someone receives an artificial heart, and afterward goes to their surgeon and says, 'I thank you for this from the bottom of my heart.' This will make complete sense to us."

Imagine that you are a primitive. You have just clawed your way to the top rung of the evolutionary ladder. You have achieved humanity. Your mind is developing a capacity for the self-consciousness that will be your defining characteristic as a member of the species Homo sapiens. You are aware of yourself as being distinct from others, with private thoughts and complex relationships with those around you. You have a self.

You lie in your cave after a long day's hunting. Although you do not yet possess anything that could be called language, you find yourself able to string together connected thoughts. As night comes and sleep approaches, you use this new awareness to take stock of your body, perhaps probing a bruised limb or savoring the taste of recent food. And then, in the dark silence, a terrible and awe-inspiring realization strikes you. It is something you have never before noticed in your grueling daily quest for simple survival.

There is something alive inside you.

Right there, pulsing beneath your ribs. It hammers out a steady rhythm that reverberates through your musculature. If you touch your neck or your wrist or your leg, you can feel its report. It is as if a small but powerful beast has lodged inside your chest. The realization excites and frightens you. With this surge of emotion, the beast responds by quickening its activity — as if it senses your fear.

For the next few days, you go about your routine. You have no choice. You must, after all, survive. But it is always there, as you hunt and feast and rest, this churning presence inside your ribs. Speeding up sometimes, slowing down in other situations — but never resting, not for an instant. In the middle of the night, when everything else is quiet, it can be as loud as thunder.

And then, in a moment as terrible and wonderful as when you first became aware of this pulsing creature, you understand something else. This is no foreign body. This is no predatory stranger trapped within your bones. It is part of you. It is you. The center of that individuality you have only recently understood. You have discovered yourself. You have discovered your heart.

For as long as we have been self-aware, we have been in awe of the fact that there is something so vital, so alive, within our bodies: a relentlessly active core with a will of its own. An animating essence that does not obey our commands the way our hands do, or our eyelids, or even our lungs. A link to the universal motion surrounding us, the tides and stars and winds, with their puzzling rhythms and unseen sources. Once this awareness dawned, it would have been impossible for us ever again to look at ourselves or the world the same way.

The heart is a mystery and a miracle. It beats roughly every second of our lives — two and a half billion times during an average lifespan. It does not rest, pumping around seventy-four gallons of blood every hour once we become adults. Although it weighs only about fifteen ounces, it is immensely strong — the amount of energy it generates in a single day could drive a car twenty miles.

And it can stop at any moment. It can stop when we are newborn babies asleep in the crib or when we are healthy teenagers walking off the practice field on a sultry August afternoon. It can arrest when we are shoveling snow in our middle age or when we are a hundred years old and our minds have been swept of memory for a decade. The heart is the ultimate arbiter of our lives. When it calls time, the game is over.

What follows is a biography of this remarkable machine. Although one of the authors is a cardiologist, it is not a medical history, despite the fact that science plays a key role in the story. And while the other author is a novelist and critic, it is not a cultural study, though works of literature, art, and film are also significant elements in the book. Nor is it fiction, though some of the stories told here are so dramatic that they will be presented in narrative form in order to fully capture the power they can wield over our imagination.

Rather, this book is an account of the different ways that we have thought about the heart ever since it first took root in the Western imagination. Whether it causes a scientist to investigate the origins of the pulse, or inspires a poet to wonder what makes that pulse race faster when he sets eyes on his beloved, the cardiac muscle has always been the object of passionate inquiry. The Sublime Engine is the history of that passion. The authors have, in the interest of focus and space, confined this biography to the Western tradition, although there is a rich tradition of interest in the cardiac organ in other cultures, from the elaborate pulse lore of traditional Chinese medicine to the Nadi Vijnana pulse science of the Indian subcontinent; from Babylonian creation myths to the bloodthirsty heart sacrifices of the Aztecs.

Stories lie at the center of this biography. The heart is filled with more than just the blood it pumps. It is also the source of a vast supply of stories. They flow through it; they echo around its chambers. Some of these stories are historical, capturing the people whose insights and experiments have furthered our understanding of the cardiac muscle. 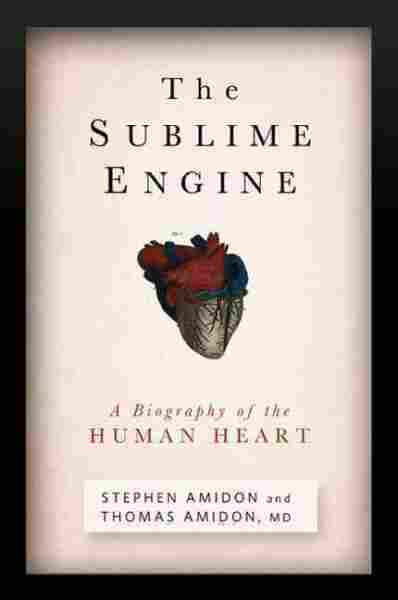 A Biography of the Human Heart