Accessibility links
Theater Review - 'Spider-Man' - Don't Be So Quick To Write Off The Dark NPR's Bob Mondello reviews Julie Taymor's much-criticized $65 million Broadway epic — and while it's not so good, it's not as bad as you might have heard. With a few changes (and a whole lot of cutting down), it might even be fun when it finally gets its official opening night. 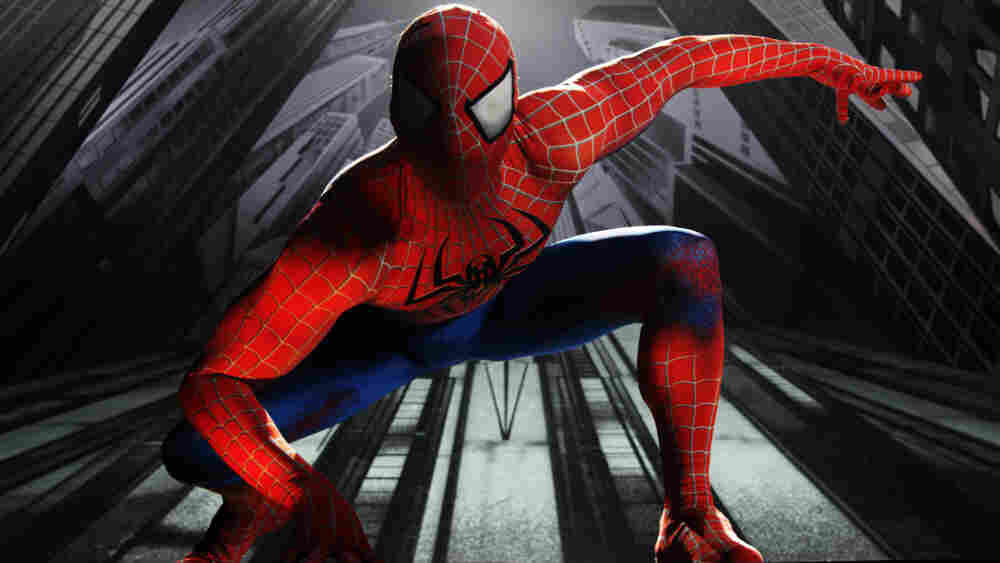 The creative team for Broadway's Spider-Man: Turn Off The Dark is climbing the walls this week. After four opening-night delays and 80 full-price preview performances, a lot of critics decided not to wait any longer, and reviewed the musical on Tuesday. They all panned it. The producers say they're still working to make the show better; meanwhile, we asked critic Bob Mondello to tell us what the folks paying up to $275 a seat — for previews — are seeing and hearing.

Let's start with something that sort of works: Near the end of the first act, there's a flying sequence that lasts maybe two minutes. The Green Goblin — a villain played by Patrick Page — has been hooked into a harness and is swinging over the heads of the folks in the expensive seats 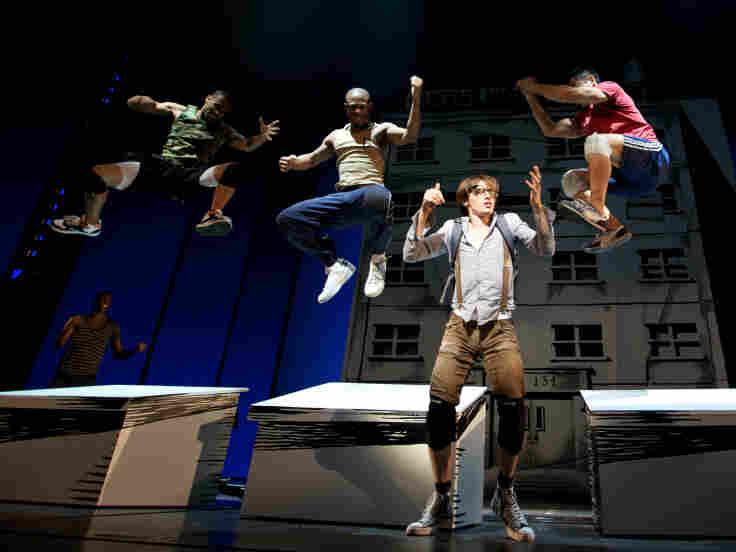 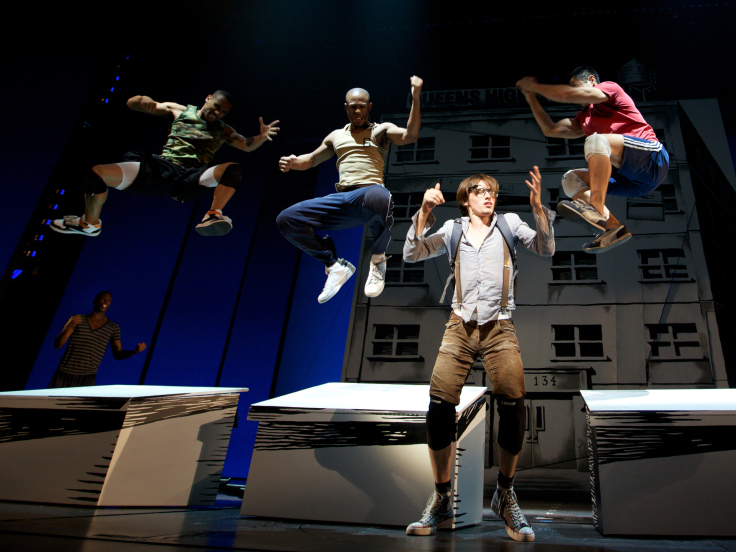 Reeve Carney (center) plays Peter Parker on Broadway and was Ferdinand in Taymor's recent film take on The Tempest.

This is not thrilling.

In fact, it's getting a little old at this point, some 80 minutes in, because Spidey (Reeve Carney, or at the performance I caught, his alternate, Matthew James Thomas) has done it a couple of times already to no particular effect. Hell, across 42nd Street, Mary Poppins is doing the floating-above-the-audience-thing in her own musical.

But this time, when Spidey joins the Green Goblin up there, director Julie Taymor has him do something he hasn't done before. To surprised "Oooohs" from the crowd, he lands in a tense crouch in the theater aisle. Spidey, suddenly, has touched down.

Now, notice, this is not a musical moment created by composer-lyricists Bono and the Edge. It has nothing to do with George Tsypin's striking but deliberately flat and comic-booky set design. It's not even about the aerial work. (Which for the most part will not set your spidey-sense to tingling.)

No, what's getting the audience worked up is a performer coming down to earth nearby. It's the thing legit theater can do that movies can't — put you close to a live actor — and suddenly you're not thinking about wires and harnesses, but about knee joints and tendons. Flying is mechanical; landing takes skill. And in live theater, when it's happening right next to you, you immediately get the difference.

The script works best when it's down-to-earth, too. Spider-Man vs. the Green Goblin? Perfectly clear. Peter Parker crazy for girlfriend Mary Jane (Jennifer Damiano)? Also clear. Spidey's relationship with great-great-great-spiritual-second-cousin Arachne (T.V. Carpio), spider-lady-creature-of-Greek-myth? Less clear, though you can sort of follow it. 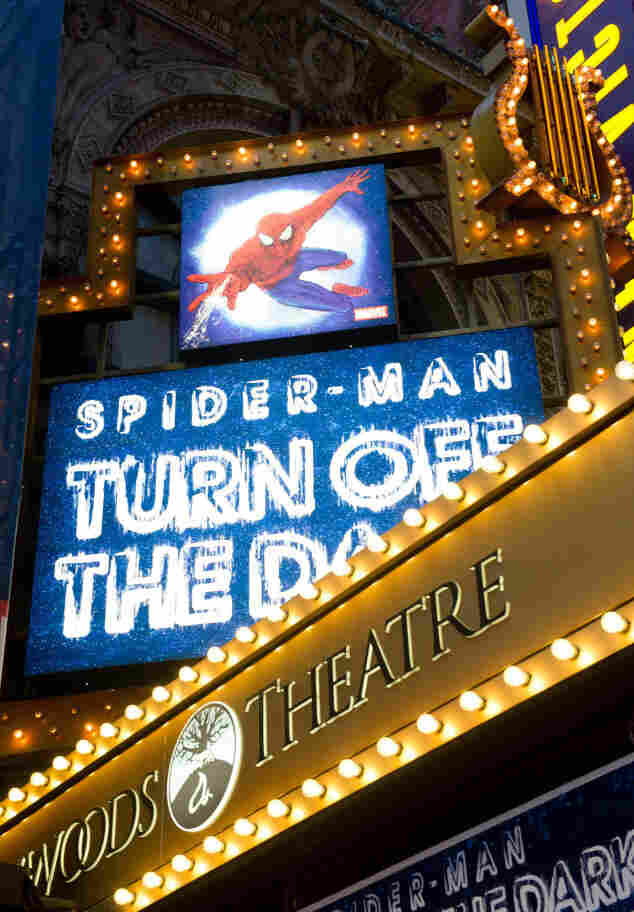 Despite bad buzz (and now a slew of terrible reviews), Spider-Man: Turn Off The Dark has become one of Broadway's highest-grossing productions since previews began in November. Charles Sykes/AP hide caption 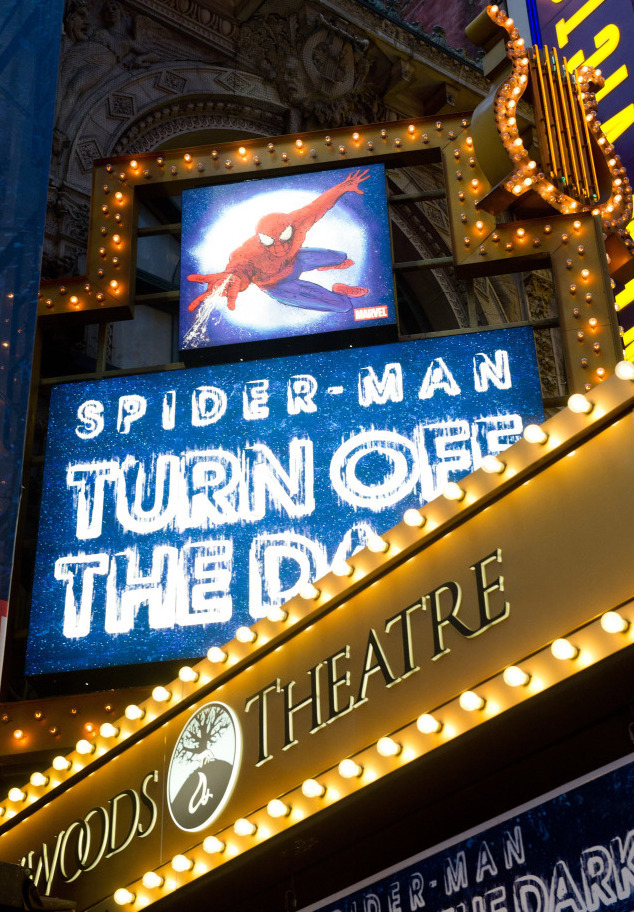 Despite bad buzz (and now a slew of terrible reviews), Spider-Man: Turn Off The Dark has become one of Broadway's highest-grossing productions since previews began in November.

I get why Taymor, who's a classical-theater buff, wants to bring in something non-comic-booky, but she's trying too hard — a Geek Chorus of four kids second-guessing plot twists? First-act playground bullies who morph into a second-act military-industrial complex? A weird fixation on bad-guy fashions and high arachnid heels? Throw all that at a web and things are bound to get tangled, even when the lyrics are clear. (Which is not to suggest that the lyrics are very often clear.)

What Spider-Man: Turn Off The Dark wants to be is a theme park — an odd, $65 million theme park where audiences get to watch other people ride the rides. Still, I caught the first performance after other critics weighed in, and — while this is hardly high praise — the show's not nearly the train wreck I'd expected. I've seen theatrical train wrecks — Annie, Too; Home Sweet Homer; the dreadful Earth Wind & Fire musical Hot Feet. Spider-Man is just a train that takes forever to get out of the station and up to speed. That, it seems to me, is fixable.

Almost three hours? C'mon, it's based on a comic book. A child could cut it: Get rid of the third and fourth choruses of every song, since they don't advance lyrically or build to climaxes. When there's a visual effect that works — say, a forced-perspective building painted on a ramp so Spidey can crawl up it — let us see it once, not five times. Yes, it was expensive to build, but each time it pops up it works less well.

Shorten the film montage in Act 2, keep the flying, and even keep the lovely, full-voiced Arachne (though she probably doesn't need quite so many costume changes). Just get the whole thing down to 85 snappy minutes.

It'll still be junk, but it'll be efficient, commercial junk, like those $40 T-shirts in the lobby. And if Taymor and company are serious about working to fix it, they've still got plenty of time before the most recent opening date they've chosen: March 15.

The Ides of March. Because that worked so well for Caesar?