Accessibility links
For Egyptians, Trust Is Key As Army Takes Lead The military leaders controlling Egypt after President Hosni Mubarak's ouster have pledged to turn over power in a matter of months. As they work with civilians toward transition to a democratically elected government, trust is key; the army has vested interests and has shown no fondness for democracy in the past. 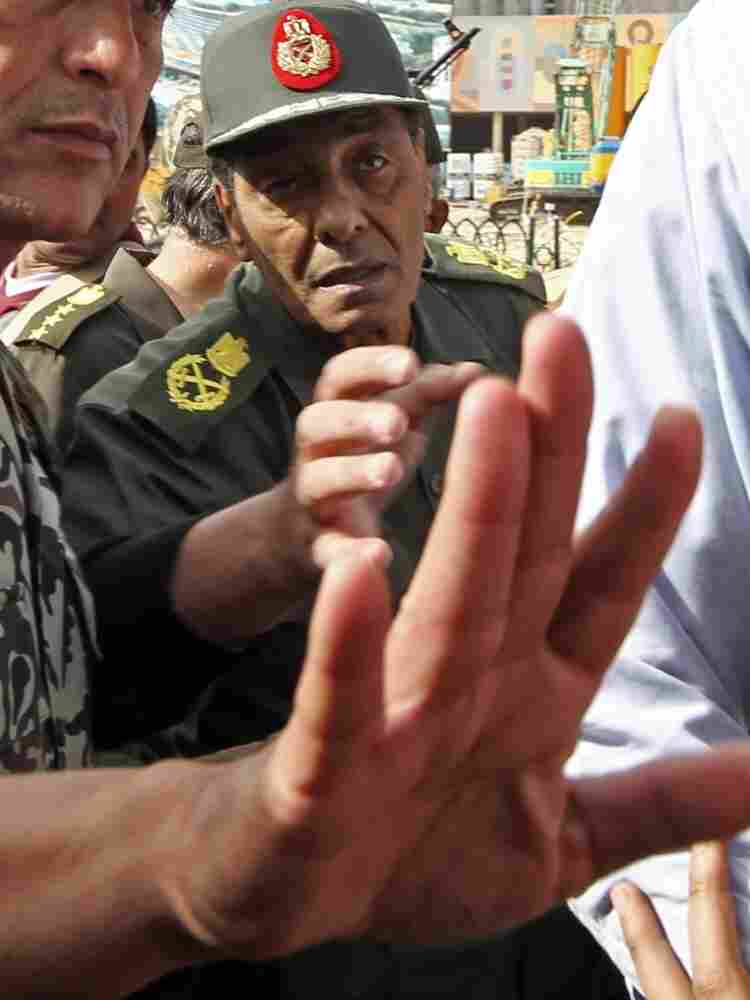 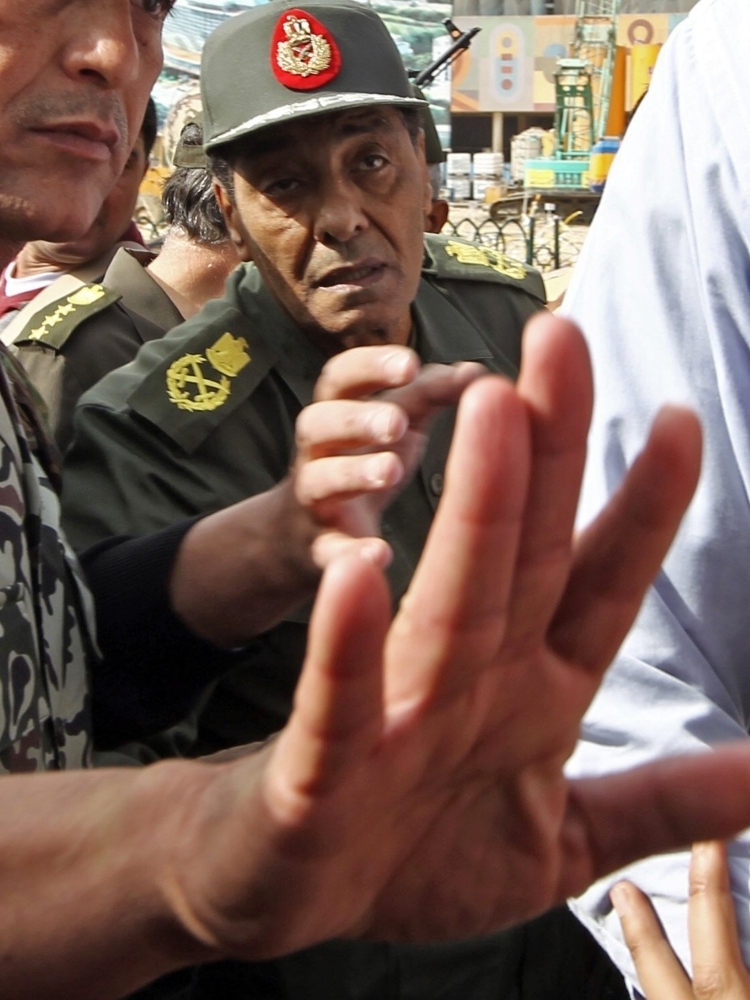 Little is publicly known about the career military men who are now in charge of Egypt after the army sided with a popular uprising and ousted autocrat Hosni Mubarak on Friday.

Over the weekend the military rulers won praise from protesters when they announced the abolition of a Parliament widely seen as illegitimate and suspended a constitution seen as little more than a convenient tool for a dictator. The army also pledged to turn over power in a matter of months to a democratically elected, civilian government.

But the army also has vested interests and in the past has shown no fondness for democracy. There are serious concerns that the military will abuse its near-absolute power, given its entrenched political and economic stakes in the country.

"During the crisis, they [the military] have been involved in arresting dissidents, some of the democracy protesters, bloggers, human-rights activists and journalists," said Peter Bouckaert, the emergencies director for Human Rights Watch.

It's likely that 76-year-old Field Marshal Mohamed Hussein Tantawi, the head of the military council now running Egypt, does not tweet, has little use for an iPad and embraces few of the social media tools that helped bring down Mubarak. A leaked U.S. diplomatic cable described Tantawi as deeply resistant to change, intolerant of intellectual freedom and singularly focused on regime stability.

Tantawi and other senior Egyptian officers, that cable said, "simply do not have the energy, inclination or world view to do anything differently." It also said junior officers mocked Tantawi as "incompetent" and "Mubarak's poodle."

"It was also said of [ex-President Anwar] Sadat that he was the poodle of [his predecessor, Gamal Abdel Nasser]," notes Egyptian analyst and historian Mahmoud Sabit.

Tantawi was shaped by his military experience in Egypt's 1956 war against Britain, France and Israel as well as the wars with Israel in 1967 and 1973. Like several of the older military leaders on the council now running the country, Tantawi was groomed in a Soviet style of military leadership before Egypt's rapprochement with the West. He is a career military man more used to monologue than political dialogue. Yet Sabit thinks the "poodle" portrait is shortsighted.

"Men within a system like that have to, to a degree, be 'yes' men," Sabit says. "But once they're their own men, it's a different story, and I think we're seeing some of that now." 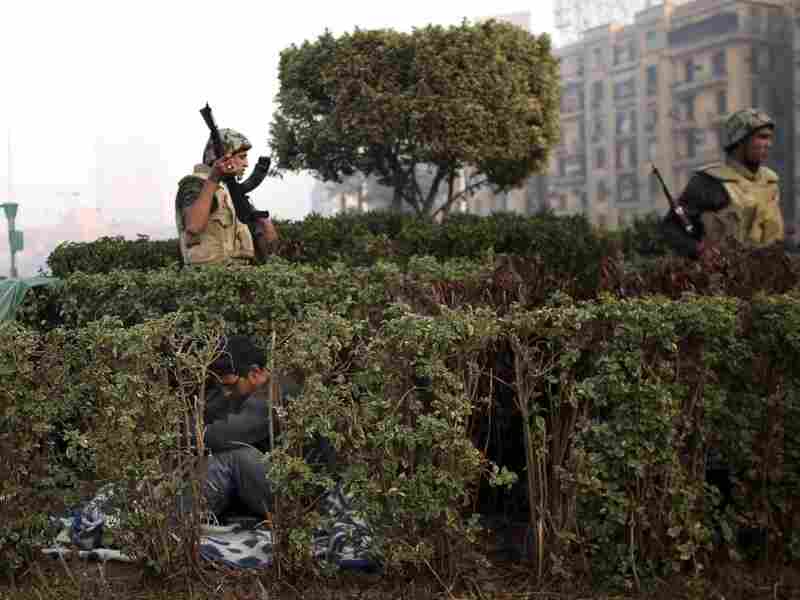 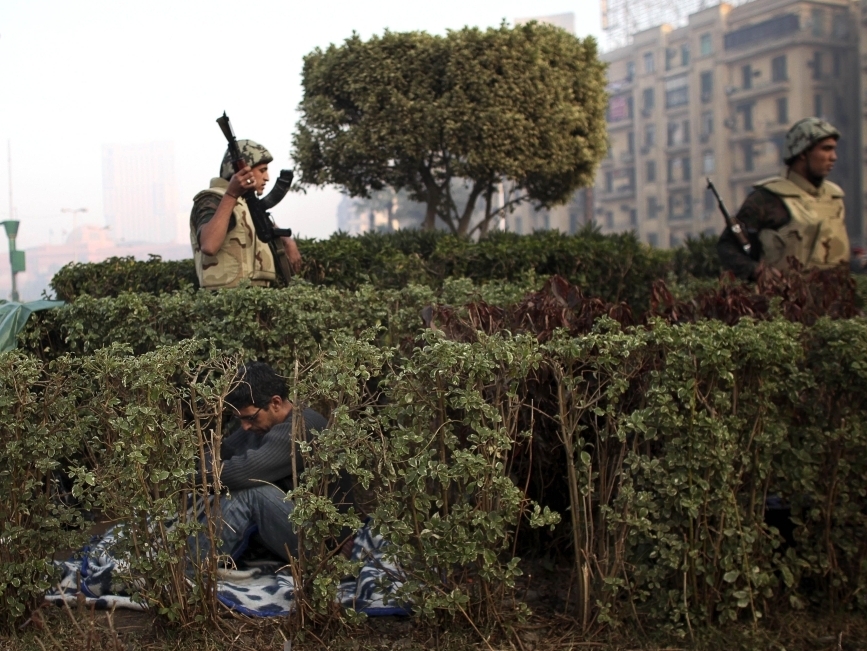 Despite a lower public profile in the past two decades, the Egyptian military is still seen as the most respected, trusted and efficient institution in the country. Because of conscription, it is also seen as representative of the nation.

Since the 1952 military coup that toppled the monarchy, all of the country's leaders have come from the military. But Mubarak worked hard to keep his commanders out of politics and out of the public light. He frequently fired generals and reshuffled their commands so no one general grew too powerful or popular.

Sabit says mixing with old warriors like Tantawi are younger generals such as Lt. Gen. Sami Anan, who has cultivated American and European military connections and training and holds a more expansive, modern worldview. When the recent protests broke out, Anan raced home from Washington, where he had been meeting with senior Pentagon officials.

Analysts say the military group now running Egypt has shown pragmatic flexibility and smarts so far during this unprecedented crisis.

"They want a straightforward transition," Sabit says. "Whatever works, I think they'll go along with. It's a learning curve for them, which I think they're prepared to take."

Today there are few viable political parties to negotiate with, so there is no real option other than face-to-face dialogue with the youth movement, despite enormous cultural, generational and political gaps.

Yet just a few days into military rule, some protest leaders say they are impressed by the speed and skill with which the Supreme Council of the Armed Forces has reached out to try to reassure Egypt and the world that it doesn't want the job permanently.

"We were a bit skeptical before. Part of the military is part of the old regime as well," says Egyptian Sally Moore, who helped organize the protests that brought down the regime. "But I think the army so far they have shown that they are on our side. So I'm starting to trust in them."

And trust will be the key as the two sides cautiously work toward a democratic transition. Some opposition figures have criticized the military for issuing information bulletins, or "communiques" as the army calls them, through a spokesman on Egyptian state TV rather than through a more open, transparent process.

But others see it as important that Tantawi is not stepping into the limelight despite being chairman of the council.

"It's all of them, really, and I think they want to keep it that way so as not to give the impression that they're grooming someone to be a military strongman," Sabit says.

Egypt receives more than $1.3 billion in annual U.S. aid, much of it earmarked for the military. But receiving less attention and scrutiny is the fact that the Egyptian military has an enormous stake in the national economy. Inspired in part by their Soviet military mentors, the Egyptian army under former President Nasser developed the idea of strategic self-sufficiency. The idea was for the military to supply, feed and arm itself.

But in the post-Cold War era, that idea has morphed into a financial free-for-all that has seen the military invest in lucrative businesses far beyond bullets and bread. The military now owns fertilizer and chemical plants, vast real estate holdings, road construction firms, factories that make home appliances, clothing and much more. "They have wide-ranging economic interests from bottled water, raising cattle, construction — things far removed from any sort of military industries," notes Egypt expert Michael Hanna with the New York-based Century Foundation.

While protest leaders might want to eventually bring civilian oversight or free-market reforms to the Egyptian military's multibillion-dollar empire, Hanna notes that they are also practical.

"It's something of a quid pro quo, I would imagine," Hanna says. "You're not going to be able to bring the military along if you're also asking them to forfeit their economic interests. That's a difficult bargain to imagine being struck."

Skepticism abounds about the Egyptian military's sincerity as the country heads into this precarious transition after decades of dictatorship. In 1952, the army promised democratic change and instead ushered in six decades of military rule in civilian garb.

But during 18 days of street rage that ended Friday, the military came up against something its field manuals never prepared it for: a confrontation with a moral force expressing the will of the people.