Accessibility links
D.C., Long 'Chocolate City,' Becoming More Diverse The nation's capital earned the nickname because of its longtime majority black status. But now Washington is defying trends seen in many other large U.S. cities and becoming whiter. Some people point to housing costs and cost of living as the reasons for the shift. 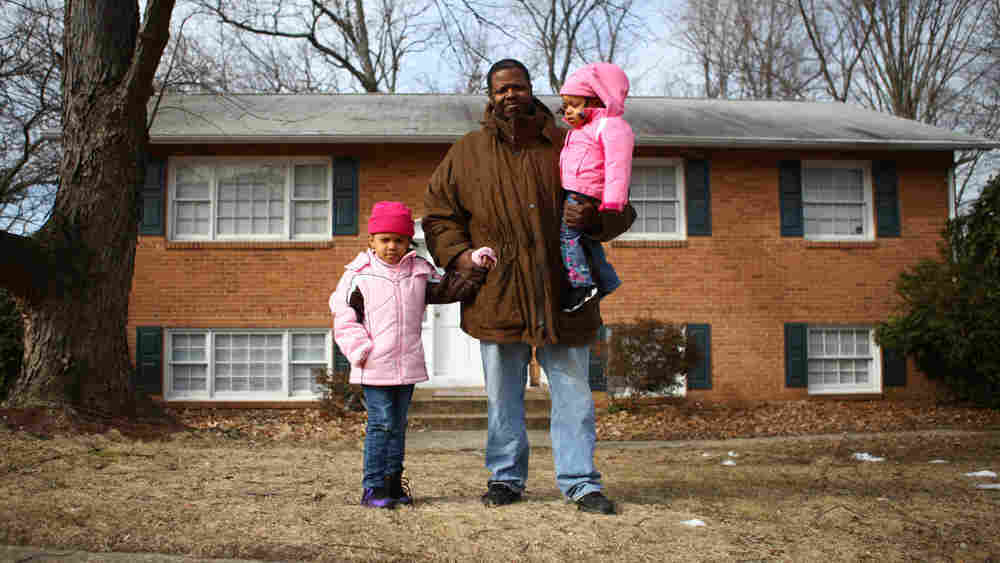 Robert Adams carries his daughter Layla, 2, and walks with Lucy, 4, in front of their home in District Heights, Md. Adams grew up near the Anacostia Historic District of Washington, D.C., but couldn't afford to buy a home there for his family. He now lives in this suburb, a few miles away from his mother and grandmother, who still live in the house where he grew up. Coburn Dukehart/NPR hide caption 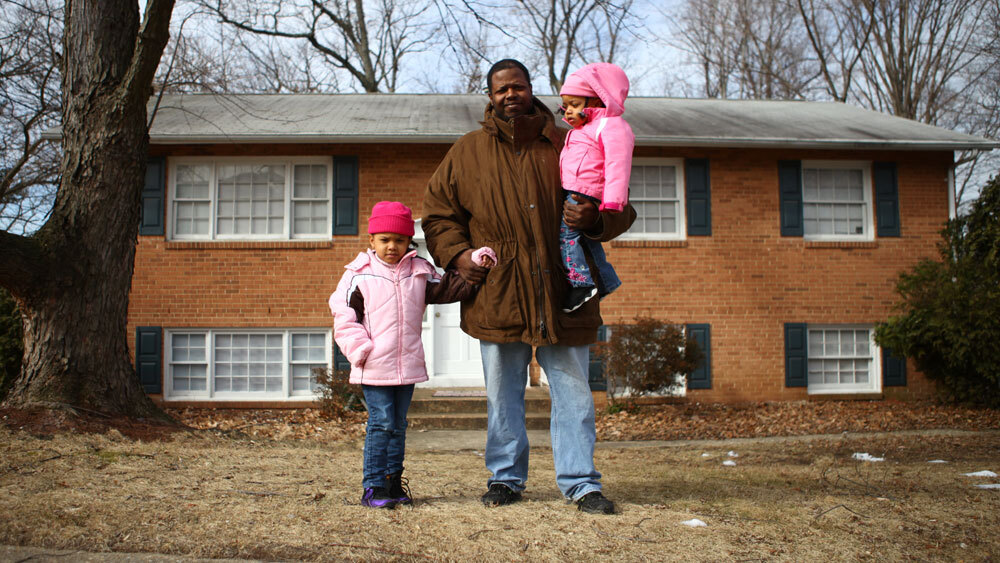 Robert Adams carries his daughter Layla, 2, and walks with Lucy, 4, in front of their home in District Heights, Md. Adams grew up near the Anacostia Historic District of Washington, D.C., but couldn't afford to buy a home there for his family. He now lives in this suburb, a few miles away from his mother and grandmother, who still live in the house where he grew up.

For decades Washington, D.C., was known affectionately as "Chocolate City" to many black Americans, because it was predominantly African-American.

Most big U.S. cities are getting browner as more blacks, Hispanics and Asians move in. Washington, by contrast, fell to just 53 percent black in 2009, down from a peak of 71 percent in 1970. That's partly because D.C. has quickly become one of the most expensive cities in America, and one of the only cities in the U.S. where property values continue to rise despite the economic downturn.

The change is a long time coming, but new Census data expected in the coming weeks will likely show a further drop in the District's black population, despite its multigenerational roots here. In fact, demographers predict that if current trends continue, the city could lose its majority-black status in the next few years.

In 1950, Washington's white population began a steep decline. But the number of white residents has risen since 2000. hide caption

In 2006, Adams moved out of his mother's home, which was just blocks from the Anacostia Historic District, a traditionally poor and working class neighborhood east of the Anacostia River in Washington, D.C. He left for a more affordable suburb in Maryland.

It was the type of move that would have been unimaginable only a decade ago.

Adams still feels a tinge of regret. During the 1990s, he was an elected official in Washington who fought to bring more retailers and a Metro stop to his neighborhood.

The father of two young daughters is a delivery truck driver who makes less than $50,000 a year. So, he says, he ultimately couldn't afford to take advantage of some of those improvements he helped bring into being.

"That's, I guess, where a little bit of my bitterness comes from. Because I was on the front lines working to try to make the neighborhood better," he says. "Not to say I couldn't afford it, but I couldn't get what I could get in Maryland for the [same] money."

Adams' grandparents moved to the District from small-town Virginia in the 1940s, part of a wave of blacks who left the South in search of opportunity in the early 20th century. He was born just after the largest white exodus from Washington in history. That wave of departures came after the riots that followed the assassination of Martin Luther King Jr. in April 1968.

But in recent years, even areas like Anacostia — a community that was virtually all-black and more often than not poor — have seen dramatic increases in property values. The median sales price of a home east of the river — for years a no-go zone for whites and many blacks — was just under $300,000 in 2009, two to three times what it was in the mid-'90s. That still makes it the least expensive part of town, but noteworthy for dramatic change despite still being regarded as unsafe by many west of the Anacostia River. 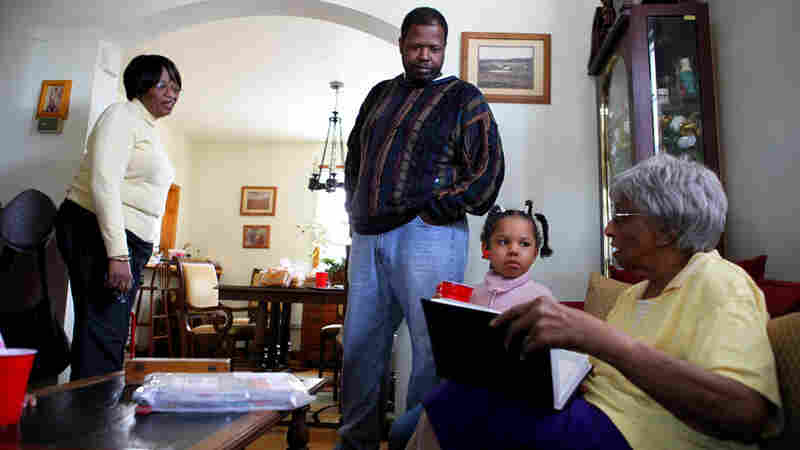 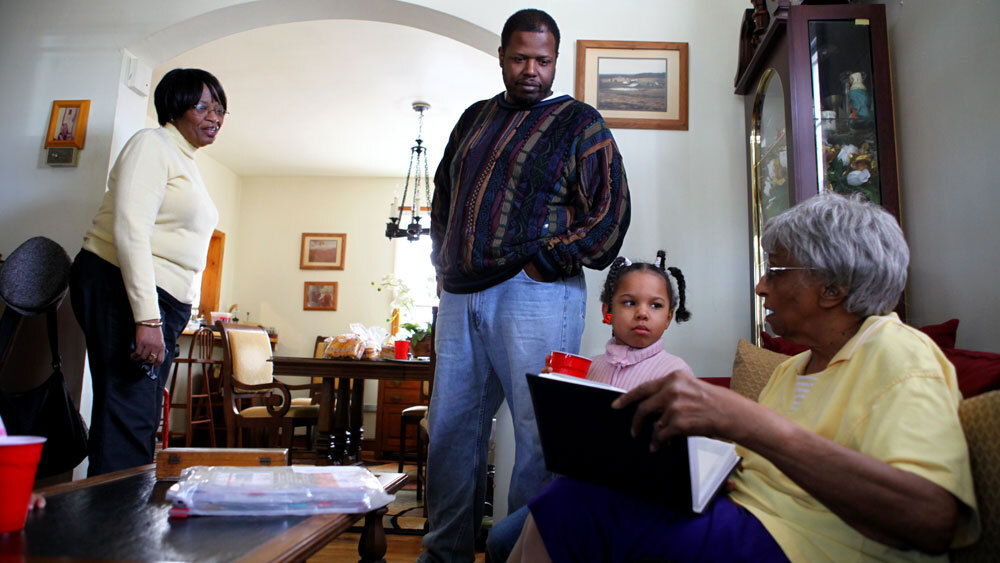 Adams says that before moving, he looked at a two-bedroom house around the corner from his mother's home priced at $285,000. But it had no refrigerator or washing machine, so in 2006, he settled on a five-bedroom home for slightly more in District Heights, Md., a working-class suburb in Prince George's County.

He rarely goes back to his old neighborhood, but each time he does he sees something new — on a recent ride down Martin Luther King Jr. Avenue, a main thoroughfare in Southeast D.C., he was shocked to see a six-story Salvation Army building with a modern design made of brick and gleaming glass.

"I didn't even know that building was there," he admits.

New developments dot a landscape once dominated by boarded-up homes and Section 8 housing. White residents have started to trickle in as well.

New To The Neighborhood

David Garber, 27, owns one home in Anacostia and is about to buy two more that are now boarded up. Garber, who is white, says people were happy when he moved to the neighborhood several years ago, because he rehabbed a home that was a haven for drug dealers and addicts.

He left the neighborhood after a 2009 incident where 15 friends were robbed at gunpoint at a Christmas party at his home. He insists that wasn't the primary reason he moved, and he refuses to say the area is less safe than other parts of town — even though its violent crime rate is the highest in the city. He also insists the neighborhood is still affordable to anyone and everyone who wants to live there.

"Right now prices are really low in Anacostia," he says.

Adams' reply: Low according to whom?

Many newcomers like Garber who move east of the river don't want to see people like Adams forced out. They see themselves as trailblazers fighting to preserve the integrity of historic Anacostia and its surrounds.

Stan Voudrie is one of those newcomers — a white developer who has been snatching up property in historic Anacostia, an area designated for preservation, including six square blocks he bought with business partners.

Standing in front of the just-opened Uniontown Bar & Grill – the first such bar this part of town has seen in as long as anyone can remember — he bristles at even the mention of "gentrification." It's a buzzword people around here don't take kindly to, he says.

Voudrie does admit that whatever you call it, everything east of the Anacostia River is changing not just racially but socioeconomically.

'I Told You They Was Coming Back'

Adams, who drives his delivery truck to various grocery stores overnight five times a week, says these changes are even more obvious to longtime residents. His mother Hattie, 63, and grandmother Lucy Stith, 90, still live on his old block and joke about how whites are finally coming back, 40 years after largely deserting the area.

"Before I moved out I can tell you when the first family — the first white family — moved back. "It was like a buzz, like 'I told you they was coming back.' " 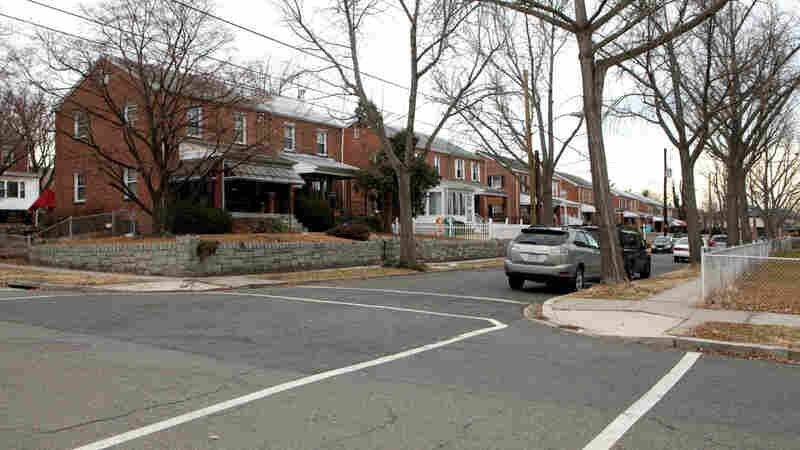 The block where Adams grew up. During the 1990s, Adams fought to bring new retailers and other improvements to the area. Coburn Dukehart/NPR hide caption

Adams says he likes diversity, and wants to see it, "but at what expense?"

If it means people like him can't afford to stay in their old neighborhood, that bothers him, he says. In Prince Georges County, where he lives now, the black population has grown 11 percent in the last decade.

Even some newcomers to historic Anacostia wonder what the District will look like in 5 or 10 years. Home values are already well over half a million dollars in most other parts of the nation's capital.

Charles Wilson, a black lawyer who works for an accounting and consulting firm, went to high school in the Maryland suburbs but bought a home in D.C. in August 2006, just before prices peaked. He's now an elected official active in a number of neighborhood associations.

"Yeah I'm concerned, long term I'm wondering where will my place be within the city," Wilson says. "I'm wondering what the D.C. of tomorrow will look like, and whether I'll still have a seat at the table."