Accessibility links
Muslim Brotherhood: Wild Card In Egypt Power Game The nation's oldest and most organized opposition group, long banned by the Mubarak government, inspires loyalty among some, fear among others. But throughout the anti-Mubarak uprising, the Brotherhood moved gingerly, trying to establish itself as a centrist force. 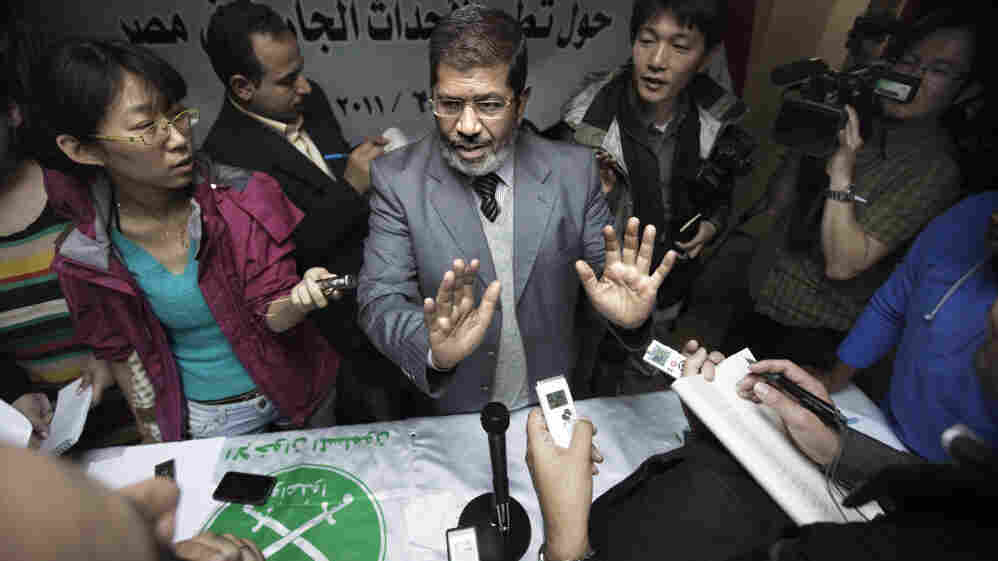 The Muslim Brotherhood is Egypt's oldest and most organized opposition group. It also was banned under President Hosni Mubarak, who stepped down last week.

What role the Brotherhood will play in the Egypt of the future worries some in the United States, Israel and other countries. They fear the group will do in Egypt what the Shiite clerics did in Iran after protesters ousted the late shah: Turn Egypt into an Islamist state and an enemy of Israel.

But many in Egypt dismiss such concerns as fear-mongering.

Strategic Use Of Power

The Brotherhood's power was evident in the northern port city of Alexandria earlier this month.

The group's leaders called on thousands of supporters to pour into the streets day after day to keep up pressure on the Mubarak regime.

Egyptian security officials were worried enough to round up people with ties to the Brotherhood the week before. Among those arrested was Sobhi Saleh of Alexandria, a former lawmaker who headed a parliamentary bloc aligned with the banned movement.

What Is The Muslim Brotherhood?

Supporters freed Saleh from prison and he soon was out protesting again.

Saleh calls the Brotherhood the most powerful force among the Egyptian people. But he and other leaders hasten to add that they will make no grab for power in a post-Mubarak Egypt.

A Reach That's Deep, And Wide

Whether those statements are true or not, the Brotherhood can't be ignored. It claims 600,000 members, and even as a banned movement, it managed to win one of every five seats in Parliament during the 2005 elections.

Mubarak has used the group's sometimes violent past to justify a stifling state-of-emergency law that has been in place for 30 years.

But many analysts describe the Brotherhood as a moderate Islamic political and social movement that is fiercely nationalistic and engages in philanthropy. It appeals largely to Egypt's urban professionals and the middle class.

Many of the group's leaders are well-educated — physicians and pharmacists and engineers.

Khaled Fahmy is chairman of the history department of the American University in Cairo. He and other Egyptians interviewed for this story believe the Brotherhood has as much right as anyone to help shape their country's future, as long as it doesn't try to take over.

Brotherhood officials say they have no such plans.

At a news conference last week, spokesman Mohammed Mursi said the Brotherhood will not run a presidential candidate in any upcoming elections and wants nothing more than to "collaborate" in creating a new Egypt.

And while Brotherhood supporters joined the protests, the group took no leadership role in the uprising that swept Mubarak from power.

The Power Of A Passive Approach

"They are trying to position themselves as a centrist mainstream force as opposed to a radical and militant force," Gerges says, adding that the Brotherhood is also eager to avoid provoking Egypt's military government into a crackdown.

"They realize if they mobilize their followers, if they try to go unilateral," Gerges says, "they might end up with the Algerian model of the 1990s, when the Islamists won an outright victory and that particular victory led to a civil war between Islamists on one hand and the Algerian army."

That doesn't mean the Brotherhood will give up its quest for a more Islamic Egypt, says historian Khaled Fahmy.

"They are a very important player, and again, as long as they agree on the principle of equality and the principle of the rule of law, I think they should be included in the political discussion of the future of Egypt," Fahmy says.

But blogger Gigi Ibrahim, who is part of the youth movement that helped bring down Mubarak, is more skeptical.

"They have been created to scare us from democracy," Ibrahim says. "And now that we have democracy, it will be interesting [to see] who they really are."