Accessibility links
FBI Faulted For Overstating Science In Anthrax Case The FBI and Justice Department overstated the certainty of the scientific evidence used to prove that Bruce Ivins carried out the anthrax mailings that killed five people in 2001, according to an independent panel of scientists. The panel limited its findings to the science and did not "assess the guilt or innocence of anyone" tied to the case. 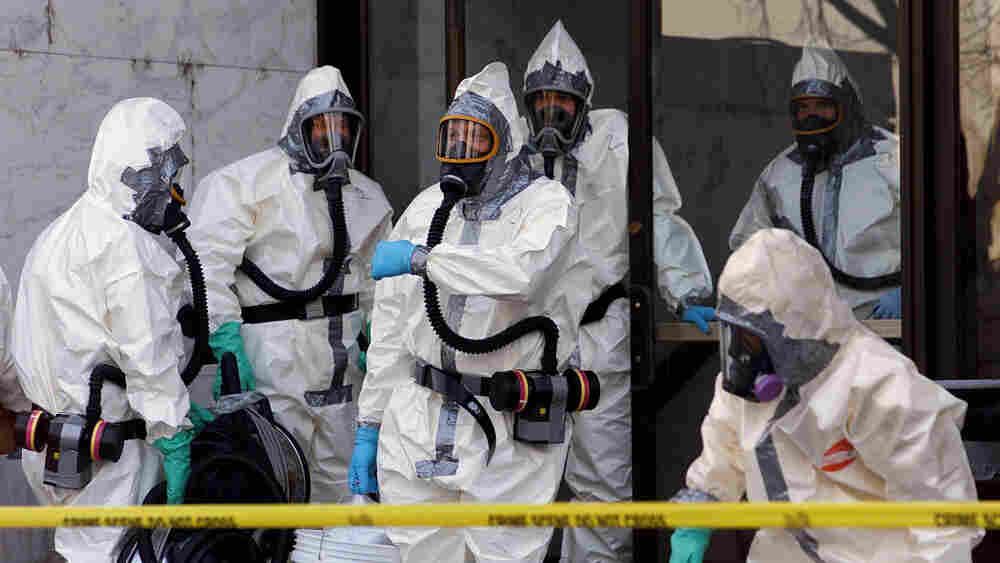 Hazardous materials experts enter the Hart Building of the U.S. Senate on Nov. 7, 2001, in Washington. The building was closed after an anthrax-laced letter was found in then-Sen. Tom Daschle's office. Stephen Jaffe/AFP/Getty Images hide caption

The scientific evidence alone is not enough to prove that microbiologist Bruce Ivins was the perpetrator of the anthrax attacks that killed five people in 2001, according to an independent review panel.

How The Anthrax Terror Unfolded

The panel of scientists was convened by the National Research Council of the National Academies to review the science that the FBI used in its investigation into the attacks.

Starting a week after the attacks of Sept. 11, 2001, letters containing anthrax bacterial spores were mailed to NBC News and the New York Post. Letters were also sent to the offices of then-Sen. Tom Daschle and Sen. Patrick Leahy.

After the attacks, the FBI created the "Amerithrax Task Force" to conduct an investigation that the FBI has called "one of the largest and most complex in the history of law enforcement."

Key Findings From The Report

During the next seven years, the task force expended more than 600,000 investigator work hours, interviewing thousands of witnesses on six continents and evaluating a mountain of evidence. In the end, however, the agency's case against Ivins was largely circumstantial.

Ivins killed himself in July 2008, just as the Justice Department was about to formally indict him.

Before his death, Ivins was a microbiologist and researcher at the U.S. Army Medical Research Institute of Infectious Diseases, the federal facility that develops countermeasures for potential biological weapons agents.

The evidence gathered against him confirms that there were anthrax spores in Ivins' laboratory, and Ivins made a series of unusual, after-hours visits to his lab just before the attacks occurred. But no one reported seeing him mail the letters; no one said they saw him prepare the anthrax spores found in the letters; and no one could provide a clear motive for why he would carry out such an attack.

The FBI and Justice Department have maintained that a scientific analysis of the particular batch of anthrax spores found in the letters and the spores found in a flask in Ivins' lab showed that they were identical.

But after carefully reviewing the evidence, the committee of independent scientists convened by the National Research Council concluded that it was not possible to rule out other sources for the anthrax.

"Although the scientific evidence was supportive of a link between the letters and that flask, it did not definitively demonstrate such a relationship, for a number of reasons," said Dr. David Relman, a bioterrorism expert at Stanford University School of Medicine who served as vice chair of the review committee. "Our overarching finding was that it is not possible to reach a definitive conclusion about the origins of the B. anthracis in the mailings based on the available scientific evidence alone."

The expert panel also disputed the FBI's claim that Ivins was the only person with the specialized knowledge needed to prepare the spores that were used in the attack.

The committee was not asked, and did not attempt to determine, whether Ivins was indeed the perpetrator of the attacks. As the National Academies' website notes, "The new report is limited to an evaluation of the scientific evidence and does not assess the guilt or innocence of anyone connected to the case."

In a written response to the findings, the FBI and Justice Department said, "The FBI has long maintained that while science played a significant role, it was the totality of the investigative process that determined the outcome of the anthrax case."