Accessibility links
Timeline: How The Anthrax Terror Unfolded Seven days after the terrorist attacks of Sept. 11, 2001 attacks, anonymous letters laced with deadly anthrax spores began arriving at media companies and congressional offices. Here, a chronology of who was infected and the FBI's pursuit of the attacker.

Timeline: How The Anthrax Terror Unfolded

Timeline: How The Anthrax Terror Unfolded 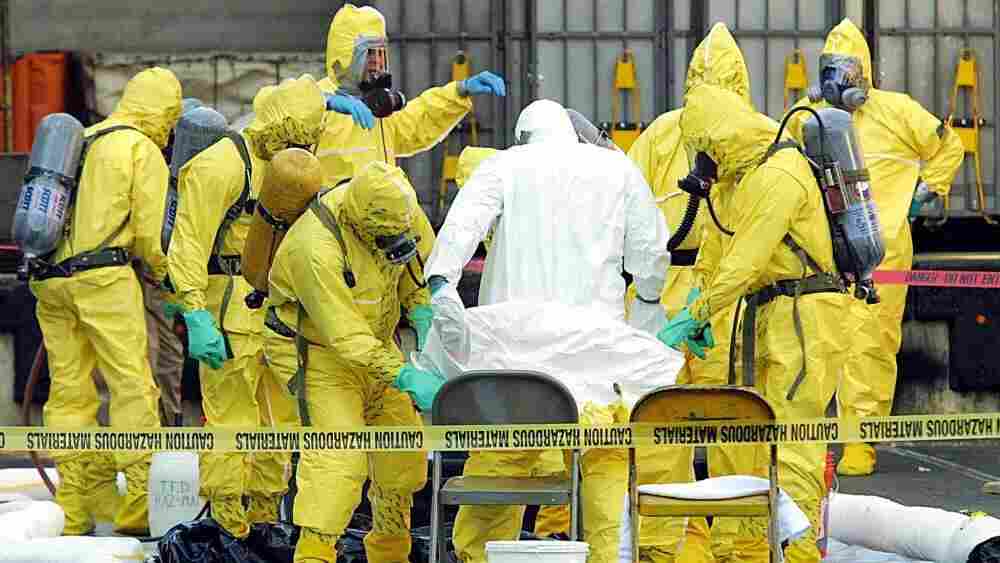 Members of a hazardous materials response team help to remove a hazardous materials suit from an investigator who had emerged from the U.S. Post Office in West Trenton, N.J., on Oct. 25, 2001. The post office was closed after two letters containing anthrax were traced back to this facility. Tom Mihalek/AFP/Getty Images hide caption

Seven days after the terrorist attacks of Sept. 11, 2001, anonymous letters laced with deadly anthrax spores began arriving at media companies and congressional offices. Over the ensuing months, five people died from inhaling anthrax and 17 others were infected after exposure. Here's a timeline of who was infected and the FBI's investigation:

Sept. 11, 2001: Terrorists hijack four airline jets and crash them into the World Trade Center towers in New York City, the Pentagon in Virginia and a field in rural Somerset County, Pa. 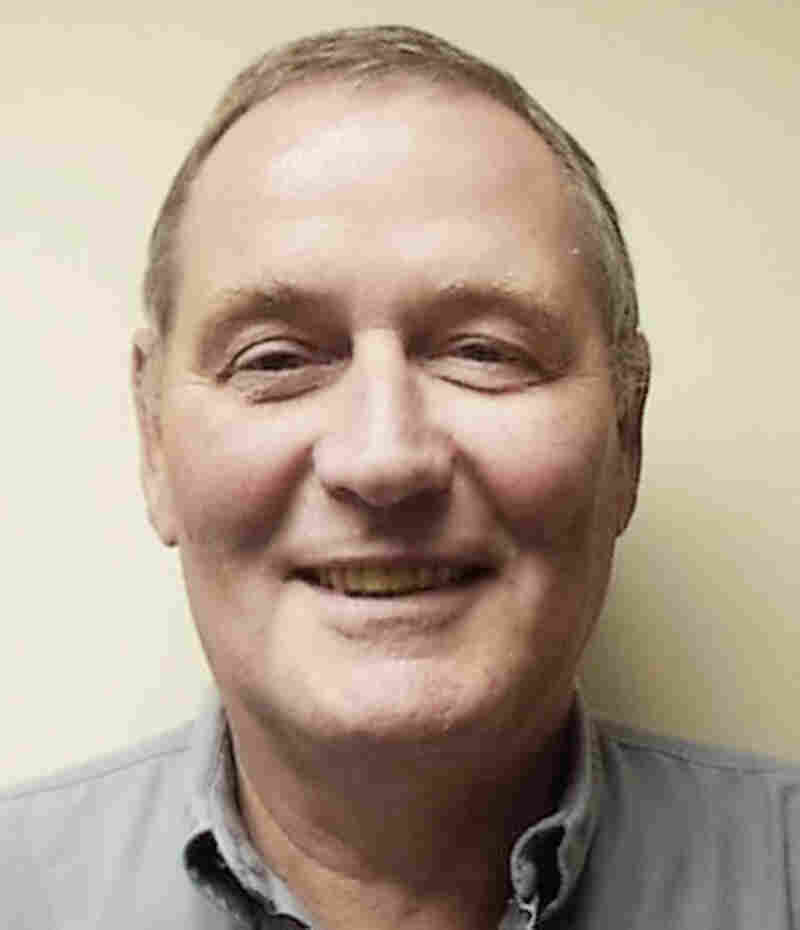 Bob Stevens died Oct. 5, 2001, after he failed to respond to antibiotics for an inhaled form of anthrax. AP hide caption 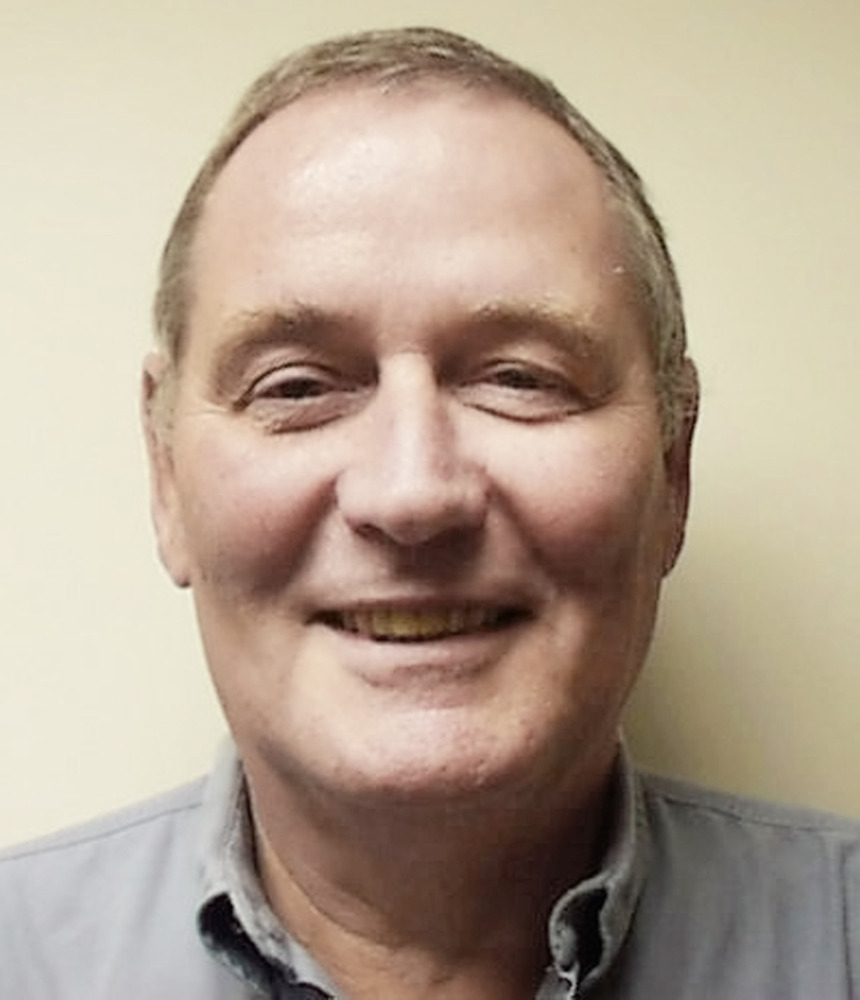 Bob Stevens died Oct. 5, 2001, after he failed to respond to antibiotics for an inhaled form of anthrax.

Oct. 4, 2001: Bob Stevens of American Media in Florida is hospitalized with inhalation anthrax.

Oct. 8, 2001: Anthrax is found in the Boca Raton, Fla., offices of American Media, publisher of the National Enquirer. The building is closed.

Oct. 9, 2001: More letters laced with anthrax are posted, and the FBI begins investigating the incidents.

Oct. 16, 2001: The 7-month-old son of an ABC News freelance producer tests positive for anthrax poisoning. The baby developed a rash soon after visiting the network's Manhattan offices on Sept. 28. 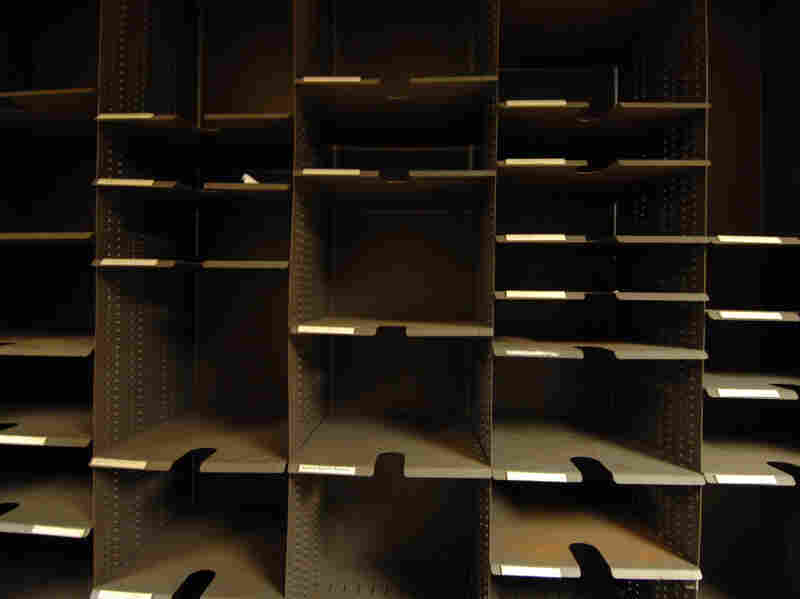 The American Media Inc. building was quarantined for more than five years because of anthrax infection, and was cleared by federal health officials to reopen in 2007. Steve Mitchell/AP hide caption 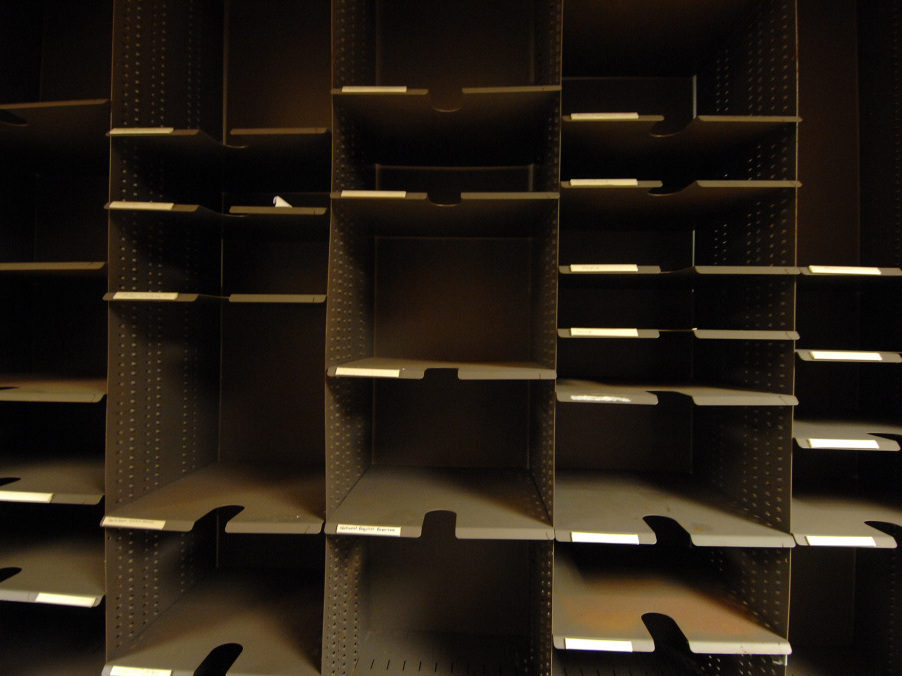 The American Media Inc. building was quarantined for more than five years because of anthrax infection, and was cleared by federal health officials to reopen in 2007.

Oct. 23, 2001: Two postal workers from the Brentwood facility in Washington, D.C., are confirmed to have died from inhalation anthrax.

June 25, 2002: FBI agents search the residence of Steven Hatfill, a scientist who worked in the government's biodefense labs at Fort Detrick, Md. 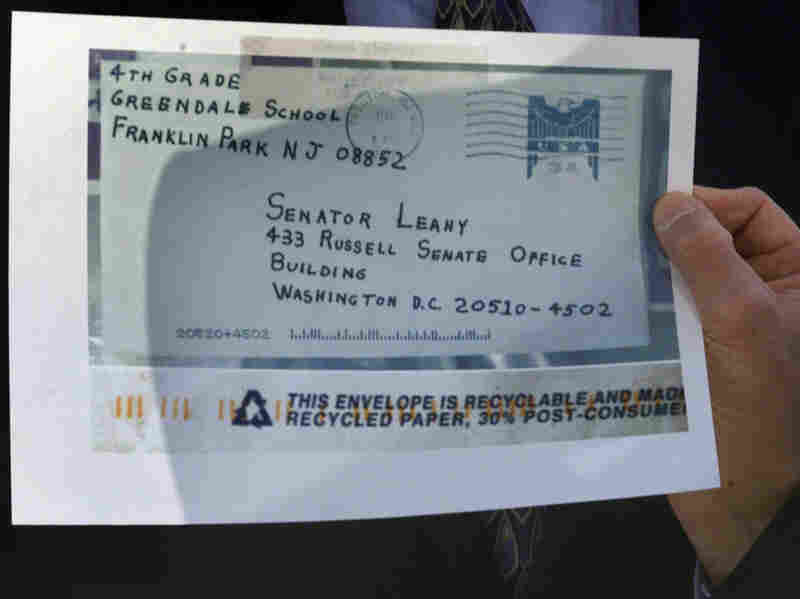 The Justice Department released photos on Oct. 16, 2001, of envelopes that contained anthrax, including this one sent to Sen. Leahy Rick Bowmer/AP hide caption 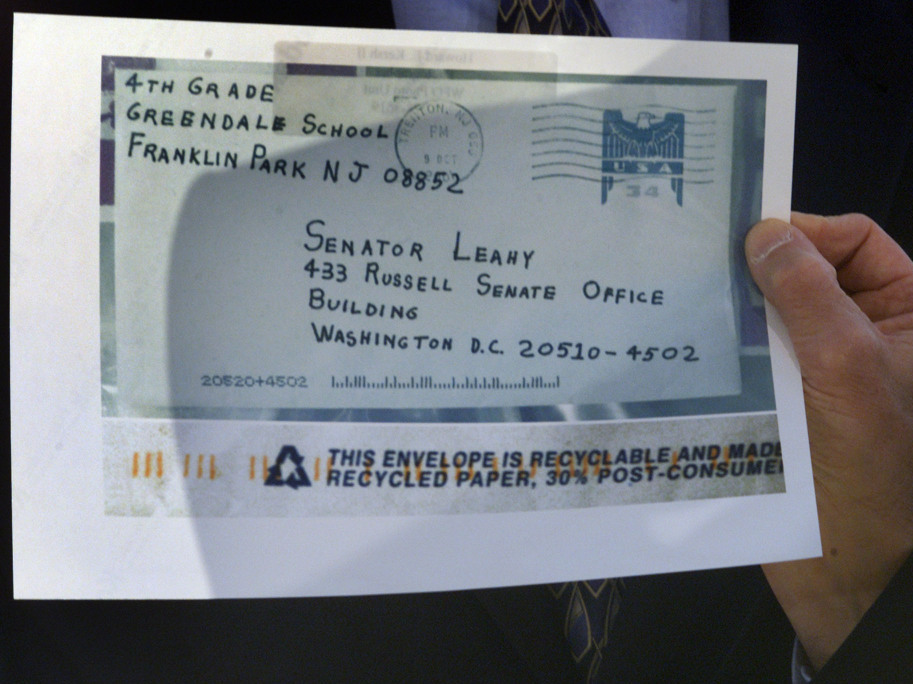 The Justice Department released photos on Oct. 16, 2001, of envelopes that contained anthrax, including this one sent to Sen. Leahy

Aug. 2002: Hatfill is named a "person of interest" by law enforcement officials.

Dec. 2003: The Brentwood postal facility reopens in Washington, D.C., after more than $130 million worth of renovation and cleanup.

July 13, 2004: The New York Times is sued by Hatfill for defamation. He also sues the Justice Department.

June 27, 2008: Hatfill receives a $5.8 million settlement in his suit against the government.

Sept. 17, 2008: FBI Director Robert Mueller tells the Senate Judiciary Committee that the FBI will seek an independent review of the scientific evidence of the anthrax case "because of the importance of the science to this particular case and perhaps cases in the future." 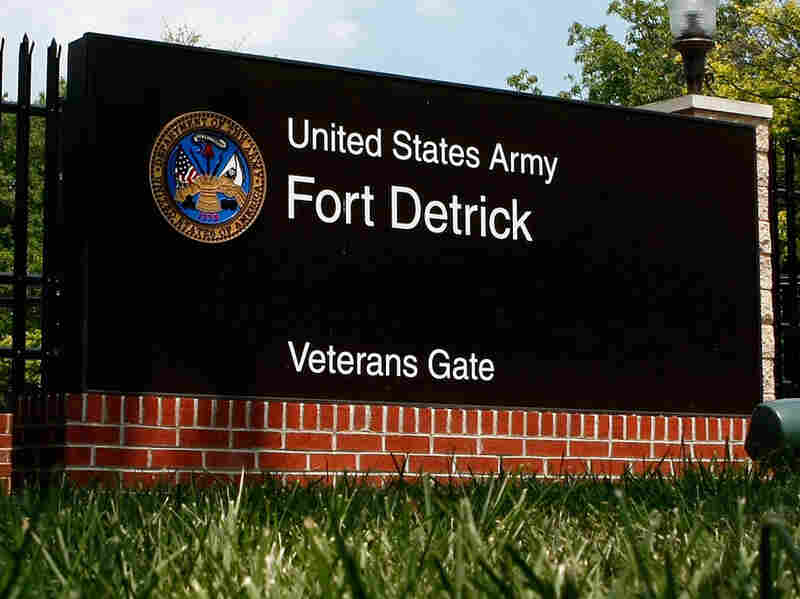 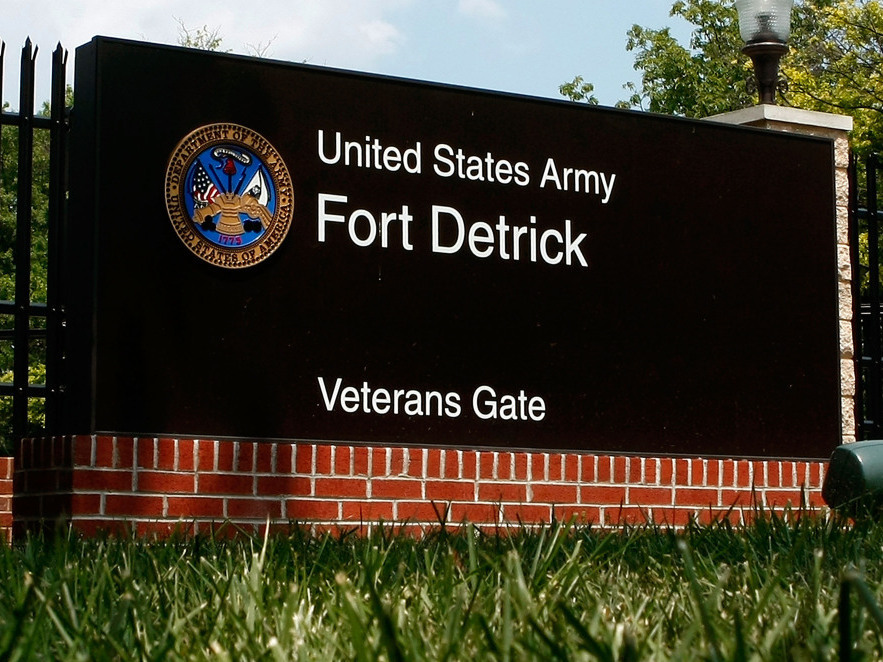 Feb. 19, 2010: The FBI, Department of Justice, and the U.S. Postal Inspection Service formally conclude their investigations of the anthrax mailings. According to the DOJ report: "Evidence developed from [the] investigation established that Dr. [Bruce] Ivins, alone, mailed the anthrax letters."

Feb. 15, 2011: A group of independent scientists convened by the National Academies of Sciences releases a review of the science used in the FBI investigation. The panel concludes that scientific evidence is consistent with the idea that Bruce Ivins could have been the perpetrator of the anthrax attacks that killed five people in 2001. But taken on its own, the science doesn't prove Ivins did it, the panel says. The new report is limited to an evaluation of the scientific evidence and does not assess the guilt or innocence of anyone connected to the case.

The Minneapolis Star Tribune, CNN and wire services contributed to this report.