Accessibility links
History Hinders Diversification Of Portland, Oregon Although the city is slowly growing more diverse, it still remains one of the most homogeneous big cities in the U.S. Many of the residents are young, white professionals, most of whom are not from there. What has helped keep Portland majority white? Its whiteness. 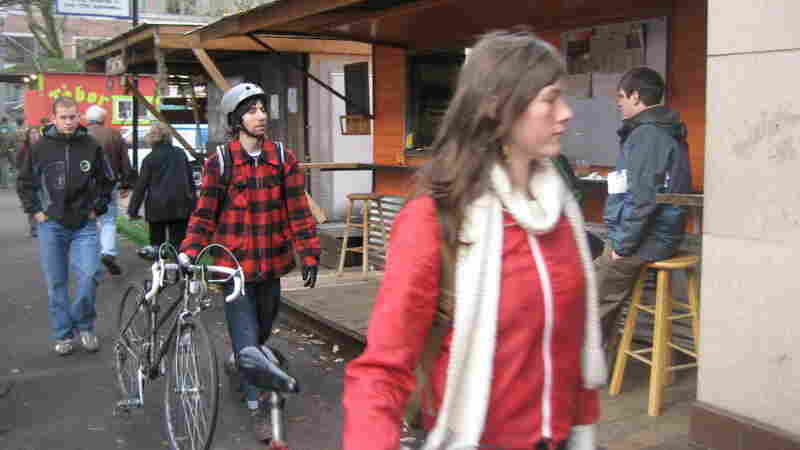 Economists say unemployment is high in Portland and wages are low. But the city is still attracting young, white professionals from the Northeast and Midwest. Amelia Templeton/NPR hide caption 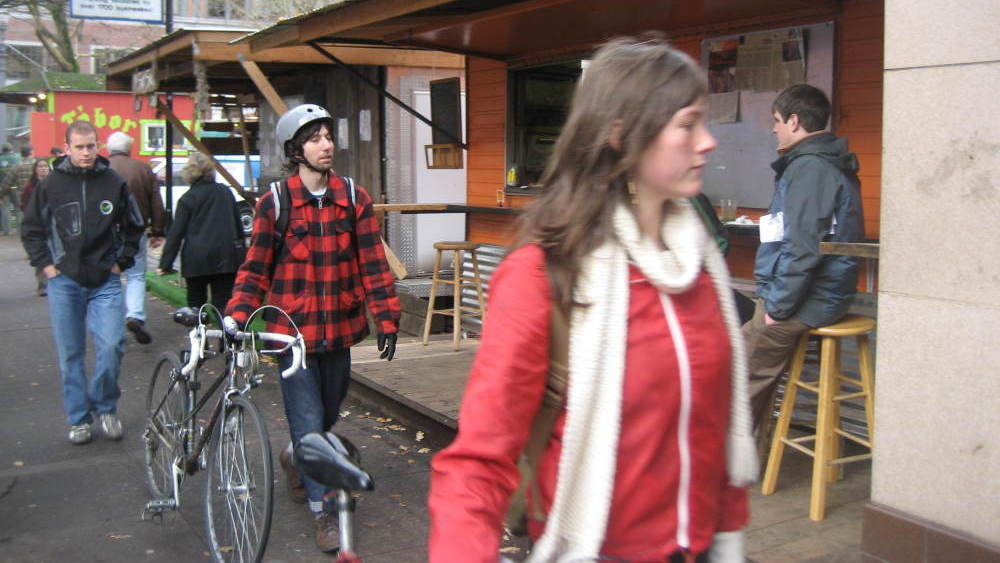 Economists say unemployment is high in Portland and wages are low. But the city is still attracting young, white professionals from the Northeast and Midwest.

Oregon is one of only a dozen states where the majority of its residents aren't from there. Each year thousands of 20-somethings move to Portland.

The city's entire population is growing, but Portland is still about 80 percent white, making it one of the most homogeneous metropolitan cities in the country.

Many of the migrants don't have jobs, kids or a mortgage. So why do they keep coming?

'A Mecca For The Misplaced'

You can get everything from pad thai to a fried pie in one of the hundreds of food carts that have taken over empty parking lots downtown.

At one cart, Jonathon Balderi is handing a customer a cheeseburger. Balderi is 28, and like a lot of young people here, he came to Portland to get away from somewhere else.

A snapshot of Portland, Ore.'s population over nearly 40 years shows that while overall the population has grown, the majority of its residents remain white.

"My ex-girlfriend decided she wanted to go to art school here and I wanted to leave Pennsylvania," he said.

Behind Balderi, Quentin Gardiner is huddled over the grill in the food cart.

Gardiner says he had to get out of Binghamton, N.Y. He says all he knew about Portland was that it had a great heavy metal rock scene. However, he's found a lot of people like himself here.

"This seems to be a mecca for the misplaced half-cast rock-and-rollers," Gardiner says. "A lot of half-rican, halfie, half-black, half-white rockers out here and metal heads and punk rockers. I like that a lot. It seems to be that I chose the correct place to come if this is where we're all flocking to."

Portland has scooped up 20-somethings from shrinking cities in the Northeast and the Midwest. It gets the kids who dream of being in a rock band. But the city has also drawn well-educated young professionals

"Talent is becoming more concentrated in some cities and moving away from other cities," says Joe Cortright, an economist standing in the rain at the food cart.

Twenty years ago, the percent of people with college degrees in Portland was lower than the national average. Now, it's more than 10 points higher — about 40 percent. And Cortright says the grads aren't just coming for high-tech jobs.

"People in the Portland metropolitan area are more likely to be engaged in almost any form of outdoor recreation," he says. "We have more microbreweries than any other city in the United States."

Turns out the stereotypes about Portland are largely true.

"I do a lot of homebrewing and I've got an amazing number of folks who are into that scene," says John Sterm, a young attorney grabbing food at a Korean food cart. Sterm moved to Portland from Oklahoma.

"Biking to work and knowing that so many of my friends and peers are in that community and that culture is great," he adds. 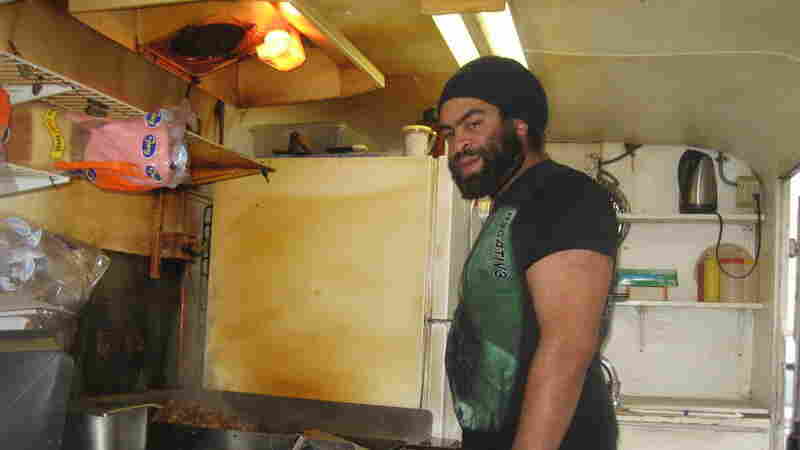 Quentin Gardiner works the grill in a food cart in downtown Portland. Gardiner, who is from Binghamton, N.Y., says he moved to Portland for the heavy metal rock scene. Amelia Templeton/NPR hide caption 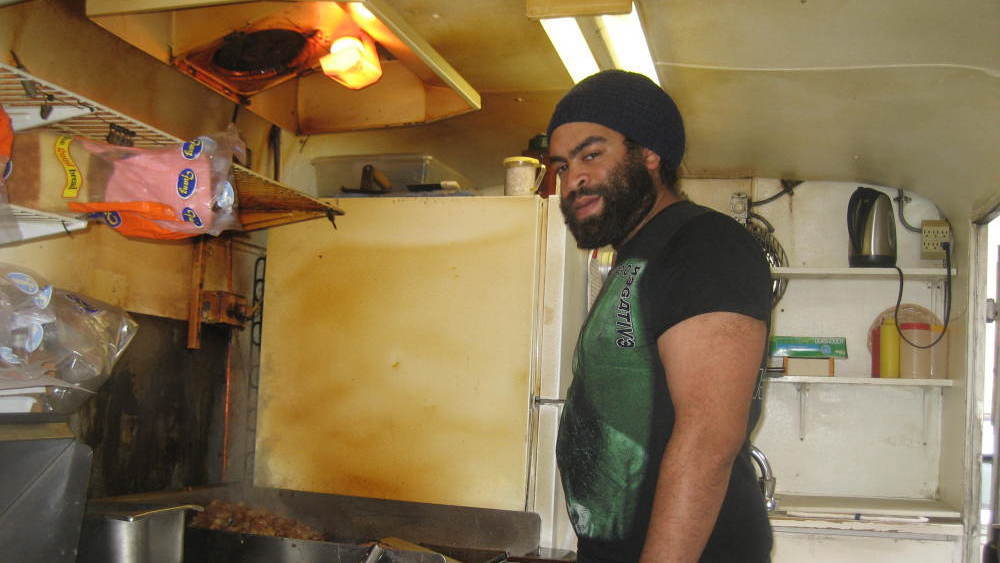 Quentin Gardiner works the grill in a food cart in downtown Portland. Gardiner, who is from Binghamton, N.Y., says he moved to Portland for the heavy metal rock scene.

Oregon economist Christian Kaylor says he can think of only one explanation for the migration into Portland: the quality of life.

Kaylor says wages there are sometimes 20 percent lower than in Seattle or San Francisco. But people keep coming. In fact, Portland's appeal is part of why the city's unemployment rate tends to be about a point higher than the national average.

"In recessions, Portland tends to see population growth, even as we lose jobs," Kaylor says. "So one of the reasons we have that higher unemployment rate is because people do continue to move here even as jobs disappear."

Kaylor says the city's strong brand as a livable place makes it more attractive to companies, too.

Recently, Sun Microsystems was trying to decide whether to close a plant in Portland or in California's Silicon Valley. The company asked employees from both places if they would relocate.

"And the responses were night and day," Kaylor says. "The skilled California workers they wanted to keep were enthusiastic about relocating their families to the Portland area. The Portland employees who were skilled indicated that they would quit rather than relocate in the Bay Area."

Final score: One more high-tech plant for Portland, one less for Silicon Valley.

While Portland companies have a great pool of talent to draw on, it's not a diverse pool. Portland is still about 80 percent white. There are historical reasons for that.

Oregon voted to outlaw slavery, but for 75 years voters also banned blacks from moving there.

During World War II, thousands of African-Americans came to Portland to work in the booming shipyards. But in 1948, the Columbia River flooded and permanently destroyed the neighborhood where the shipbuilders lived.

Today, jobs that offer a livable wage are not in ships, but rather in chips and sneakers — Intel and Nike.

Enrique Washington helps these large firms recruit minority candidates. He says his clients want a diverse staff to help them innovate and connect to consumers.

"The more diverse culture you have, the better your stock prices do," Washington says.

Washington says Portland is slowly growing more diverse. There's a lot of international migration, and about 10 percent of the city is Hispanic. But he says minority recruits worry there's not a strong community to raise their children in if they relocate to Portland.

Cities such as Portland that don't have much diversity to start with struggle to attract it.

Back at the food carts, Gardiner, the half-black rocker, says Portland's whiteness doesn't necessarily bother him.

It all depends on your frame of reference, he says. Portland may be only 6 percent African-American, but Gardiner says he's lived in whiter places.

"So to me it's actually got a pretty reasonable-size black community. I can look down this street and I can spot a black person somewhere," says Gardiner, who then points out a black person.

But Gardiner, who is from New York, says there are other kinds of diversity he'd like to see more of in Portland. "Honestly, I miss the Italians and the Jews more out here than I miss the blacks," he says.

If you are considering moving here, Gardiner's heavy metal band is looking for a drummer.

Touring Portland As It Prepares For Its Moment In The Comedy Spotlight Jan. 21, 2011