Accessibility links
The Nation: Debunking The Deficit Hysteria In a CBS poll taken toward the end of last year, 56 percent of Americans said creating jobs was their top priority for the new Congress, while only 4 percent cited the deficit. Yet, as Ari Berman of The Nation argues, Washington is giving too much attention to cuts and not enough to the 9 percent unemployment rate.

The Nation: Debunking The Deficit Hysteria

The Nation: Debunking The Deficit Hysteria 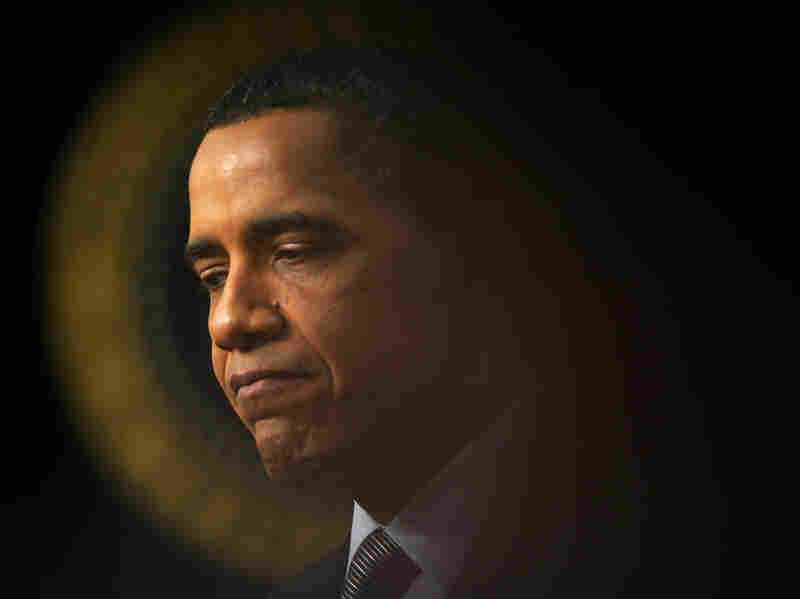 U.S. President Barack Obama pausing during a news conference on Tuesday, where he spoke on various topics, including his budget proposal for 2012 — a highly debated issue. Some argue that Washington is focusing too much on budget cuts, and not enough on job creation. Alex Wong/Getty Images hide caption 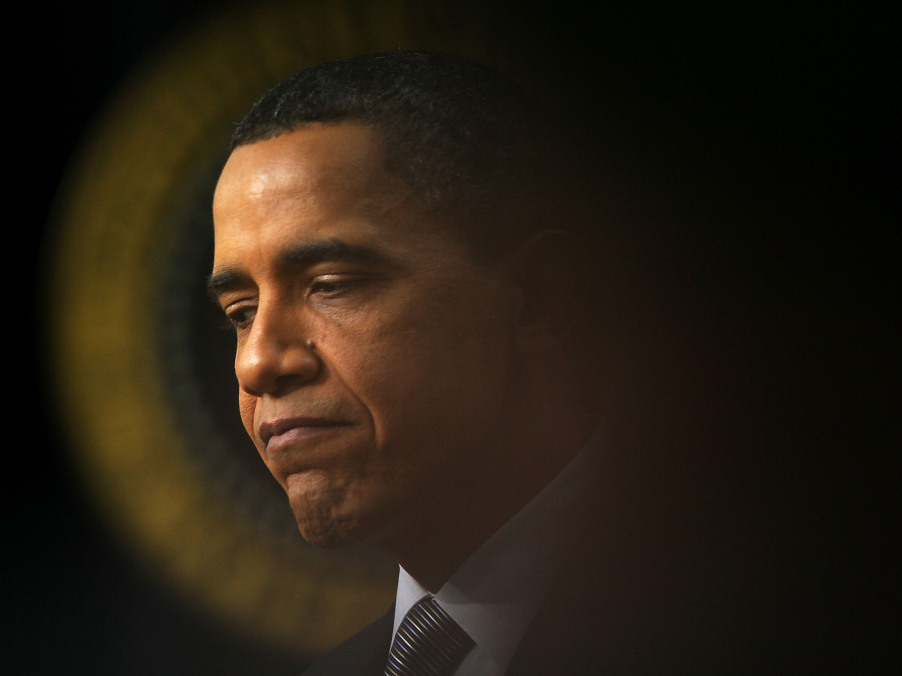 U.S. President Barack Obama pausing during a news conference on Tuesday, where he spoke on various topics, including his budget proposal for 2012 — a highly debated issue. Some argue that Washington is focusing too much on budget cuts, and not enough on job creation.

Obama's budget rejects the steep cuts advocated by Republicans and his deficit commission. But the president is still playing on the GOP's turf by emphasizing cuts instead of jobs.

One example of the public point of view: in a CBS News poll immediately after the 2010 election, which supposedly resulted in a Tea Party mandate, 56 percent of Americans ranked the economy and jobs as their top priority for the new Congress, while only 4 percent named the deficit. In mid-January, CBS News and the New York Times once again asked: "Which of the following do you think is the most important thing for Congress to concentrate on right now?" Forty-three percent of Americans chose job creation, compared to 14 percent for the federal budget deficit. Perhaps the administration possesses polling showing that moderate Republican soccer moms in Cincinnati prioritize the deficit above all else, but the rest of the country does not.

Yet the only thing anybody in Washington wants to talk about are cuts, cuts, cuts. As I wrote yesterday, it's astonishing that at a time of 9 percent unemployment, neither party is laying out a roadmap for how to put people back to work and lift the country out of its economic morass. Someone is going to get punished in 2012 for this. Don't say we didn't warn you!

My colleague Chris Hayes laid out the case against deficit-mania in a Nation article last year entitled, "Deficits of Mass Destruction." Wrote Chris:

Nearly the entire deficit for this year and those projected into the near and medium terms are the result of three things: the ongoing wars in Afghanistan and Iraq, the Bush tax cuts and the recession. The solution to our fiscal situation is: end the wars, allow the tax cuts to expire and restore robust growth. Our long-term structural deficits will require us to control healthcare inflation the way countries with single-payer systems do.

In his press conference today, Obama said that our current deficit is the result of "a series of decisions over the past decade." What he didn't say — and should have — was that it's almost entirely George W. Bush's fault. Bush inherited a record surplus and passed on to Obama a record deficit — the product of giant tax cuts for the rich in 2001 and 2003, a needless war in Iraq and an aimless quagmire in Afghanistan, a drastic expansion of Medicare designed principally to benefit the health insurance industry, and an economic crisis spurred on by reckless speculation and non-existent regulatory enforcement. Yet by appointing a conservative Republican and a corporate Democrat to head his deficit commission, Obama empowered the deficit hawks who wrongly claim that both parties are equally to blame for the current deficit, and who disturbingly advocate cuts to Social Security, Medicare and Medicaid as the only "responsible" long-term solution. Already the conventional wisdom in Washington posits that Obama's budget did not cut enough. At Obama's press conference today, only April Ryan of American Urban Radio asked the president whether such cuts would imperil the country's path to economic recovery.

Where is the alternative economic vision? As Paul Krugman noted yesterday, the president "has effectively given up on the idea that the government can do anything to create jobs in a depressed economy. In effect, although without saying so explicitly, the Obama administration has accepted the Republican claim that stimulus failed, and should never be tried again." Obama can spend all the time he wants talking about the deficit and working with Republicans to try to lower it, but if his administration continues to be AWOL on job creation, it's not hard to figure who'll get the blame for ignoring what the public so clearly wants.