Accessibility links
Union Changes In Wisconsin Spark Protests Thousands of protesters again descended on the state Capitol to oppose a budget proposal by Republican Gov. Scott Walker. Walker wants to strip government unions of most bargaining rights, a move he says would help bring public sector benefits in line with the private sector. 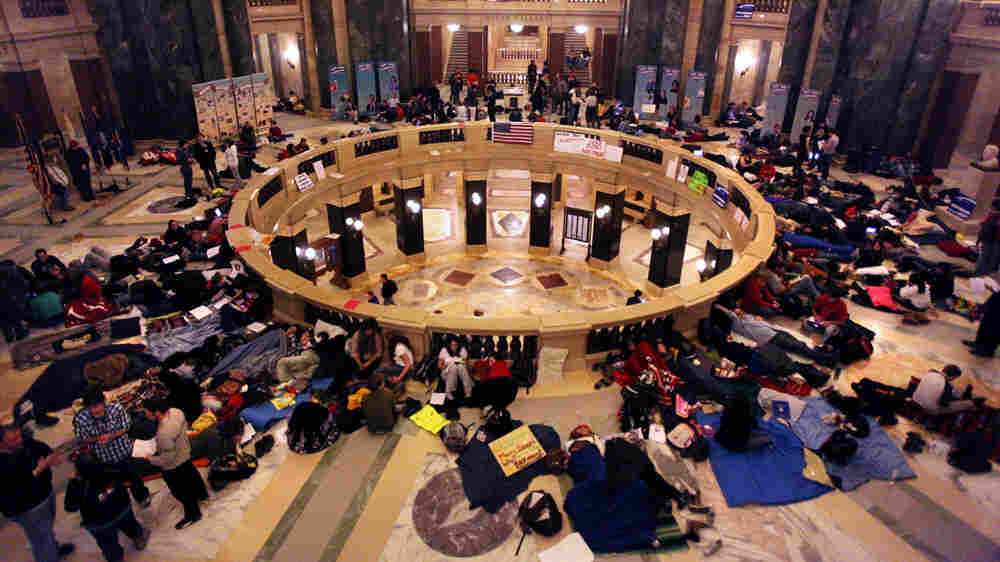 People in sleeping bags hold a vigil at the state Capitol as testimony at a hearing on the budget continues into the wee hours on Wednesday. Craig Schreiner/Wisconsin State Journal hide caption

In Wisconsin on Wednesday, thousands of protesters again descended on the grounds of the Capitol to oppose a budget proposal by newly elected Republican Gov. Scott Walker. Walker wants to strip government unions of most bargaining rights, a move he argues would help bring public sector benefits in line with the private sector.

All week, workers have flocked to the Capitol in giant waves of protests. On Wednesday, they were rallying on the Capitol lawn and picketing the streets on the Capitol Square. Crowds numbering as many as 13,000 have at times shut down traffic. Unions contend that Wednesday's crowd is closer to 30,000.

So many Madison public school teachers called in sick Wednesday that the district closed down.

Inside the Capitol, protesters in the hallways and rotunda chant "Kill the bill." The measure would patch a $137 million hole in the state's current budget, but in the process, it would rework collective bargaining laws that were written 50 years ago.

A public hearing on the measure that started at 10 a.m. on Tuesday lasted until 3 a.m. Wednesday, when lawmakers shut it down even though people were still waiting to speak.

"It's just getting bigger and bigger because they know that this is an assault on all workers. This is not just an assault on the people who work for the state," Kennedy says. 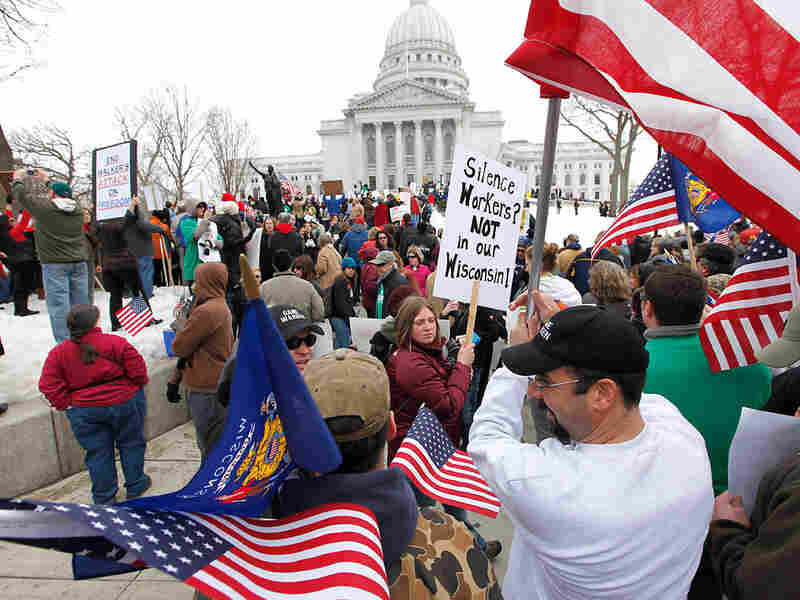 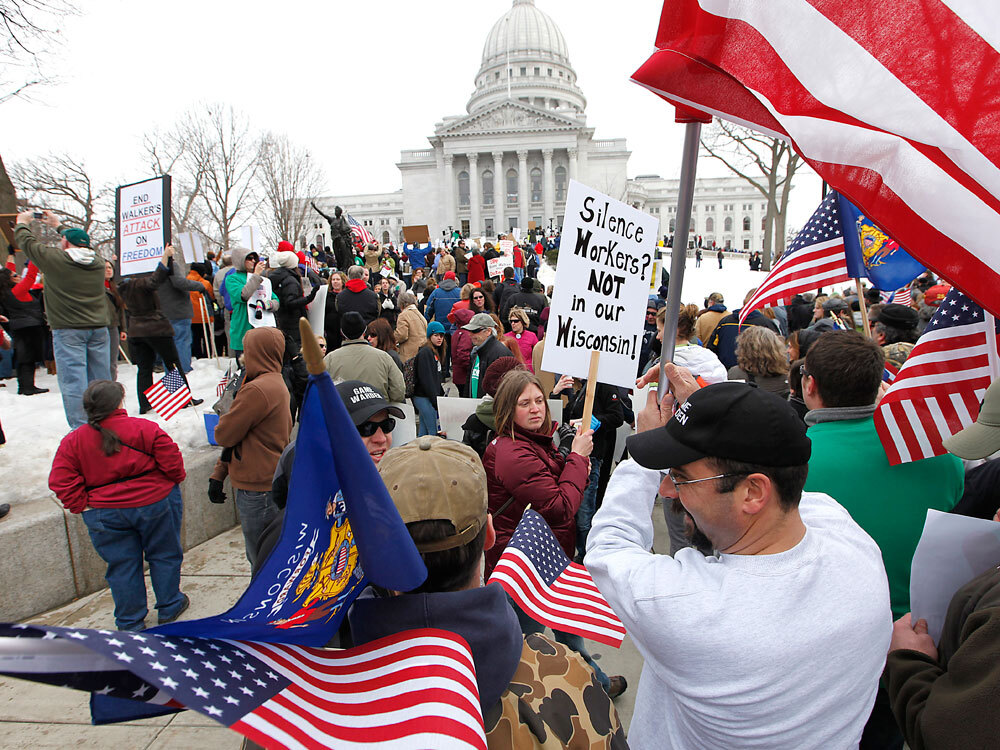 Demonstrators gather on the grounds of the Wisconsin state Capitol building on Tuesday.

Walker and his supporters frame the issue much differently. Walker campaigned on bringing public employee benefits in line with the private sector. Right now, most state workers, including employees of Wisconsin Public Radio, pay next to nothing toward their pension, and have favorable rates for health care. Walker proposes what would amount to about an 8 percent pay cut for workers. He calls it a modest proposal.

"When people look at this, particularly for people outside of government, they look at this and say this is a pretty good deal," Walker says.

It's also a place that governors in other states are looking to find savings as they face crushing budget deficits.

But it's the other part of Walker's plan that's stirring unions here into a frenzy: He wants to eliminate the right of government employee unions to bargain for health care and pensions, and limit their ability to bargain for wages. Walker says bargaining would be pointless — the state has nothing to negotiate.

But many union members just don't buy that. Susan Williams works for the state's health department.

"He is using this budget repair bill as an excuse to break our union, which is what he's wanted to do all along," Williams says.

State clerical worker Mike Lowery goes further, calling it a war on unions. He points to provisions in the governor's plan that would ban public employers from collecting union dues and forcing unions to hold annual elections to re-certify themselves. Lowery says that what's happening here has national implications.

"If they can do it to people in Wisconsin, with its historic working-class roots, it can be done anywhere," Lowery says.

Gary Chaison is an expert on labor relations at Clark University in Massachusetts. He says New Jersey Republican Gov. Chris Christie has made a name for himself by talking tough with unions. But Chaison says what Walker is doing here goes beyond that.

In Wisconsin, Republicans control the Legislature, and the bill could pass quickly, though unions say some GOP lawmakers are now backing down. Even if unions win this fight, the consequences could be dire. Walker says it could lead to the layoffs of thousands of state and local employees.