Accessibility links
Broadway Box Office: 'Spider-Man' Shrugs Off Critics' Venom, Tops 'Wicked' Attendance Need more proof that nobody listens to critics? Both attendance and box-office figures were up in the week after reviewers went all Doc Oc on the Julie Taymor extravaganza. 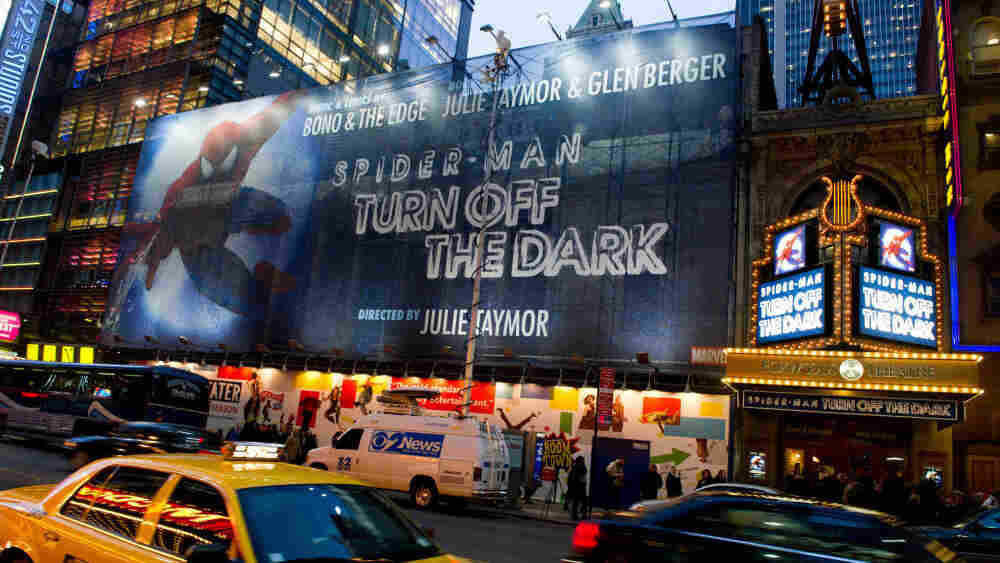 Routing the supervillains? Most reviewers may have been as aggrieved as the Green Goblin, but Spider-Man snared a substantial audience last week nonetheless. Charles Sykes/AP hide caption

As if further proof were needed that nobody listens to critics, both attendance and box-office figures have been up for Spider-Man: Turn Off the Dark since it was hammered with uniformly terrible reviews a week ago.

How terrible? The Washington Post called it "a shrill, insipid mess." The New York Times said it "ranks among the worst musicals ever to hit Broadway." (Actually, the Post said something like that too.)

So what happened? According to Broadwayworld.com, which reports weekly attendance and box-office figures, in the seven days after the negative reviews appeared, Spider-Man's take went up $32,731 (about 3 percent) to $1,330,014. The only show to top that number was the long-running, perennially packed hit Wicked.

Spidey's attendance, meanwhile, shot up almost 9 percent, to 93.6 percent of capacity — and it's playing in the Great White Way's largest theater. That meant Spider-Man played to more patrons than any show on Broadway last week, including Wicked.

(For the record, Broadway had a generally good week: Attendance was up overall by 7.8 percent. With Green Day's Billy Joe Armstrong stepping into a role in American Idiot, that show popped up more than 22 percent, accounting for a lot of that increase. Still, Spider-Man was up more than most shows, and has consistently topped 80 percent of capacity since it started previews in November.)

Just as significant, the web-slinger apparently hasn't been relying on the half-price TKTS booth in Duffy Square to fill those seats: The average price paid by patrons for a ticket to see Spidey fly over their heads last week was $92.05, an average exceeded by only four of Broadway's 22 shows — Wicked, The Lion King, Jersey Boys and The Merchant of Venice. (That last is a limited run starring Al Pacino, and playing to SRO houses at seven rather than eight performances weekly).

In short, the producers — unlike the creative team, which is still working on the show prior to its long-delayed official opening on March 15 — won't be climbing the walls just yet.